Richard Nahem checks out some of France’s unique themed hotels, from high-end, super-cool hideaways in Paris to quietly quirky retreats in the provinces.

The idea of a themed hotel used to conjure up ideas of a Disney-like atmosphere or an outrageous fantasy with over-the-top and often tacky décor and amenities. Today’s themed hotels are an entirely new breed, more like concept hotels which cater to a clientele in search of something unusual, away from the cookie-cutter rooms of many standard hotel chains. Some project a personal passion the owner wants to share with like-minded guests; for others, it’s about a theme that’s directly connected to the place. We have gathered a list of four unique concept hotels which breathe new life into the saturated Paris hotel marketplace.

Nathanael and Elisha Karmitz grew up immersed in the world of cinema. In 1974, their father, Marin Karmitz, created the successful MK2 cinema chain throughout France, which screens independent and international films, plus a film production and distribution company. The brothers are now extending their father’s legacy by pushing the boundaries of cinema with exciting, new projects. In March this year, they launched the first hotel solely dedicated to film, MK2 Hotel Paradiso, located in the non-touristy, mostly residential 12th arrondissement, minutes from the Nation metro and train station.

The hotel has 34 guest rooms and two cinema suites, which have a contemporary décor in soothing jewel tones of sapphire blue, purple, mustard and ruby, along with vintage movie posters from the family’s private art collection. Each room is designed to show films from a laser projector on a 9ft-wide wall screen. Guests can select from a vast range of films from the hotel’s film library in addition to having access to movie platforms such as Netflix, Canal Plus, Mubi, and Disney, all with a flick of a button on a specially-designed tablet – they can order room service meals and snacks on the same tablet. After the guest chooses their film, the curtains close and the lights are dimmed automatically.

A special feature of both cinema suites is a separate, private screening room that seats up to eight people, so clients can invite guests to watch movies. The suites, located on the top floor of the seven-storey building, have terraces with panoramic views of the Eiffel Tower and Sacré-Cœur in Montmartre. The standout feature of the hotel is two customised murals created by superstar French artist and photographer JR, which are displayed on the walls of a building opposite the hotel. The murals measure 50ft high and 10ft across: one is a replica of a still from Charlie Chaplin’s 1921 classic, The Kid, and the other is the iconic Hollywood image of Harold Lloyd dangling from the hands of a clock from the 1923 film Safety Last!.

The cosy café on the ground floor is a branch of Bob’s Juice Bar, and the menu offers comfort foods such as American-style breakfast, bagels, savoury lunch bowls, sandwiches, and fresh organic juices.

In a parallel story to the Karmitz brothers, 26-year-old Charlotte Gomez de Orozco is continuing her family’s hotel business. Gomez de Orozco is part-Mexican and part-French, and has grown up living in Mexico City and Paris. After discovering yoga a few years ago, which immensely altered her life, she decided to commit herself to a life of well-being. Her family owns a small chain of hotels in Paris, and in a move to further her passion, she took over a newly-purchased hotel on the cusp of Montmartre and Pigalle in the 9th arrondissement and turned it into her pet project. The goal of Hoy (which means ‘today’ in Spanish), a combination hotel and urban wellness retreat, was to create a unique offering by breaking the traditional mould of luxury spa hotels and treatment centres.

Hoy Hotel has 22 rooms and suites that convey a calm, serene atmosphere. Each room contains a wall-mounted, wooden bar for stretching, with an attached booklet with specific exercises, and a yoga mat. Although the design of the rooms is simple and straightforward, much thought has gone into every detail, especially concerning the environment. The hotel has a zero-waste policy, which includes no paper in the rooms, the use of organic paint, and reusable bottles. Other touches in line with their policy include rooms hand-painted by local artists, Paris tap water filtered with Japanese binchotan charcoal and dispensed in a glass carafe, organic bath products, towels and bed linens made in France, and a natural air purifying system. In an attempt to lessen the digital demands of everyday life, there are no televisions in the rooms. On the second floor is a series of eight private wellness studios, where clients can receive holistic treatments such as Reiki, and a yoga studio with classes that specialise in a Japanese method in which the studio is dark and uses infra-red lamps.

At the entrance to Hoy Hotel, you are welcomed to a garden of earthly delights with La Floreria, a flower boutique created by Chiaki Kokami, who intertwines fresh and dried flowers, paint and natural materials to assemble one-of-a-kind arrangements. The hotel offers flower-arranging workshops with Kokami.

Serenity is all at the Hoy © thesocialfood 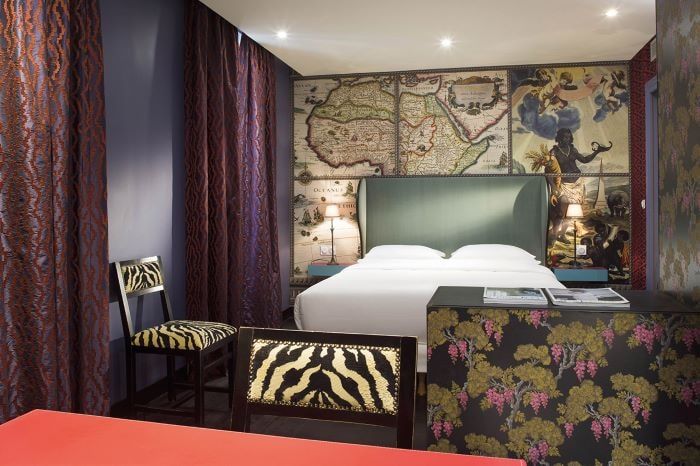 A bedroom at the Hôtel du Continent © Romain Ricard

Former fashion designer extraordinaire Christian Lacroix has refocused his artistic talents by putting his design footprint on a number of Paris hotels. Hôtel du Continent is a fantasy-themed project where Lacroix was given free rein to design 25 rooms based on the five continents and the North and South Poles. 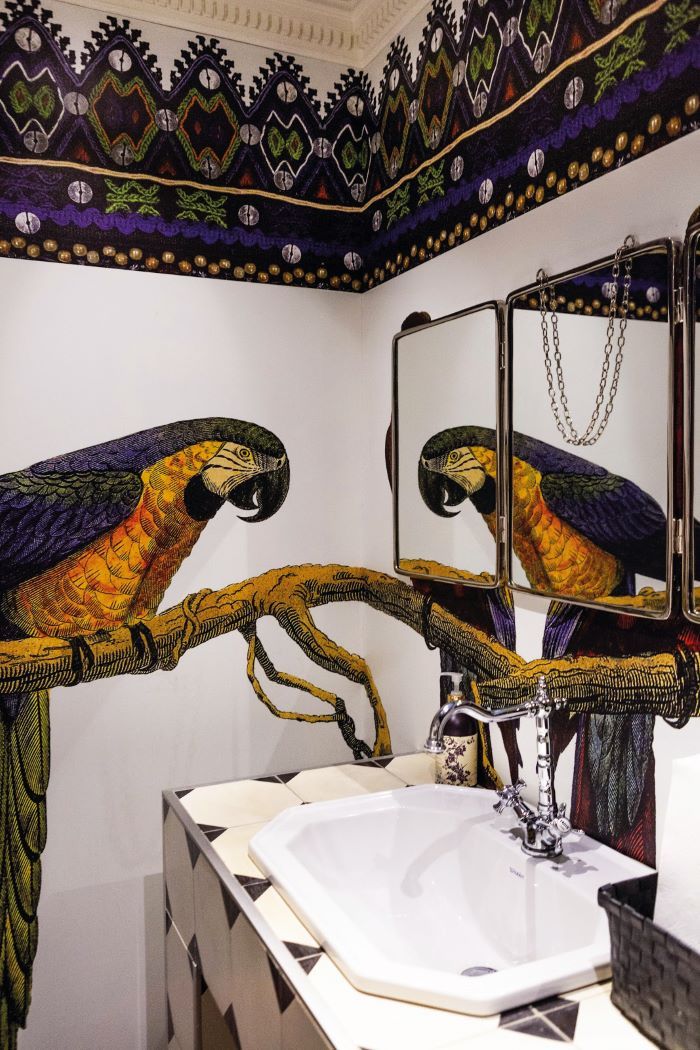 A feathered friend at the Hôtel du Continent © Romain Ricard

The jewel-box sized rooms, which measure 10m2 for a single room and extend to 31m2 for a junior suite, have a rich and exotic mix of rare objets, textured wallpapers, map and atlas print wall coverings, vintage and contemporary furniture and eclectic fabrics, all in the distinctive Lacroix style.

Bathrooms have either bathtubs with showers or showers only and have multi-coloured wall tiles and marble sinks. Other amenities include a bathrobe and slippers, mini-bar, bath and body products by Gemology, and air conditioning. 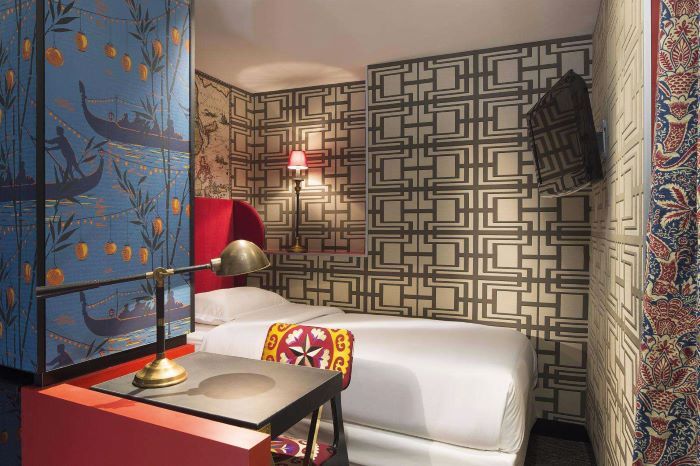 Hôtel du Continent is centrally located on a quiet side street in between the Tuileries and the rue de Rivoli, and is just down the street from Le Soufflé restaurant, the designer shops of rue Saint-Honoré, and a branch of Pierre Hermé. Another draw is the hotel’s reasonable rates, which start at €130 per night for a double room. 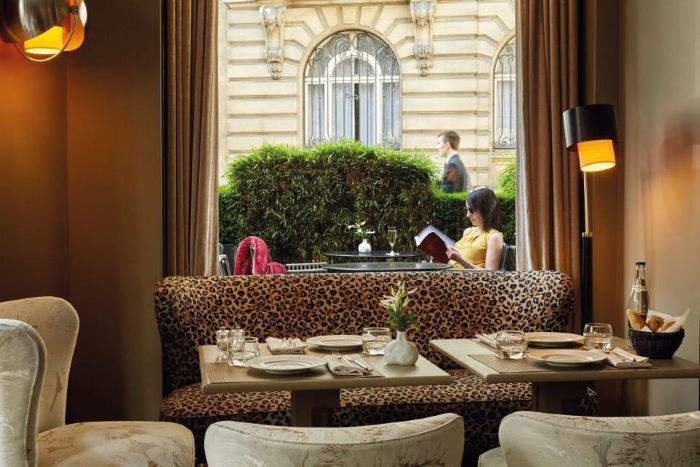 Le Pavillon des Lettres knew what theme it wanted to convey when it chose to have exactly 26 rooms. Each room represents a letter of the alphabet and a name of an historic writer or poet, including B for Baudelaire, H for Victor Hugo, Z for Emile Zola, and S for Shakespeare, making the hotel a whimsical and clever exploration of literature. Located in a quiet area of the usually busy 8th arrondissement near the Elysée Palace, Le Pavillon des Lettres is just 20 minutes on foot from the Champs-Elysées, the Louvre and Le Grand Palais. Interior designer Didier Benderli has combined old-world elegance with contemporary comfort to cleverly fuse literature, painting, sculpture and design into this stunning four-star hotel, which exudes a quiet luxury. 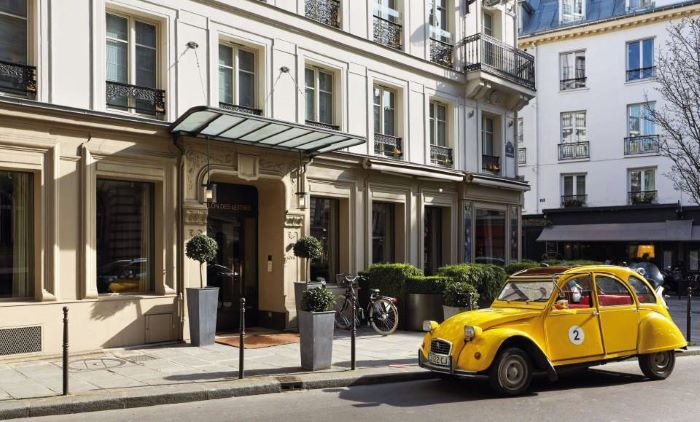 Le Pavillon des Lettres is located in a rare quiet spot in the 8th arrondissement © LePavillondesLettres.com

The compact but stylishly appointed rooms, measuring 17m2 for the superior rooms to 25m2 for the junior suites, are decorated in soothing neutral shades of grey, taupe and forest green, cheered by the occasional few splashes of red and pink. Some words by the room’s chosen author are subtly stencilled on the wall behind the bed and, in a few cases, on the bathroom mirror. Rooms also include air-conditioning, Codage bath toiletries, a turn-down service, in-room safe and mini-bar. 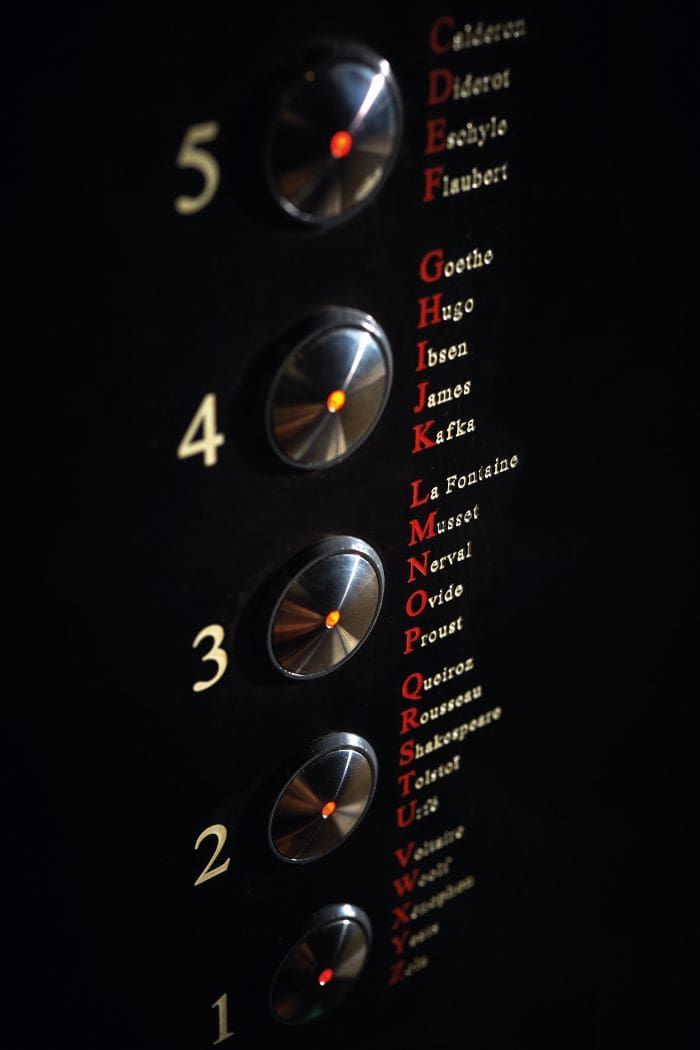 The hotel’s lift shows its literary room names, each starting with a different letter of the alphabet © LePavillondesLettres.com

The Salon is an intimate place to have your breakfast, a drink from the honesty bar, or a complimentary tapas plate served from 5pm to 8pm. In the warmer weather, the Salon has an outdoor terrace.

UNIQUE ADDRESSES IN THE PROVINCES 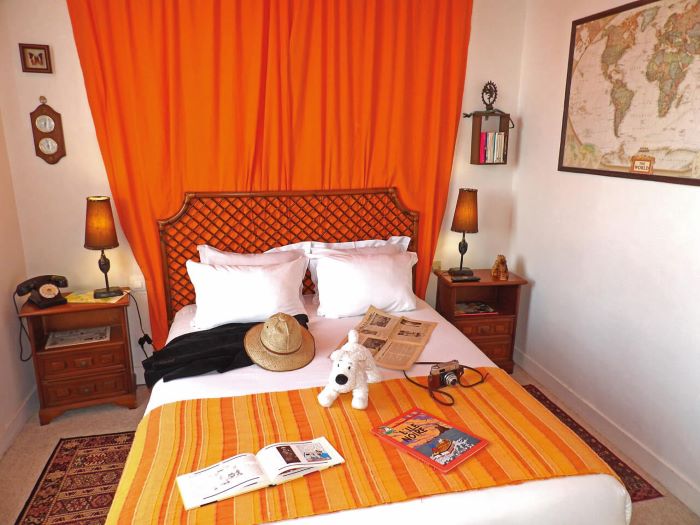 The Detective Hotel, in the seaside village of Étretat, known for its iconic cliffs immortalised by Monet, gives the most famous detectives in literature, films and television a room of their own. Sleuths such as Columbo, Inspector Clouseau, Emma Peel, Hercule Poirot, Sherlock Holmes, Miss Marple, and even Charlie’s Angels are each cleverly represented in the individually decorated rooms. 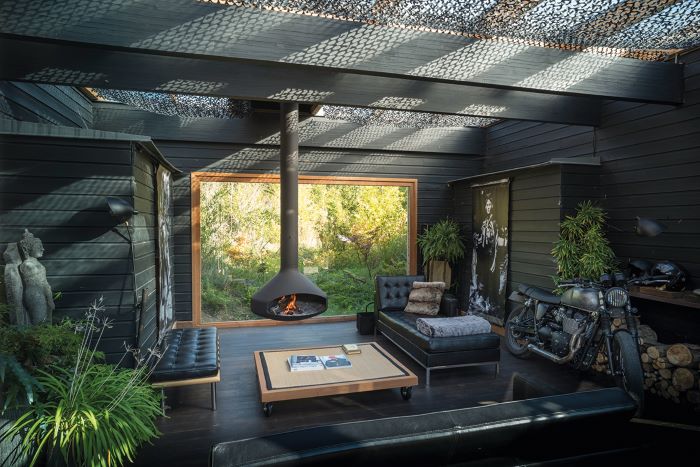 Le Bruit de l’eau literally means the sound of water. The Japanese-inspired hotel has four ecologically responsible cabins each with a different purpose: Étoile, where you can see the stars; Haiku, floating on an island; Rivages, an oasis surrounded by water and trees; and Suite Naoshima, which connects Zen and nature with a private garden. Located in a forest 2.5 hours from Paris and Lille, Le Bruit de l’eau has a Japanese restaurant which sources much of its ingredients from the hotel’s own potager, and a wonderful wood-fired hot tub in the forest. 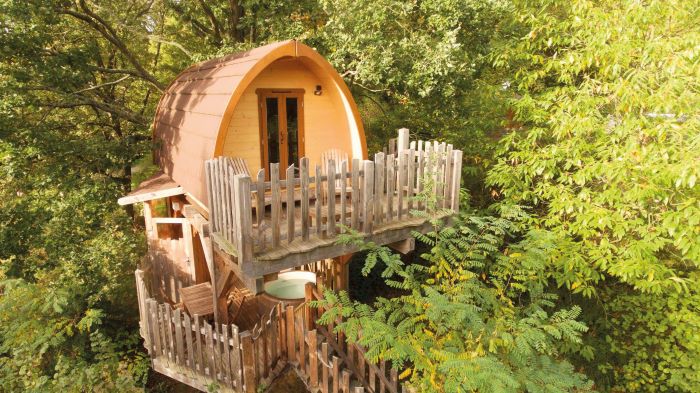 Le Bois de Rosoy embraces the growing trend in recent years for city dwellers who want a bit of nature without roughing it too much – glamping. This campsite, just 90 minutes from Paris, offers accommodation in treehouses in a calm forest. The treehouses include a romantic getaway for couples, another for families, and the last category, a chalet with an in-room jacuzzi. An outdoor swimming pool, a pétanque court, a children’s playground, and a sauna are located in the grounds. Other activities and sites nearby include horseback riding, theme parks Astérix and Disneyland Paris, fishing, historic châteaux, and canoeing and kayaking.