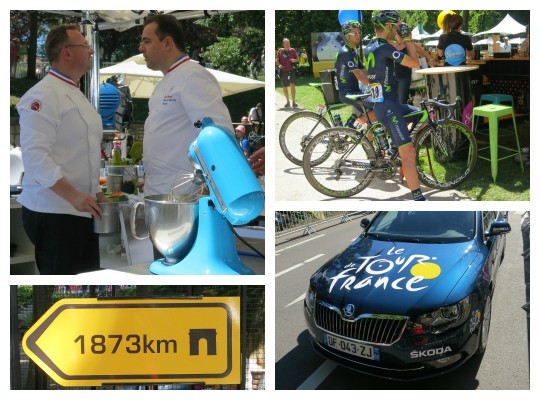 With just 15 minutes to go before the start, something stopped me in my tracks. Two men clingwrapped in lycra and pointy helmets were sipping coffee sitting on their hi-tech bikes at one of the hospitality booths in the departure village. Wait a minute, shouldn’t you be somewhere else right now? Their casual approach to the race made me realize, of course, they are doing this almost every day for a month over 2,276 miles. To misquote Hemingway “the bicycle riders drank much coffee, and did not take the race seriously except among themselves.” The laid back attitude of everyone involved was one of the surprises of my backstage glimpse of Le Tour.

Here I was, a philistine at one of the greatest sporting events in the world. Having caught spots of the Tour de France in the media with passing interest I had always been puzzled at what would possess people to wait for hours on the side of the road just to see the race whoosh past in a split second. Now I know.

The Tour takes you along on a zesty voyage as it shakes hands with the most beautiful spots in France along the way. This was stage 11, a halfway étape before the grueling climbs in the Alps. After a jour de repos the day before, a sparkling morning greeted us in pre-alpine Besançon, in a relatively untraveled corner of the Franche-Comté in Eastern France. Worth a trip in itself, with its UNESCO classed Citadel presiding high above an oxbow of the river Doubs and the Alps rising abruptly to the south, Besançon has a cross-cultural flavour with its proximity to Switzerland and its history of Gaul, Roman, and Spanish domination, all leaving an imprint in the local gastronomy and culture.

There was a Christmas-in-summer mood so special that, ­if only you could bottle it and release it in little doses, therein may lie the solution to world peace. Everybody was getting into the spirit. Parents strolling along with their children, a gendarme smiling and posing for a selfie, girls in bright costumes entertaining the crowd with magic tricks, a demonstration by Meilleurs Ouvriers de France Fabrice Courbet and Romuald Fassenet whipping up fresh local trout with a vin jaune and Comté cheese emulsion. My thoughts turned to the crew, the people that had put this very booth together just this morning, and would be taking it down at noon only to do it again this afternoon at the arrival point. Multiply that by every booth, bus, promotional float, cleaning crew, medical crew, food, drink, sponsors, and the effort is just Herculean. C’est normale. They all went about their jobs as smooth as silk rolling out the logistics with clockwork precision.

It makes sense. If crew and athletes were to get all stressed each time, they would exhaust themselves emotionally as well as physically. So in typical Gallic style they take it in their stride and turn it into a summer-long party. The Tour de France has grown and evolved since it’s first edition in 1903, and is set to enjoy a long and healthy future. I’m sure I was not alone that day feeling a renewed inspiration. As Science educator Bill Nye said,  “Bicycling is a big part of the future. It has to be. There’s something wrong with a society that drives a car to workout in a gym.”