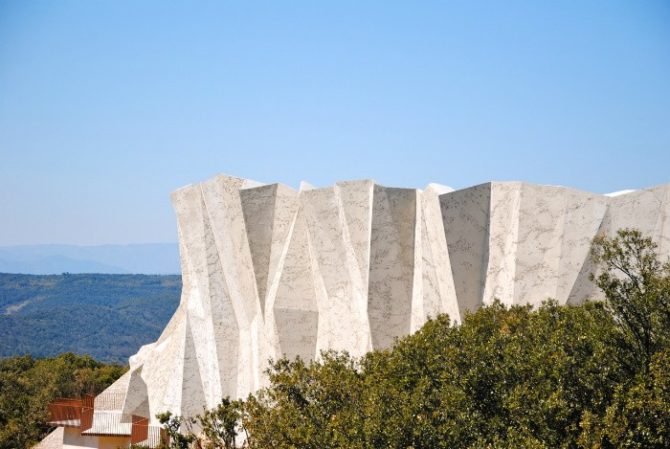 [Editor’s Note: The official name of the destination profiled in this article is now Grotte Chauvet 2- Ardèche]

In peace and war, good times and bad, France has never scrimped in spending on its cultural monuments. The Louvre, Versailles, and more recent additions such as the Pompidou Centre and the Opéra Bastille in Paris have helped give the French an enduring sense of grandeur in their country. This focus on culture has also brought economic benefit. The 80 million tourists who come to France every year make it the world’s most visited country, and their spending accounts for more than 10% of the annual French GDP.

Pascal Terrace, the member of the French National Assembly for the region of Ardèche in the south of France, hopes that a “crazy project” he has promoted – a 55 million Euro recreation of prehistoric paintings found in a remote cave – will become the next big French cultural destination.

My invitation from the Ministry of Culture to attend a media briefing for the Cavern of Pont d’Arc came in both English and French, unusual for a French government document. It promised “exclusive access” to a replica of the cave where a thousand wall paintings of wild animals of the Palaeolithic era were discovered in 1994. They had gone undetected for more than 30 thousand years, and may represent the world’s oldest examples of figurative art.

The Cavern of Pont d’Arc is a collection of glistening white stucco buildings on the La Razal plateau, a mountaintop stretch of scrub and woodland overlooking the village of Vallon Pont d’Arc in the Ardèche River valley, 600 kilometres south of Paris. The main structure, the size of an aircraft hanger, houses an above ground replica of the Chauvet cave where the paintings were found by amateur cavers on a weekend outing. In order to protect the paintings from contamination, the cave is closed to all but a few archaeologists. M. Terasse sees the replica as “an invitation to a journey back in time.”

It is indeed that. You begin the journey in total darkness, on a footbridge that takes you thirty thousand years into history to join the first Homo sapiens who made their way across Europe at the height of the Ice Age, in the last days of the Neanderthals. Dim lights appear in corners of the grotto and the paintings come into view. So realistic are they that you can almost hear the neigh of wild horses rampaging across the plateau, or the snarl of lions about to attack a clutch of bison. Other paintings show in beautiful detail the cave bears, rhinos, snow panthers, and now long extinct aurochs and wooly mammoths that once prowled the gorges of the Ardèche River.

The paintings are the work of early hunter-gatherers, known as Aurignacians after the French village where their presence was first detected. They created the world’s first realistic representations of the mammals with whom they shared the earth  – the first real art. Never cave dwellers themselves, they worked by torchlight with charcoal from Scotch pines they’d burned, and red ochre they’d dug from the earth.

The Caverne in its perfection has raised questions about whether the public is well served by access to a fully replicated cave environment. The Globe and Mail headed its report, Faux Real? Its reporter seemed unsure whether seeing the replica had been “better than nothing” or “the next best thing?” to seeing the actual paintings in the actual cave. A British art critic writing in the Telegraph complained the replica treats art lovers “like fools” and shows contempt for the “anonymous geniuses” who created the paintings. Both concede that because the Chauvet cave has been closed to the public to prevent contamination by toxins or human detritus, films and books offer the only alternatives.

Jean Clottes is widely recognized as a world authority on cave paintings. He is largely self-taught and acquired his Ph.D in archeology after many years as an amateur enthusiast, going underground on his days off as a teacher of English in the Pyrénées village of Foix. He was a lowly paid director of prehistory for the Midi-Pyrénées region for many years, eventually succeeding to a career post as inspector general of rock art for the Ministry of Culture. He has dug more deeply into the meaning of the Chauvet paintings than perhaps any other person.

Now a vigorous 81, Clottes spoke to the assembled media after the briefing at Pont d’Arc. His remarks had a scientific bent and contrasted with those of the politicians present. When I caught up to Clottes, I asked him what it had been like to be the first expert to enter the Chauvet cave.

“I had driven 400 kilometres through a winter storm to get from my home to Vallon-Pont d’Arc. It was December 28, 1994, and I was the only guest in the hotel. The entrance (to the cave) was difficult because, as we found out later, the main entrance has been blocked by a rockslide around 23,000 years ago. We went through a crack in the roof, down a ladder. When I set foot eight metres below, I was dazzled by what I saw. These splendid drawings were made by great artists. Here was work by fully modern minds, capable of abstract symbolic thinking.” Sealed by nature from outside contamination, the paintings “looked as fresh as if they’d been painted yesterday.” Contemporary art experts agree the paintings are remarkable for their perspective, shading and illusion of motion.

Until his retirement in 2001, Jean Clottes headed up the team planning the Chauvet replica. “The public are eager to know about the paintings and see the impressive panels elsewhere than in books or in films,” he told me.

Perhaps there are bigger questions to be asked about the replica than the merit of seeing copies of the Chauvet paintings. The artists of Chauvet were members of the Aurignacian culture, created by the first Home sapiens who reached Europe at the height of the Ice Age. How did some learn to make such wondrous depictions of the mammals that roamed the forests and fields of the Ardeche Valley more than thirty centuries ago? How could they afford to expend energy of making art while struggling to survive in an inhospitable land? Why did they bother?

“Everyone agrees,” insists Jean Clottes, “the paintings are, in some way, religious.” Clottes says he is not himself a believer but that it is “man’s spirituality, with its three branches of philosophy, religion and science, that truly distinguishes us from animals.”

Clottes found himself the epicentre of a raging controversy when he co-authored a book suggesting the Chauvet artists did their work while acting out religious rituals under the influence of shamans. In “The Shamans of Prehistory,” Clottes suggests the artists may have laboured while in a trance induced by religious fervour, drugs or a lack of oxygen. He argues that shamanism “was the most prevalent belief system of hunter-gatherers.”

From this, Clottes concludes that the term Homo sapiens (“man of wisdom”) as applied to modern mankind “is an unfortunate misnomer.” He points out that animals “have all sorts of knowledge and far more wisdom than we– as they do not threaten to destroy their environment and even their own species.”

Our ancestors who laboured by torchlight to produce the cave paintings, Clottes says, would better have been called Homo spiritualis artifex, “for making art was their main characteristic.”

A sad postscript to this story is that at none of the events launching the Caverne du Pont d’Arc, were the people who discovered the cave present. Jean-Marie Chauvet, the parks ranger after whom the cave is named, has been entangled for years in lawsuits with the French government and the owner of the land where the cave was found. Two government officials have been convicted of falsifying Chauvet’s expense records to make it appear he was on official duty when he found the cave; he argues he was on vacation. The legal stalemate seems nowhere near an end.

Ray Argyle is a Canadian author of biographies and popular history. His most recent book is The Paris Game: Charles de Gaulle, the Liberation of Paris, and the Gamble That Won France. He is working on a book on Vincent Van Gogh.

Previous Article Golfing in France – a glossary of terms
Next Article Private Cab Transfert: Taxi Service for Paris, Disneyland, and Beyond