Baguettes and Pastries at the New Maison Kayser in New York 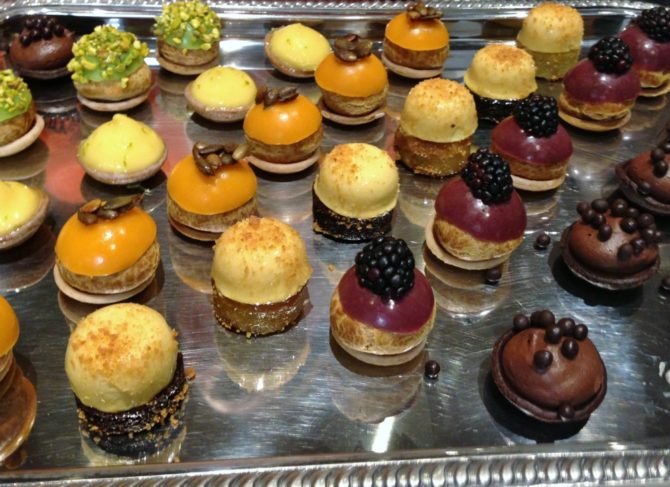 Can we all agree that there’s nothing better than bread fresh from the oven? And if that bread is one of New York’s finest baguettes, fresh out of a very 21st century oven on a dark, blustery November evening, the night the clocks were turned back, then I think it might be possible to survive until spring.

The bread in question was eagerly observed from formation, through its placement on the linen-lined belt, with four strategically placed cuts in the surface, into the brand-new oven, until the transformation into a perfect bien cuit baguette, twenty minutes later. As with most warm bread, it proved irresistible and like most of the baguettes I’ve brought home from the various Maison Kayser shops around the city, it didn’t make it to its destination intact.

They say that new coffee makers make the best coffee, and I’m really not sure that the same could be said for ovens, but this was a pretty spectacular baguette! If I tell you it was a conveyor belt, you’ll think mass production, but it was cutting-edge technology in the hands of artisanal bakers, and fascinating to watch.

We were at the opening party for the most recent Maison Kayser shop, which debuted November 6th on Broadway and 76th Street. Eric Kayser was there, working the crowd, and not looking at all like a man who had just run the New York City Marathon in under four hours (his time was 3:42:23). He got a rousing cheer from the packed bakery when he strolled in.

Like all the other MKs I’ve been in, the staff was happy to ply us with anything and everything from the store. We switched from savoury (butternut squash soup, mushroom tartines, mini croque monsieurs) to sweet (éclairs made from yuzu or blackberry/raspberry) and back again, enjoying every bite.

The hardest decision was what to take home. I was under strict orders from Frank to bring home a baguette and some croissants, which only left all the amazing pastries to choose from. I split the decision with the woman behind the counter, who chose a raspberry tart for me and I picked a dome of coconut with a passionfruit center in my quest to eat through most, if not all, of their desserts. Oh, and a bag of tiny financiers somehow made it in with the rest of the treats.

Anne Maxfield is a New York based food influencer and blogger who dreams of making the South of France her home. When she’s not tracking down cheese or making her own charcuterie, she writes the Accidental Locavore blog and contributes to the Huffington Post. This article is adapted from a post on her blog.