Château de Saint Mesmin: Step into the Middle Ages in the Deux-Sèvres 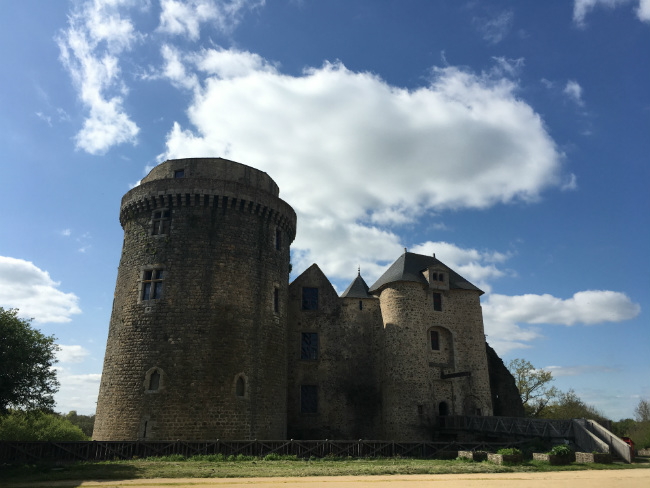 In the springtime, the fields of the Deux-Sèvres in western France are a dazzling patchwork of lush green and brilliant yellow colza. Follow a narrow country lane over a bridge—this little Sevreau stream actually divides the Vendée and Deux-Sèvres departments—and you’ll find yourself at the loveliest castle you’ve never heard of.

Visitors laughing over lawn games and archery; others sniffing the herbs in the vegetable garden; hosts in period costume spilling medieval secrets; a treasure hunt inspiring kids to sprint over the drawbridge… Welcome to the Château de Saint Mesmin. 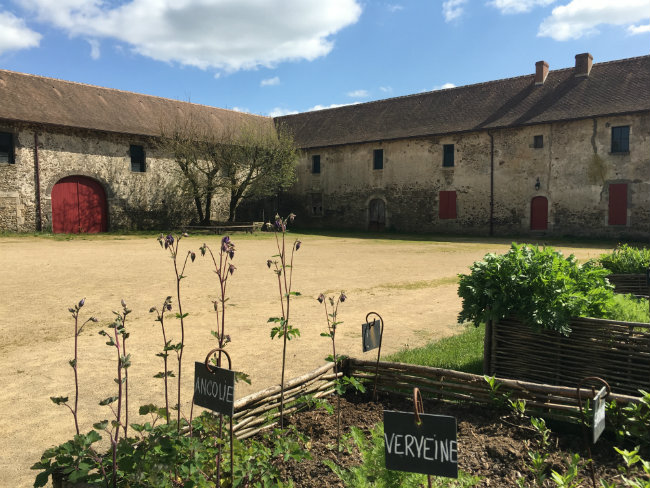 A recent visit over the Easter weekend had me marvelling– yet again– at France’s painstaking preservation of cultural patrimony, understanding and preserving its importance for future generations. In this case, a crumbling 14th century chateau in a relatively untouristed department in France has been lovingly restored. No need to go to a theme park when we have this incredible heritage at our doorstep! 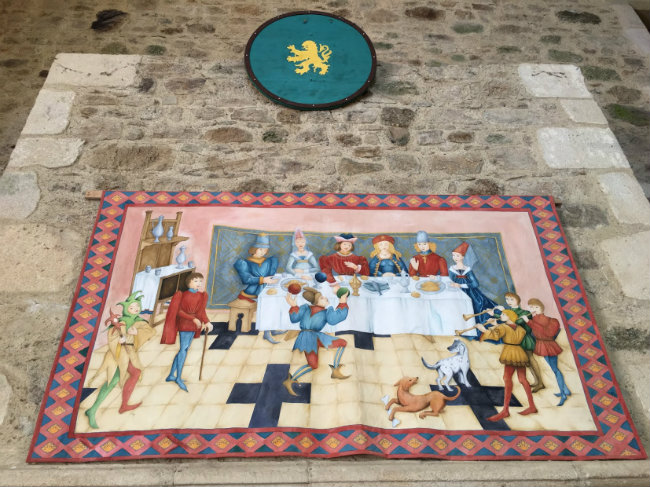 From the kitchen and grand banquet hall to the arms room and upstairs bedrooms (the entire family would sleep together to keep warm!), the chateau circuit imparts fascinating historical anecdotes, sometimes bashing our stereotypes of the Middle Ages. For example—contrary to the popular notion—folks actually bathed regularly. And the hot oil said to have been poured on marauding invaders? It was far too expensive a defensive tool! (Pots of excrement far more effective.) 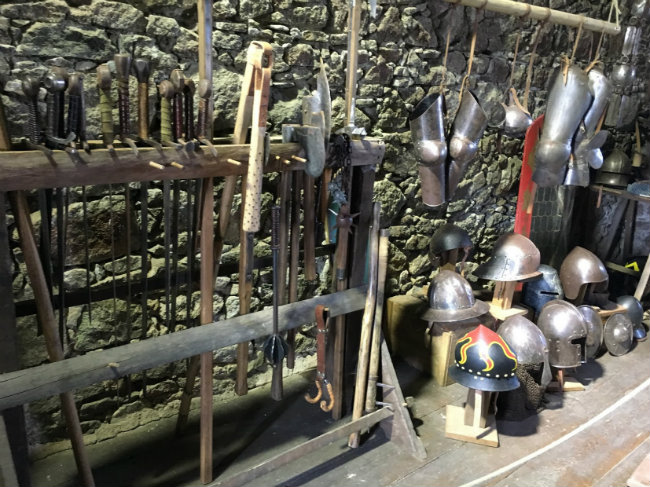 Over the Easter weekend, a number of fun workshops were arranged for children: painting stenciled eggs with the plant-based dyes used in the Middle Ages; story hour shedding light on the traditional Easter feasts of yesteryear; and a riddle-infused treasure hunt resulting in a chocolaty prize hidden in a treasure chest.

Fun and educational at the same time, the Château de Saint Mesmin ignites the imagination. 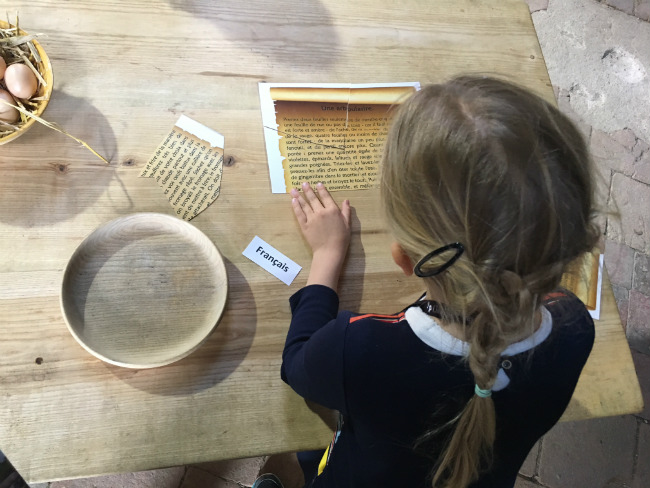 Piecing together a puzzle as part of the Easter treasure hunt

A year-round calendar of events brings the Middle Ages to life. Note that in the summer months (July 9-August 27), the chateau flings open its doors daily— with wonderful weekend entertainment, to boot. (Usually the chateau is only open on weekends.) There is a one-hour lunch closure between 1 pm and 2 pm. It’s best to check the website in advance to confirm opening hours, as they change by season: www.chateau-saintmesmin.com. Address: 79380 Saint-André-sur-Sèvre. Tel: +33 (0)5-49-80-17-62. 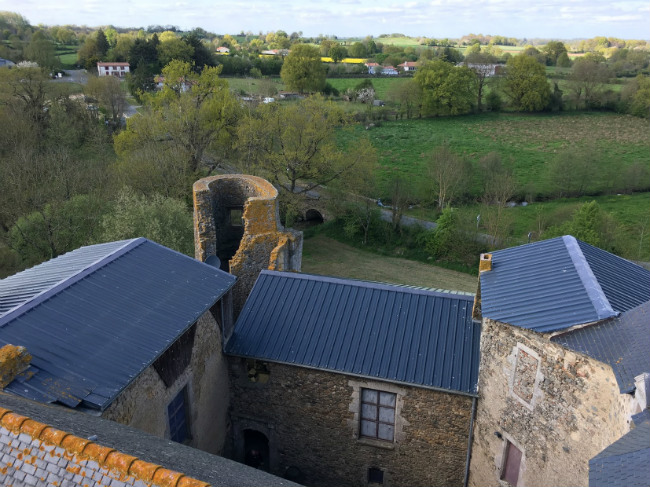 View from the top of the Château de Saint-Mesmin

The chateau was built by Pierre de Montfaucon in 1370. At the time, it was surrounded by a moat filled with water from “le Sevreau” river. In the 15th century, the family fortified the chateau with a keep towering 28 meters high. Over the centuries, other families succeeded the famille Montfaucon, until the residence was abandoned in 1766. The chateau was never caught in the crossfire during the Middle Ages; the only act of war it endured was during the War in the Vendée, when 40 besieged royalists took refuge from the republican army over a four-day period (1796) until their provisions ran out. Sold by the French state to the Proust family in 1818, the chateau then served as a military hospital during World War One. Classified as a historic monument in 1993, the Château de Saint Mesmin is today managed by a mixed syndical council comprised of four different public government agencies: the Conseil Départemental des Deux Sèvres, the Conseil Départemental de la Vendée, la Communauté d’Agglomération du Bocage Bressuirais, and la Communauté de Communes du Pays de Pouzauges. 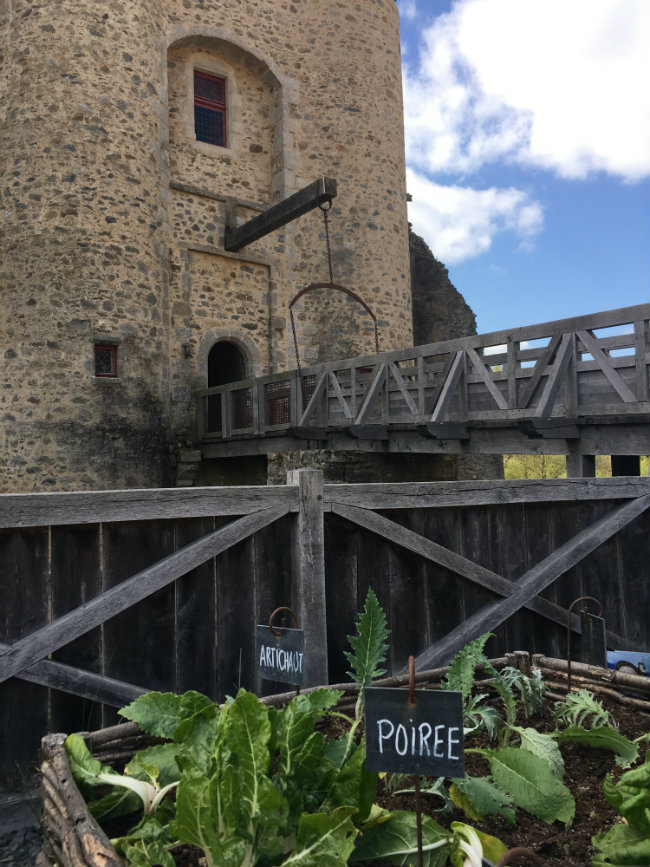 The drawbridge of the Château de Saint-Mesmin