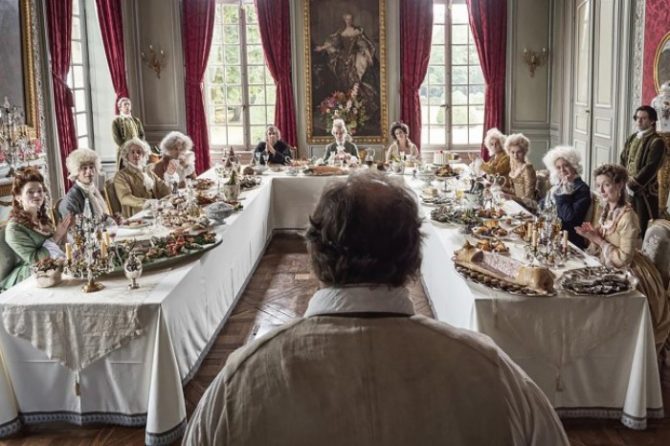 France, at the dawn of the Revolution, the last giddy fling for the greedy and bewigged aristocrats before the world as they know it all comes tumbling down around them.

Talented chef Pierre Manceron (Grégory Gadebois) serves a sumptuous, waistband-busting 40-dish banquet to his master, the prissy and condescending Duke of Chamfort (Benjamin Lavernhe), and his guests. The nobles of this period were bored: left without political power or military might, they indulged in endless debauchery, gorging on food with no real appreciation of gastronomy.

As part of this feast, one of Manceron’s offerings is the ‘Délicieux’, a potato and truffle dish which provokes outrage at the table. His sins? Having the temerity to tinker with age-old recipes and serving up potatoes, food grown underground being considered the devil’s produce (and possibly carriers of diseases such as leprosy).

Director Éric Besnard explains: “At that time, the nobility and the clergy still believed in a celestial scale of food. The more airy they are, the more divine they are; a pigeon is perfect, a cow, closer to the ground, is less so… The potato, however very nourishing, will take a hundred years to establish itself in France.”

Thus Manceron is unceremoniously sacked by the Duke and decides to give up cooking until, with a bit of encouragement from his new apprentice (Isabelle Carré), he embarks on his own revolution. Together, they invent a place of pleasure open to all: the first restaurant.

This warmly comedic movie is a thoroughly entertaining romp through history and as Besnard himself says: “In this movie, where there is almost no action, there is a twist every ten minutes”. Historically, take it with a pinch of salt, though: Besnard uses a touch of poetic licence when he brings together the Revolution and the arrival of the first restaurant. In fact, the first restaurant in France came about in 1782. Otherwise you’ll find it perfectly seasoned, with laughter, tears and adventure in the right measure.