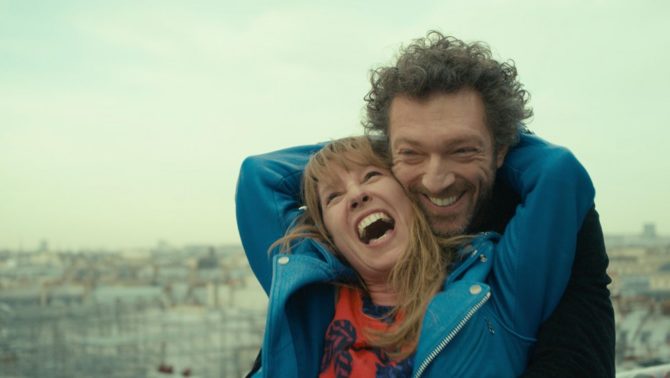 Mon Roi translates literally as My King, and its point of view on relationships seems to be that of one of Henry VIII’s wives. The film was made by the talented actress turned director Maïwenn (she goes by one name), who specializes in the over-the-top emotions of people caught in extreme situations. In Poliss (which won three César awards) she vividly captured the lives of male and female police officers working together in a difficult environment. Here she focuses on one man, Georgio, and one woman, Toni, during a tumultuous relationship that encompasses romance, marriage, parenthood, and divorce.

Framing the story is another narrative line, in which we see Toni (played by Emmanuelle Bercos), now a victim of a serious skiing accident, go through a painful period of re-education for her wrecked knee. It’s a bit reminiscent of Rust and Bone, though not as traumatic. Toni is forced to confront her past, and learn to deal with the rest of her present-day life. She looks markedly different in the physical therapy narrative and in the flashbacks (mostly because Bercos doesn’t wear make-up in the former, and her body is filmed in a cold, clinical way). We get the impression that Toni’s relationship with Georgio (Vincent Cassel) is precisely what led to her ordeal (we see a doctor, possibly a psychiatrist, probing her about the mind-set that led to the accident), which provides a suspenseful interest to get to the bottom of their story.

Toni is the one who originally took the initiative to snare Georgio. She picks him up at a club by mocking him about a technique he uses to pick up women (flicking drops of champagne at them to get their attention). To say that Georgio takes the bait is an understatement. He dazzles Toni with his fabulous apartment, his charm, his carefree hedonism. The straitlaced lawyer Toni loosens her laces, and what used to be called a “whirlwind romance” of two attractive, complementary people begins.

The initial dark lining to Toni’s cloud nine is Georgio’s former lover, Agnes (Chrystèle Saint-Louis Augustin). Agnes is beautiful, a top model (what else?), still attached to Georgio, with ambivalent feelings towards Toni. She’s also unstable, which both necessitates that Georgio take care of her (one wonders why a beautiful woman doesn’t have any other friends), and draws him to her. Worse, it gives him a pretext to take a certain distance from Toni in the midst of their life together.

Agnes aside, it becomes depressingly clear that Georgio blithely wants to live life on his own selfish, narcissistic terms. Toni goes along, then resists, then leaves him and comes back, and winds up breaking down. In a Hollywood film we might discover that Georgio is seriously psychopathic, or that he harbors some dark secret. Happily neither is the case here. Instead of lapsing into easy fantasy, the director sticks uncomfortably close to real life.

Maiwenn, as a former actress, is very effective as a director of actors, at bringing out their emotions. She clearly belongs to the John Cassavetes school of filmmaking, prodding the cast members, or letting them improvise. But the result is often too much laughing and mugging for the camera (an occasional problem with Cassavetes’ films as well). The results seem too much like an improv class or an encounter group session. It’s possible that the characters really are supposed to be like that, but that’s contradicted by another flaw: dialogue that’s too written, too cleverly wise-cracky, too witty.

Despite these reservations, both Emmanuelle Bercos and Vincent Cassel give strong performances. Cassel, who is a sort of French De Niro, is able to be creepy and sympathetic at the same time (his specialty). Bercos has the same vulnerability with verve of Gena Rowlands, John Cassavetes’ favourite actress (not to mention his wife). Sharp counterpoint to the principals is provided by Louis Garrel (as Toni’s brother, Solal) and Isild Le Besco (Maiwenn’s sister in real life) as his wife, Babeth. At first they go along with the folie à deux, but gradually (and well before Toni) they see the extent of Georgio’s destructive side.

One problem with the film is that while it flamboyantly tries to show life close to the bone, it’s curiously ungrounded. Georgio is supposed to be a restaurateur, but we only have one glimpse of the establishment, and that’s just a thrashing sex scene in the kitchen (after he’s shooed away the staff). Otherwise, there’s no sense of his professional life. Toni is a lawyer, but we almost never see her at work. (Until the very end of the film we never get a detailed account of their parenting, either.) Ultimately, Mon Roi is as abstracted from real life as any romantic comedy.

Georgio justifies his manic life by saying that as long as an oscilloscope goes up and down it means a person is alive, while flat-lining means that he (or she) is dead. Vincent Cassel is charming and charismatic enough to almost make us believe that. But whether you call it folie à deux or histoire d’amour fou, so much intense concentration on the two lovers can get tiresome (and just plain tiring). Yet there’s no denying that Maiwenn is a filmmaker who makes the screen pulse with life.

Previous Article Exploring the Limousin Region: The Original “Plus Beaux Villages de France”
Next Article A Pilgrimage to Café Sélect in Montparnasse