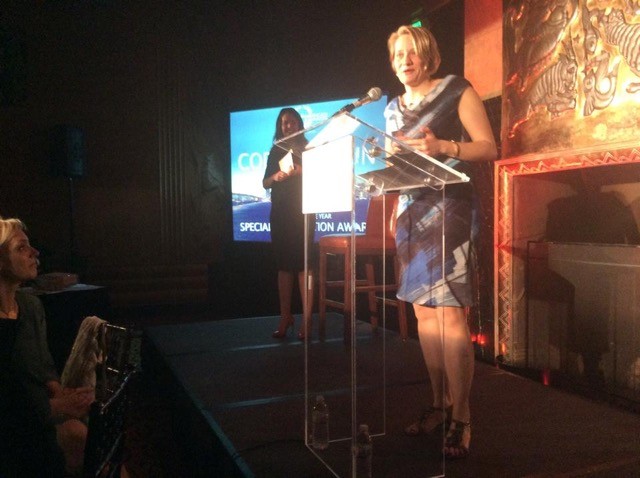 Business and France make strong partners in the San Francisco Bay Area. This link was honored at the French American Business Awards (FABA) at a glittering May 27th ceremony which celebrated and rewarded leading French-American companies, entrepreneurs and executives.

Awards were given in nine different categories ranging from startups in the Bay Area’s high tech and biotech companies, to the almost expected food and wine businesses that were an obvious sharing of technology and viniculture expertise. The French American Chamber of Commerce San Francisco (FACCSF) and the Leaders League Group organized the awards, which, after a rigorous selection process, settled on nominees from 58 companies. From there, the jury chose the Gold Awards and Special Distinction Awards in each category.

What’s the France-San Francisco connection? Each firm must have a French or dual citizen founder, have a French representative as CEO or be a local subsidiary of a French company, except for the “U.S. investment in France” category. The FABA jury selected the winners based on the company’s long-term performance in qualitative and quantitative criteria. This means areas like innovation, revenue and company growth or funds raised. It also means involvement in San Francisco’s French community, plus France’s influence in the Bay Area.

“The San Francisco area is a thriving business community that inspires French entrepreneurs,” said Frederic Stemmelin, President of the Board of FACCSF. “These leaders find a successful path in the US and are energized by the entire French/American community.”

That inspiration takes the form of blending the special characteristics unique to France with those found in the Bay Area.

“I took the inherent strong math background and long-term thinking about telecommunications infrastructure from France and mixed this expertise with the attitude that everything is possible in the US,” said Jerome Lecat, CEO of Scality, the Gold Award winner for the High Tech Over $20 Million in Revenue or Funding category. “The goal is to leverage these different talents.”

Lecat’s reference is to France’s President Valéry d’Estaing who, during his presidency in 1974-81, decreed that France would lead in telecommunications expertise. The result was the creation of the Minitel, a precursor to the Internet, and the ongoing leading technologies of France’s telecoms industry.

The inspiration of leveraging French and American talent was key to Servane Demol, Founder and CEO of Code For Fun, the Startup of the Year Special Distinction Award winner. Code for Fun is a non-profit that exposes young students, especially girls, to computer programming, thus encouraging the next generation of engineers. Although the French education system is strong in technology at the university level, Demol saw a need for the exposure to the pleasures of computer programming concepts in the early school years so students could discover a growing career path.

“When I returned to France, I saw that children were not getting any exposure to an important skill,” said Demol. “I was inspired by that need, which I also saw in the U.S. educational system. So, I took my French-based discipline of broad-based learning and created fun ways to teach the skills of programming using game creation.”

The advantages of the French/American connections work both ways. Intel Corporation was the Gold Winner in the U.S. Investment in France category. Since opening its office in Paris in 1974, the company has created more than 1000 jobs in seven research and development centers in France and has invested in many French companies.

“These partnerships accelerate innovation and local jobs,” said Christian Morales, Intel’s representative at the FABA Awards. “Plus, there’s a social side with shared influence in education, small and medium business creation and the inspiration for entrepreneurs.”

The blend of the advantages of both countries was evident in the enthusiasm of the attendees and pride in their success of creating businesses that have growing international influence and impact.

Martha Sessums is the France Today Ambassador for San Francisco.

Previous Article The Paris of Famed Photographer Robert Doisneau
Next Article Cannes Film Festival 2015: The Year of Females in Film