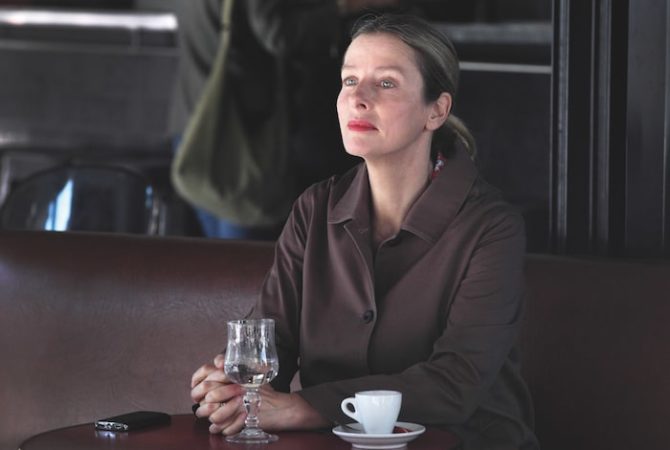 Multi-award-winning actress Karin Viard is responsible for some of the most heart-stopping moments in French cinema, but her latest role as a nanny in Chanson Douce is likely to be the most shocking and powerful one yet. Lanie Goodman finds out about the movie – and the woman…

Be forewarned: danger sometimes lurks in the most unexpected of places – even an ordinary child’s toy-strewn bedroom. When this innocent haven is transformed one afternoon into a horrific, blood-soaked crime scene, myriads of questions are raised, chief among them: What was the murderer’s motive for this inexplicably violent act of infanticide?

Adapted from the 2016 Goncourt prize-winning novel by Leïla Slimani (hailed as one of the best novels of 2018 by The New York Times) and directed by Lucie Borleteau, Chanson Douce (The Perfect Nanny) charts the increasingly fraught relationship between young and affluent Parisian couple, Myriam and Paul (played by Leïla Bekhti and Antoine Reinartz) – parents to a wilful little girl, Mila, and adorable baby, Adam – and their nanny, Louise (Karin Viard). 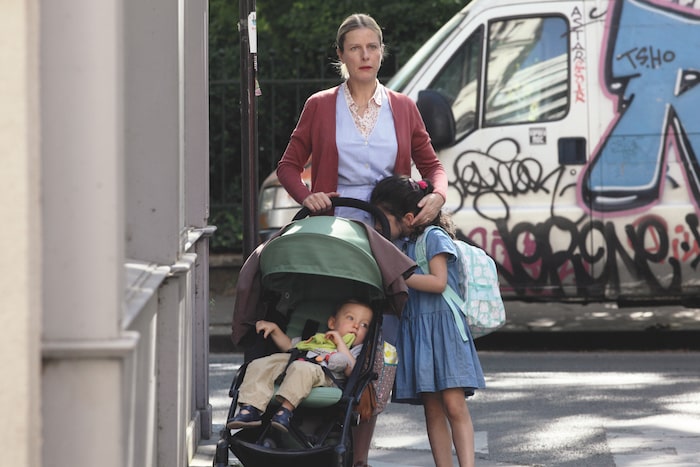 When Moroccan-born Myriam, who is verging on depression due to her new status as a stay-at-home mum, decides to return to work, Paul reluctantly agrees to hire a child minder. Discouraged by a series of interviews with hapless immigrant women, they are ready to throw in the towel until Louise – impeccably dressed, confident and (crucially) French – waltzes into their apartment armed with glowing references. They hire her on the spot.

Unnervingly gleeful, she not only bonds with the children and adores inventing extravagant games and organising birthday parties, but also turns out to be a domestic goddess – fastidiously cleaning and reorganising the household, cooking meals, arriving earlier and earlier each morning and leaving late at night. As she quickly becomes indispensable to their lives, Louise is welcomed as part of the family. Unsurprisingly, when Myriam and Paul take a family holiday to Spain, they have become so dependent on Louise that they impulsively invite her along. But their relationship with their model nanny starts to sour as Louise becomes increasingly volatile and aggressive. As the drama builds, her extreme loneliness gradually pushes her into the darkest realms of madness.

Little do the couple imagine that Louise, who lives in near-poverty in a minuscule unkempt apartment on the outskirts of Paris, has developed a strong co-dependent fantasy of her own that will ultimately lead to (seemingly) cold-blooded murder. 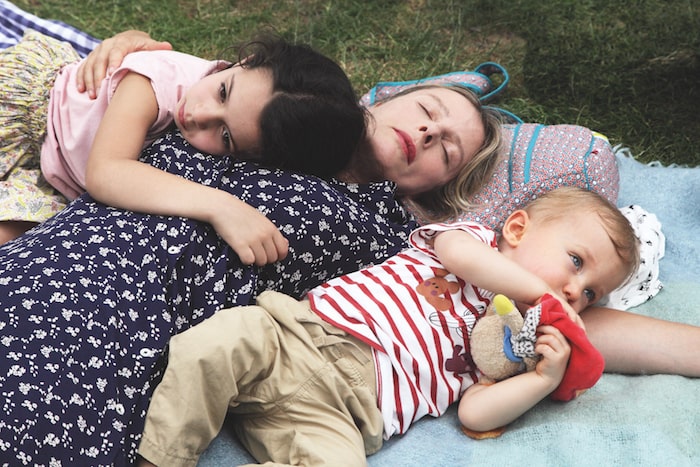 She appears to be the perfect nanny but Louise, played by Karin Viard in Chanson Douce, is a woman gradually descending into madness, with tragic consequences. IMAGES © STUDIO CANAL

“When I read the novel – even though she commits the ultimate, indefensible and largely inexplicable act – I fell in love with the character for reasons I can’t really explain,” says Viard, who magnificently portrays the increasingly rudderless child minder, veering seamlessly from Mary Poppins-like benevolence to frenzied desperation. “I immediately called a producer friend and asked him to buy me the rights – I think partly because the story recounts social humiliation, a subject that fascinates me. Plus, I’ve never played what you might call a kind of ordinary madness that comes from indescribable solitude.

“The film is not necessarily pleasant,” adds the multi-award-winning actress, best known for her acclaimed turns in Haut les Coeurs! (Battle Cries, 2000) and Les Chatouilles (Little Tickles, 2019), with a laugh. “I found my way by focusing on the first sensations I felt when I read the novel – a feeling of dizziness when you’re standing in front of an abyss. It’s a film that relies a lot on sensations.

“Louise can seem mysterious to the audience, but not to me. I need to know what brought her to do what she did, since she loved those children so much. I decided that she couldn’t bear the thought of being without them and wanted to take them with her, so to speak.” 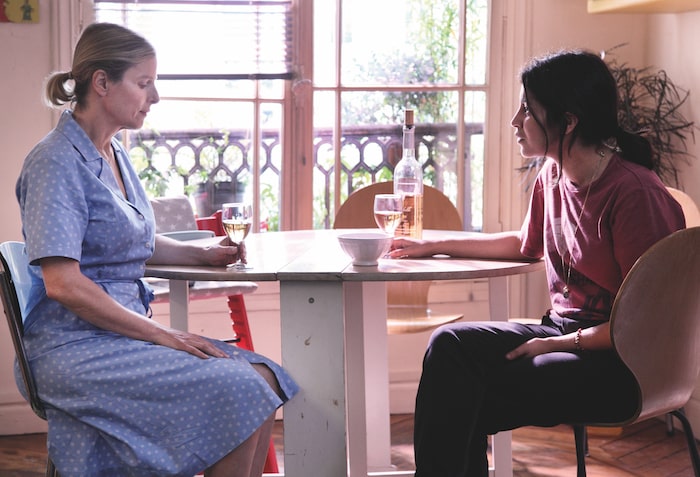 Surprisingly, the mood on the set was quite joyful, she says. “Leïla Behkti is charming and easy to work with. We laughed a lot.” Another theme explored in the film is ambiguity: from Myriam’s own mixed feelings about motherhood to the seeming friendliness extended to Louise by this hipster couple, who give the impression of welcoming the nanny into their family. “They’re young, inexperienced parents; they don’t have the user’s manual,” 53-year-old Viard points out. “Still, Louise endures a kind of social humiliation. I was also guided by my own invented back story, based on the novel, but barely mentioned in the film. Louise is a widow, once protected by her husband and now abandoned by her in-laws. She is deprived of the custody of her own daughter.”

Some viewers may see a Hitchcockian heroine in Viard’s blonde beauty and sangfroid. In one chilling scene, Louise (who deplores waste) fishes out the discarded carcass of a roast chicken from the kitchen bin, rinses it clean and leaves it on the table as a kind of sneering reminder to the couple to be more frugal.

A Brush with Madness

Equally reminiscent of films noir, Chanson Douce steers clear of graphic bloodshed, hinting at the atrocity of Louise’s act in a slow, panoramic shot of the children’s bedroom. “I told myself it wasn’t necessary the audience liked Louise,” says the actress. “For me, what was important was that she fascinates us, draws us in, intrigues us.”

When I suggest that this brush with madness strays from the ‘good-natured woman’ she tends to portray on-screen, she bridles. “I’m always surprised by the image of ‘the nice woman’ that people project on me,” she shakes her head. “I don’t care what people think of me and I feel relatively free about choosing my roles.

“Louise is definitely different from anyone I have ever played,” she concedes. “She’s bitter, dark, crazy and violent.” She pauses, leaning back in her chair. “Still, I wanted to give the character the right to be different from the image you might form of her. Something is boiling inside, and it isn’t about vengeance. She just doesn’t fit the mould.” And in another sense, neither does the versatile Viard, who refuses to be pegged, as her subtle and breathtaking performance in Chanson Douce unquestionably demonstrates. 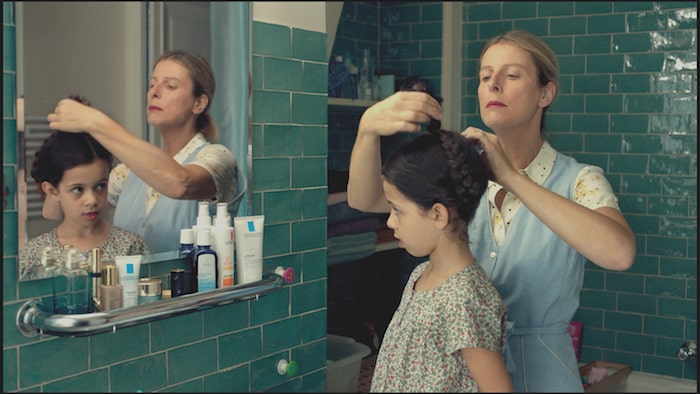