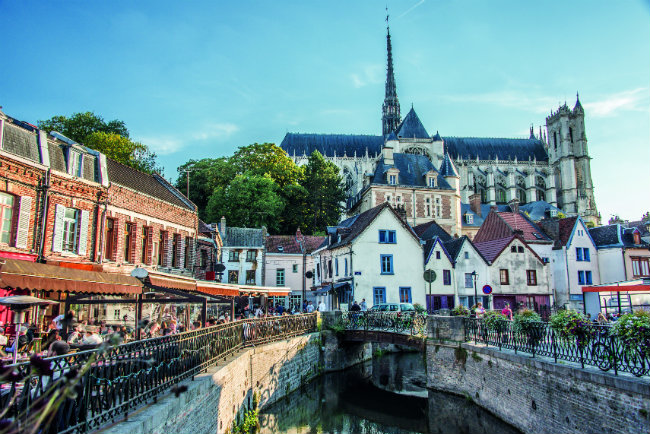 Early morning in the historic heart of Amiens and from my hotel room at Le Prieuré, all I can hear is birdsong. No sounds of traffic permeate the pedestrian streets around the town’s magnificent cathedral and no human voices break the tranquility. 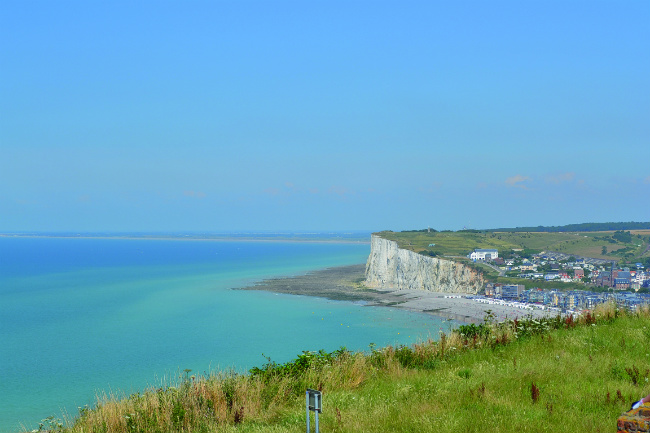 It’s a rare urban experience in the 21st century, but one that seems the perfect start to a stay in Picardy. Now joined with Nord-Pas de Calais to make up the new region of Hauts-de-France, Picardy is made up of three departments: Somme to the west, Aisne to the east and, to the south, Oise bordering Île-de-France.

Picardy has been hotly contested down through the centuries. The English and French kicked off The Hundred Years War here in 1346 with the Battle of Crecy. At Guise, near Saint Quentin, a formidable medieval fortress was substantially enlarged during the 16th century, while at Laon, the towering ramparts were strengthened again in the 19th century. 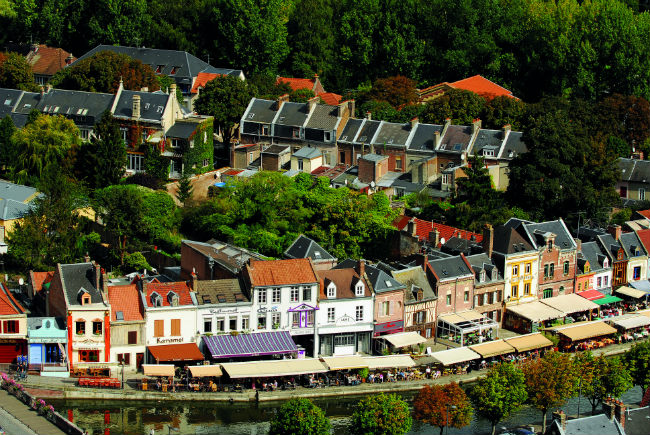 But it was the 20th century that changed Picardy the most. From 1914, Allied troops from Britain, Australia, New Zealand and Canada fought for freedom on the Great War battlefields of the Somme and the Chemin des Dames, joined by American forces at Cantigny in May 1918. Barely 20 years later, the Second World War must have brought a crushing sense of déjà vu.

Today, however, there’s an overwhelming feeling of tranquillity, not just at the many Remembrance sites, but also in the region’s historic towns and rolling countryside. Try hiking or biking along marked trails, or maybe seal spotting and birdwatching around the Baie de Somme. 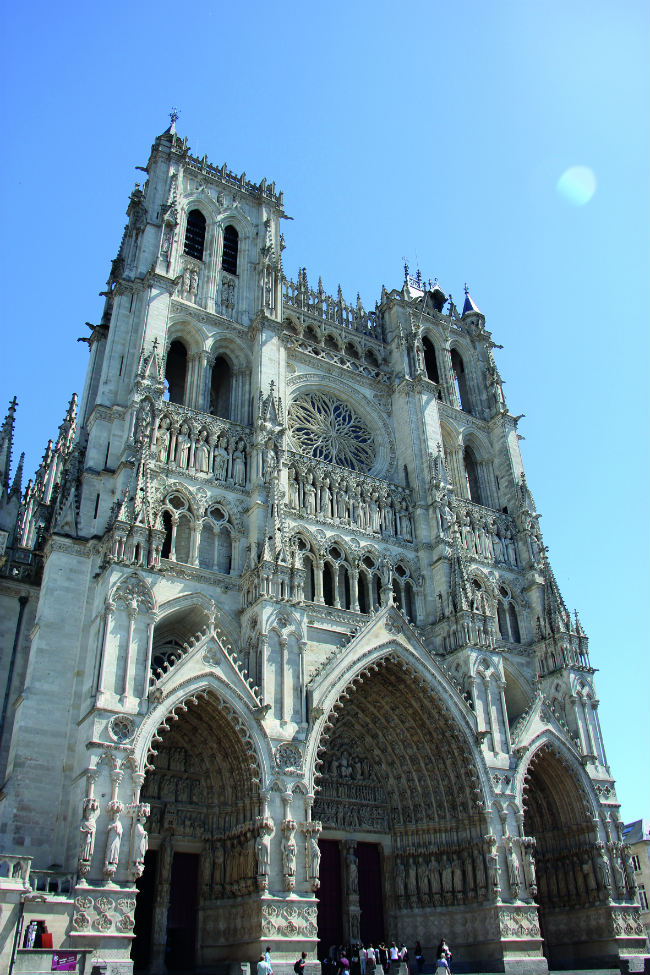 No visit to Picardy would be complete without a trip to Amiens Cathedral. Begun in 1220, this architectural marvel took just 70 years to build, despite being France’s largest Gothic building with the highest nave. Its fabulous west façade miraculously escaped the ravages of religious and international wars to leave modern visitors with a magnificent collection of carved – and sometimes amusing – figures. 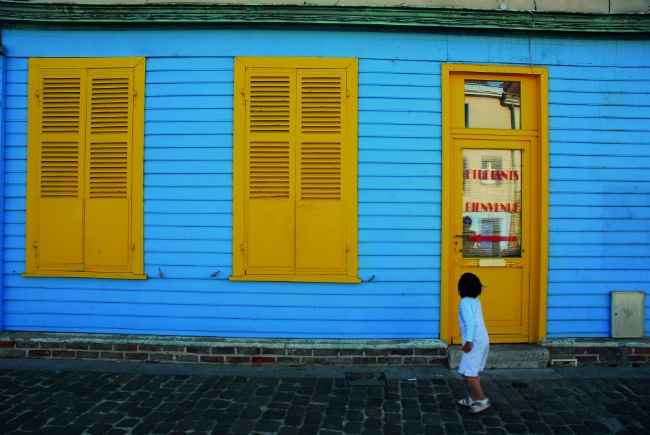 All medieval life is pictured here in stone. Look out for Adam scratching his chin at the offer of Eve’s apple and for the cooking pot brimming over with lost souls. Traces of colour are still faintly visible in places – the blue dress of the Virgin Mary and the azure eyes of the Angel Gabriel. Visit between mid-June and the end of September or over the Christmas period to see the West Front illuminated in its original polychromatic colours. 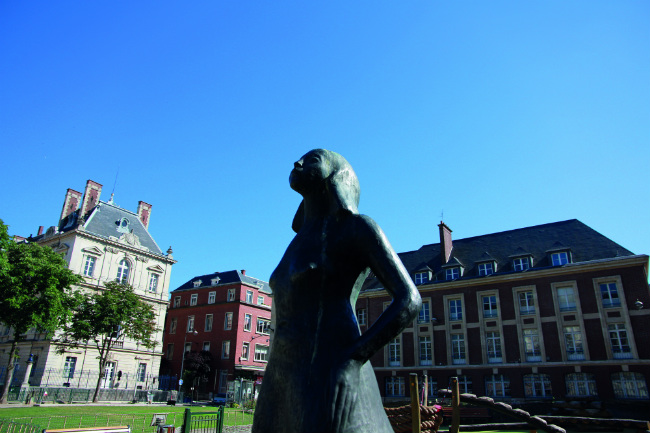 Author Jules Verne spent several years in Amiens and a visit to his 19th-century property, Maison à la Tour, brings his books vividly to life. Fast forward to the 20th century and award-winning author Sebastian Faulks set the opening chapters of his bestselling novel Birdsong in Amiens, painting an evocative picture in words of a trip around Les Hortillonnages. The Romans began draining this tranquil marshland to grow food and today 300 hectares of private gardens are dissected by 55km of small canals in the heart of the city. A guided trip by at-bottomed boat is a must.

East of Amiens, the small town of Albert is the gateway to the battlefield sites of the Somme. But stop first to walk through the pretty floral square with fountains and bronze statues of soldiers from different nations; visit the eye-catching Neo-Byzantine basilica of white stone and brick; and tour the tunnels of the Musée Somme 1916. 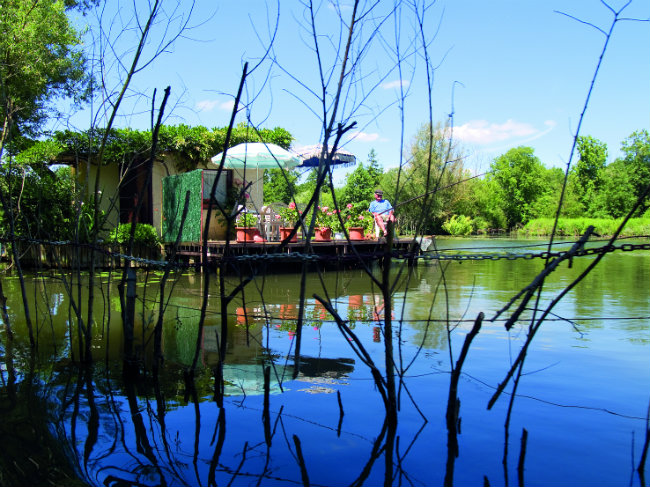 The density of First World War remembrance sites in Picardy can be overwhelming. The names alone – Delville Wood, Villers-Bretonneux, Mametz – can be enough to chill the soul. Today it’s hard to reconcile the lush, farming landscape with the devastation of a century ago. You see quiet villages, stoically rebuilt after the conflict, but what you don’t see are the scores that vanished forever. And everywhere there are cemeteries. Large national plots to French and German soldiers, and dozens of Commonwealth graveyards located at the spot where men fell during the summer of 1916; each one containing anything from a few gleaming white marble headstones to row upon row of final resting places. If you aren’t searching for a friend or family member and have no particular affiliation to a regiment or nation, I’d recommend getting an overview of the conflict first. Museums, such as the Historial at Péronne, the Musée Somme 1916 at Albert, and the new centre at Thiepval all provide a different perspective. Then it’s a case of picking your cemetery or memorial. All the sites are different and often frighteningly close together. 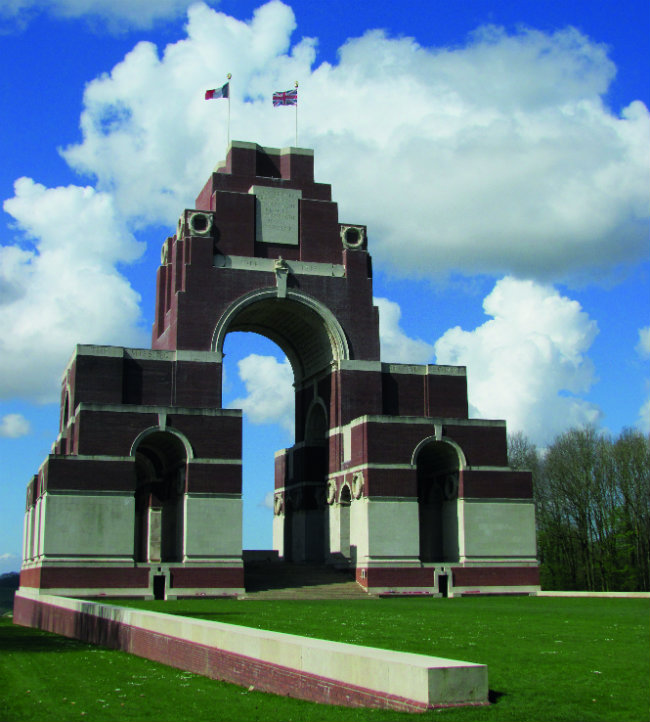 I easily combined visits to the towering Thiepval Memorial with the Ulster Tower, the Beaumont-Hamel Newfoundland memorial with Lochnagar Crater. Less obvious was the small hill at Frise, where I stood above the meanders of the Somme and read the information panels about the terrible battle that took place in this now-tranquil landscape. Pick up Somme 2017, the excellent free guide to the sites of the First World War, at any tourist office.

Further east in Aisne, the Chemin des Dames became equally notorious in 1917, as French and German troops fought over this strategic ridge, named after a road used by the daughters of Louis XV to visit a family friend. Today, a tour of the Caverne du Dragon tunnels and surrounding sites is a sobering, but essential, experience. 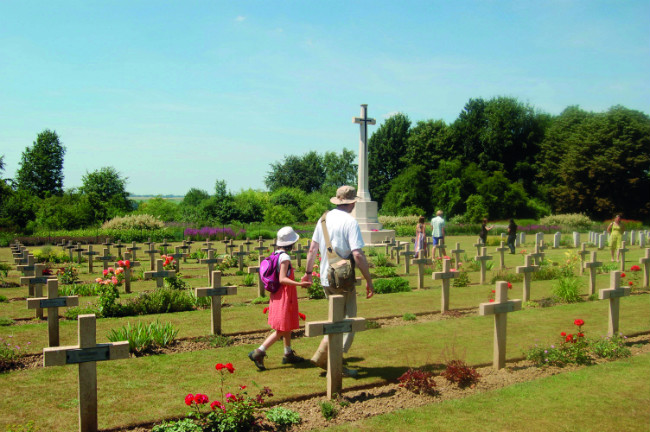 Picardy struggled stoically to its feet again after the Great War. Towns that had been virtually annihilated were rebuilt, often in fashionable Art Deco style. Jewel in the crown is Saint Quentin, where you can take your own architectural tour simply by wandering the streets and looking up at the wealth of period detail. Don’t miss the Lécuyer museum, with its rare collection of pastel portraits by local 18th-century artist Maurice Quentin de la Tour; the spectacular late Gothic Town Hall; nor the stylised roses and subtle colours of the Art Deco stained-glass windows created by Georges Bourgeot for the towering basilica. 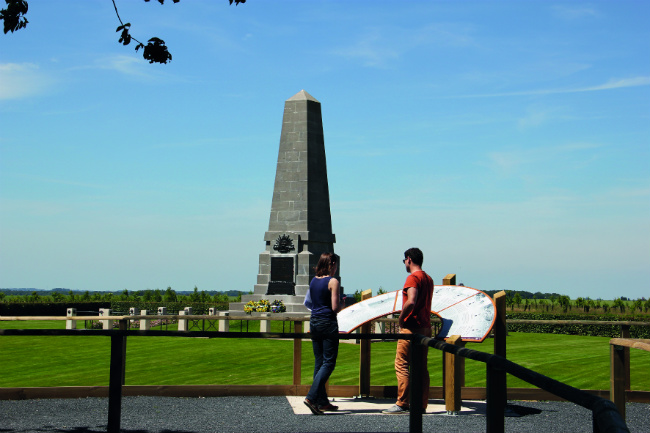 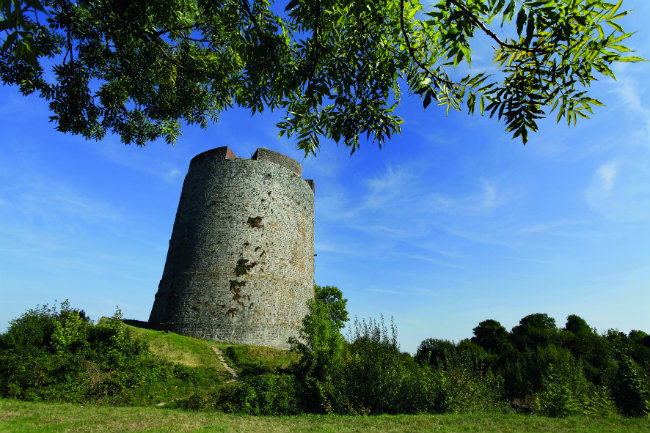 East of Saint Quentin, the small town of Guise has remarkable visitor sites that showcase two very different kinds of architecture. The medieval castle is a place to let imaginations young and old run riot with its towers, dungeons and underground storerooms. The Familistère, by contrast, was built as a 19th- century paradise for staff at the Godin stove factory and today makes a surprisingly engaging tourist attraction with access to the workers’ apartments, gardens and swimming pool. 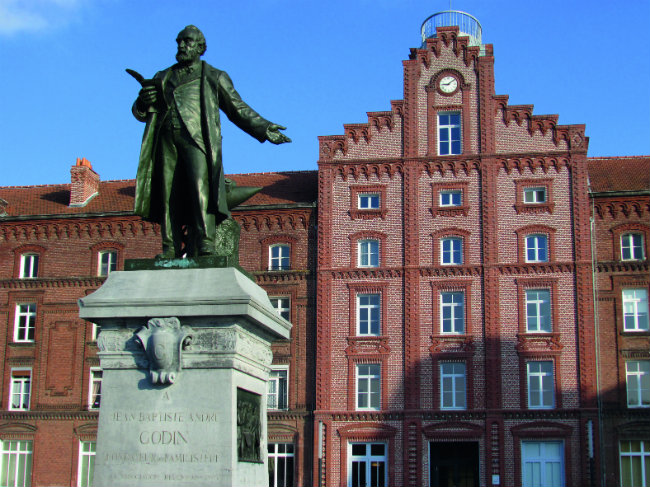 Further south, there are more Art Deco properties at Soissons including a former hotel designed in metal by a Russian architect, and the domed glass ceiling inside the former Palais du Vêtement, now the Eurodif store. The town’s spectacular cathedral is home to a large painting by Rubens; but my favourite religious building is the atmospheric ruined abbey of Saint-Jean-des-Vignes. Used by the military after the Revolution, it was dismantled in the 1820s and the stone used for cathedral repairs. Writer Victor Hugo was one of many who campaigned for the protection of the abbey’s façade. 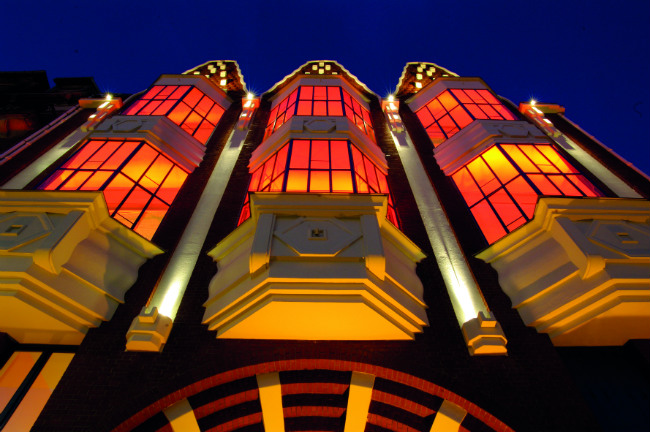 Laon boasts another spectacular cathedral, originally designed with seven towers but ending up with five when medieval money ran out. This gem of a town is perched on a promontory with strategic views of the plain, but the highlight for many is a tour of Les Souterrains – underground passages and bastions.

There are more tunnels to explore at Naours Underground City near Amiens, a network of chalk quarries used as a refuge across the centuries. And for those who prefer their homes to be picture-postcard pretty, Gerberoy and Parfondeval are classified among ‘les plus beaux villages de France’. 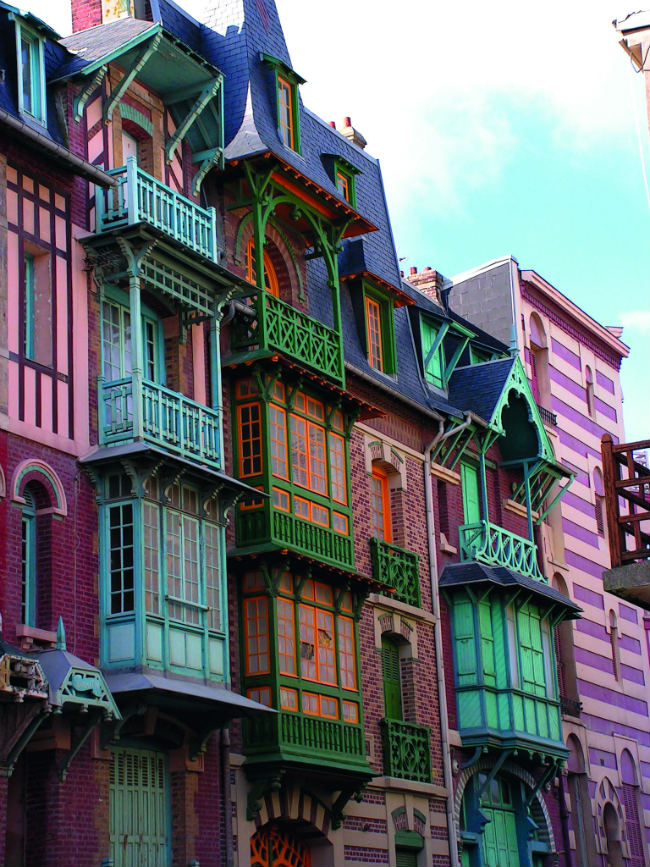 Beyond its historic towns, Picardy’s rolling countryside has much to offer the nature lover. In 2011, the Baie de Somme became only the 10th location to be awarded the prestigious ‘Grand Site de France’ label, as an unspoilt haven for migratory birds and seals. Find out about the flora, fauna and geology at the Maison de la Baie de Somme at Lanchères, then stop off at some of the small atmospheric towns around the shore such as Saint-Valery-sur-Somme with its high-level views and pretty marina. 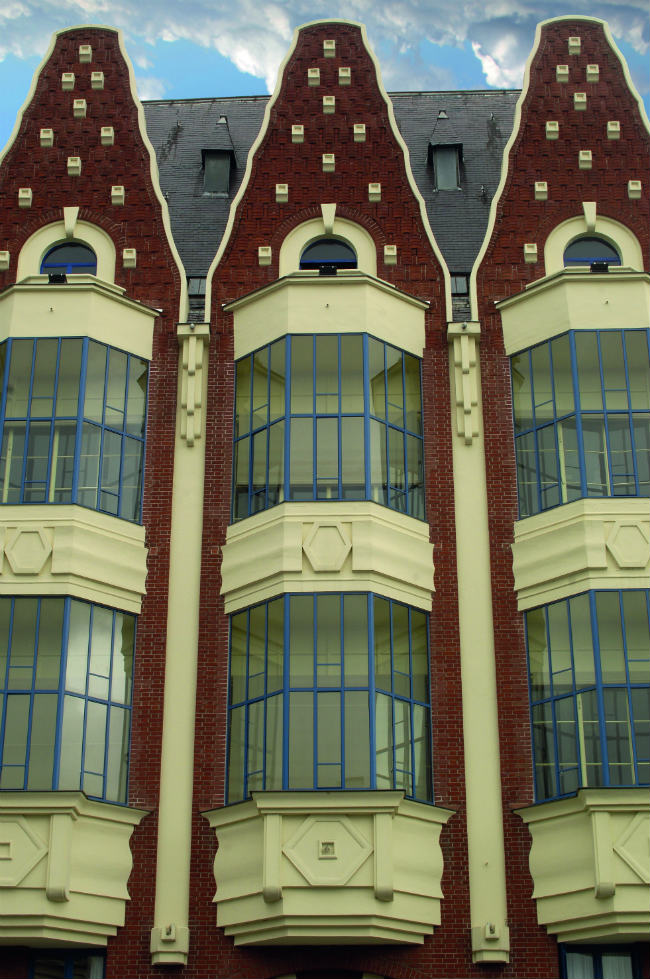 Further inland, drive the vineyards of the Champagne Tourist Route through southern Aisne. The cellars of Pannier Champagne are located deep inside stone quarries dating from the 12th century, and a carving of a tiny archer found by archaeologists on a gallery wall has been adopted as the brand’s symbol. 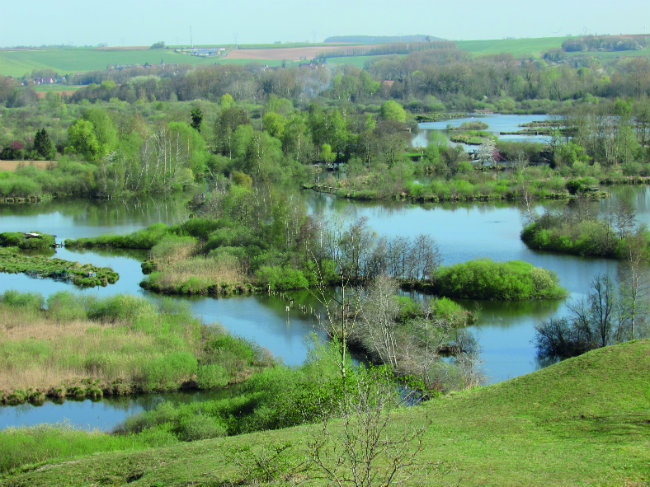 The quiet Picardy countryside also boasts a number of fine country houses and castles such as the family-owned Château de Condé, the Palace of Compiègne, and the turreted Château de Pierrefonds, restored from a ruin in the 19th century. But my all-time favourite is the Château de Chantilly, a vast estate
of 7,800 hectares at the heart of the great Chantilly Forest. A small fortress stood here on a rock in medieval times, but it was the Bourbon-Condé family who put the estate firmly on the society map in the 17th and 18th centuries. 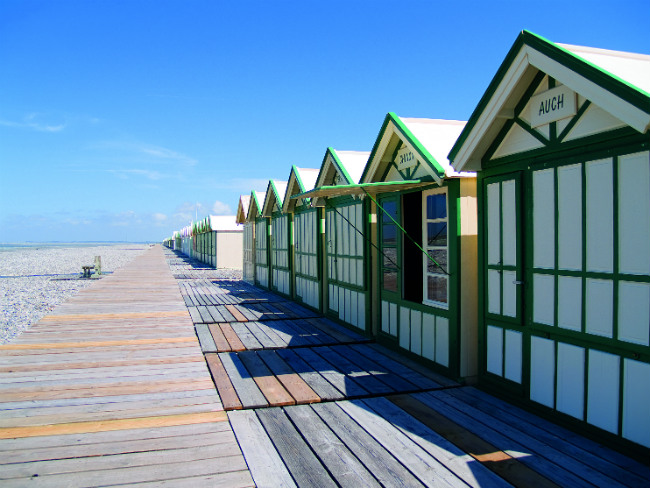 Beach huts on the front at Cayeux. Photo: Somme Tourisme

Today the Domaine de Chantilly is famed for its art treasures, its spectacular water gardens designed by Le Nôtre, and for the equestrian shows that take place in Europe’s largest and grandest stables. You can even spend a day at the races. It’s all just 25 minutes from Paris-Gare du Nord, but as I watch the thoroughbreds pound the gallops on morning exercise, stroll through the château’s formal gardens and follow tranquil forest trails, I could be miles from anywhere. And everywhere there is birdsong – it’s perhaps one of Picardy’s most underrated wellbeing attractions. 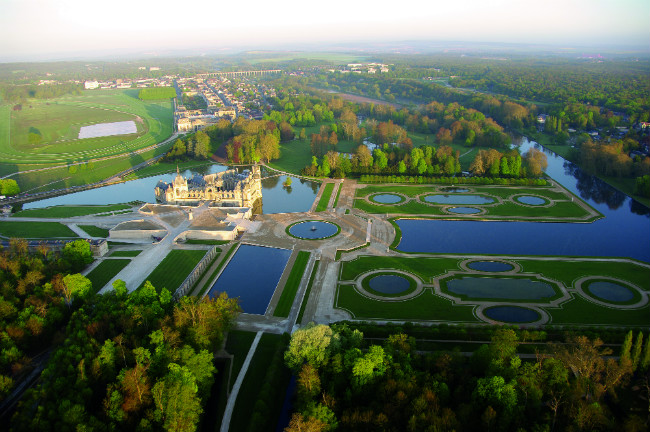 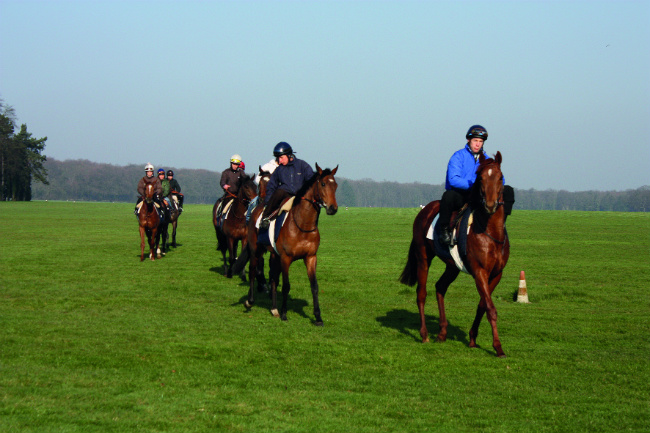 SIDEBAR: A TASTE OF PICARDY

There’s a long tradition of market gardening in Picardy. Eels are a traditional dish along the Somme and you’ll find many locally-brewed beers here. For an authentic flavour of Picardy on a plate – or in a glass – look out for these local specialities…

CRÈME CHANTILLY: Reputedly created at the Château de Chantilly, the authentic combination of chilled cream, icing sugar and vanilla sugar is whipped together in a cold metal bowl to create classic Crème Chantilly. 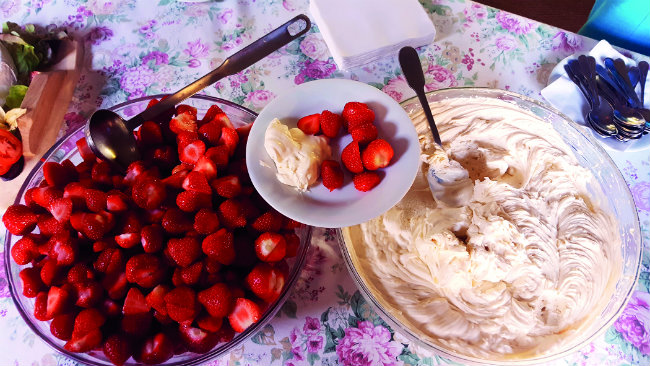 DUCK PÂTÉ: Invented in 1643 and praised by Madame de Sévigné, Pâté de Canard, Amiens’s signature dish, is enriched with pistachios and foie gras and can be served with a pastry crust.

CHAMPAGNE: In the south of Aisne, around Château-Thierry, the Marne Valley West trail is one of the self-drive Champagne Tourist Routes. The biggest regional player is Champagne Pannier, but local tourist offices can advise on visits to smaller producers. Website: www.lesportesdelachampagne.com. 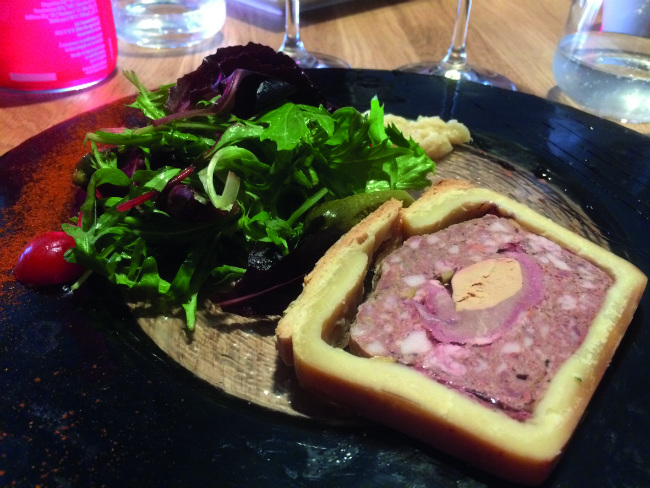 SALT-MEADOW LAMB: Sheep are reared on pastures surrounding the Baie de Somme that are covered by the sea at least six to eight times a year during spring tides. The vegetation gives the agneau de pré-salé meat a special colour and flavour that is much prized.

FICELLE: A savoury pancake, stuffed with mushrooms and ham, covered in crème fraîche and baked au gratin. Served as a starter, or a light lunch with a side salad. 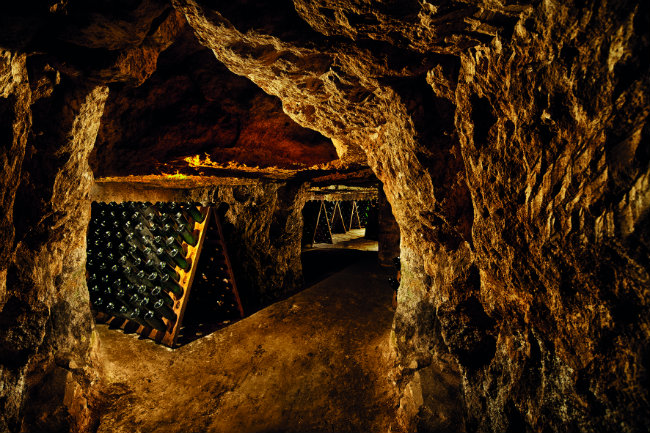 Previous Article Recipes by Best-Selling Food Author Trish Deseine
Next Article Art in Paris: The Alchemy of Gauguin at the Grand Palais