Cooking with Class in Uzès 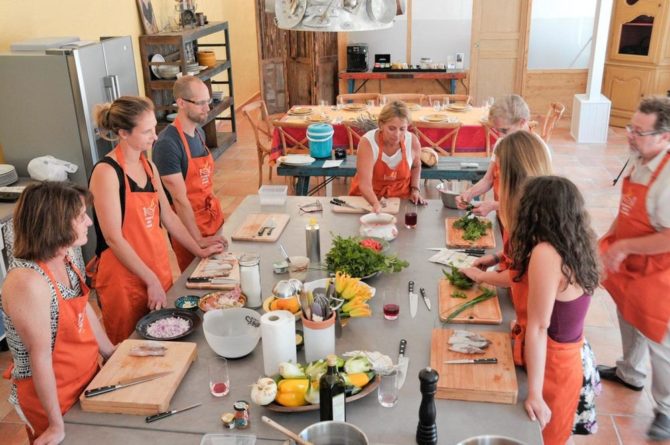 One thing I dreamed about before moving to France was to attend a cooking class in Paris. Little did I know that my wish would come true —  without leaving the little town of Uzès. Chef Eric Fraudeau of Cook’n with Class Paris opened a cooking school — right down the road.

With 20 years experience as chef in acclaimed hotels and restaurants such as the five-star Hotel de Paris in Monaco, Eric Fraudeau is among the best. His early career includes working in the kitchen with both Robuchon and Ducasse — an honor few chefs today can claim.

Chef Fraudeau’s new school, Cook’n with Class Uzès, specialises in Provençal & Mediterranean Cuisine — the foods people in the south of France love to eat and often serve in their homes. Classes offered include “French Market Class” and “Cook’n with Fish – Fish and Seafood class”. On market days the Chef and students go shopping together in either of two neighboring towns, Uzès (Wednesday) or San Quentin de la Poterie (Tuesday and Friday). They return to the class kitchen to create and enjoy a meal from the day’s best finds.

“Cook’n with Fish” sounded like the best choice for me, especially since fish is one of my favorite foods. What better way to learn how to prepare seafood Mediterranean-style than from an expert?

Pissaladière (a classic Niçoise specialty that’s like a pizza)

For our Provençal & Mediterranean dinner on “fish day,” some ingredients were more intimidating than others. Squid? Octopus? They’re great to eat, but how to cook them? I was in the right place.

Everything was laid out before us when we came into the chef’s kitchen. One by one the ingredients morphed into a pissaladière, a sauce, a salad, a lovely fish dish, a dessert. Chef Eric, along with his guest, Chef Patrick, from the Paris school, stood by to guide and instruct us.

Here are just a few of the tips from the day’s lesson:

Tip #1: Anchovies melt! Who knew? The steps for the pissaladière called for us to slice and brown onions, then add anchovies. Did you know that anchovies melt? They actually disappear when they are heated and stirred into a recipe.

Tip #2: Boil oranges? Chef Eric surprised us all when he popped two oranges from off the counter into a saucepan of water … to boil. “Organic oranges only,” he said. “We’re going to use the rind and all,” he added. The oranges, after they were soft enough from boiling, were going into a blender, then into the batter for the cake we were preparing for dessert.

Tip #3:  How to clean mushrooms. Chanterelles, which are known as “girolles” in France, were spread out on the kitchen counter in all their yellow splendour. Never having “properly” cleaned a mushroom, I was anxious to hear what the Chef would suggest. He recommended that we use our fingers to brush off the dirt, followed by a quick swipe with a paper towel. He said he finds this way of cleaning mushrooms easier than using a brush. It means one less utensil in the kitchen drawer, too.

During a gourmet tour of Sète, Nancy McGee from “Absolutely Southern French” taught me how to filet a cooked whole fish, served at the table. When you filet a fish to cook,  it’s done much the same way.

Every chef has his secrets and, for this cooking class, Chef Eric and Chef Patrick were willing to share everything, including how to recover from making a mistake. According to Chef Eric, almost every cooking error can be resolved.

We watched one “mistake” happen when the “mayonnaise” for the rouille separated.

“Rouille” is a creamy, garlicy sauce that’s commonly found in the south of France. It is prepared and served in a number of different ways, including as a main course. For our meal, rouille was a side dish.

While preparing the rouille, someone (not me, thank goodness) combined the ingredients too quickly. The sauce curdled. Chef Patrick “fixed it” by working with small bits of the mixture at a time. He pushed a little of the rouille to one side of the bowl, then dropped in an egg — yoke and all. He whipped the egg and rouille by hand. Little by little he incorporated the “bad” mix into the “good,” until it all was a perfect consistency.

Chef Patrick says you can do the same with chocolate if it “goes to seed.”

To cook with “class” in France you should know about French etiquette. There are “rules” on how to serve, eat, toast and drink. For example, before a toast, with drinks in hand, you must look each person straight in the eyes. It may take a little longer to take that first sip, but taking the time to do it right will make a lasting impression.

Déjeuner, or “lunch” is served mid-day in France. Until the 1960s, déjeuner was the big meal of the day. Families would gather at home for a two-hour break from work or school and sit down for a multi-course meal prepared by the mother. With changing times, many mothers work today. Everyone still takes a two hour break; but, the mid-day meal is abbreviated to something much lighter and not everyone comes home to eat.

“Dîner”, or dinner, is seldom served before 7:30pm. If it is the main meal, and especially on weekends and holidays, dîner can last three to four hours. Starting with the apéro, each course is served with complimentary wines, spirits, apéritifs and digestifs.

The Cook’n With Class menu was designed for a typical main meal. Call it “dejeuner” or “diner.”

When all the cooking and the lessons were done, Chef Eric invited us to gather around the side table for our apéro course. We toasted each other with tall flutes of champagne. Moving over to a large, beautifully appointed dining table where we sat, we were served the entrée course, or starter — the pissaladière.  The main course (“plat”) with “accompagnement” (side dishes) followed.

Just when we thought we had eaten enough to literally explode, a wooden platter with an assortment of soft and hard cheeses was passed around — a custom in French dining. Next, dessert — the heavenly “boiled orange” cake with chocolate ganache flowing on top.

Now that a bit of the mystery of Provençal & Mediterranean cooking has been revealed, I feel a little friendlier toward raw octopus and squid. Perhaps a visit to Cook’n with Class Paris will take the fear out of wine and cheese pairings … or unveil the magic of macarons. Today Uzès, next time Paris. Oh, be still my heart!

Deborah Bine, aka the Barefoot Blogger, loves to share tales of her solo life in France as an American expat who speaks no French. Retired from a career in advertising and marketing communications, and divorced after a 40-year marriage with children, Deborah left Beaufort, South Carolina and all of her belongings two years ago to move to the south of France. Now that she has found her “bliss,” her passion is to encourage others to break away from whatever is holding them back and to go after their dreams. “We’re on life’s journey alone. Be certain you love who you are and where you are.”