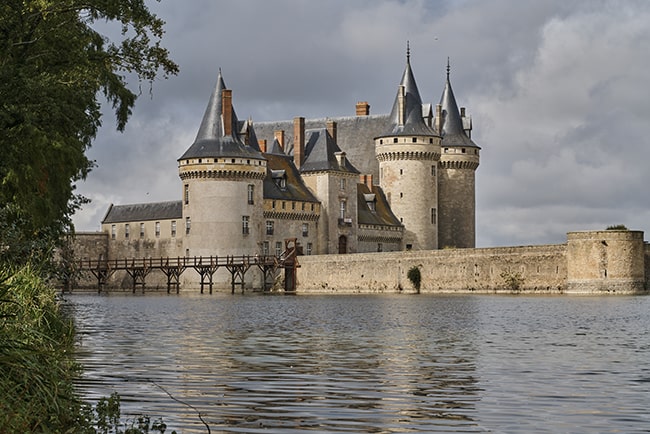 At the confluence of the rivers Loire and La Sange stands a commanding castle encircled by the reflective waters of a protective moat. Over the centuries, this château has welcomed a variety of illustrious guests; however, not all of them visited willingly. Is this castle in the heart of France a prison, a hideaway, or a refuge? History reveals it’s all three. 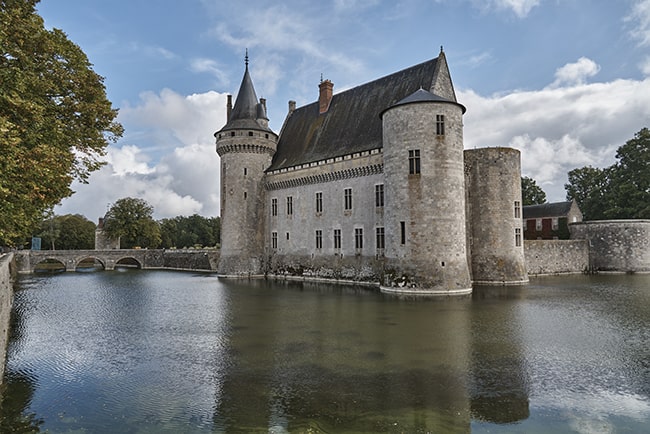 Château de Sully-sur-Loire and its reflection in the surrounding moat. Photo: Dawn Dailey

The construction of the original keep of the Château de Sully-sur-Loire began in 1395. Designed by Raymond du Temple, the king’s architect, for Guy de la Trémoïlle, the Lord of Sully, this fortified castle was built to keep enemies from invading at one of the few places in the Loire that was shallow enough to be forded. The residence was constructed several decades later. Over the next several centuries, Château de Sully-sur-Loire would undergo both destruction and reconstruction as it survived medieval attacks, various fires and floods, and damage during World War II.

Although its owners are notable, it’s the celebrity visitors who steal the show. In 1429, Georges de la Trémoïlle, the son of Guy de la Trémoïlle, hosted Charles VII and Jeanne d’Arc as they journeyed to the battles of Meung-sur-Loire and Beaugency, southwest of Orléans. The following year, Jeanne d’Arc returned to meet up with Charles VII again. However, Georges was concerned (or perhaps jealous?) about her influence over King Charles and she was detained unwillingly at Château de Sully-sur-Loire. Intent on continuing her fight for the liberation of France, she escaped her prison and was subsequently captured by Burgundian lords. If only Jeanne had enjoyed her castle-prison a bit longer, perhaps the Maid of Orléans would have met a less fiery fate. 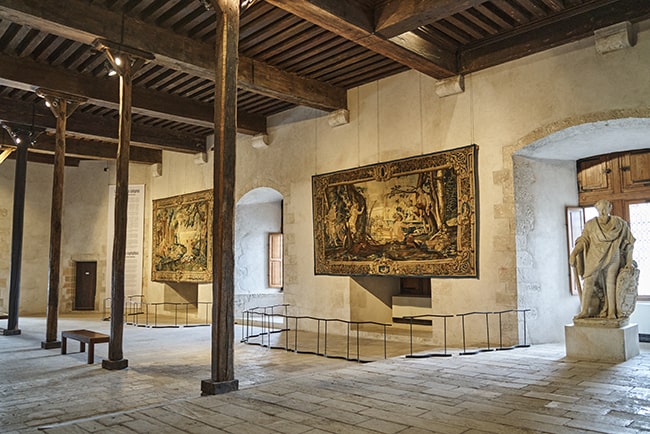 The lower great room showcases tapestries as well as a Carrara marble statue of the first Duc de Sully, commissioned in 1642, a year after his death. (C) Dawn Dailey 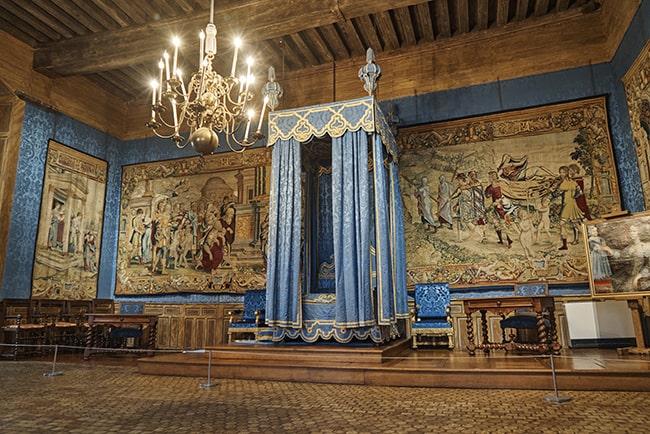 Fast-forward 200 years: Maximilien de Béthune became the first Duc de Sully in 1606. Among other titles, he was King Henri IV’s finance minister. While Maximilien continued the tradition of more home improvements to strengthen the château’s defense, he also hosted a trio of celebrities. In 1652, during the civil wars known as La Fronde, the queen regent, Anne of Austria, along with her young son Louis XIV and the Cardinal Mazarin, escaped to the Château de Sully-sur-Loire for protection. Rumoured to be the Queen’s lover, Mazarin perhaps sought more at the château than a hideaway for the young king. If only these tapestry-covered walls could talk! 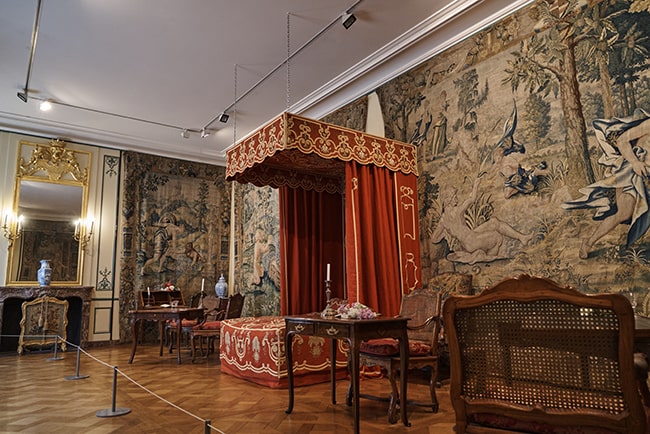 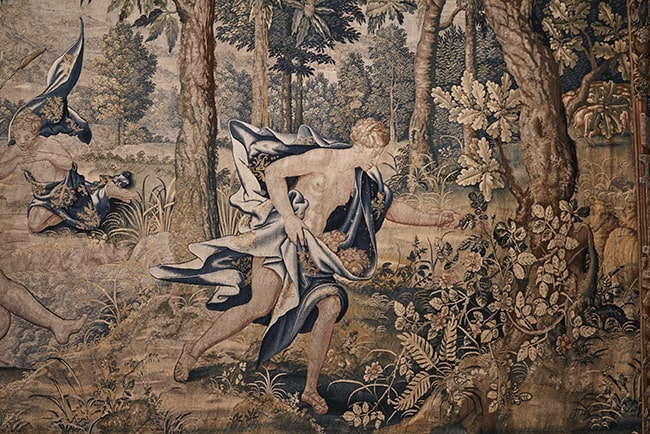 Towards the end of the 17th century, younger members of high society began to prefer the loosened etiquette of Paris over the formality of Versailles. It was in Paris, where the circle of free thinkers convened at the Palais du Temple, that the current owner of Château de Sully-sur-Loire and 5th Duc de Sully, Maximilien-Henri de Béthune, met the philosopher and writer François-Marie Arouet, known as Voltaire. In 1716, after he published a pamphlet insulting Philippe d’Orléans, the regent to the young future King Louis XV, Voltaire was banished from Paris; Maximilien-Henri invited him to wait out his exile at Château de Sully-sur-Loire. This country castle provided the perfect refuge for Voltaire, affording him space for his continued writing career as well as the diversion of having his plays performed here by other guests. Although Voltaire returned to Paris at the end of his exile, he visited the château again in 1719, this time of his own volition. Perhaps Sully-sur-Loire granted him the perfect respite from all the excitement in Paris. A few years later, upon being taunted by an aristocrat about his nom de plume, Voltaire retorted that while his name would be admired, his foe would “sully” his own name.

The Great Room with its ornate fireplace and painted ceiling. (C) Dawn Dailey 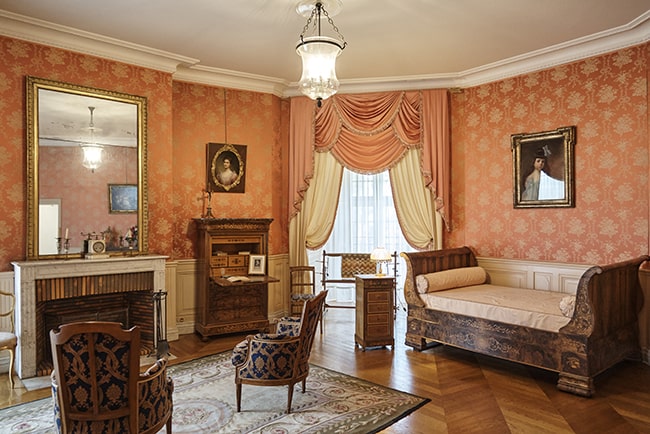 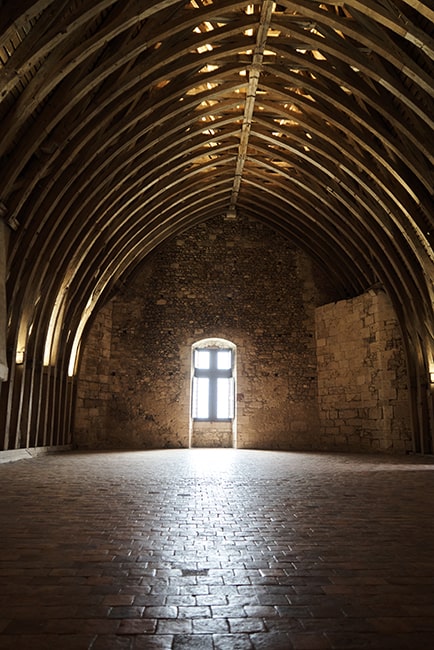 Intricate 15th century wooden buttressing inside the garrison is worth a look. (C) Dawn Dailey 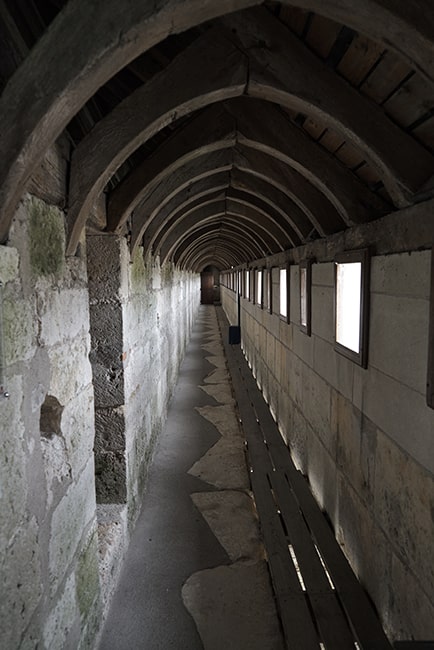 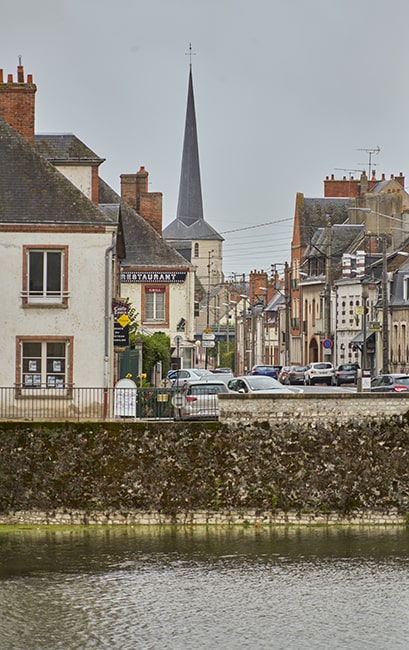 View of the quaint town of Sully-sur-Loire from the castle. (C) Dawn Dailey

Château de Sully-sur-Loire has survived despite wars, floods, and fires. It has been built and rebuilt, renovated, and refurnished. Still, it remains today, outliving its many illustrious inhabitants and famous visitors. Perhaps it is indeed a wonderful refuge and respite for all, in the heart of France, where “sully” is just another word to say we have indeed been spoiled by our visit. 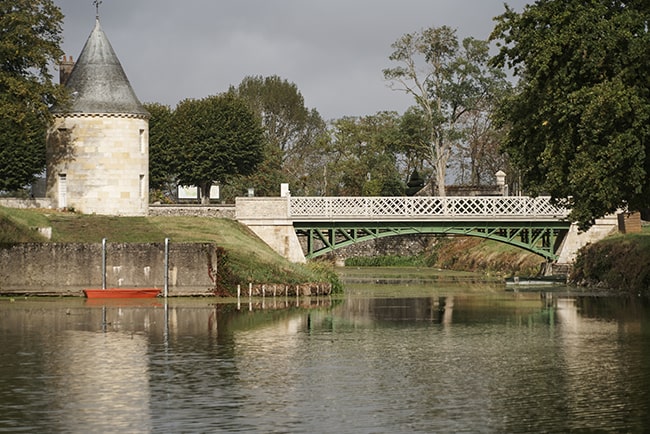 The bridge to bucolic grounds where weddings are often held. (C) Dawn Dailey 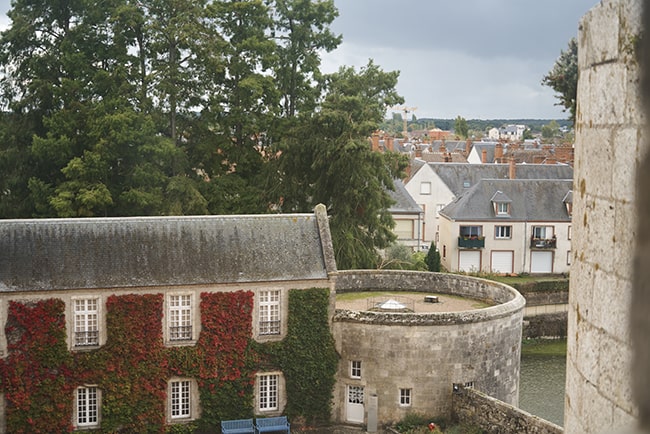 View of the Guardhouse and beyond. (C) Dawn Dailey 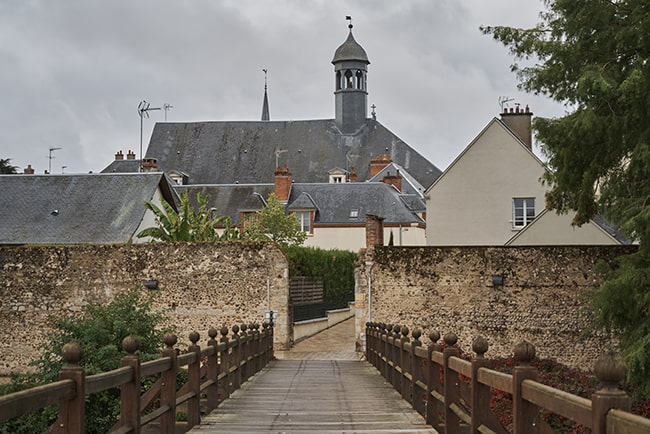 Explore the town of Sully-sur-Loire via this inviting bridge. (C) Dawn Dailey 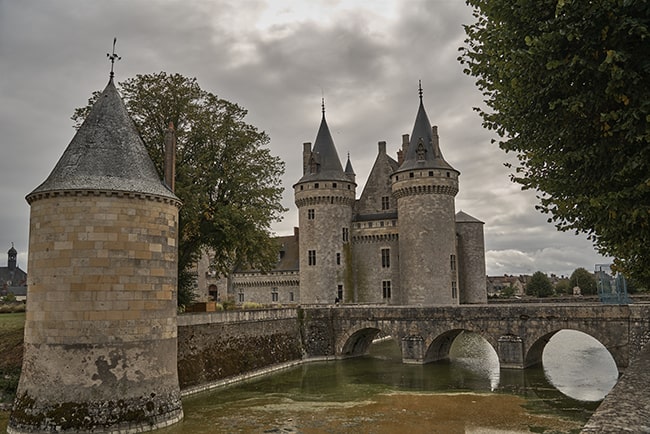 Interested in visiting Château de Sully-sur-Loire? This picturesque château with its fairy tale towers is located less than two hours south of Paris in the Loiret department of the Centre-Val del Loire region. Located right off of the D948 motorway, the château provides free parking and access to the town that bears its name. The intriguing history of notable owners and guests makes for an interesting tour of the place where some guests came unwillingly, while others were all too willing to stay. For me, it was definitely the latter!

Prefer to do some armchair travel? Check out the virtual tour at https://www.chateausully.fr/en/virtual.

For visitor information, go to https://www.chateausully.fr/

Previous Article Restaurant Review: Brigade du Tigre in Paris
Next Article What to See and Do in the Dordogne Valley