The Fire of Notre-Dame de Paris 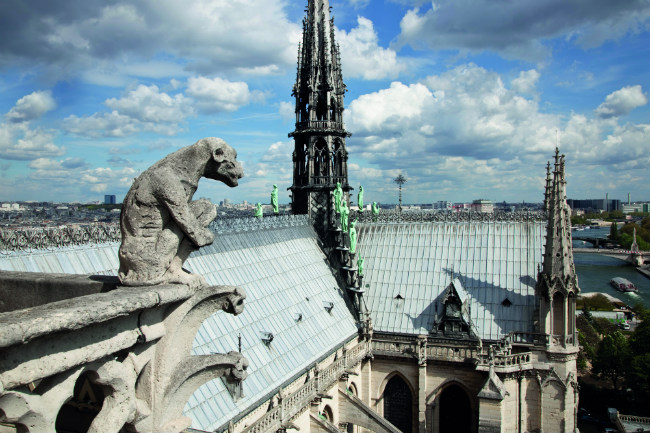 Images of Notre-Dame de Paris engulfed in flames caused shock and dismay the world over. A month on, however, we now know that this beloved landmark will be fully restored to its former glory – even if we don’t yet know what form the renovation will take. Caroline Harrap reports…

It was a moment that many will never forget – the sight of Notre-Dame’s iconic spire collapsing into the flames beneath. In Paris, where crowds had convened on the bridges and along the banks of the river, people looked on aghast. Across France, viewers stared at their television screens in disbelief. Around the world, others frantically followed the story online. 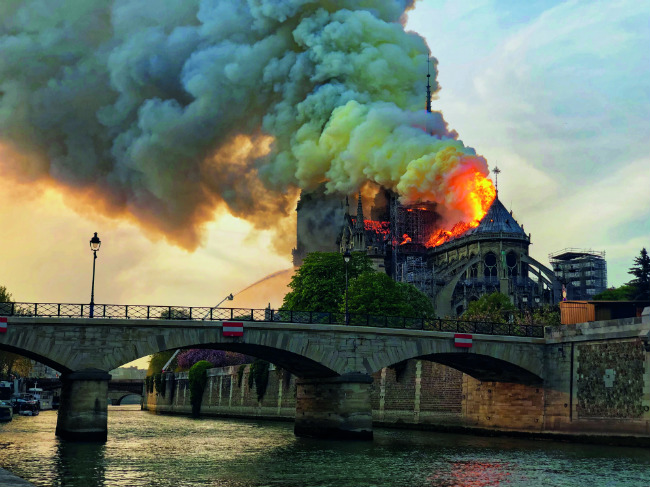 Notre-Dame’s roof and spire were engulfed in flames. Photo: Shutterstock

While the lead-covered spire was a more recent addition to the 12th-century cathedral, having been incorporated during the major restoration of the mid-1800s, its familiar silhouette was an integral part of the Paris skyline. And it was one of the most famous symbols of the French capital.

“I think everyone was just in shock really,” says long-time Left-Bank resident Denise Grassart, who witnessed the blaze firsthand. “For my part, I really had the impression I was living in a historical moment. It was almost surreal, in the truest sense of the word.

“We finally dragged ourselves away from the scene, while the fire was still raging, around midnight. I didn’t want to leave, for fear the whole structure would collapse. Miraculously, though, much of it has been saved, and we now know it will rise again.” 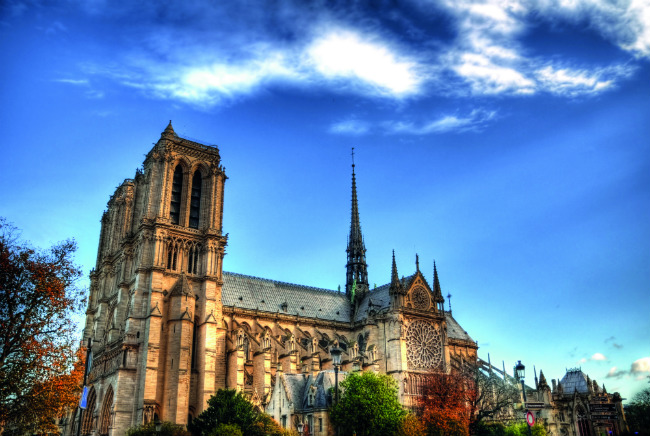 A view of the monument before the incident. Photo: Shutterstock

One of the nation’s most beloved landmarks, this masterpiece of medieval architecture dates back more than 850 years. Located right at the heart of Paris, on the small island called the Île de la Cité, construction began under the reign of Louis VII in 1163. However, it would be almost 200 years before the cathedral was fully completed.

Since that time, the building has been the scene of many major events in French history. As well as the crowning of King Henry VI of England in 1431, Napoleon’s coronation took place there in 1804. Later, it was immortalised in Victor Hugo’s 1831 novel, The Hunchback of Notre-Dame, which would eventually be turned into an award-winning animated Disney film. 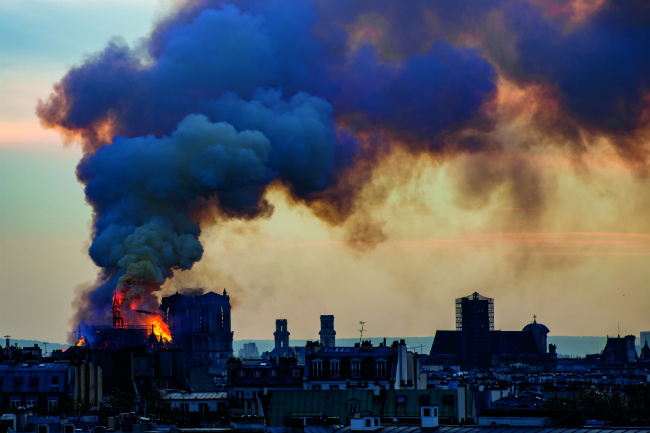 The cathedral’s iconic spire did not survive the fire. Photo: Shutterstock

Today, the cathedral is the most visited monument in France, even ahead of the Eiffel Tower, attracting some 12 million people a year. Perhaps it’s no surprise, then, that there was such a global outpouring of grief – with hundreds of millions of Euros pledged – and that, only days later, French President Emmanuel Macron had vowed to rebuild Notre-Dame within just five years.

“We now know that our wonderful cathedral, flagship of Christianity and part of the world’s cultural heritage, will be restored after the terrible blaze that destroyed its roof and spire but preserved the rest of its structure,” says Michel Picaud, president of the Friends of Notre-Dame de Paris, a charitable association devoted to raising funds for the cathedral.

“This dreadful event triggered a wave of sympathy and of generosity not only in France but all over the world. This gives the team in charge of the restoration a chance to do it in the limited period of five years, as targeted by President Macron. It will also be an opportunity for an extensive range of trades and craftspeople to bring back this iconic cathedral to its perennial glory.” 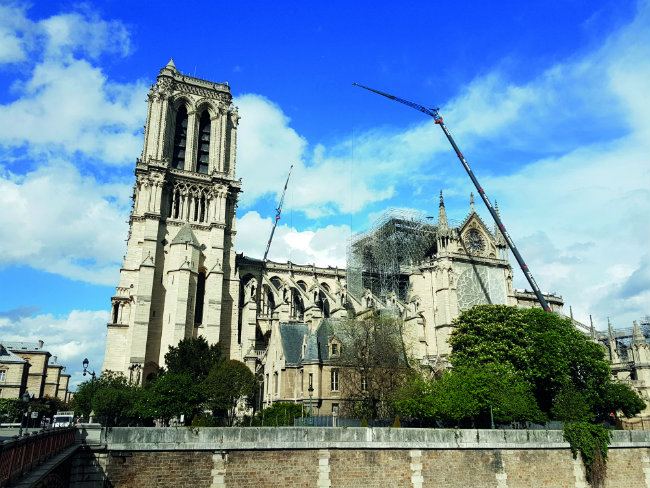 Thanks to the indefatigable efforts of firefighters the cathedral’s main structure, façade and two towers all survived. Photo: Caroline Harrap

Indeed, a month on from the event, reaction seems to have turned from one of global grief over the fire (the cause of which is still being investigated) to relief that it wasn’t as catastrophic as first feared. Not only did the cathedral’s main structure, façade and two towers all survive, the renowned rose windows appear to be intact too – as does the famous organ. Many of the priceless artefacts were also saved, including the Crown of Thorns purportedly worn by Jesus Christ during the crucifixion, as well as a large number of artworks.

However, there is no doubt that a gargantuan task lies ahead. Though the cathedral is still standing, the extent of the damage is not yet known, and it has been estimated that it will take at least four months to fully secure the site.

As well as creating a temporary roof, a huge wooden framework will be erected in order to support the main structure, while most of the stained-glass windows will need to be removed and put into storage. Then there is the clean-up operation. Many of the ancient oak beams in the vaulted roof – which was one of the oldest of its kind – crashed down in front of the altar, leaving a huge pile of charred debris among the rubble. In addition, the lead from the roof melted into the walls – and, of course, that’s not to mention the ensuing water damage. 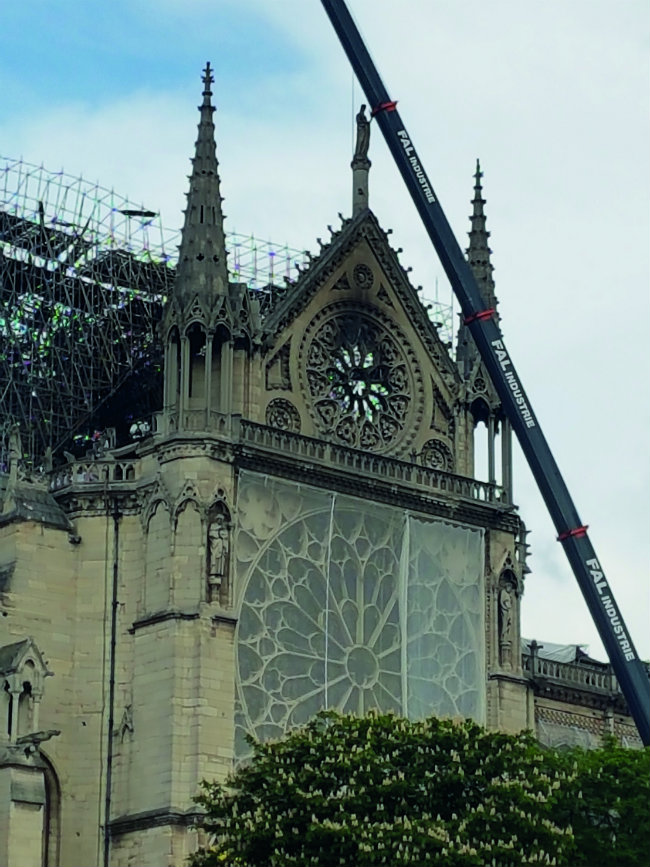 “For now, the priority will be to make the structure safe,” says Paris-based architect Michael Heurtevant, who has worked on the restoration of many historic buildings in the city.

“We then enter a process of consolidation and cleaning that will take several months. The urgency will be to structurally reinforce parts of the weakened cathedral as, until then, unsecured walls and vaults remain vulnerable to high winds. Also, assessing the damage, beyond the visually obvious, might take extra time. For instance, the mechanical resistance in parts of the limestone construction could have been weakened by exposure to extreme heat and then water.

“It is only after all of this that the diagnostic phase, led by architect Philippe Villeneuve, can begin – and we can start to know more about how the renovation itself could take shape.”

Certainly, though we can now rest safe in the knowledge that the cathedral will be rebuilt, the form of the restoration is still the subject of much conjecture.

While the purists wish to see it renovated exactly as it was before the fire, others feel it should be reimagined for a new chapter. This latter view gathered further credence when it was announced that an international competition would be held to design the new spire– leading to speculation that an entirely different design might be used. “The French do like to provoke culturally, as they did with the Pompidou Centre and the Louvre’s glass pyramid,” explains best-selling author Stephen Clarke, who has written extensively about the city. “So we can’t rule out a surprise.” 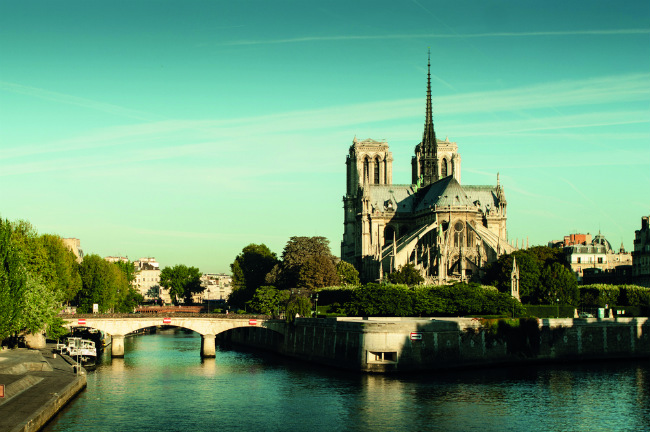 Notre-Dame (pictured before the fire) is France’s most visited monument. Photo: Shutterstock

On the other hand, several leading restoration experts have expressed their desire to see the cathedral recreated as it was previously and the integrity of the building preserved. They have also pointed out that this would be the quickest and easiest way to restore the cathedral – an important consideration if it is to be rebuilt in five years, as per Macron’s wishes, in time for the 2024 Olympics. “We have all the means necessary to restore exactly what was,” says Frédéric Létoffé, co-president of the Groupement des Entreprises de Restauration de Monuments Historiques, whose specialist artisans and craftspeople will be central to the renovation work. “We have the knowledge, the skills and the three main materials needed: the stone, the lead and the wood. So, the objective of five years can be reached, but it will require everyone working together to achieve this.”

Others have suggested that perhaps a compromise could be reached – where the integrity of the existing structure is respected but new materials are incorporated. For example, the roof could be constructed with steel, concrete or laminated beams – removing the difficulty and expense of finding enough large oak trees.

“If laminated wood was used, it could also have the added benefit of making the building more eco-friendly,” adds Michael Heurtevant.

Whatever the outcome, as well as reviving many ancient skills, the renovation will inevitably draw on the latest technologies too. For instance, the experts will be able to call on the extensive 3D mapping done by the late art historian, Andrew Tallon, which included more than 50 different viewpoints of the cathedral. The massive edifice was also chronicled in minute detail for the video game, Assassin’s Creed: Unity, even down to individual bricks.

“Notre-Dame is certainly well documented and could be rebuilt perfectly, stone by stone, but significant thought should be given to whether this is the right approach for the building,” concludes Vicky Saunders, managing director of BTP Architects near Manchester, England, which has worked on many prominent listed buildings and was a consultant on the popular BBC TV show, DIY SOS.

“Our view is that the external appearance should be faithfully restored with all the elegance and majesty of the original cathedral. However, the fire is now a layer of the building’s history and it would be appropriate for the restoration to reflect this in some way.”

In any event, back at the site of Notre-Dame, there’s a new sense of optimism that whatever form the renovation takes, France’s beloved cathedral will be back. There was perhaps no better symbol of this than the moment when the statue that once topped the fallen spire, a copper sculpture of a cockerel, was recovered from the rubble “battered but apparently restorable”. A phoenix from the ashes indeed.

For more information on how to donate to the appeal, go to www.gouvernement.fr/en/rebuildnotredame or www.notredamedeparis.fr/friends/donate

1163: Construction of the cathedral begins under the reign of Louis VII

1790s: Some statues suffer damage during the French Revolution

1831: Victor Hugo’s The Hunchback of Notre-Dame is published

1844-64: A major restoration project is led by architect Eugène Viollet-le-Duc

1909: Joan of Arc is beatified in the cathedral by Pope Pius X

1944: The Liberation of Paris is celebrated with a special Mass

1970: A memorial service is held for Charles de Gaulle

1996: The Disney film The Hunchback of Notre-Dame is released; A memorial service is held for François Mitterrand

2013: The cathedral celebrates its 850th anniversary

2019: A fire destroys the spire and much of the roof, but the main structure survives 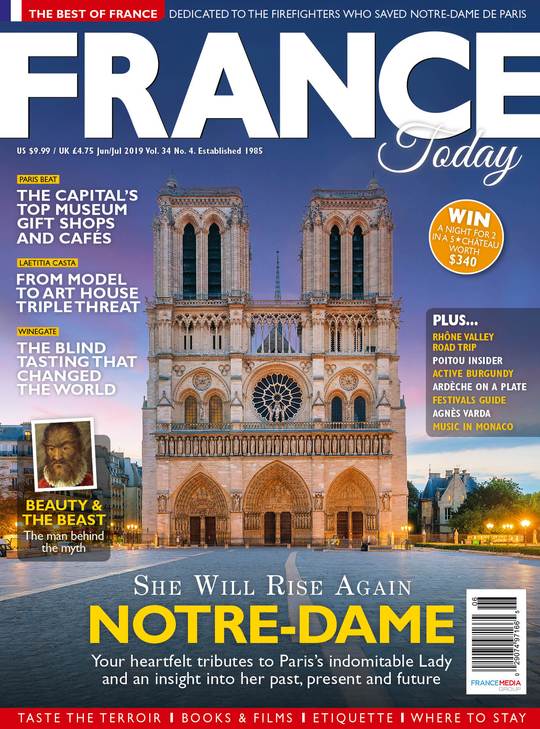 Every issue of France Today takes you on a journey through France within every one of its 164-pages. Discover more about life in Paris and in the cities and villages of the regions you love.

Previous Article Exclusive Recipes from Let’s Eat France! by François-Régis Gaudry and Friends
Next Article Win an Overnight Stay and 4-Course Meal for 2 in a 5 Star Château Worth $340