The Fruits of Paris: The Preservation and Rebirth of Montreuil’s Peach Orchards 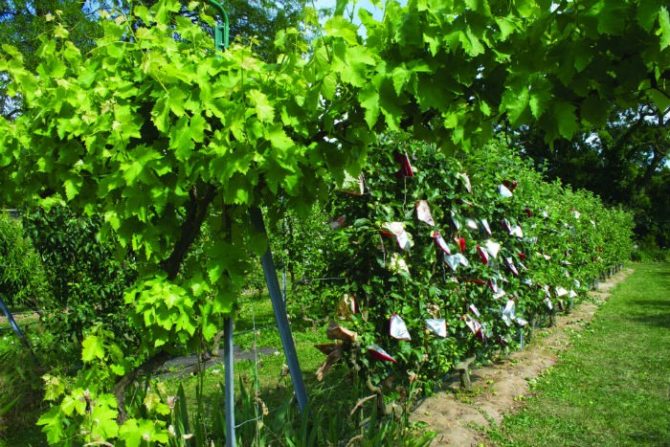 Montreuil’s oldest inhabitants remember when this suburb on the eastern edge of Paris was nothing but fields and orchards. Today, the Saint-Antoine quartier shelters the last murs à pêches (peach walls), which provide a glimpse into the region’s agricultural past. Aerial photographs taken at the turn of the 20th century show a labyrinth of squat peach walls covering some 90 percent of Montreuil’s surface area.

“It’s an ordinary landscape, it’s not the Mont Saint-Michel. But these walls create something very unique, in the heart of Paris,” says Pascal Mage, the president of Murs à Pêches (MAP), the non-profit organisation which has been tending this portion of Montreuil’s history since 1994.

Made of gypsum plaster and flint, which was naturally abundant in Montreuil, the murs à pêches were the foundation of the city’s fruit production. “They weren’t separating walls, but rather working walls,” explains Pascal. “The horticulturalists repaired them every year. Today, they crumble, one after another.”

Of Montreuil’s original 500 hectares of walls, perhaps a tenth remain. Out of those, only eight hectares have been officially classified as Paysages Pittoresques (Picturesque Landscapes), which protects them from losing ground to the ever-encroaching city. As for the fruit itself, it’s had a little more luck enduring the changes that have transformed Montreuil over the last four decades.

Aptly, on the Rue du Jardin-École, the Société Régionale d’Horticulture de Montreuil (SRHM) keeps up a working orchard and garden where both heritage and new varieties of peaches, pears and apples are looked after with the same attention that its founders paid to their own orchards.

“In 1878, the horticulturalists of Montreuil formed the Society to pass on their knowledge and increase the worldwide recognition of Montreuil’s fruit,” explains Sylvie Chiquier, the SRHM’s secretary. The Society’s one-room museum provides a fascinating look into a lost world, one which revolved around the orchards until the mid-20th century: basketmakers supplied the paniers in which the fruit went to market, blacksmiths forged pruning tools, guards kept away thieves and masons maintained the walls.

“You don’t find this technique anywhere else,” says Chiquier. Not only did the walls give horticulturists more surface area on which to grow their prized fruit, but they captured and retained the sun’s heat, which allowed them to cultivate early and late fruit varieties. As Chiquier explains, “So the Tsar of Russia could have fruit with his seal on it before or after everyone else.”

The ‘seal’ wasn’t a hastily-applied sticker – le marquage (marking) was a process that began in June with l’ensachage (bagging) and finished in September or October when the fruit ripened. In June, a paper bag was placed over each fruit, preventing it from changing colour until September. A month before maturation, the bag was removed and a paper stencil applied with gelatine. The fruit then finished colouring, resulting in a natural ‘tattoo’. Beyond aesthetics, l’ensachage protected fruit from pests and bad weather.

“Fruit defends itself by developing a thick skin,” explains Chiquier, but shielded by the sacs used in l’ensachage, the skins of Montreuil’s crop remained delicate, which contributed to its renown. In 2000, the SRHM rediscovered the technique and began working with local horticulturalists to ‘tattoo’ a selection of apples each year, with the likes of Santa, ‘Eve’ and ‘bonne année’ replacing the royal seals of yore.

It’s unlikely but true that pruning became an extreme sport in the hands of a few inspired horticulturalists, such as Alexis Lepère (1799-1882). In one photo, Lepère stands beaming stands next to a single tree pruned to spell out ‘Napoléon’. Although this type of extravagance was exceptional, the work of a horticulturalist was meticulous in many ways.

“They pampered their fruits,” confirms Chiquier. Such full-bodied and delicate-skinned peach varieties as Grosse Mignonne and Têton de Venus were even hand brushed, to remove the tiny hairs which made ‘tattooing’ impossible. Tending the orchard was a family affair – men pruned, women undertook bagging and marking, and the children spent winters preparing sacs by the fire. As Chiquier recounts, “One woman remembers her mother popping paper bags on fruit so fast that you could barely see her hands.”

The steady decline of Montreuil’s fruit industry saw only a handful of families left by the 1980s. For local historian Jacques Brunet, the reason is obvious: “Les Halles [formerly Paris’s central market] relocated to Rungis.” For Montreuil’s fruit growers, who traditionally got up at four or five in the morning and walked five miles into Paris to sell their produce, the market’s move to Rungis, almost 10 miles away, caused a logistical impasse.

The market’s relocation reflected still greater changes. The care and skill invested in Montreuil’s succulent fruit also made it expensive. The arrival of the railway brought cheaper fruit to Paris from the south of France and, eventually, further afield in Europe and from North Africa.

“The adults had known since the 1950s that they would be the last,” says Brunet. “They told their children to find another profession because there was no future in this one.” Sadly, they were right. There’s no longer an orchard industry in Montreuil and the murs à pêches are slowly disintegrating. But if one thing has survived, it’s the region’s horticultural savoir-faire.

“The SHRM’s original members were very serious. They got together once a month and wrote everything down,” says Chiquier. The SRHM passes on this valuable knowledge during workshops featuring such horticulturalists as Bernard Guicheteau, one of the last French producers to use traditional pruning techniques and gentle pest control methods.

“If we want to preserve the murs à pêches, we have to cultivate them,” says Chiquier. “A wall without a fruit tree doesn’t make any sense.”

Today, the Saint-Antoine quartier’s original murs à pêches are part of a new landscape, one where community gardens, art installations and grassroots festivals have replaced production. During the quartier’s annual celebration, a few thousand people pass through the space over a weekend.

“The murs à pêches have become a space of freedom and surprise,” says Brunet. A cultivation of a different sort is taking root and everyone can take part, even if it’s just buying fresh Montreuil fruit en saison.

Kate Robinson is a Paris-based writer who’s worked on travel and food books for the publishers Flammarion and Hachette, and is a copy editor for the Louis Vuitton City Guides.