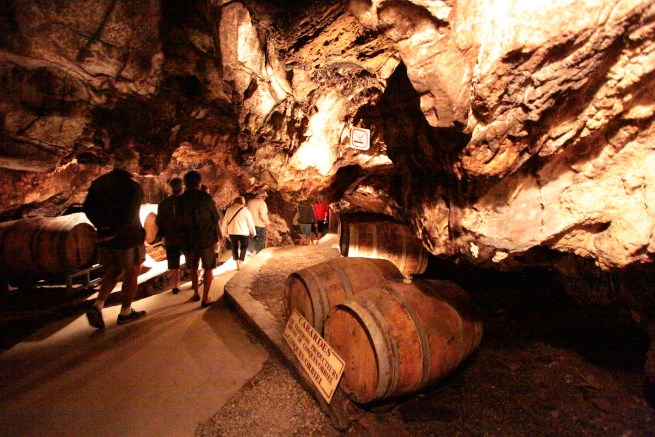 Exploring caves in the Languedoc-Roussillon

I’ve never been one for actively choosing to spend my holidays in the dark – give me a stretch of golden sand and blue sky any day – but ever since my first visit to a grotte (cave) a few years ago on a less sunny day, I cannot now go past one without venturing into the mystical gloom – they are simply magical!

There are hundreds of caves scattered all over the Languedoc Roussillon. Some of them are just simple shelters on the sides of mountain roads, but others are enormous warrens of indescribable beauty which have been opened up to public access. Here you will not find any gloom but carefully constructed walkways that take you through the incredible illuminated chambers filled with stalagmites and stalactites gleaming like petrified waterfalls, iridescent underground pools and rivers, brilliant colonies of crystalline formations like enormous snowflakes.

A visit to these marvellous natural wonders is a fantastic day out for children (the caves are well maintained, perfectly safe and all visits are guided by cave specialists) and adults alike, and provides an educational and memorable detour from the medieval châteaux and vineyards that the Languedoc-Roussillon is also famous for.

Each of them offers a rich diversity of rock formations, and the unique experience of journeying to the centre of the earth! A word of advice – the centre of the earth is not warm – temperatures in all the grottes range between 10° – 14° C year round and the atmosphere carries a lot of moisture, so bring a sweater and sensible shoes!

Grotte opening times and tours vary according to the time of year – please avoid disappointment by checking or calling in advance.

Gouffre Géant de Cabrespine – big enough to fit the Eiffel Tower – guided visits last 45 minutes – no stairs/ easily accessible – an extended 5 hour tour off the normal tourist section is also available by appointment throughout the year.
access: on the D112, north of Carcassonne

Grotte des Grandes Canalettes – part of a large underground river which has been explored for several kilometres – underground musical concerts in July and August!
Guided visits last 45 minutes
access: on the D116, west of Perpignan, near Villefranche-de-Conflent

Grotte de Clamouse – known for its abundance of aragonite and calcite concretions – guided visits last 1 hour
access: on the D27, north of Montpellier, near St-Guilhem-le-Desert

Grotte de la Deveze – series of six caves and home of the French Caving Museum
access: on the D908, west of St-Pons-de-Thomieres, near Courniou

Grotte de Labeil – smaller cave once used to make Rocheford cheese -part of the cave now used by a nearby winery to produce a cuvée spéciale.
access: on the D151, north of Lodeve

Grotte des Demoiselles – its name means Cave of the Fairies and it is often described as the true cathedral amongst caves, this is THE most celebrated cave in the region – vast and incomparably beautiful – open all year round – guided visits last 1 hour.
access: on the D108, south of Ganges, north of Montpellier

Aven Armand – one of the first caves opened to the public – funicular access to the cave – disabled visitors welcome.
access: on the D63, south of Mende

Grotte de Dargilan – known as the Rose Cave thanks to iron-oxide deposits which give varied sunset colours to the formations.
access: on the D99, south of Mende

Grotte de la Cocalière – said to be the longest cave in France with rare disc-like formation – guided visits last 1 hour.
access: on the D901, north of Ales, near St Ambroix

Aven d’Orgnac – proposed UNESCO World Heritage Centre, among the grandest caves of the world and home to Regional Museum of Prehistory – guided visits last 1 hour.
access: on the D176, north of Nimes, east of Barjac