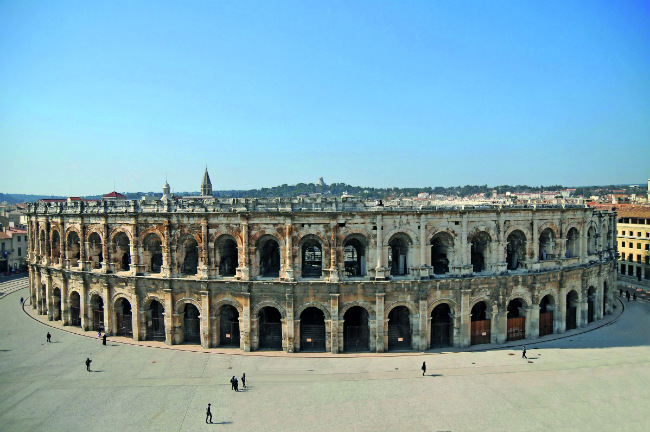 With the city on the brink of UNESCO World Heritage status, Guy Hibbert suggests you get there early to beat the crowds…

When the Romans conquered Gaul it was the well-known source of spring water that first drew them to Nîmes. In the city’s Jardins de la Fontaine two swans cruise serenely over the deep green pool where the ancient Nemausa spring still feeds the city’s water supply, some 2,500 years after it was first discovered. A deep sense of history shadows you around the city as you encounter the legacy of two millennia of human architectural achievement.

Against a backdrop of fabulous Roman temples, medieval houses, Renaissance mansions and 18th-century formal gardens, Nîmes is alive and buzzing with a contemporary Mediterranean vibe. Paved pedestrianised shopping streets with designer clothing boutiques are interlaced with quiet alleys offering Andalusian-style tapas bars, bodegas and trendy bistros with tables and chairs spilling onto the pavements. But still the memory of previous centuries is never far away. Mulberry trees, which adorn street corners and squares, remind us that the silk industry once lined the pockets of prosperous traders. A crocodile in the ubiquitous city’s coat of arms harks back to the Roman defeat of Antony and Cleopatra in 31BC. (There were plenty of crocs in Egypt but the only ones in Nîmes are four colossal stuffed specimens which hang outside the Mayor’s office, like something Damien Hirst might conjure up.)

In the Jardins de la Fontaine lie the Roman remains of the Temple of Diana, now understood to have been a library, and on the cypress- and pine-studded hillside above the Nemausa spring sit the remains of the Tour Magne, a former Roman tower guarding the city. The gardens themselves are the work of Jacques-Philippe Mareschal and Pierre Dardailhon in the 18th century. Classical statues, urns and balustrades are surrounded by moats and waterways. Under the towering plane trees on the Quai de la Fontaine a group of locals are playing pétanque on the dusty gravel.

Then, just as you get used to the quintessentially Mediterranean outdoor culture and lifestyle, something quite mind-blowing happens. You turn from a typical Provençal side street (although here we are in the Gard département, which is not technically in Provence) and come face to face with the astonishing Maison Carrée, a grand temple of the Roman Empire from the 1st century AD, in almost pristine condition. Its magnificent white stone columns, pediments and decorated friezes are a striking contrast against the cerulean blue sky. What could be a better visual metaphor for the city of Nîmes than to catch the dramatic reflections of the Roman temple in the sheer glass wall of Norman Foster’s Carré d’Art building? This is a museum of contemporary art which sits proudly opposite its 2,000-year-old neighbour. There are around 480 works of art housed in the museum, spanning contemporary art from the 1960s to the present day. 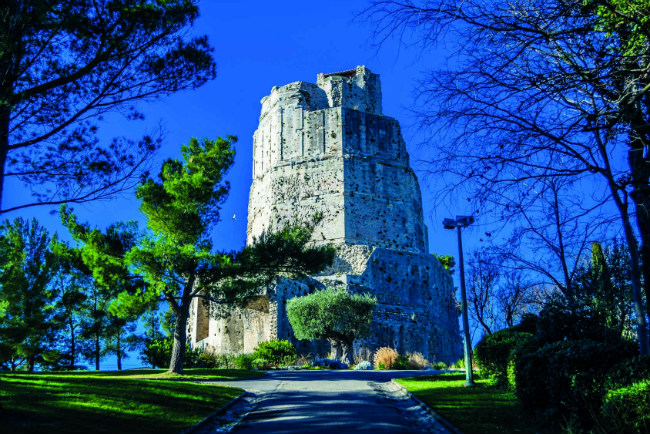 There is so much to explore in Nîmes. Photo: Fotolia

The Roman monuments in Nîmes are on a greater scale than in other French cities, and the most imposing and impressive of them all is the Arènes, the Roman amphitheatre. Built to entertain over 20,000 Roman citizens of Nîmes, it is one of the best-preserved examples of its kind in the world.

In Roman times the events included re-creations of hunting, gladiatorial fighting and famous battles. It is strange to think that during its long history the Arènes were used as a fortress and as a small village, complete with houses built within the old walls. Today it is widely used for concerts and bull-fighting, but also for the annual Roman Games, the biggest living history event in the south of France. 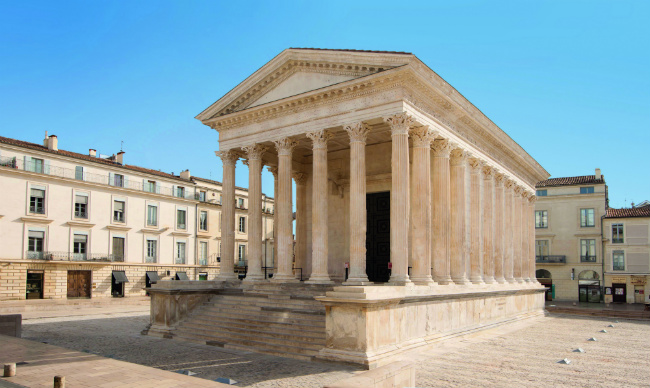 The Spanish influence is strong in Nîmes. Refugees from the Spanish Civil War came here, as did others from North Africa in the 1960s. Visit the city during the twice-annual Feria and you will experience a kind of collective Iberian madness as Nîmes parties in Spanish style. Pastis, sangria and Fino sherry are the order of the day at the bodegas; women dress up in flamenco frills and the town comes alive with concerts and processions of horses and bulls.

There’s a bull-fighting tradition here too, of course, and the amphitheatre is the spiritual home of two different strains. The Spanish-inspired corrida is the infamously controversial version which pits bullfighter against bull in a fight to the death, almost always of the bull. The corrida is actually banned in France (as it was recently, albeit briefly, in Catalonia) but is nevertheless permitted by exception in certain southern cities. Then there is the course camarguaise, which involves athletic young men out-racing the speedy little bulls. Afterwards the bulls get to return to the pastures of the Camargue. I know the version I prefer. 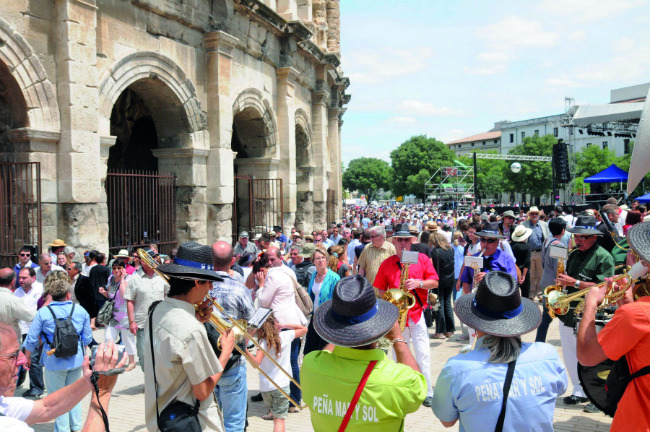 If the Feria in May or September sounds too heated for you, never fear: there’s plenty going on in Nîmes at other times of the year too. January sees a Flamenco festival welcoming Spanish and French talent and in the same month is France’s national festival of biography, where around 30,000 people converge to celebrate this literary genre. In July and August you can enjoy Thursdays in Nîmes – les Jeudis de Nîmes – artists and craftsmen, antique vendors and local artisans set up in many squares, to the accompaniment of live music of every flavour. The summer Festival de Nîmes is also a big-ticket attraction for pop and rock fans: Bob Dylan, David Gilmour, Sting and Jean- Michel Jarre have all played here in recent years.

Nîmes has some stiff competition in the tourism stakes. An hour or so by car from Montpelier, re-born Marseille and the cultural honey-pots of Arles, Avignon and Aix-en-Provence, it has its work cut out to attract visitors. But this may all be about to change: 2017 witnessed the final stages in Nîmes’s application for UNESCO World Heritage status, with a decision due in 2018. Such an endorsement would give a huge lift to the visibility and reputation of the city in the travel and tourism world; so 2018 may be your last chance to see the sights before visitor numbers boom. 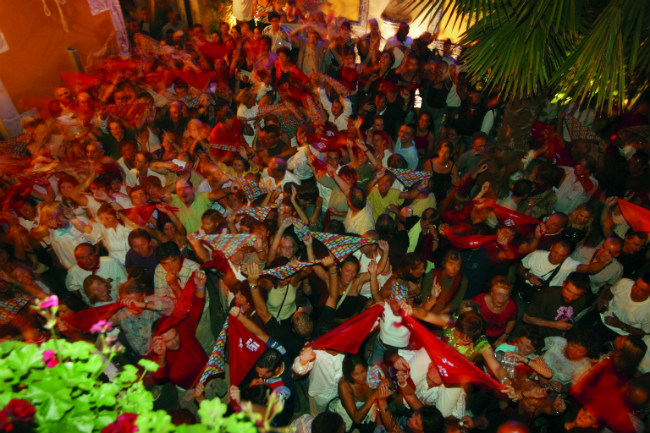 How this must have impressed Rome’s colonial citizens! And that was the idea, to entertain whilst conveying a message of power and influence. Open daily. Roman Games 2018, 28-30 April. www.arenes-nimes.com

Dedicated to Gaius and Lucius Caesar, the adopted sons and heirs of the Emperor Augustus, it was built as a temple, but the following twenty centuries saw it used as a house, meeting place, barn and even a shelter for animals. It costs €13 to visit the Arènes amphitheatre, the Maison Carrée and the Tour Magne.

Escape the bustle of the city and admire the Classical designs and serenity of these 18th-century gardens which celebrate the Nemausa spring.

Housed since 1993 in the building designed by Norman Foster, the collection of the Musée d’Art Contemporain features some 480 works of contemporary art from the 1960s onwards, celebrating art in France, a Mediterranean identity and art in English-speaking countries. Open from Tuesday to Sunday. 10am-6pm, €5. carreartmusee.com 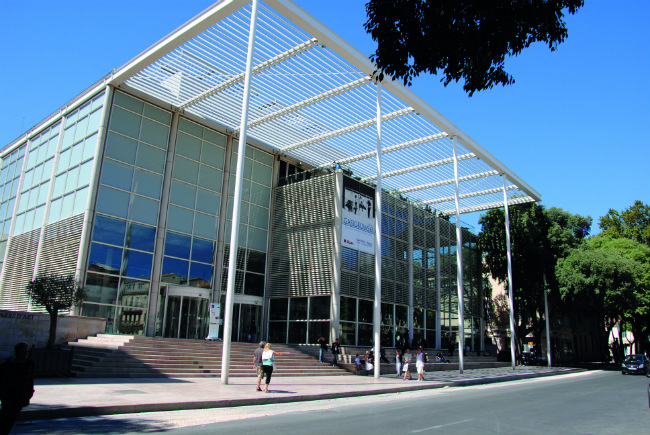 BY PLANE: There are direct flights from the UK to Nîmes (FNI) with Ryanair from London Stansted.

BY CAR: Take the A6 out of Paris as far as Orange and turn west onto the A9, as if heading for Spain.

BY TRAIN: Nîmes is about 3 hours by TGV from Paris Gare de Lyon.

Previous Article Loire Valley Vineyards: Merrymaking Days at the Château du Petit Thouars
Next Article Things to See and Do in the Rhône-Alpes