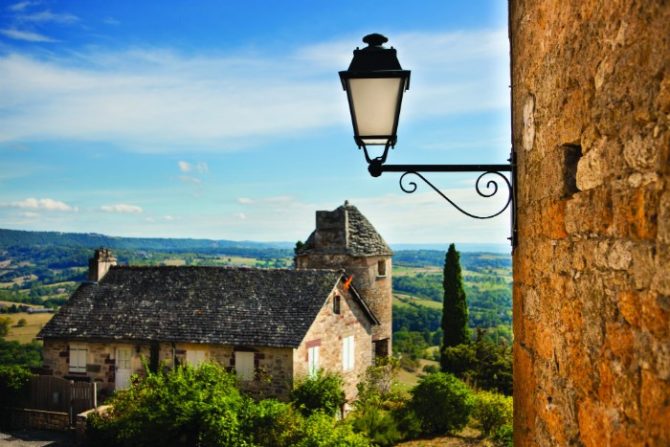 At 9.30am on a cool, somewhat damp French morning, the bar is already open, albeit in the name of research. Recalling the phrase ‘it’s always five o’clock somewhere’, I eagerly take my first, guilt-free sip of vin paillé, a sweet, sherry-like oxidised wine crafted in only a handful of French regions, including here in the Corrèze, the departément of the Limousin to the south of Limoges and east of the Dordogne.

This early morning tipple is cheerfully poured for me in the farm shop of Jean Mage, the winemaker at the Domaine de Chirac. Vin paillé comes in red or white and it’s a heavenly drop, even at this unsaintly hour. Best served chilled, as an aperitif, its name comes from the straw on which the ripest grapes once sat – from harvest until Christmas – prior to the production process. The wine was traditionally only drunk on special occasions, such as weddings or village fêtes, until a renaissance in the 1990s saw the creation of a syndicat to promote it to a wider audience.

My day had already begun in some style – just half an hour earlier I was lording it up with a quiet solo breakfast at the nearby Château de la Grèze. This petit déj was memorable for many reasons: the fog-cloaked fields dotted with cows beside the Dordogne river, a breakfast feast of gargantuan proportions featuring only local gourmet goodies, and the warmest of morning greetings by my amiable host.

I’m essentially in the region to eat and drink my way around this verdant central French heartland, home of prized walnuts, duck and chestnuts, taking time out en route for note-taking stops at picture-postcard villages in between courses. The omens were good: the previous evening here I had dined heartily and hungrily on Quercy salad – a rich and tasty combination of duck breast and gizzards, foie gras, perfect salad leaves and market-plump tomatoes – followed by guinea fowl roasted with fruit from the château’s figuiers (fig trees). All of this fine repast was expertly prepared by my charming host Anne France who, with her husband Jean-Philippe, has lived and worked here since buying the place to renovate it into a chambre d’hôtes during 1998. Fully gorged on fabulous local fare, I was out like a light in the guest quarters of this splendid 18th century castle and well set for my series of village visits.

In Praise of Beauty

I already knew that Corrèze was particularly blessed in the prettiness stakes, with five on the prestigious Plus Beaux Villages list: Collonges-la-Rouge, Curemonte, Saint-Robert, Ségur-le-Chateau and Turenne.

I also knew that Collonges-la-Rouge was the daddy of them all. It was there in 1981 that its visionary mayor, Charles Ceyrac, created the Plus Beaux Villages de France organisation, in order to unite and protect some of the country’s most attractive communes under a single banner of heritage and promotion. Now there are 157 villages in 21 regions on the list, with a visit to each guaranteeing high standards of visitor hospitality and careful preservation of historical sites plus more practical necessities, such as sufficient parking and plentiful accommodation. Looks alone aren’t enough to make it to the top table…

Restaurateurs and tour guides are another essential part of the mix, when you seek to understand what makes a village tick, while the welcome is extended where possible to the visually handicapped, with sensory visitor circuits, visitor booklets in large print or Braille, as well as audio guides. The association is keen not to simply create either soulless ‘museum villages’ or ‘funfairs’, but rather to maintain their elegance and vibrancy through a strategy based on quality, reputation and development.

“Our well-reasoned and passionate ambition is to reconcile villages with the future,” says Maurice Chabert, the current Chairman of the organisation, and the Mayor of Gordes in the Vaucluse. “And to restore life around the fountain or in the square shaded by 100-year-old lime and plane trees.” The future is clearly as important as the past when it comes to showcasing France’s loveliest rural destinations.

I’d seen plenty of photos of Collonges and yet, in the flesh, it truly wowed me. Approaching this red-brick beauty, I first spied its celebrated slate roofs and turret tops, the compact, rust-coloured village beautifully framed within a clutch of copses. Upon closer inspection, the colour and majesty of the ancient buildings is a joy to behold.

I wove through the intimate, narrow streets – many still decked out with late-summer blooms – to explore its most noted historic buildings: The Black Penitents’ Chapel, Église Saint-Pierre and Maison de la Sirène. With such architectural marvels on show, you can see why our friend Monsieur Ceyrac was so keen to preserve and show off this fine village all those years ago. Also recommended for those seeking gifts to bring home is a stop at the Atelier des Couteaux, where you can buy beautiful handmade pocket knives, complete with the local emblem – a chestnut tree leaf – on the handle.

Lunch also came with a view – at the base of the village is Auberge des Benges, which overlooks vineyards. From the skilled, youthful culinary hand of Christophe Chanel comes a simple menu that’s big on provenance, as is standard procedure in rural France. La carte even includes a list of where Chanel sources his ingredients – from guinea fowl and mushrooms to duck, veal and cheese. I select a Limousin veal chop with seasonal mushrooms, followed by a walnut parfait drizzled with walnut liqueur – both are sensational. It’s great to know that the next generation of passionate French chefs is quietly going about its business with such pride and care, bringing regional dishes to the fore and shining a light on local producers.

Just 9kms away lies Turenne, the second Plus Beau Village on my radar. It couldn’t be more different to squirrelled-away Collonges, as it looms on a high promontory. Boasting a honey-stone hideaway of an ancient village within its walls, this is archetypal rural France at its mesmerising best.

To work off lunch, I trek up to Château de Turenne, to meet its amiable owner, Camille Zambaux, before taking in the spectacular 360-degree panoramic view of the paysages from the majestic Tour César.

Below, the Chapelle des Capucins and turreted houses from the 15th to 17th centuries point to a period when a succession of four grand families held the town as a Viscount’s stronghold, before it was sold to Louis XV, to pay the gambling debts of Charles Godfrey, the last of the Viscounts of the La Tour d’Auvergne family. Needless to say, the Viscount and his citizens soon became the obedient subjects of the house of Bourbon ruler…

That night’s dinner at La Maison des Chanoines featured noix in several guises, including mussels in a piquant sauce of ‘green’ walnut – picked before they ripen and the shells form. An honorary mention for the humble walnut here – it’s granted kingpin status in this region, after all. If walnuts aren’t being sprinkled on salads, they’re in a liqueur and because it’s harvest time, everywhere I go I see old gents bent double, filling their sacks, or more mechanically-minded farmers zipping up and down with tractors, shaking trees and sweeping up the prized noix to clean up and sell at market.

They’re also at the fore in Brive where, the next morning, I head to the Denoix walnut liqueur distillery. My visit is hugely enjoyable, thanks to the energetic presence of owner Laurent Vieillefosse, who provides a company history and tasting – here I go again, drinking on the job before 10am. The distillery has been in the family since 1839 and Vieillefosse has worked there for 27 years. All of the old machines are still in use and they get through 8-12 tonnes of nuts a year. The venue has a wonderfully vintage, apothecary-like feel and the digestifs are splendid.

Back on the road, there are two more rustic eye-pleasers to enjoy. Neither Argentat or Beaulieu-sur-Dordogne have quite made Plus Beaux status (yet), but they possess ample ‘come-hither’ appeal. The former, accessed via a sweet bridge offering an eagle’s view of the village, boasts an expansive cobbled quay that was formerly a port for gabares – flatbottomed boats, one of which now offers pleasure rides.

Argentat’s wealth stemmed from wine-based river trade with Bergerac, Libourne and later the Netherlands, all of whom were grateful recipients of oak for wine barrels and vine stakes. Today, lined with cafés and restaurants, it’s an atmospheric historic centre to amble around and is the perfect place for a couple of hours of people-watching before ducking into little ruelles or browsing the quayside galleries.

Beaulieu-sur-Dordogne, set in a wooded valley, is just as easy on the eye – you can admire the lovely market square and medieval houses, and the huge Benedictine abbey church, the Abbatiale Saint-Pierre, replete with a stunningly sculpted south portal. Its 1135AD tympanum, unusually, depicts the ‘Second Coming’, rather than the ‘Last Judgment’ seen at Conques, Autun or Amiens.

The best time to visit is surely when the famous strawberry festival takes place, on the second Sunday in May. Thousands flock to the Fête de la Fraise, to taste an array of delicacies, enjoy cookery displays and then witness the creation of a giant strawberry tart made by local patissiers. I can’t think of a more colourful and inviting event around which to plan a return to this fabulous corner of France.

The Limousin: How to get there, accommodation, places to eat , where to visit & more…

Previous Article Singin’ in the Rain at the Théâtre du Châtelet, Paris
Next Article French Film Reviews: Mon Roi (My King), Story of an Homme Fatale