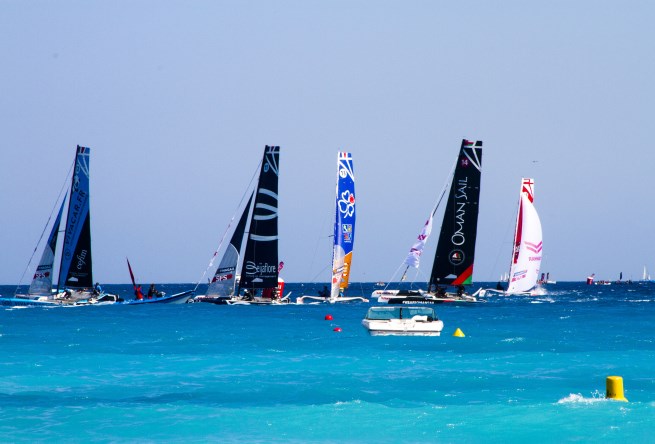 “Since 1978, thousands of sailors have discovered the French coast, got pushed back by the Channel currents, asked their position to Brittany’s fishermen and heeled under the Mistral wind. From a joyful racing-cruising event, the Tour de France à la Voile turned into a great offshore sailing school for many young and talented sailors, and then a high-level competition with great champions taking part.”  -Tour de France à la Voile

Starting in Dunkerque on the north shore of France on July 7, with 9 stages along the coastline of France, the 40th Tour de France à la Voile 2017 ended in Nice on July 29, 2017. I was lucky enough to catch the last three days of the race by chance. A longtime fan of the Tour de France for bicycles, I was surprised to learn about the sailboat race and its long history. Where have I been all my life?

This race is not only about skillful sailors, though, but also about the boats. Each year a different boat is featured; this year, it was the Diam 24, “a beautifully built, impressively simple trimaran designed by multihull masters VPLP and built in Port La Foret, France.” With a top speed of 26 knots, they fly through the water.

Thirty-one boats and crews started the race in Dunkerque, finishing the race in Nice. Most of the stages took place on the north and west coasts of France, with one segment on the southern coast of Spain. Each stage was approximately 74 kilometers (40 nautical miles) and lasted about three hours. Along the way, as with the Tour de France, awards were given for various accomplishments, i.e. the Finnegaz Award for Combativeness, which went to Michel Desjoyeaux for “team spirit, performance and technical expertise.”

The champions of this year’s race were the crew of the colourful orange and blue “Des Pieds & Des Mains,” a twist on the French expression, faire des pieds et des mains – literally ‘do something with the feet and the hands,’ i.e. put all your effort into it. 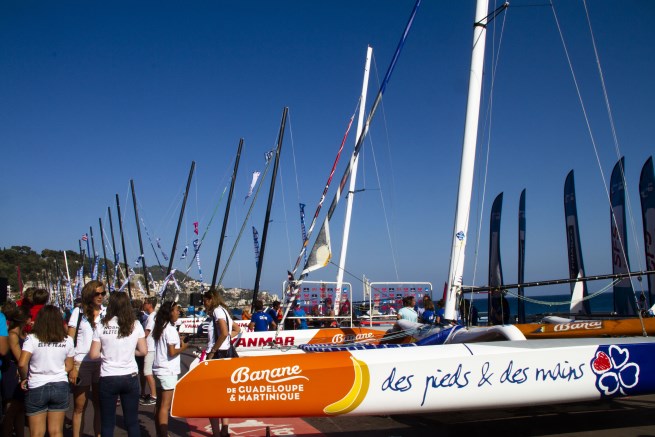 It was sponsored by Fondation FDJ, and skippered by Damien Iehl and Paralympic Gold medalist, Damien Seguin, so the name makes perfect sense. The FDJ Foundation is a French group, which supports, among other things, the inclusion of persons with disabilities at all levels of sports. “Persons with disabilities are sportsmen like the others. The FDJ® Corporate Foundation has defended this belief since its inception.”

“Twelve years after his gold medal in Athens, eight years after the silver in Beijing, Damien Seguin definitively entered the Legend of Sailing on September 17 at the Rio 2016 Paralympic Games, winning his second gold medal!”

NM: What was the objective to have a handicapped team in this race?

FQ: It is truly to help make a change to the way people regard the handicapped. It is a project started three years ago…our initial objective was to simply place in the top 5. To go past that and win the final victory was completely unexpected.

For me, it was a wonderful surprise to be in Nice, and to realize this beautiful race was unfolding before me as I lay on the beach at the Opéra Plage watching the colourful sails racing past. At the end of each day’s race, the boats and crews were lined up along the Promenade des Anglais, shining wet hulls, and color-coded crew members posing for photos and popping champagne.

What better place for the grand finale of this beautiful race than the sparkling blue shoreline of the Côte d’Azur. Following on the coat tails of the Bastille Day commemoration, the Nice Jazz Festival and the Ironman competition, it is just one more of the incredible events happening in the summer months in this exciting corner of France. 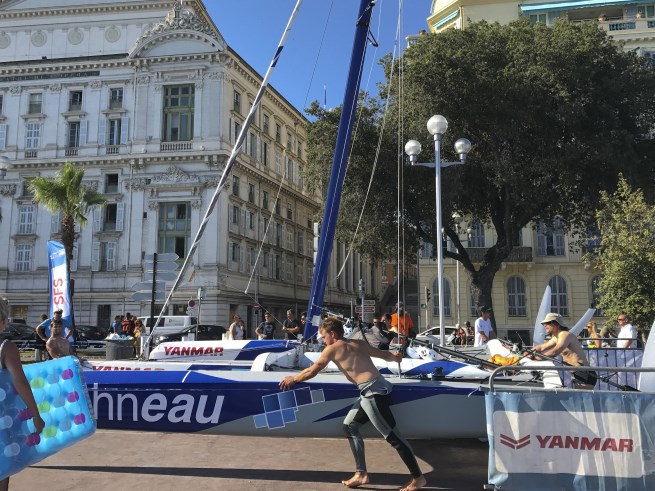 After the Race Photo © Ann Fournier

For more photos of the race and the winners, visit the Tour de France à la Voile website: www.tourvoile.fr/en

Cruise to Corsica with CroisiEurope

Boat Bike Tours: Where to Find the Best Backgrounds for your France Pics