The Quiet Side of the Côte d’Azur 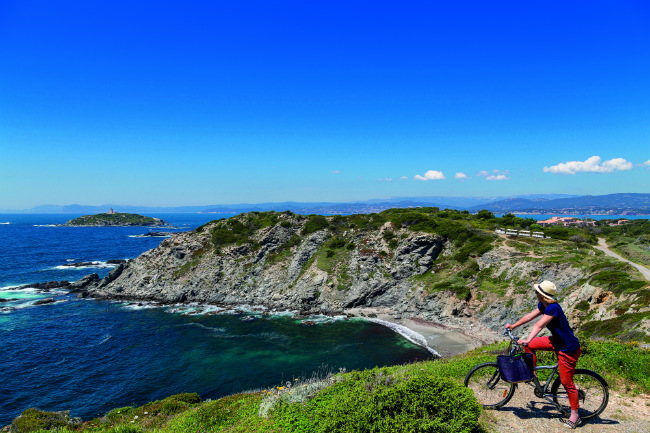 Travellers seeking a laid-back beach experience tend to shy away from the Riviera. Yet, to the west of the glittering towns lining the Côte d’Azur lies a more tranquil counterpart that remains under the radar

Yacht-clogged harbours, all-night casinos, designer shopping… The glamour and glitz associated with Monte Carlo, Cannes and Saint-Tropez is just half the story. On the western stretch of the crescent-shaped coastline that forms the Côte d’Azur, between Toulon and Marseille, lies a different world of sun-drenched shores and age-old fishing villages with a character all of their own. Cassis, the most famous town here, is the jewel in the crown, but there are hidden gems aplenty, and travellers looking for some relaxed fun in the sun have more than enough to choose from here for an unforgettable adventure. 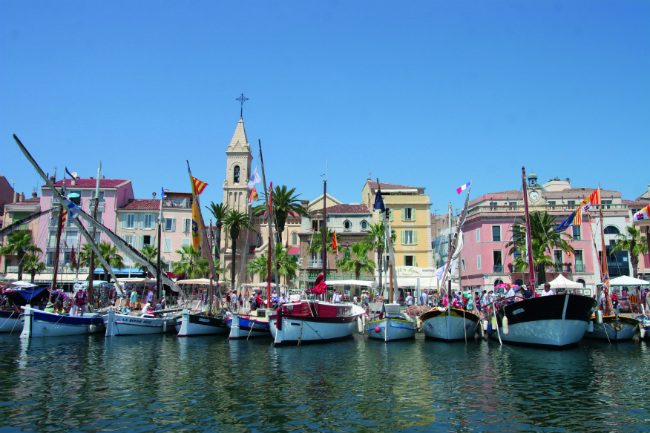 As the home of the French navy, industrial Toulon is not a place most people would think of for a summer holiday. But a 10-minute ferry ride from the city’s busy harbour drops you in tiny Saint-Mandrier-sur-Mer in the Var; a jagged peninsula that juts out into the Mediterranean, whose 25 miles of coastline shelter fishing harbours, secret coves, boundless sandy beaches, gorgeous turquoise waters, pristine woodlands and an archipelago of tiny islands virtually unknown to tourists outside France. 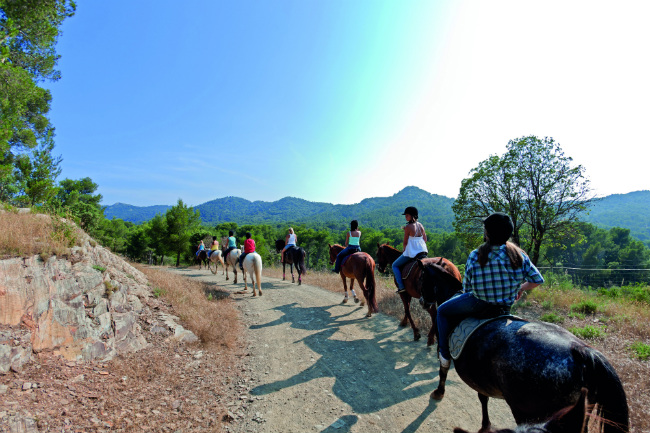 You don’t have to arrive via Toulon, but those who do head straight to Saint-Mandrier for its sprawling white-sand beaches – Les Sablettes, Saint-Asile and Cavalas – facing a typically turquoise sea. But before you settle down to sunbathing, spend an hour or two strolling around this charming fishing village’s compact port, framed on three sides by steep, wooded hills. 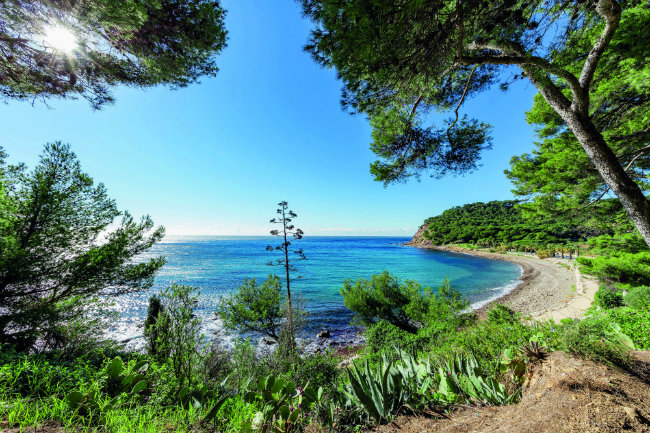 Down the coastline, and reachable only by bike or on foot in July and August, a wild coastal footpath extends from Saint-Mandrier all the way to Sanary-sur-Mer, and you can hop on and off at any point in between. Intrepid hikers will not want to miss Cap-Sicié at the tip of the peninsula, within the protected Cap-Sicié national forest. Rising to 1,250 feet at its summit, the cape offers stupendous views of the Var and the entire Provence coastline. On the way up, you’ll be shaded by Aleppo pines and towering oaks and pass falcons and seabirds as they catch the thermal breezes. 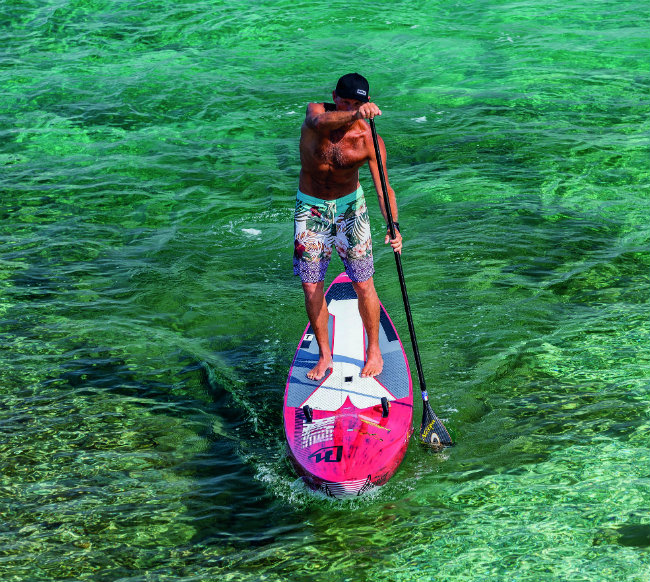 Five principal islands at the western tip of the peninsula make up the Embiez archipelago: Île des Embiez, Petit and Grand Rouveau, and Petit and Grand Gaou. The largest, Les Embiez, was purchased by Paul Ricard, the inventor of pastis, the anise liqueur synonymous with Provence, in 1958. Ricard was an early environmentalist and used his vast fortune to secure several islands to preserve their spectacular plant and wildlife species. Wild Embiez has many claims to fame: foremost, its port, a favourite among international yachtsmen, divers and snorkellers; as well as its pristine pine forests, hidden coves, crystalline waters and 25 acres of vineyards producing AOC whites, reds and rosés. 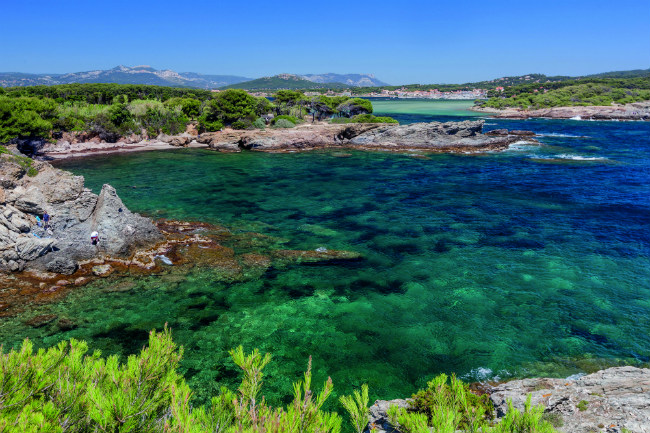 Embiez is also home to the conservation-minded Paul Ricard Oceanographic Institute, whose mission is “To know the sea and to protect it.” There are no automobiles on the island, but visitors are free to traverse its six miles of coastal trails, bird sanctuary, beaches and hidden coves.

The two tiny paradises of Petit and Grand Gaou, reachable by foot or a small train from Port du Brusc on the mainland, make for an idyllic afternoon in the sun on beaches where you can easily find yourself quite alone. Back on the mainland, from Cap Nègre it’s a hop to Sanary-sur-Mer, whose postcard-perfect port, lined with cheerful, sherbet-hued buildings draws the summer crowds. In spring and autumn the town empties out and you can join the locals at the Wednesday portside market without a crush of tourists, dine lazily in a waterfront café then amble along the pretty quays. 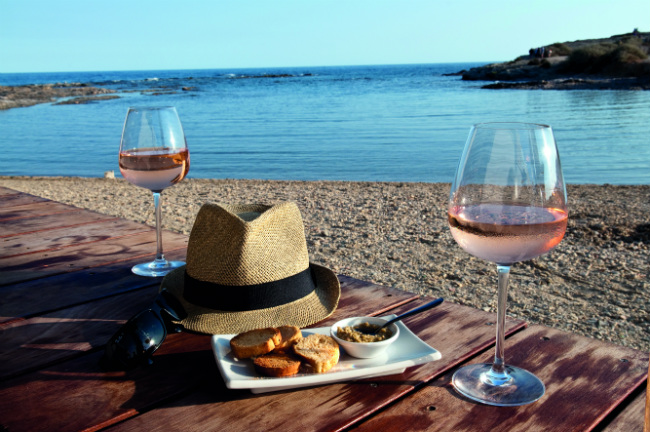 Rosé and tapenade with a view in Le Gaou.

The port itself is small and in a single afternoon you can explore its main attractions: the luminous murals of 19th-century Saint-Nazaire church, a 13th-century tower and scuba-diving museum, and the 100 traditional boats, all of them listed historical monuments, that are moored at the port.

Armed with a map from the tourist office, you can also visit the town’s many oratories or nine ancient chapels. But if you only visit one, make it Notre-Dame de Pitié, at the far eastern edge of the port, well worth the uphill climb for its lovely setting and panoramic views of the bay. 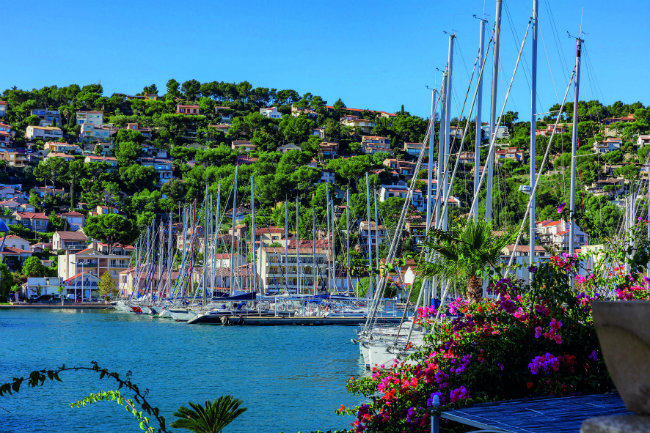 From Sanary, you can walk the two and a half miles over the coastal path to Bandol, enjoying sweeping views along the way, or hop on a bus if you’re not travelling by car. Though not as picturesque a port as Sanary, from Bandol a 10-minute ferry ride lands you on the Île de Bendor, which was also bought by Paul Ricard. In contrast to the wild nature of the Île des Embiez, this islet is quaint, small, and traversable in an hour. You can visit an artists’ colony and purchase its wares, stroll along a seaside path, refresh at a wine bar, food truck or upscale restaurant, then stay overnight in one of several luxury villas with views over the bay to Bandol, or at the Delos hotel. The island is open only in the summer months so expect crowds, unless you go late in the season. 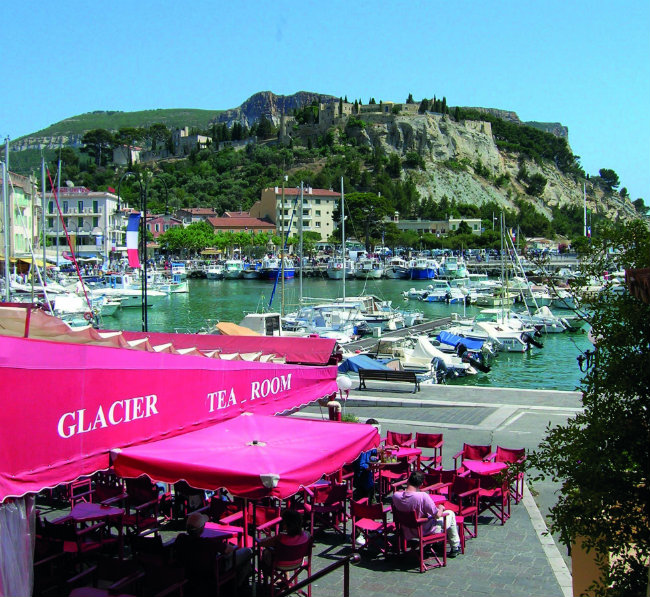 Wine is perhaps Bandol’s biggest claim to fame; its reds and rosés were sought after long before Provence became a serious player on the French wine scene. Domaine Tempier’s prestige extends worldwide and tiny Domaine de l’Estagnol produces excellent red and rosé wines at affordable prices. But there are many other notable vineyards that will take you inland past some sleepy villages worth stopping in or staying overnight, as they are also the setting for two of Provence’s top five-star spa hotels with Michelin-star dining: Le Castellet (Hôtel & Spa du Castellet) and La Cadière-d’Azur (Hostellerie Bérard & Spa). 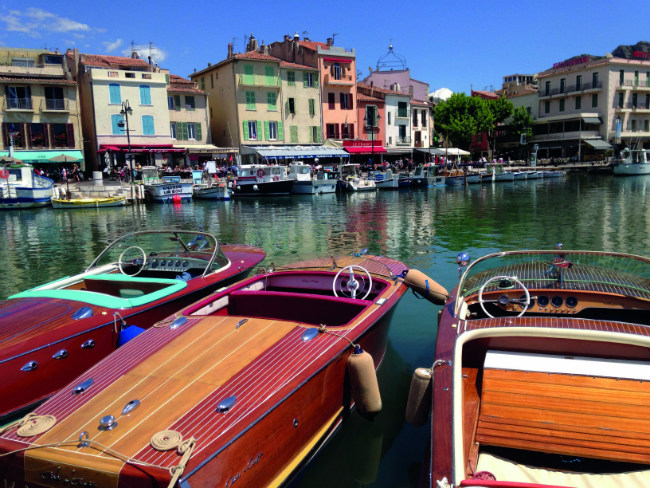 Out of season, visitors can almost imagine the sleepy fishing village Cassis once was. Fishermen still moor their boats in the harbour to display the daily catch.

At any of the cafés lining the port you can dine on the local oursins – freshly caught sea urchins sliced open and served with a dab of spicy olive oil and a squeeze of lemon, to be scooped out with bread and accompanied by a crisp, white Cassis wine. Such a treat is hard to find outside Provence – or even Cassis. Sheltered by the fiery red Cap Canaille (the highest maritime cliff in Europe) towering dramatically above the town, and its foothills sloping to the sea, Cassis’s micro-climate brings to the wines a delicate salinity from the salt air and a pleasant minerality bestowed by the limestone soil. 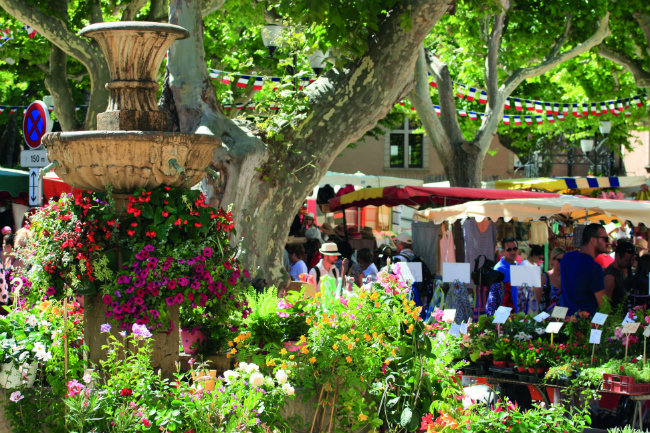 Gourmets appreciate Cassis’s mouthwatering dining scene. Quayside bistros offer the catch of the day or bouillabaisse. Its two wine bars proffer the local vins, and Villa Madie, Dimitri Droisneau’s Michelin-starred restaurant and brasserie set on a hillside, is known as much for its truly superb seafood as for its breathtaking views over the bay.

Strolling around town, dodging in and out of boutiques or loitering on the sprawling white-sand beaches that flank the harbour, are the kinds of easy pleasures that bring French holidaymakers back to Cassis year after year. The town’s other draw has more to do with its privileged setting within the Parc National des Calanques. 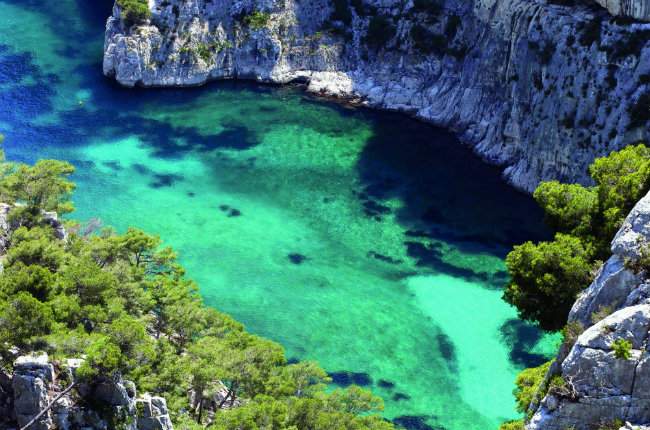 Hidden like little slices of paradise among the tall cliffs lining the Cassis coastline all the way to Marseille, dozens of astonishingly blue calanques can be explored on foot or by boat. There is no access by car unless you’re willing to park and walk a couple of hours. From Cassis, boat-lined Port-Miou is the easiest to reach via a fairly easy 30-minute hike from the town centre. A half-hour further lands you in Port-Pin. En-Vau, the prettiest of the three, requires a more vigorous walk an hour beyond Port-Pin. All offer the irresistible contrast of glittering turquoise water between plunging cliffs and white-sand beaches. 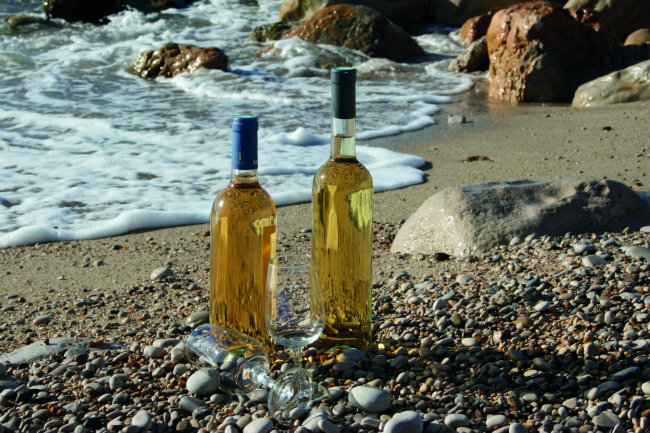 There are many calanques between Cassis and Marseille, and if you plan on hiking you will need to pick up a map at the tourist office at the eastern edge of the quay near the beach. You can also join one of the many two- to five-hour boat trips from Cassis harbour through the calanques, some with stops, others just for the view.

The calanques’ rare and fragile ecosystem is rigorously protected by the French parks system, and you will need to check weather conditions before setting out anywhere in the park. During the furious winds of the mistral, which can whip up at any time of year, the park is closed.

For the area’s best views, hike or drive up the Route des Crêtes, at the edge of Cassis, which summits at the top of Cap Canaille – where there is a lookout point and parking – and continues along the coastline. 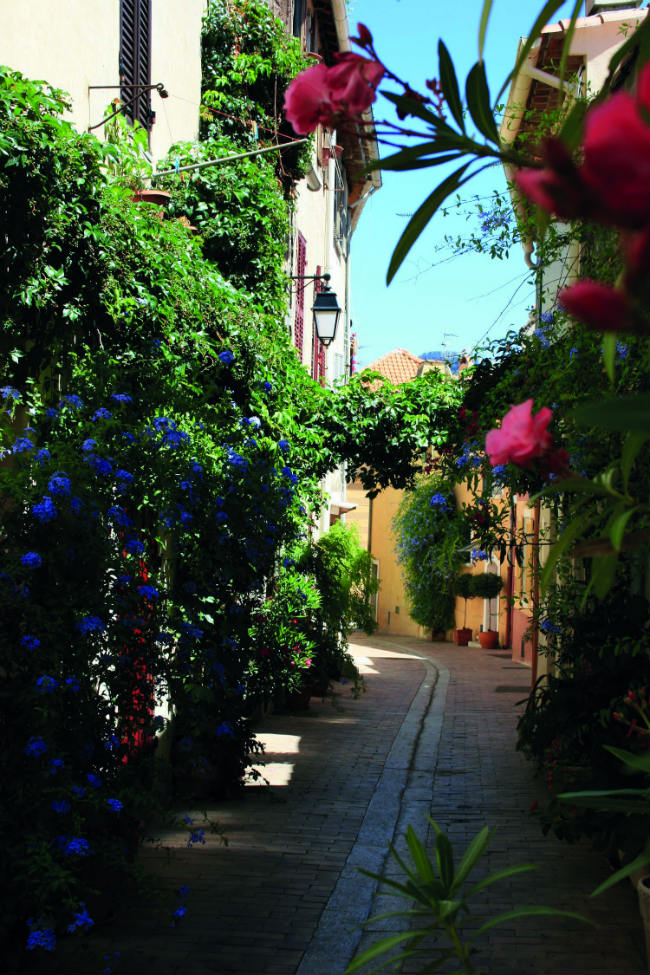 A tour of the vineyards surrounding Cassis affords a gentler walk or an ideal bike ride. Clos Sainte-Magdeleine, gorgeously set between the foothills of the cape and the sea, is a good place to start. And tasting here is a delight, as these graceful organic whites and rosés are some of the region’s best. Other top wineries to visit are Domaine du Bagnol, Domaine de la Ferme Blanche, Domaine du Paternel and Château de Fontcreuse. A party mood prevails on Thursday evenings at the Clos d’Albizzi, when tastings are accompanied by a food truck. Or you can sample all the wines at La Maison des Vins, a short trip out of town.

Cassis train station is reachable from Paris with a connection in Marseille (Toulon is a direct, four-hour train ride from Paris). I would highly recommend a stop in Marseille to explore its urban beaches and calanques and for the city’s fabulous cultural, shopping and dining scenes. 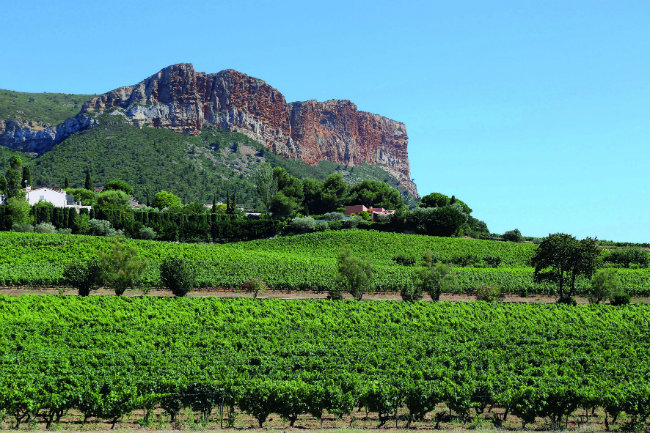 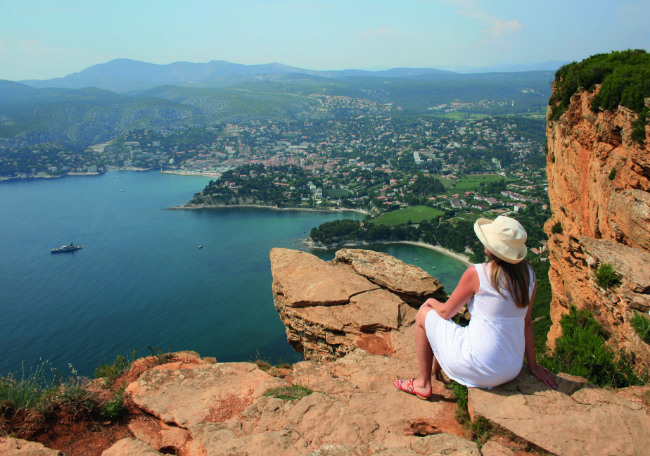 Previous Article Things to See and Do in Nord-Pas de Calais
Next Article The Best Drives in the South of France: Enjoy Classic Car Touring in Provence