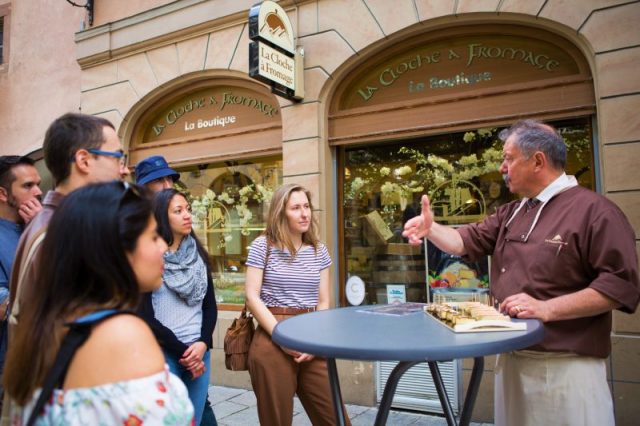 After spending the last few years happily eating my way around the country, I was starting to feel fairly confident in my knowledge of French gastronomy. However, when I began researching my first trip to Strasbourg, I realised that there would be a whole new cuisine to discover. So after joining Eating Europe on their first ever Paris food tour when it launched in 2018, I booked onto the team’s new Taste of Strasbourg tour, feeling confident that they could help me discover a new world of food in the Alsatian capital.

The tour kicks off at Place de la République, a short walk from the true centre of Strasbourg but an ideal spot for our tour guide Gracie to get things started with a quick history lesson and an introduction to the city. The 10:30am meeting time is not early, but as I like to eat as soon as I get up, with coffee very quickly after (I know I’m not the only one), I had to really try hard to hold out for breakfast. 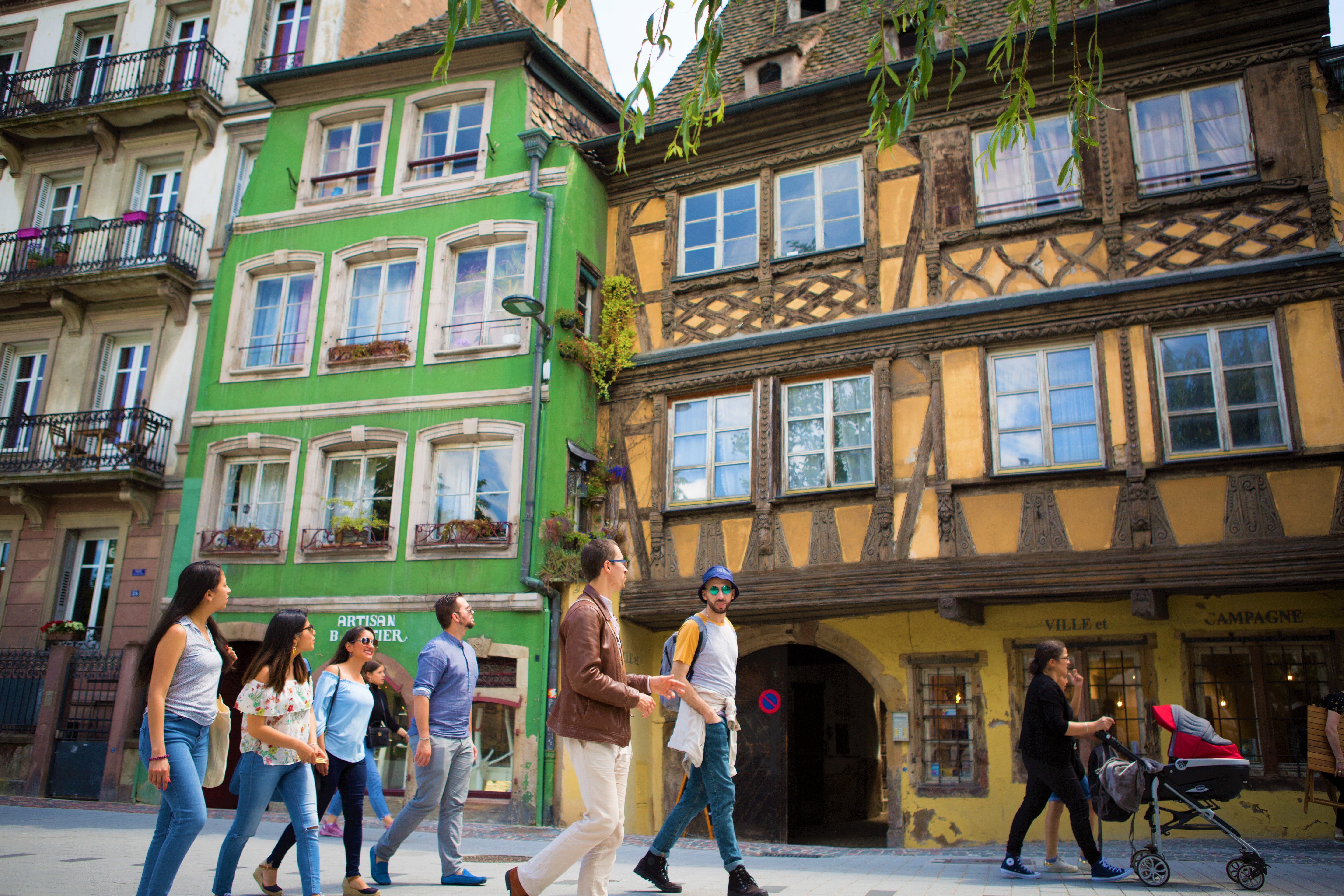 It was worth it though; Eating Europe start things the right way with a huge and delicious kougelhopf, the Alsace version of a brioche, but even better, as koghelhopf comes with almonds and dried fruit embedded into the soft sweet dough. As Gracie had chosen a gorgeous salon de thé for breakfast, to give us the chance to sit down and get to know each other, I thankfully also got my essential caffeine fix, something I always think is lacking on a morning food tour. 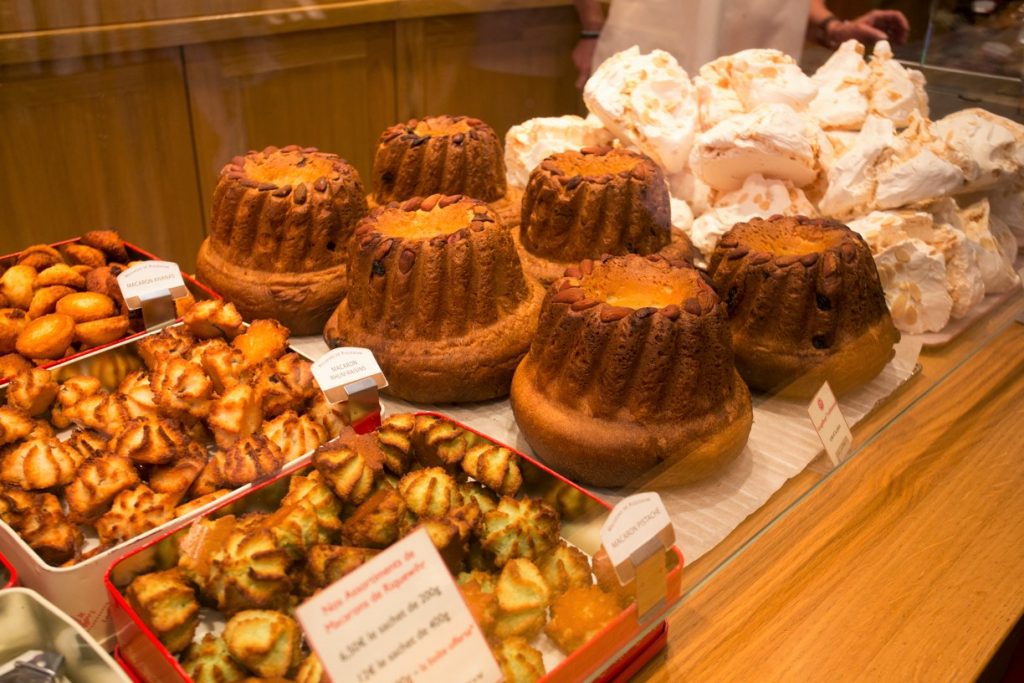 Feeling perked up by breakfast, and the coffee, I was keen to see what would come next. I couldn’t have guessed that it would have been the boulangerie (bakery) which I had already eyed up the day before. The bread displayed in the window had quickly caught my attention, which made sense when Gracie told us that it the bakery is owned by a three-Michelin star chef. After a quick look around inside (I noticed they also sell jams from Christine Feber, a favourite of mine and a good indicator that the bread would be a delicious friend to go with it), we left with two baguettes in hand to head to a family-run butcher’s just across the street.

Here we were prepared a plate of chacuterie, which is popular all over France but definitely has a more Germanic feel in Strasbourg, and was completely new to me. I tried a little bit of everything, which was not enough to fill me up but just enough to make me want to more at our next stop, a popular traiteur (similar to a delicatessen) to try bouchée à la reine. 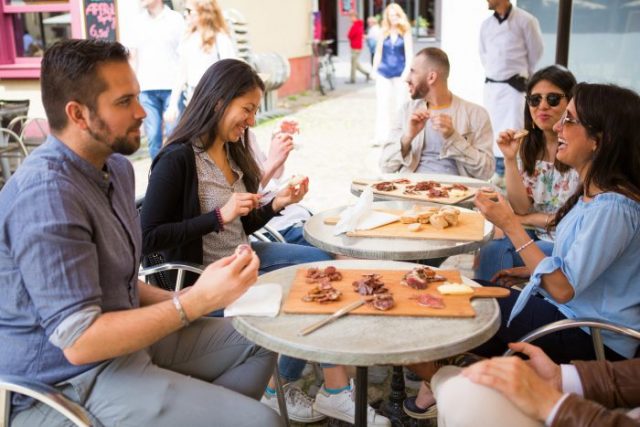 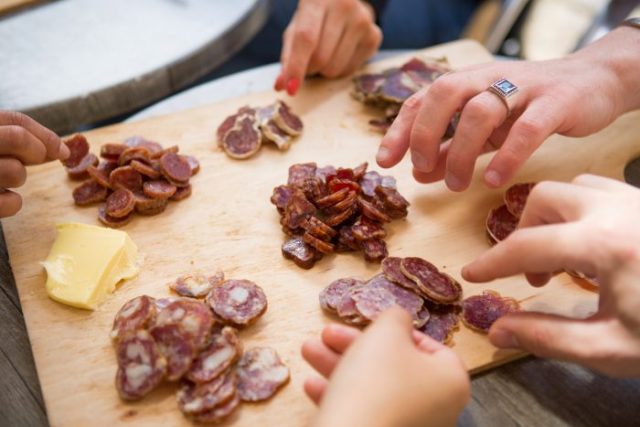 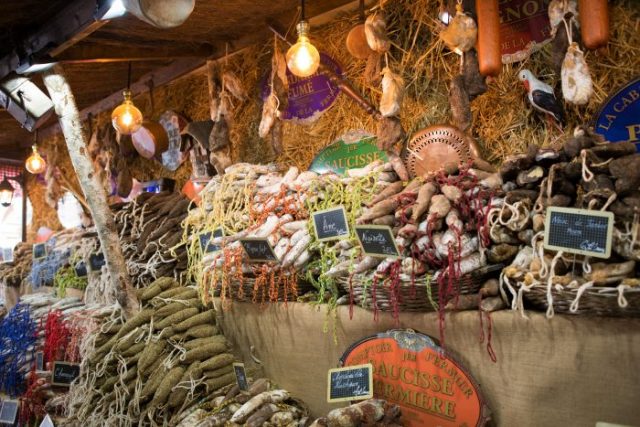 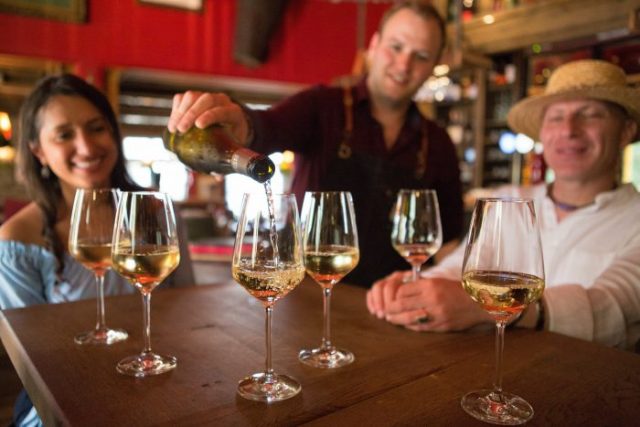 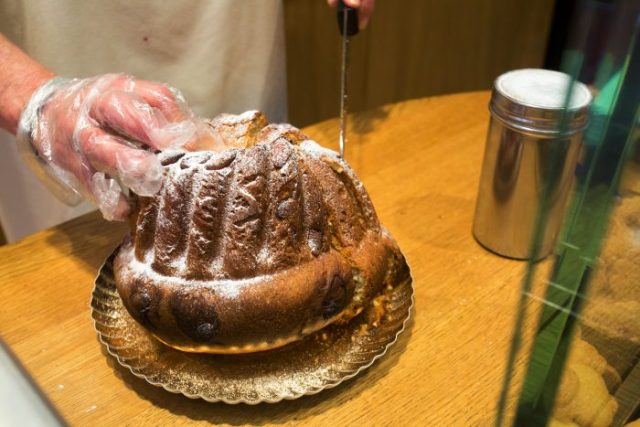 It was also time to enjoy our first glass of Alsatian wine, as Gracie regaled us with the royal history behind our simple dish of meat encased in puff pastry with a mushroom sauce. Here we were lucky to get a table, as the traiteur is a popular spot with locals on a Saturday morning, who are picking up dishes and desserts for a leisurely weekend lunch, but squeezing in with the Strasbourgeois definitely added to the charm. Gracie had planned ahead for our next spot though for a spot of lunch of our own, and one of my favourite parts of the tour. Not only was the setting impressive, a 15th century wine cellar, but after tasting flammekueche for the very first time, which I admit I hadn’t even heard of (and this is why I needed Gracie!) I wondered how I had managed to last so long in France without it! I made a mental note to hunt out this deliciously simple comfort food, which is just a thin pastry base topped with crème fraiche, onions, and lardons, when I was back in Paris. 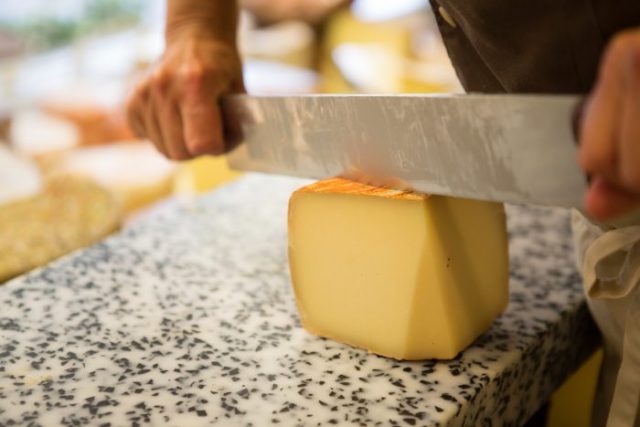 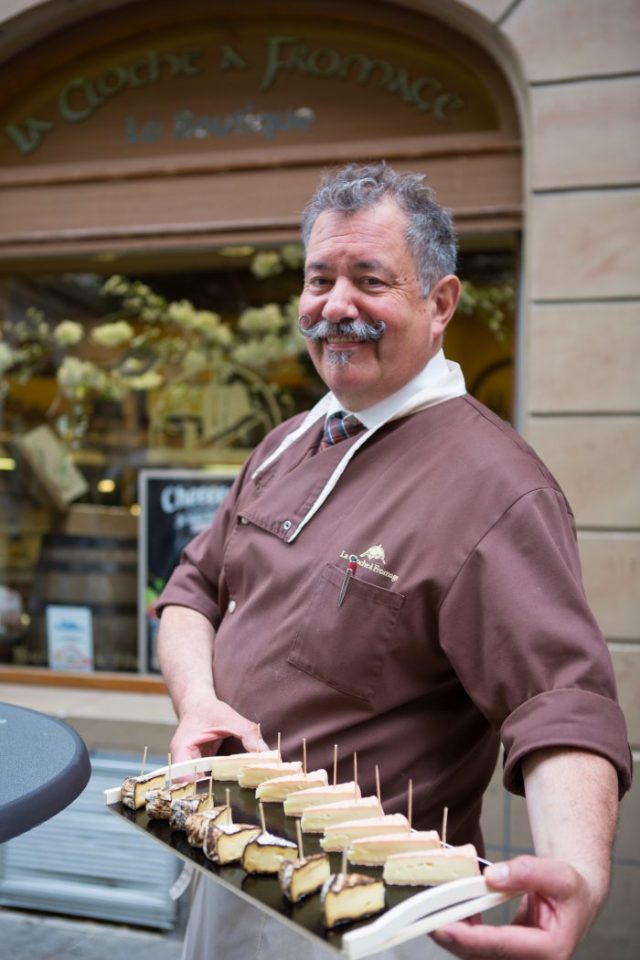 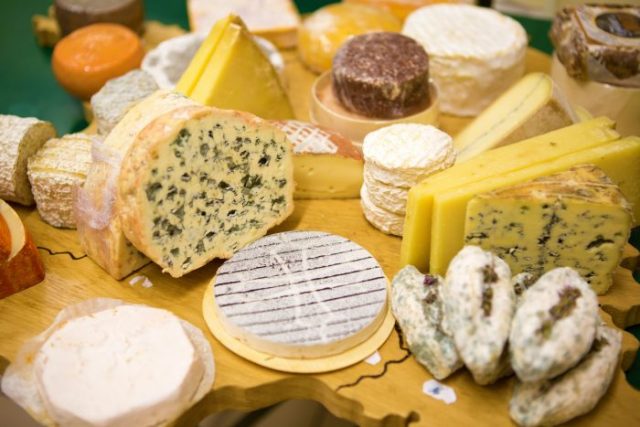 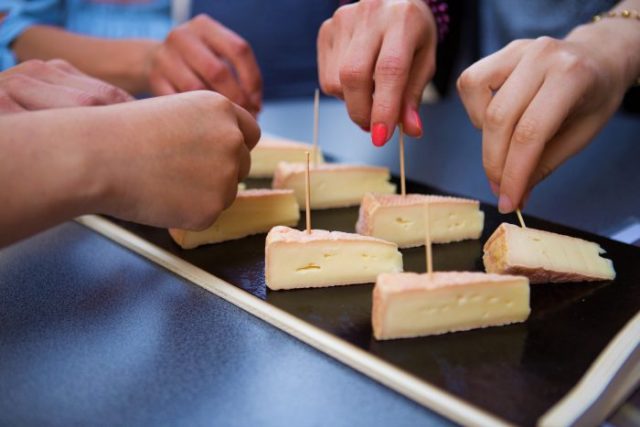 Of course no French meal is complete without cheese, so Gracie took us to her favourite artisan fromagerie, where not only do they sell cheese, but they actually make it themselves. Here we were given very chunky slices of local varieties to try (Eating Europe had fed is so well some were flagging by this point but I found the space to power through) along with another glass of Alsatian wine. As it was the cheese course I knew we were at the end of the tour, and despite all the food I was still hankering after something sugary (I blame my greed on being so spoilt with French patisserie!) and so I was delighted when Gracie whipped out a treat she had been hiding along; pretty in pink macarons which were the perfect sweet finish to a very tasty food tour.

Head to https://www.eatingeurope.com/strasbourg/ to find out more about the Taste of Strasbourg food tour, as well as the special Strasbourg Christmas Market Tour, Tasting & Ornament Workshop which launches on November 25 for those visiting during the festive season. 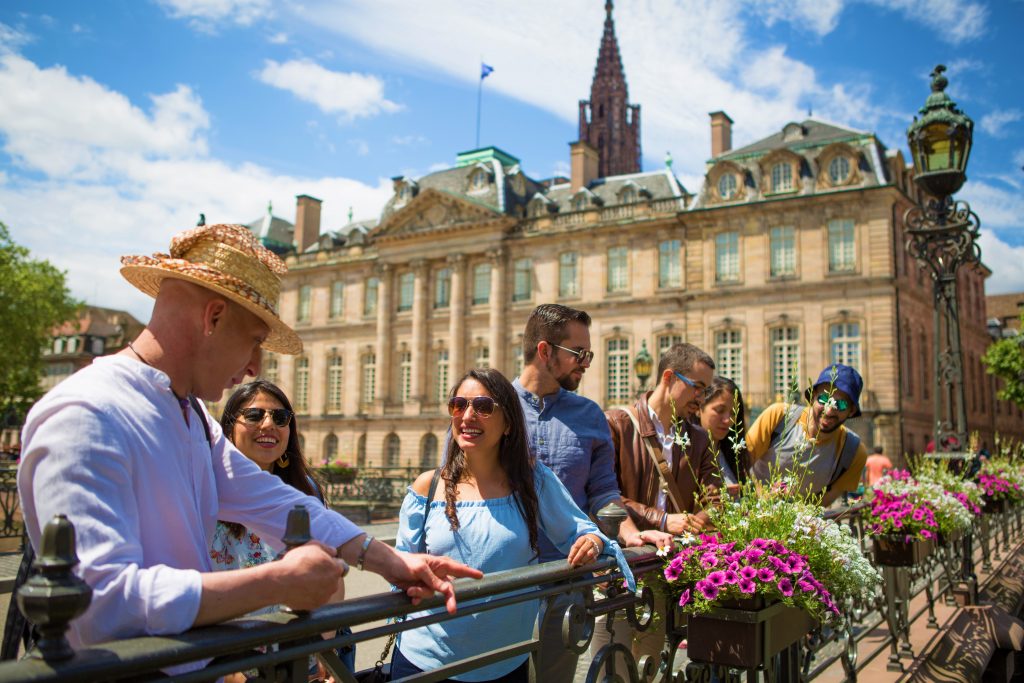