A Fête Fit for an Emperor in Vichy 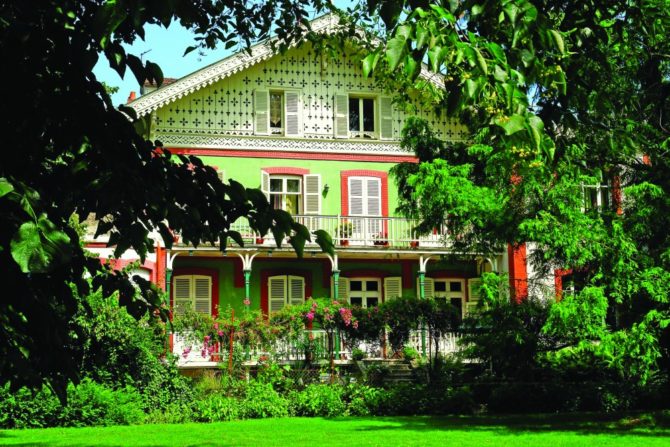 Louis-Napoléon Bonaparte was many things in France, including the country’s first president and its last monarch. But the inscription on his moustachioed bust, which sits atop a stone plinth in Vichy’s leafy Parc Napoléon III, also alludes to his role as Bienfaiteur de Vichy or Patron of Vichy. Between 1861 and 1866, the Emperor of the French made five trips to take the waters in Vichy. He also insisted on financing the improvements which he hoped would make Vichy the premier destination for thermal water treatments in France, adding a railway station, a casino (now part of the Opéra de Vichy) and an arboretum, which in turn encouraged hoteliers and restaurateurs to invest in the city.

“I am more pleased here than anywhere else, for this is my creation,” declared Napoléon, who built dykes along the River Allier, allowing him to reclaim 32 acres of land and expand the spa town further with the addition of a park filled with rare and exotic trees from around the world. To this day, Parc Napoléon III is overlooked by a row of perfectly preserved chalets, built to house the philanthropic emperor and his attendants over 150 years ago.

Since 2008, the local Vichyssois have paid homage to him in a springtime event billed as Jours d’Empire – weekend-long celebrations held either at the end of April or at the beginning of May. Among the highlights is a street parade of dancers in military uniform, corsets and crinolines and a grand ball with five-course imperial banquet.

Dancing in the Streets

The day of the street parade, the dancers performed a few group numbers from their repertoire at venues around the city – I saw six couples dancing in the aisles at the covered market – before making their way towards Vichy’s Parc des Sources, where a handful of horses were being groomed ahead of their part in the proceedings.

The dancers then ascended the steps of the Art Nouveau Opéra de Vichy and assembled themselves in front of an orchestra while they waited for ‘Emperor Napoléon III’ and ‘Empress Eugénie’ to arrive in their horse-drawn carriage. When they did, the crowd which had gathered in the Parc des Sources below looked on as the dancers took centre stage on the esplanade, performing a waltz, then a quadrille, as if they did so every day – underskirts and all.

Even when they weren’t dancing, the ladies in their bonnets and day dresses looked perfectly at home weaving their way among the pretty flowerbeds and pistachio coloured pavilions of the Parc des Sources, and indulging in some window shopping at the Galerie Source de l’Hôpital.

During the festival, there were entertainers dotted around the park, demonstrating such forgotten crafts as wet plate photography (complete with a portable darkroom), and also acts from an old-fashioned travelling circus.

Snaking its way around the perimeter of this park is a covered walkway linking some of the pavilions together, a number of which house the city’s many natural springs, each of which are named. Hall des Sources – the largest– has space for six drinking fountains, ranging in temperature from 21.5 °C (the Célestins spring) to 41°C (Chomel), plus potted palms, chairs and tables.

The thermal spring water, which is slightly sparkling, is used in many different ways: to make Vichy’s eponymous mint pastilles, as well as Vichy carrots, which are boiled in it for its health benefits – try Restaurant la Rotonde on the banks of the River Allier if you want to give them a go.

Doctors are still sending patients to take the waters in the hope of curing skin disorders and digestive complaints, and all visitors can bring along their own bottle to fill with water from the spring of their choice.

Alternatively, you can stop by a local spa for a treatment. I went to Les Célestins in Vichy’s ‘Quartier Thermal’, where the lady at the reception presented me with a pair of foam flip-flops and a white bath robe to change into. I was then shown to a treatment room upstairs with a water bed in the middle and a full body shower on standby. When my therapist arrived for my two o’clock mud wrap, she applied warm, mineral rich mud to my back, chest and legs, wrapped me in clingfilm, draped a foil blanket over the top and left me laying on the water bed just long enough to fall fast asleep… it was bliss!

Les Célestins is joined to a five-star hotel across the road, where visitors can enjoy a low-cal, three-course lunch complete with coffee, bread and local cheeses such as Cerilly or Chambérat. On my own 600-calorie menu, there was a teacup of chilled asparagus soup to start, followed by a generous Auvergne chicken salad with quinoa and a seasonal fruit salad for dessert, washed down with mineral water – Vichy Célestins, naturally.

After my spa experience, Cinderella was ready for the grand ball, an event that proved so popular this year that there were two held simultaneously – one at the Opéra de Vichy and the other at the four-star Belle-Époque Aletti Palace Hotel which is opposite, with an orchestra and an opera singer moving between the two.

I was at the Opéra de Vichy, where once most of the guests had found their dining table in the ballroom, which really looked the part with its mirrored walls and mouldings, everyone stood to welcome the Emperor and Empress as they led a procession of dancers in lace-embellished evening dresses, top hats and tails into the ballroom for dinner and dancing. Everything from the gloves on their hands to the hair on their heads was in keeping with the era.

The banquet that followed was inspired by that served at imperial events in the past and consisted of a specially created ‘cocktail Napoléon’ and a couple of amuse-bouches as an apéritif, followed by a shellfish pie, a salmon fillet with a herb crust and sauce beurre rouge, veal with heritage vegetables and baked alaska for dessert – all for just €49, with wine and entertainment on tap.

You’ll find that there’s an event to attend every weekend in Vichy, as many as four between mid-May and mid-October, including the annual Salon du Chocolat (March) and Salon  de l’Automobile (November). The opera house mounts two ‘seasons’ – a packed programme of opera, ballet and classical music in the summer (June to mid-October) and theatre, dance, song and other live entertainment during the rest of the year.

Inside the Opéra de Vichy, evidence of its painstaking renovation is all around, from the mosaic flooring to the gem-embellished ceiling painted with beautiful Art Nouveau frescos. The wooden seats in the auditorium have been reupholstered, and for those who want to cuddle up while they watch a performance, I spotted a stall at the back with a sofa inside. Fortunately, there was a large archive of material for the renovators to refer to, housed within the Musée de l’Opéra de Vichy – the only museum of its kind in the region. It is not a big place, but it is full of exhibits, including musical scores, costumes and posters warning women (in small print) to avoid obscuring the view with their outsized hats. With so much material to draw upon, its selection of programmes, newspaper cuttings and costume jewellery is ever-changing.

If you do find yourself with a ticket to the opera, I’d recommend a sweet treat from local chocolatier Aux Marocains to enjoy during the performance. Owners Mr and Mme Diot introduced a very special sweet, the Alma, to coincide with the third anniversary of Jours d’Empire in Vichy. The pralines, which are coated by hand with royal icing, are made to an 1854 recipe and growing ever more popular, not unlike the festival itself.

Vichy Essentials: Planning a trip to France’s royal spa? Here’s what you need to know…

TGV from Paris in under three hours.

Serving food and drink both pre- and post- theatre/opera visits.

The walls and even the ceiling of this chocolatier are painted a rich brown and decorated with gold leaf, so it looks as good as it smells! Everywhere you look is a different kind of sweet or chocolate, in glass jars on countertops and tables, in souvenir tins and cellophane bags tied with ribbon.

A wonderful covered market selling fresh fruit and vegetables, meat and fish, as well as local cheese and wine. You’ll also find beekeepers, mattress makers and a boucherie chevaline. Open Tuesday to Sunday from 7am.

Previous Article In the Ancient Arsenals of Marseille, An Arabian Wellness Fantasy
Next Article Clisson is a corner of Tuscany in the Pays de la Loire