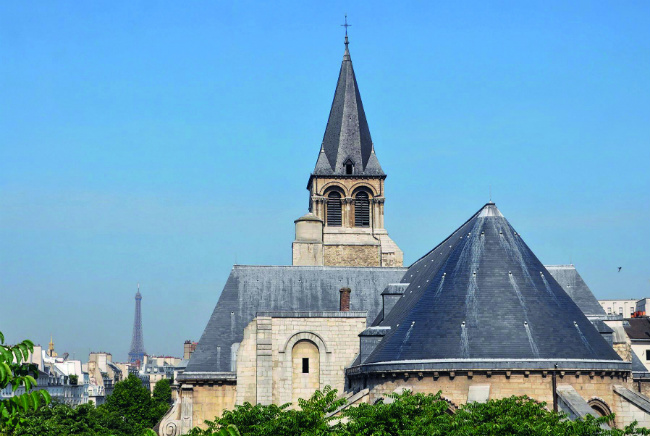 Halfway through a major five-year restoration, the Église Saint-Germain-des-Prés – the oldest church in Paris – is emerging phoenix-like from its time-worn gloom. Jennifer Ladonne investigates

No neighbourhood in Paris captures the imagination like Saint-Germain-des-Prés. In the minds of Parisians and visitors alike, it conjures a long history of sparring intellectuals and trailblazing authors and artists, whose preferred cafés and watering holes still figure prominently in the glamorous Left Bank lore. But the most enduring star in this heady constellation is the church that gave this borough in the 6th arrondissement its name. An abiding presence in the heart of the capital, the abbey has remained a steadfast symbol of Paris for visitors from all countries, faiths and walks of life. 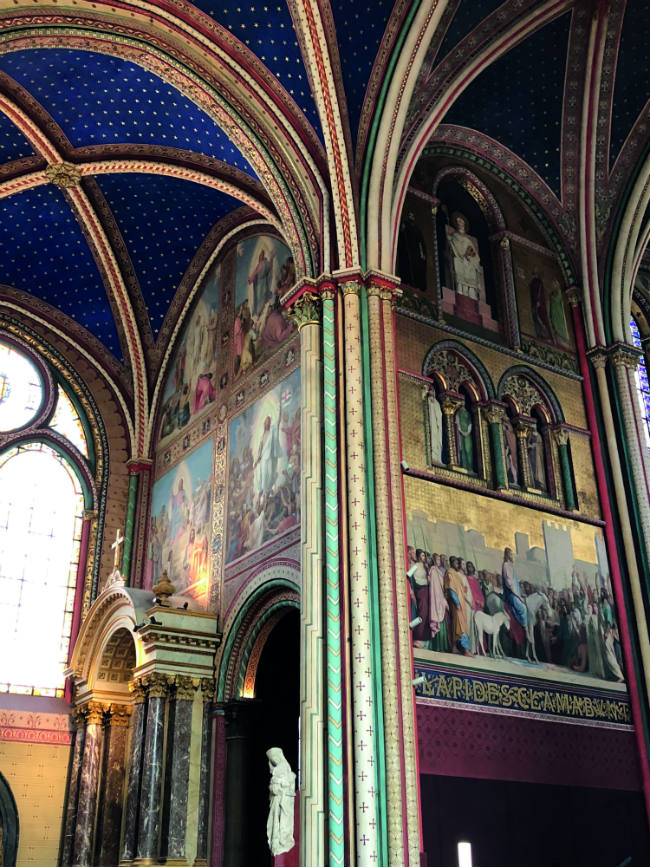 A few rebuildings and a relatively brief desacralisation aside, the Église Saint-Germain-des-Prés has presided over the neighbourhood in exactly the same spot for more than 1,450 years, since the time of the first kings of France. King Childebert, the son of Clovis I, founded the church and monastery in 543, far enough from the marshy banks of the Seine to avoid flooding but close enough to profit from the river basin’s fertile meadows (prés). First named Saint-Vincent, the edifice was founded to house holy relics and the tunic of Saint Vincent of Saragossa, Spain, and was headed by Bishop Germain d’Autun. After his death in 576, Autun was sainted and the church rededicated to Saint Germain (who was buried there, along with all the Merovingian kings, until the late 8th century, when they were reinterred at Saint-Denis, Paris’s official royal necropolis). 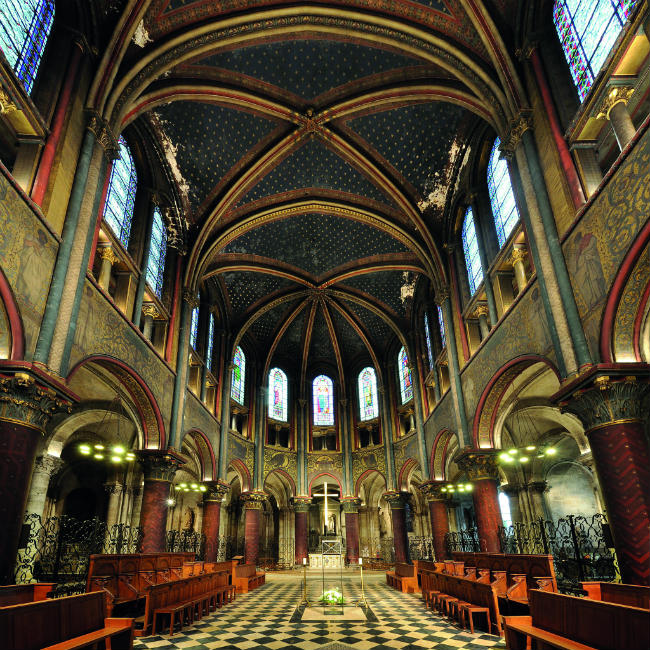 The earliest abbey was richly dressed in a style befitting its status as a major pilgrimage stop. Adorned with tall marble columns, opulent paintings, mosaic tile floors and a gilded copper-clad roof that reflected the sunlight, the abbey was also endowed with vast tracts of fertile lands along the Seine and beyond. Besides a worn cornerstone still visible just inside the stunning Saint-Symphorien chapel – to the immediate right of the church entrance – and a marker for Saint Germain’s original tomb, there are no visible remains of the original edifice, which was looted and burned by rampaging Normans towards the end of the 10th century. 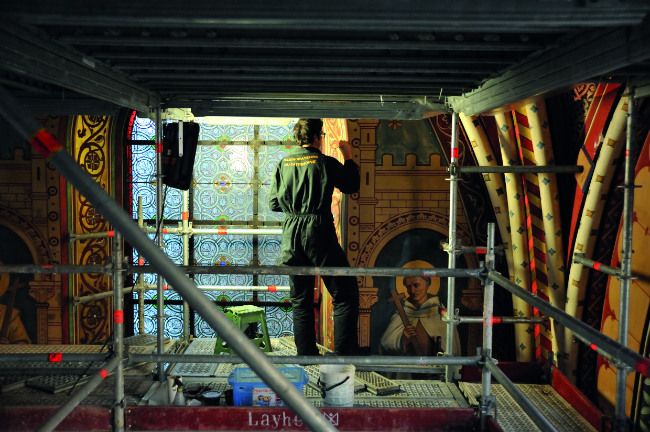 But, around the year 1000, a new basilica rose from the rubble in the newly-fashionable Romanesque style. The well-trodden entrance porch and central nave of that structure make up the oldest part of the church still standing today. By 1150, a grand remodelling project was underway, one of the very first to use the Gothic style in its arcades, three-tiered false loggias, arched windows and rounded ambulatory, all still visible today, as well as three towers (only one is still standing) and elegant flying buttresses – an innovation that predated those of Notre-Dame Cathedral, whose ground-breaking took place in 1163, almost simultaneously with the dedication of the restored Saint-Germain basilica.

By the 1630s the abbey was a major intellectual centre of France, along with the nearby Sorbonne, with which it exchanged – and squabbled over – land. Thanks to donations, purchases and a host of famous resident scholars, the abbey’s library, stocked with thousands of rare manuscripts painstakingly hand-copied over the centuries by the monks, was one of the largest and most important in France. 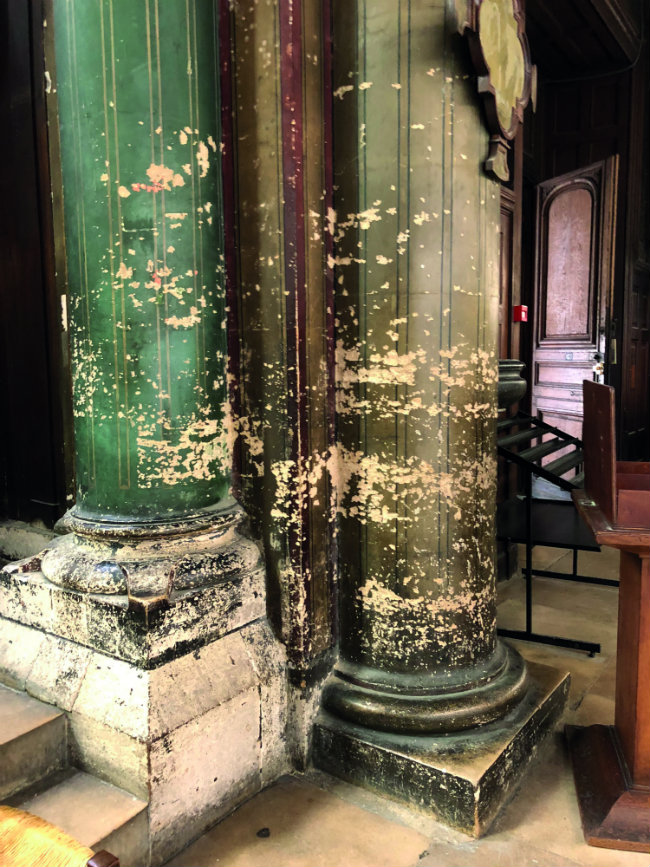 But the Revolution would dispense with all that. The monks were disbanded in 1790, and physically expelled from the monastery in 1792, all resisters executed. The church and its buildings were repurposed as a refinery for saltpetre, a major component of gunpowder. Predictably, in 1794 a fire broke out in the factory, causing a powerful explosion that destroyed almost everything but – miraculously – the basilica itself, which remained desacralised until the closure of the factory in 1802. If you linger on a bench in the abbey garden to the left of the entrance, you will sit among the few remaining fragments of the monks’ dwellings.

Though services resumed in 1803, the Revolution had taken an immense toll on the church and, despite various restorations, by the 1820s parts of the edifice were in danger of collapse. City architects (the abbey was now the property of the City of Paris) declared the church unsalvageable, while parishioners and other champions, including Victor Hugo, lobbied passionately to save it. And so, around 1840 began a major restoration – one that would last more than 30 years, spanning both the Second Empire and the Third Republic, resulting in the church we see today. 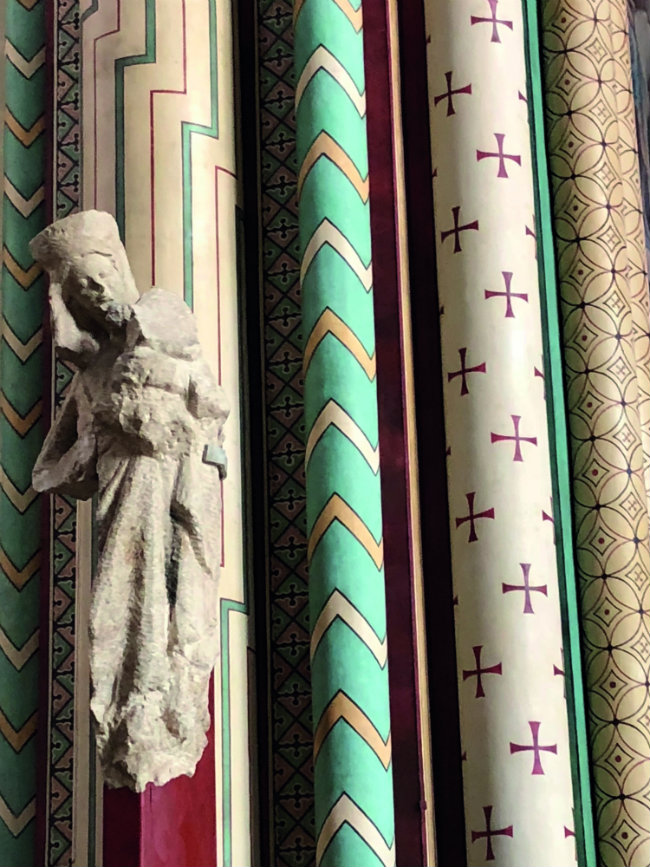 Until 2016-2017, when the restorations on the sanctuary began, visitors to the abbey received an almost paradoxical first impression: the steep, graceful uplift of its Gothic pillars and delicate vaulting in marked contrast with its dusky, vaguely brooding interiors. A dolorous effect was created by years of water damage and grime darkening the walls and arched stained glass windows – some dating back 1,000 years – and obscuring the exquisite decorative wall paintings and murals languishing from the 1840s restoration. Much of the mystique and the unique identity of the abbey are thanks to these murals, most notably the works of Hippolyte Flandrin, a celebrated student of Jean-Auguste-Dominique Ingres, who studied in Rome and was deeply influenced by Italian painting and fresco techniques. 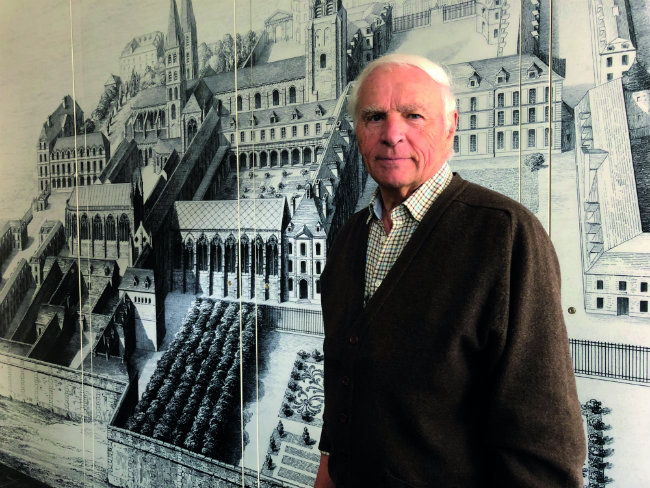 Philippe Langlois, chairman of the foundation in charge of fundraising. Photo: Jennifer Ladonne

In 1842, Flandrin was commissioned to create a monumental series of murals on historic and religious themes for the church.

“He was called ‘the new Fra Angelico’ of his time,” says Philippe Langlois, chairman of the Fonds de Dotation pour le Rayonnement de l’Église Saint-Germain-des-Prés (FDD), the French foundation in charge of fundraising.

“All the colour you see is the original paint, perfectly preserved in a layer of encaustic wax, a technique reinvented from the Renaissance.” 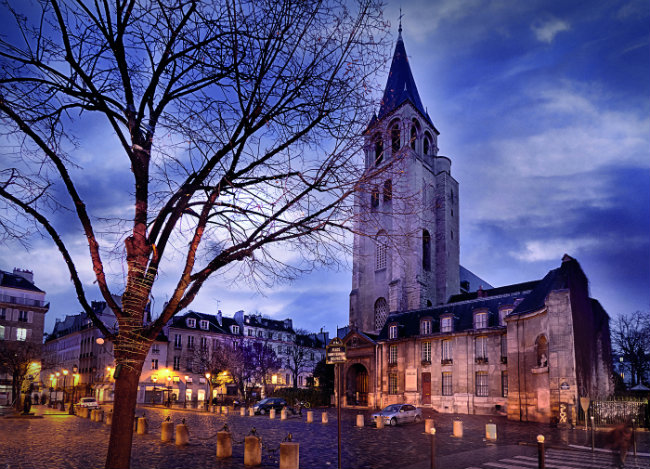 Using only a mild soap, tiny brushes, sponges and Q-tips, the gorgeous, saturated colours and gilding of the walls and pillars are being liberated section by section from their former gloom to utterly dazzling effect. But if the process is painstaking, so is the fundraising. While the City of Paris, still the owner of the walls and real estate of the church, takes much of the glory for the project, it contributes a mere 15 per cent of the funding. The rest must be raised by the church itself through appeals to private donors.

The restoration is unfolding in six well-documented phases that began in 2013 and will last until 2021, at a total cost of €5.7 million. Peanuts compared with the more than €20 million earmarked for the restoration of Chartres (now in its 10th year) and the estimated €150 million and 30 years it will take to spruce up Notre-Dame Cathedral. The FDD, in partnership with the American Friends for the Preservation of Saint-Germain-des-Prés (www.preservesaintgermain.org), has raised half of the total through several innovative initiatives, of which 100 per cent of the proceeds go directly into the preservation fund. American board member David Sheppe is passionately involved in the mission.

“We have accomplished a great deal since our campaign started,” he says. “But funding is always in short supply.” 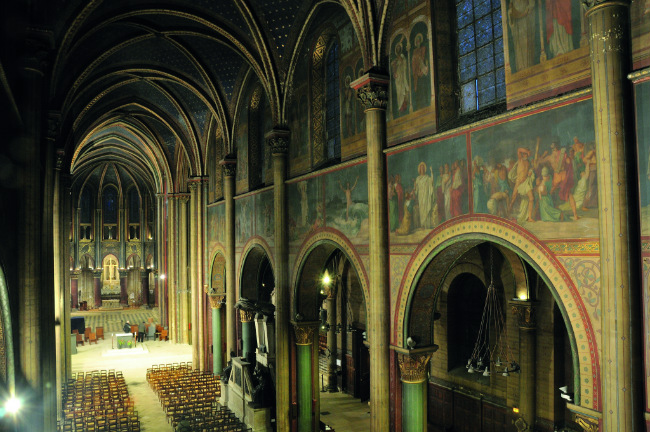 Funding may be lacking, but not good ideas or avid supporters. Last December, Christie’s Paris hosted an auction of 40 contemporary artworks by the likes of Yves Klein, Josef Albers, Damien Hirst, Claes Oldenburg and Anish Kapoor – all donated by sympathetic galleries, collectors and the artists themselves – in which three of the works fetched more than €100,000 apiece.

But there is still quite a way to go. Committed donors of means can fund their very own section of the sanctuary. But in one of the foundation’s more exciting initiatives, Adopt a Saint Germain StarTM, benefactors of more modest means can choose any one of the 3,000 newly-glimmering stars on the abbey’s splendid vaulted ceilings for a $100 donation. The star will be illuminated with the donor’s, or a loved one’s, name on the American Friends website’s interactive ceiling for all to see. Individuals from anywhere in the world, lovers of Paris and Saint-Germain may find this an excellent way to leave their own indelible mark on the neighbourhood and on Paris.

As Langlois emphasises: “This is not a Catholic foundation but an arts and cultural movement and a celebration to transmit what we have received to generations to come.” 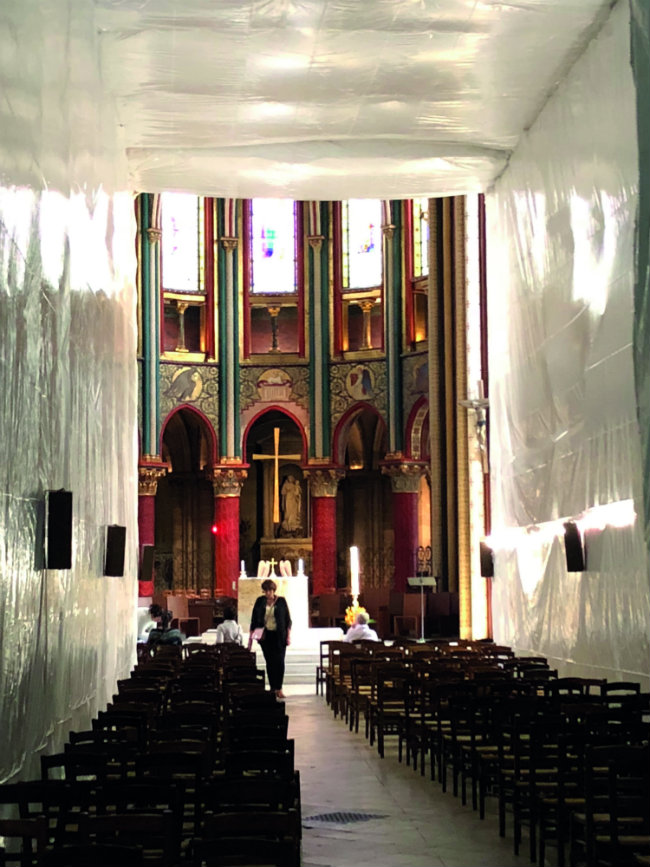 Previous Article Ryding High: A Look at French Golf as the Ryder Cup Heads to France
Next Article A Day Trip to Reims in Champagne Country