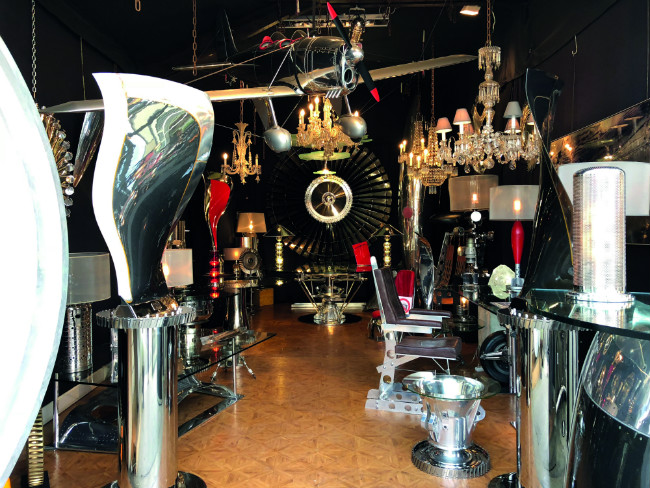 The famous flea market at the capital’s northern edge may not be the bargain hunter’s dream of yore, but antique lovers, vintage buffs and flâneurs looking for a little piece of Paris rarely leave empty-handed, writes Jennifer Ladonne

Once upon a time, the Marché aux Puces de Saint-Ouen was a must-stop for antique lovers and curious visitors looking for a memento. But on a sunny Saturday in late March a pleasantly uncrowded market testified to just how deeply eBay, the economic crisis, and competition among Paris’s neighbourhood markets and bargain fleas have eroded Saint-Ouen’s mystique. Nowadays there are fewer bargains and a starker contrast between the market’s high-end vendors and its tiny stalls brimming with bric-a-brac. Still, with 15 independent markets and more than 1,500 sellers there’s nowhere else in the world where you’ll find this concentration and variety of vintage and antiques. So if you’re willing to comb the stalls, which is what it’s all about, you can bet you’ll be amply rewarded. 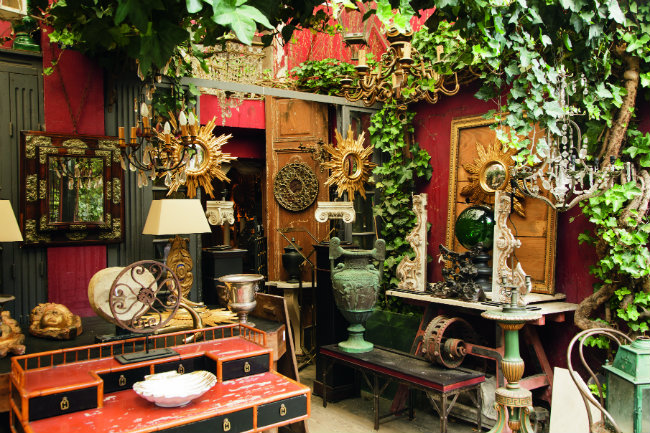 The market is a hodgepodge of everything from every period, high and low. You may just as well come away with an Art Deco crystal sconce as a stuffed crow or a signed 1950s comic book. In other words, there are treasures for every taste on every budget. For visitors with limited suitcase space, here are some highlights to look out for.

French posters are among the most popular and easily transportable goods in the market, unless they are already framed, in which case Ship Antiques (138 rue des Rosiers) is happy to send your purchase home for you. Look for old pull-down school charts, vintage Métro maps, Perrier, wine and champagne adverts and travel posters dating from the late 19th century to the 1990s. At Paul Maurel (aka Poster Paul), in the picturesque Marché Vernaison (Stand 41, Allée 1), a good selection of colourful Air France posters on linen can be had for as little as €300 to upwards of several thousand for older and rarer versions. 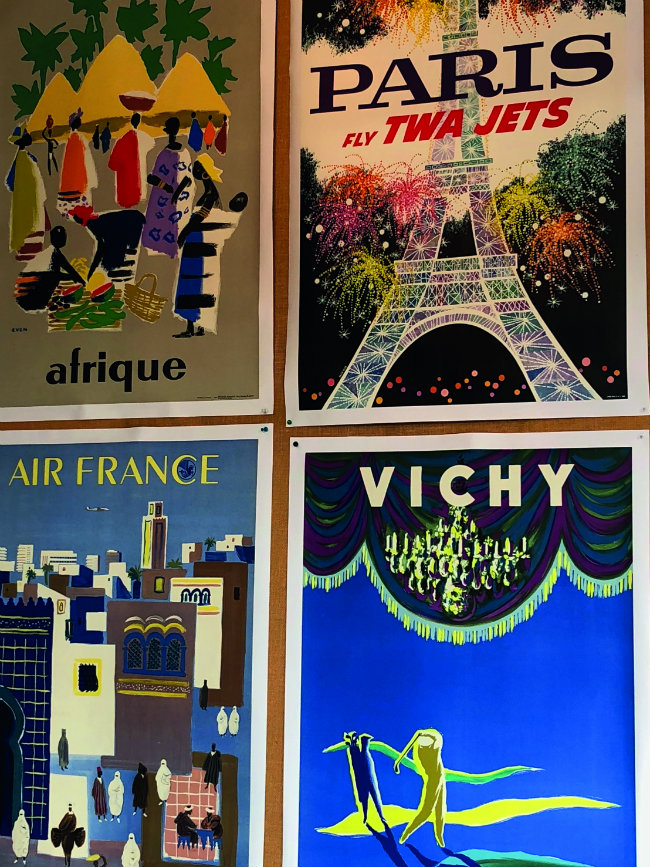 Vintage clothing buffs will find plenty here to buy or just appreciate. If you’re not so keen on the hunt, and flush with cash, head straight to Chez Sarah’s (18 rue Jules Vallès) 300-foot-long corridor of a shop flanked with a breathtaking array of designer duds dating from the turn of the 20th century to the early 2000s. Spotted were a circa-1960s gown of featherweight emerald chiffon embroidered in gold arabesques (€350), a sheer black cut-velvet jacket, and a rainbow assortment of Hermès sweaters and cardigans. But you’ll also find scores of intricately beaded flapper dresses, dozens of Chanel outfits, Pucci bikinis… The list goes on. At their other shop, just across the way, a double-row of long racks display a mind-boggling collection of lace, embroidered shawls, fabric samples from the 17th century onwards, notions, and other accessories, all cleaned, ironed and displayed in tidy plastic sleeves. 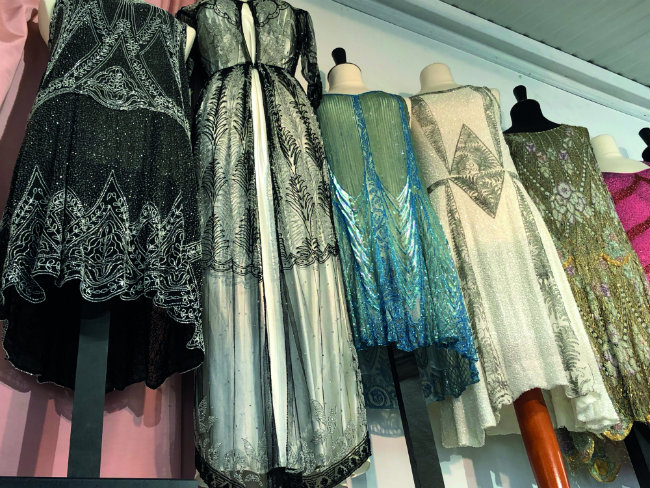 What Chez Sarah lacks in charm you’ll find in spades at Les Merveilles de Babellou’s two boutiques (10 and 14 rue Paul Bert), where artfully displayed vintage designer clothes are punctuated with spangly jewellery, bags, scarves, shoes, hats… You name it. Forget bargains, the treasures here are for well-heeled collectors, starlets and museum collections. For example, a beaded jacket attributed to Balenciaga circa 1950 costs €4,500. Upstairs, jam-packed racks organised by designer are fun to peruse, if only for the thrill of seeing Galliano silks juxtaposed with ’60s-’80s Jean Patou and Pierre Cardin originals.

The market is rife with Hermès scarves, which can be found for anywhere between €120 and €500 in the vintage boutiques, though you can sometimes get lucky at the more scruffy stalls and tables lining the rue Paul Bert between the rue des Rosiers and the rue Jules Vallès. But these are by no means the only stands of vintage clothes for men and women here; many others, at much lower price points, are scattered throughout the market. 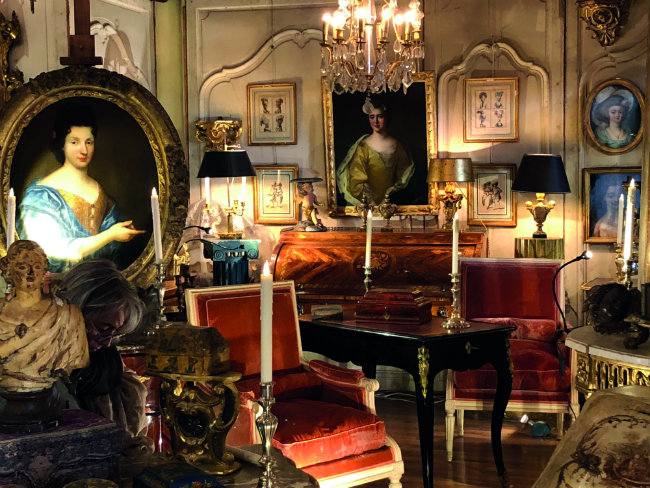 Some of Saint-Ouen’s best buys these days are in vintage glassware and silver, and these are also items that are among the easiest to transport. Virtually every stand in the market carries an irresistible teacup, silver vase, candleholder or champagne flute. A sleek, 10-inch, oblong sterling bowl in a vaguely Art Deco style set me back €25, and one dealer approaching retirement was selling his entire collection of rainbow-hued opaline glass, antique goblets and porcelain at half off.

Original paintings, drawings and prints can also prove to be great buys. You may not discover that wayward Picasso, but you will find plenty of works by minor French painters and talented amateurs. The first rule of buying art is always to look for what you like, whether it be a charming Paris scene or a miniature oil of flowers, or a seascape that’s perfect for the bedroom. Carved, gilded and inlaid picture frames can also be excellent bargains. 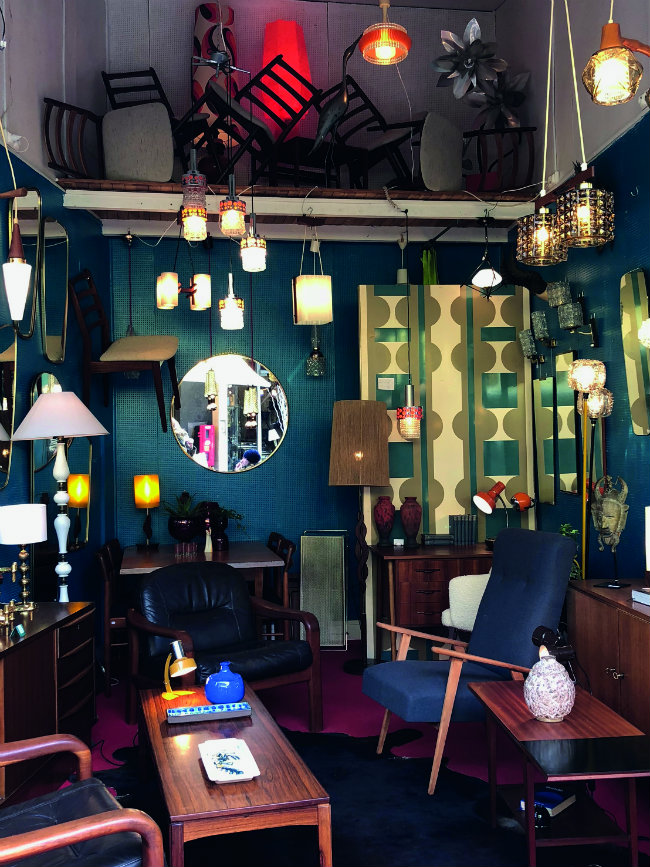 The Saint-Ouen flea market may be at its strongest at the higher end of the price scale. You will still find plenty of bargains in pieces that are either too large or too expensive to find on eBay; items that will attract a high-end international clientele.

In 2017 a branch of the venerable Paris antiques house Maison Steinitz (by appointment only), among other notable dealers, moved in to the resolutely opulent indoor stalls at the Serpette market. Here you can pick up an intricately carved and pillared 16th-century room installation to decorate your country estate, or two four-foot-tall Chinese vases to flank the entrance. This is where you’ll go for secondary Old Master paintings interspersed with elegant inlaid furniture, Aubusson tapestries, French design pieces from the likes of Perriand and Prouvé, and signed pieces from the 1920s to the ’70s. 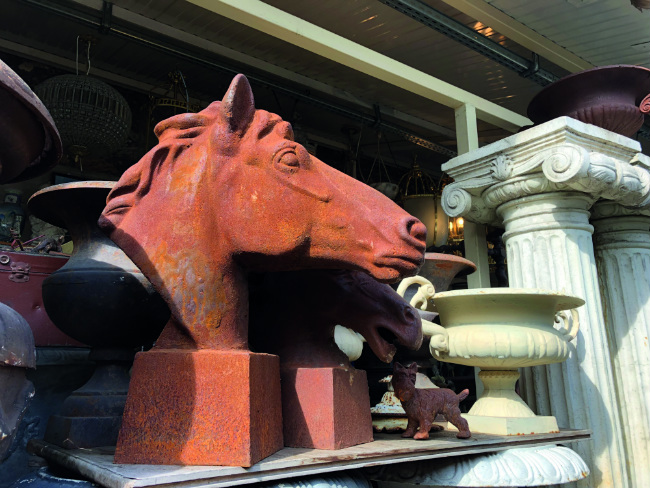 Do be aware that prices are not always marked and, even when they are, bargaining is expected. Be sure to counter with a lower offer or you’ll end up paying at least 10 per cent more than necessary. Unless you’re an expert yourself, do not take any information you’re given at face value. That intricately carved Italian Baroque mirror could just as well be a 19th-century or a 1980s imitation.

With 15 markets covering 750,000 square feet and more than 1,500 dealers, it would take several weekends to see everything at Les Puces. But seeing everything isn’t the point. Meandering from market to market, stall to stall, is the flea’s greatest pleasure.

Start at the Office de Tourisme (124 rue des Rosiers) to pick up a map and useful information. The rue des Rosiers is the market’s spine and your North Star. Notable markets include the Marché Vernaison, the first and oldest (known for its winding allées) the Marché Paul Bert-Serpette’s outdoor stalls and the area around rues Paul Bert and Jules Vallès.

We all know the early bird gets the worm, and the chic new MOB hotel’s bargain prices and convivial atmosphere assure both a good time and first dibs at the fleas. You may be tempted to stay longer – or even forego a hotel in Paris proper – to take advantage of MOB’s outdoor dining and cocktail scene, rooftop garden (whose largesse will feature in your salad), cinéma en plein air nights, and your own private terrace with a view of Sacré-Coeur. The hotel wears its green, community-oriented ethos on its sleeve, and features yoga classes, live music and monthly philosophical debates.

Even if you’re not actually staying here, the MOB is your best bet around the market for dining, with a selection of market-fresh salads and delicious pizzas. The spacious inner terrace is a big draw in warm weather. The hotel is a five-minute walk from the Paul Bert side of the market. 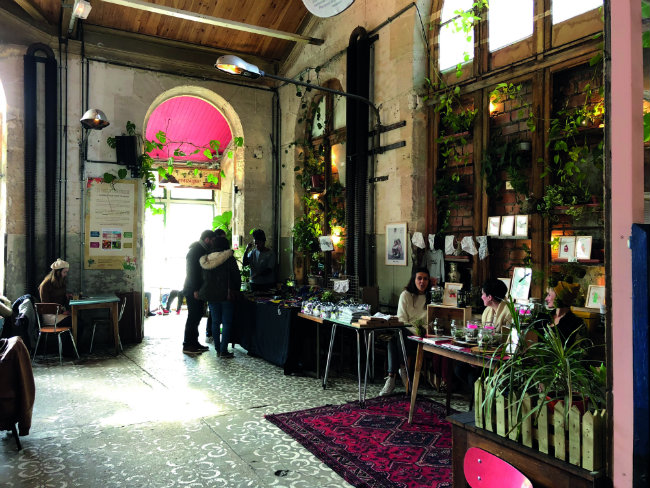 Smack dab in the centre of the market, bustling Le Voltaire bistro is an easy stop-off point and worth it for a quick meal (menu €13.50). That is, if you get there early or late. Between noon and 2pm it’s packed.

At this multifaceted eco-aware outpost, right at the entrance to the Porte de Clignancourt métro, you can eat a vegetarian brunch, shop for green housewares, sip a cocktail, have your bike fixed, or tour the Petite Ceinture park. A happening spot on weekends with DJ nights as well as its own community gardens.

Métro line 4 terminates at the Porte de Clignancourt, where signs indicate the way to Les Puces across the new Paris tramway and through a bustling bazaar rife with hawkers of fake watches, bags and gold chains. Pass under an elevated highway and you’ll end up on the rue des Rosiers.

Métro line 13 to Garibaldi. When you exit the métro station cross the avenue Kléber and pass through a large churchyard to the boulevard Edgar Quinet. Turn left a few steps and take a right onto the rue des Rosiers.

Bus 85 is a longer and more scenic route through central Paris and Montmartre directly to either the Marché aux Puces or Paul Bert stops.

Previous Article Restaurants in Champagne Country: Les Vignes, Château de Sacy
Next Article Where to Stay and Eat in Calvados