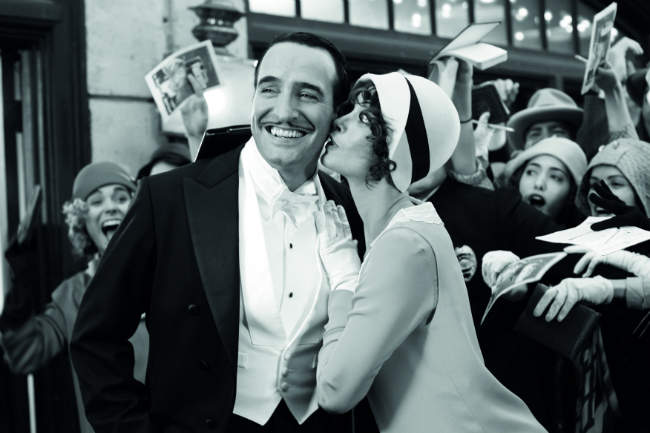 Here’s looking at the first (and only) French Oscar winner to say ‘Non, Merci!’ to the American dream

Five years ago, Jean Dujardin threw Hollywood into a tizzy. A) By becoming the first (and only) Frenchman to scoop the coveted Best Actor Oscar for his role in silent film The Artist – beating shoo-ins George Clooney and Brad Pitt to the post. B) By becoming the first (and only) Oscar-winning Frenchman to dare pass up a Stateside career – beating a quick retreat home.

“If I hadn’t won the Oscar, it wouldn’t have changed my life,” he famously said. “Anyway, everyone has seen the extent of my English. It’s just not sticking.” A fair point. Garbled anglais aside, the TV prankster turned bona fide thesp didn’t chafe at the bit to be Tinseltown’s token Frenchie (though he did give it the briefest of cracks, eventually, with stints in The Wolf of Wall Street and The Monuments Men).

After a spell performing skits in Parisian bars, Dujardin copped his first break on talent show Graines de Star larking about with comedy troupe Nous Ç Nous – whose goofy earworms were the soundtrack of the late 1990s. But it is his turn as laddish Loulou in two-hander sketch-show Un gars, une fille which truly propelled the fringe comic to overnight stardom and made him a household name. The silver screen soon beckoned and he totted up a string of comic-relief parts, before sealing his status as the nation’s favourite buffoon in cult caper Brice de Nice, as the titular (and oh-so obnoxious) man-child, and spy spoof franchise OSS 117 directed by Michel Hazanavicius – who went on to cast him as his Lindy-hopping hero, George Valentin, in The Artist.

Though he is now but a footnote in the annals of Hollywood, at home, the mere whisper of his name, and flash of that irresistible Cheshire-cat grin, spell out box-office hit. Ironically, while his shelves heave from the weight of international awards – with a Golden Globe and BAFTA to boot – the homegrown César still evades him…

Early career: After performing sketches in bars and cabarets in Paris, he joined forces with comedy troupe Nous Ç Nous. In 1996, he got his first taste of TV fame on talent show Graines de Star.

I know the face… He starred in five-time Oscar-winning The Artist as silent Hollywood idol George Valentin, whose career is lost with the advent of the talkies. He also made a fleeting appearance in The Wolf of Wall Street as a smarmy Swiss banker and was among George Clooney’s motley platoon in WWII epic The Monuments Men.

Where will we see him next? He is currently filming period comedy-drama, Le Retour du Héros, in which he plays Capitaine Neuville, a roguish hussar called to the front, leaving his future bride heartbroken.

C’est pas vrai! The post-Oscars euphoria fizzled out fast as he had to contend with six months of death threats and abuse. On a lighter note, he can rattle off Baudelaire on cue.

Previous Article Where to Stay and Eat in the Rhône-Alpes
Next Article A Poetic World in Gascony: Chef and Culinary Innovator Michel Guérard