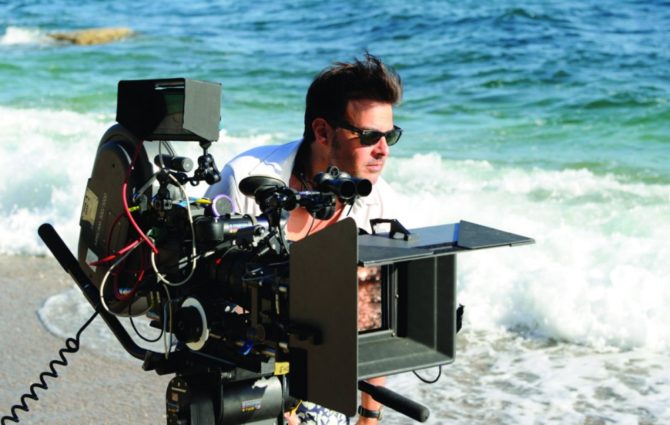 Louis Lumière could hardly have anticipated how wrong his declaration that “The cinema has no future” would turn out to be, especially when it comes to Cannes. In 1895, Louis and his brother Auguste first showed their pioneering moving pictures just down the coast from Cannes, in La Ciotat, a small sleepy fisherman’s village near Marseille so, understandably, it was definitely hard for them to imagine the Riviera would become home to the biggest and most glitzy cinema festival in the world.

Having covered the Festival de Cannes for nearly two decades, I’m always astonished at how quickly the town takes on its gaudy second identity. From the giant movie posters tacked onto its Belle Époque palaces to the seemingly endless series of shiny Ferraris and Lamborghinis pulling up in front of the Carlton Intercontinental hotel, the teeming town exudes a  palpable, noisy energy that is intoxicating, contagious and after the 12 days of the festival, utterly exhausting. Even un-accredited visitors can discover groundbreaking films at the Quinzaine des Réalisteurs (Fortnight of Directors), which is held at the Palais Stéphanie, and the seafront cafés provide ringside seats for an endless fashion parade that ranges from elegant to outrageous.

Most people assume that the yearly Cannes Festival is a showy spree of celebrity-driven glamour, but there’s more to it than Champagne-soaked soirées on yachts and all-night private parties on the beach, all of which are reserved for cigar-chomping movie moguls and privileged film industry folks. Believe it or not, some of the best moments in Cannes are the unexpected ones, when you feel ‘the shock of the new’.

It’s a balmy night and you’re sitting in a star-packed audience, minutes before the world premiere of Un Certain Regard (A Particular Outlook), a film which isn’t even competing. Still, the excitement is electric. A few rows down, cinematic icon Catherine Deneuve and her daughter, Chiara Mastroianni, are chatting away with French actor Vincent Lindon. Over to the left, you spot French actress Béatrice Dalle and a disparate trio of directors: Leos Carax, Costa-Gavras and Jane Campion. In the right corner sits French actor and Cannes Festival jury member, Daniel Auteuil. Veteran filmmaker Agnès Varda has also come to show her support.

Tonight, there’s no red carpet, fabulously flimsy gowns or elaborately coiffed hairdos, only a common passion, grounded on the shared experience of sitting in a dark room and being there to applaud the cast and director as the final credits roll.

In a renewal of the Riviera’s cinematic past, an increasing number of major filmmakers have chosen to shoot on the palm-fringed stretch between Menton and Cannes, and the woody backcountry of Vence and Grasse. For example, this summer, French director André Techiné shot his latest film, L’Homme que l’on Aimait Trop, starring Catherine Deneuve and Guillaume Canet, based upon the true story of the kidnapping and murder of casino heiress, Agnès Roux. In July, Woody Allen prowled incognito around Vieux Nice and finally set up camp to film his still-untitled movie starring Emma Stone and Colin Firth, stirring up considerable excitement amongst the locals, who turned up in droves for the cast call for extras.

Allen’s film, set in the 1920s and 1930s, coincides with the era of the glory days of Nice’s historic Victorine Studios – France’s little Hollywood – which was launched by flamboyant American director Rex Ingram in 1925. Once the best-equipped studio in Europe, silent movie idol heartthrob Rudolf Valentino launched his career here with The Four Horsemen of the Apocalypse and a horde of the biggest cinematic legends – including Alfred Hitchcock, François Truffaut, Roger Vadim, Jeanne Moreau, Simone Signoret, Yves Montand, Cary Grant, Grace Kelly, Elizabeth Taylor, Richard Burton and Sophia Loren – have passed through the white gates of the seven-hectare lot, which is now named Riviera Studios.

Now that the festival stardust has settled, critics have been unanimous in the opinion that this has been a triumphant year for French cinema. Here’s a partial run-down of this year’s grand cru:

“One of the main themes of the film is destiny,” said the soft-spoken Kechiche. “How do you account for the fact that one day, you meet someone who is able to radically change your life, due to a chance encounter? Another subject is how love evolves and the break up, which is like a form of bereavement that can last one year, 10 years, or a lifetime.”

Another highly praised film was Le Passé (The Past) by Academy Award-winning Iranian filmmaker Asghar Farhadi (A Separation, 2011). The director’s first French language film is a multi-layered family drama set on the outskirts of Paris. Starring Bérénice Bejo (The Artist), Tahar Rahim (A Prophet) and Iranian actor-director Ali Mossafa, it tells the story of a woman and mother who’s torn between two men – her ex-husband and live-in boyfriend. Béjo’s stunningly subtle performance landed her the Best Actress award.

“I worked like crazy,” the actress said, of the gruelling five-month shoot. “It was more about how Asghar helped us get into the character during the long preparation before we started to film.”

“I asked the actors to do a couple of months of rehearsals before the shoot,” the director added. “If an outsider had walked in, he would have thought we were doing a play.”

Meanwhile, there was also much praise for François Ozon’s latest film, Jeune et Jolie (Young and Beautiful), an arresting and probingly elegant portrait of a teenage girl who discovers the power of her sexuality. This superior coming-of-age tale features emerging young star and French model, Marine Vacth.

The Cannes reviews were decidedly divided regarding Jimmy P, French director Arnaud Desplechin’s latest drama, which was shot in English and based on a true story. Jimmy Picard, convincingly played by Academy Award-winner Benicio Del Toro (Traffic, 21 Grams), is a Native American who returns from World War II with an illness that is erroneously diagnosed as schizophrenia. But once Freudian ethno-psychoanalyst Georges Devereux (Mathieu Almaric) takes him on as a patient, Jimmy’s complex past unravels the secret of his malady.

“I read a lot of books about psychoanalysis,” said Desplechin, “but when I happened to read the book on which it was based, I thought, ‘wow’ – it has got Indians, my childhood fascination, and I love dialogues. In the film, each word matters. You don’t know what is hidden behind the word.”

Two uncompromisingly powerful dramas by French female directors, both featuring all-star homegrown casts, were among the non-competing films in this year’s Festival de Cannes, alongside the aforementioned Un Certain Regard.

Claire Denis’s Les Salauds (The Bastards), which the director co-scripted, relates the story of a sea captain who’s called back to Paris to deal with the mysterious suicide of his sister’s husband. He then becomes entangled in the life of his troubled niece – the drama features admirable performances by Chiara Mastroianni and Vincent Lindon as the ill-fated lovers.

But perhaps this year’s most warmly praised outing was Rebecca Zlotowski’s beautifully crafted social drama, Grand Central, the 33-year-old’s sophomore feature, following 2010’s Belle Épine. It stars the festival’s newly-found darling, Léa Seydoux, and also features a moving performance by Tahar Rahim, another actor with more than one Cannes appearance this year, in his case Le Passé. The story concerns a young drifter named Gary (Rahim) who, after a series of odd jobs, is trained to work at a nuclear power plant, where he runs the risk of high level radiation exposure and also falls dangerously in love with his boss’s young wife, Karole (Seydoux).

“After months of playing an intellectual lesbian painter in La Vie d’Adèle Chapitre, I was thrilled to play a very feminine, sexy character,” says Seydoux, who arrived for our interview barely made-up, wearing a simple navy blue dress. Her incandescent portrayal of a flirtatious, married woman also demonstrates the actress’ extreme versatility.

“I love playing bad-ass characters in blockbusters,” she says, referring to her role as a treacherous, gun-slinging villain in Mission: Impossible – Ghost Protocol, “but I also loved the experience of working with a female director like Rebecca, who had a completely different way of exploring sensuality.”

Stepping back from the shared emotions of this year’s biggest hits, French cinema still seems concerned with the ever-thorny complexities of the heart (“Bleu, bleu, l’amour est bleu”, as the song goes) rather than big-budget epics.

However, if this year’s homegrown features are compared with 2012’s wrenching Palme d’Or winner, Amour by Austrian director Michael Haneke, there may indeed be something new under the Riviera sun. This year, the ubiquitous theme of love has shifted perspectives – from Amour’s elderly Parisian couple, memorably played by Emmanuelle Riva and Jean-Louis Trintignant, to the seethingly passionate teenage romance depicted in La Vie d’Adèle Chapitre 1&2, co-starring the extremely promising 20-year-old Adèle Exarchopoulos, who stole the hearts of Cannes’ audiences.

Cannes City Essentials: Plan your visit to this jewel of the Riviera with our insider’s checklist.

Behind the glitzy seafront Croisette and Belle Époque palaces, Cannes’ back streets are full of charming hotels and affordable bistros and wine bars, patronised by the locals.

This family-run bistro dates from 1935. Expect a convivial ‘down home’ atmosphere and reliably good Provençal fare, made with ingredients from the neighbouring Forville market. 80 Rue Meynadier; no phone and cash only.

Hop on a ferry to Ile Saint- Honorat in the Lérins Islands, where a 14th Century monastery produces award- winning wines and liqueurs. Many are served at this brasserie, to accompany tasty seafood and cocktails.

A sprawling wine bar in Le Suquet with a terrific choice of little-known, prizewinning vintages, plus live music on weekends. 10 Rue des Halles; +33 4 93 68 10 20

Behind the Croisette lies this chic, 34-room, hotel in a 19th Century mansion, offering plush suites with kitchens and an intimate atmosphere. 64 Boulevard d’Alsace

A 35-room oasis in a pretty Mediterranean villa, surrounded by lush gardens, with an outdoor pool, dining terrace, hammam and mini-spa. 120 Rue d’Antibes

New York-born Lanie Goodman is a writer and educator who’s based in the South of France. Her work has appeared in The New York Times and Condé Nast Traveler.