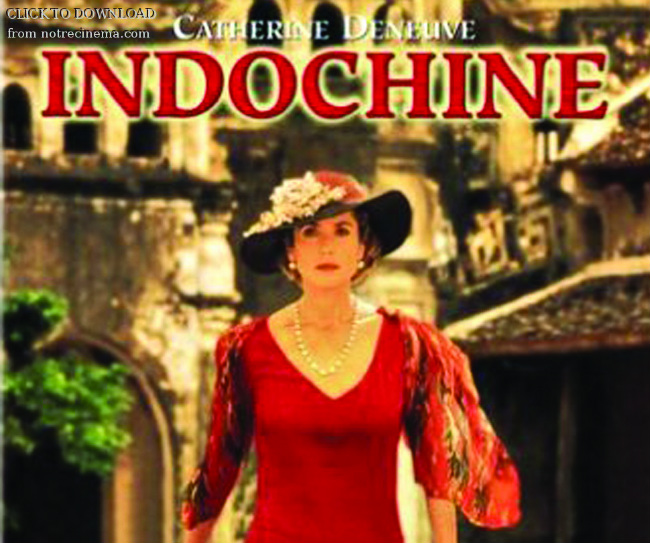 LOVE IN THE AFTERNOON

If a ‘belle de nuit’ is a lady of the night, then you can guess what a ‘Belle de Jour’ gets up to in the afternoon. Such is the premise for Buñuel’s 1967 darkly sexual, surrealist classic starring Deneuve as a beautiful young housewife in a sexless marriage to a young doctor whose unfulfilled sexual fantasies lead her to working from 2-5pm each day in a high-class Parisian brothel.

It’s not in the explicit representation of sexual desire that the film makes its mark, but rather in its depiction of the power of imagination – evoked so coolly in Deneuve’s compelling performance. Buñuel cuts between her enigmatic smile and what’s really on her mind as she embraces masochism and eventually falls for a no-good gangster.

The film has proven to be an enduring and influential one (it features on many ‘greatest films of all time’ lists), with the likes of Martin Scorsese proclaiming its stylistic and directorial brilliance for a 2002 DVD re-release and Portuguese auteur Manoel de Oliveira helming 2006’s Belle Toujours, an imagined update on two of the central characters. 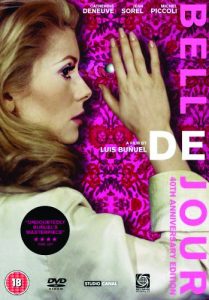 The final throes of a colonial regime, doomed romance and an exceptionally immersive sense of time and place (with stunning photography) make this epoch-spanning period drama perfect viewing for a quiet Sunday evening in front of the fire.

Deneuve is in imperious form here, dominating screen time as Éliane – an elegant rubber plantation owner in Vietnam – over the course some 25 years. Despite her classy persona, she’s not averse to the occasional puff of opium or carnal interludes with a handsome young naval officer played by Vincent Pérez. The film wanders in parts, and the metaphor of Éliane’s troubles mirroring those of the French ruling classes is none too subtle, but Deneuve lifts it all with her beguiling work.

Deneuve, 50 by this stage in her career, was nominated for Best Actor at the 1993 Oscars (her only nomination to date), and went one better at that year’s Césars. 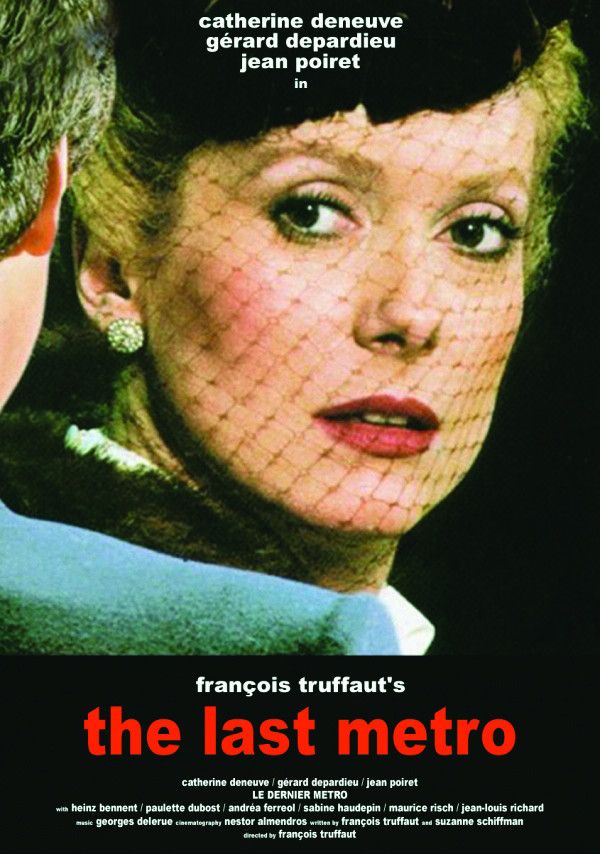 Catherine Deneuve in “The Last Metro”

Filmmaker François Truffaut had long wanted to pay homage to his uncle and grandfather, who had been members of the Resistance during the War. So in this period melodrama we find Deneuve as an actress and wife of a Jewish theatre owner as Paris struggles to keep morale up with a little culture under Nazi occupation. Most of the film is set backstage at the dilapidated theatre as a new production is rehearsed, and despite the sense that Truffaut wants us to believe that a play not going ahead is more important than the threat posed by the Nazis, it’s a decent film. As for Deneuve, her depiction of romantic inscrutability (does she love the new leading man?) is, as ever, nonpareil. 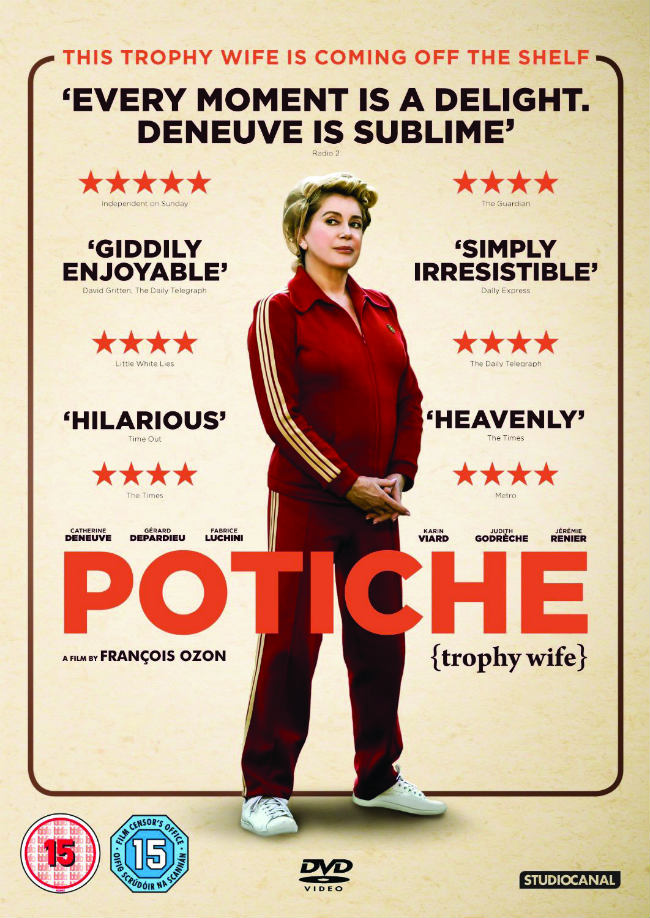 There are some big, big players in this hugely entertaining Franco-Belgium ensemble romp that expertly recreates France in 1977. Among those sharing the billing with Deneuve are French movie heavyweights Gérard Depardieu, Fabrice Luchini, Karin Viard, Judith Godrèche and Jérémie Renier. And yet, who leaves the biggest impression, with her turn as the bourgeois wife of a tyrannical umbrella factory owner whom we first see in a red running suit? Deneuve of course. With poise and stillness as chaos evolves all around (the factory employees are revolting), her portrayal of Suzanne Pujol embarking on a political career is a joy to watch.

Amongst the exquisitely delivered farce set-ups and wordplays, Potiche has a theatrical feel because François Ozon, who also directed Deneuve in the fabulous pastiche from his 2002 film 8 Women, used a 1980 stage play as his template.

From the umbrella factory in Potiche, we knowingly step back to the beginning, to the musical that brought Deneuve to prominence and kick-started one of the most enduring acting careers France has ever witnessed. Jacques Demy’s full colour spectacular, in which all dialogue is sung, was a huge success in France (the continuous musical score was also a smash, giving its composer Michel Legrand a leg-up to a Hollywood career that would garner three Oscars).

Deneuve is brilliant as a young woman left pregnant by a mechanic who leaves for the Algerian War, who ends up with a wealthy jeweller. The film was the middle offering in Demy’s seaside trilogy (Lola preceded it in 1960 while Les Desmoiselles de Rochefort followed in 1967). It was nominated for the Best Foreign Language Film Oscar in 1965. 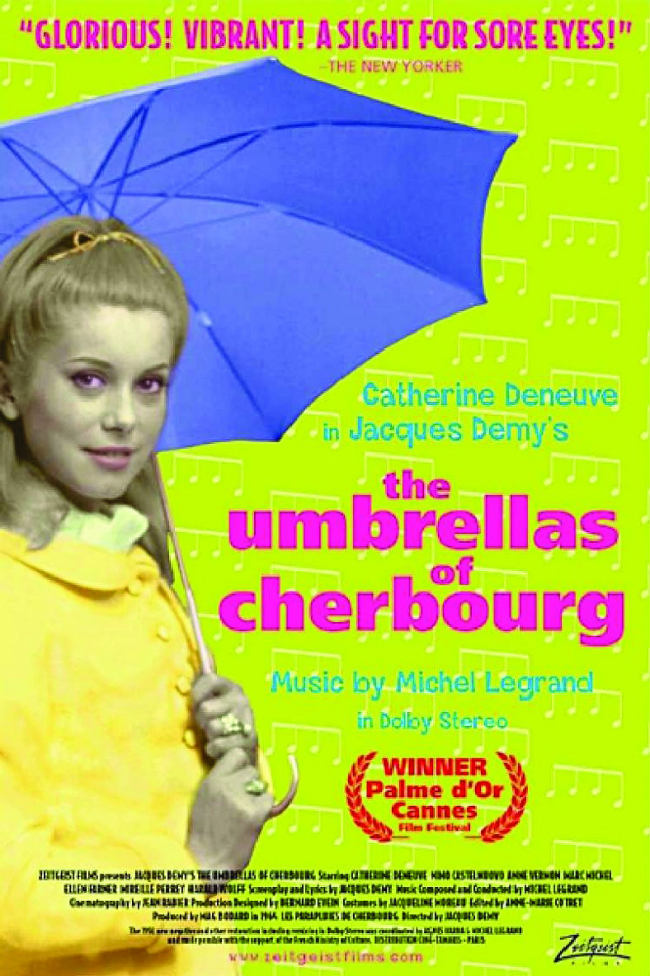 Catherine Deneuve in “The Umbrellas of Cherbourg”

Previous Article La Chartreuse du Bignac: Where to Stay Near Bergerac
Next Article Boutique Beat: Shopping for Jewellery in Paris