Club Med: The Story Behind the Iconic French Brand 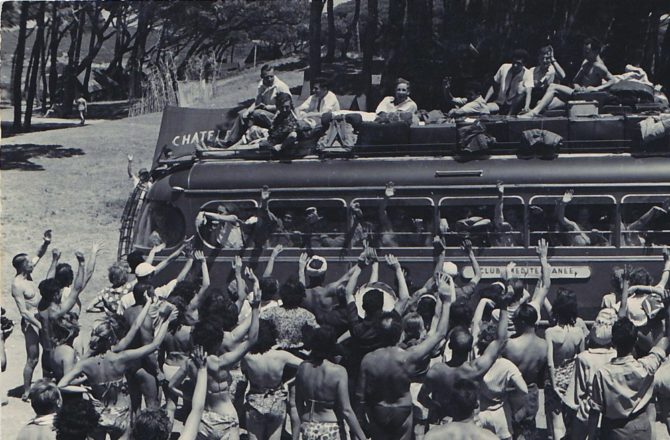 The very first ‘all-inclusive’ holiday didn’t include running water, electricity or private rooms. Guests slept in tents on the beach, played sports together in the fresh air, shared food under the pine trees and sang songs around the campfire in the moonlight. It was 1950 when Gérard Blitz dreamed of creating a utopian bubble, where different nationalities could come together and forget the recent divisions of war.

A water-polo champion, Blitz based his idea of Eden on the wholesome, community atmosphere of an Olympic village. He got together with a tent maker, Gilbert Trigano, and set up Club Mediterranée as a not-for-profit organisation, based on a simple, irresistible philosophy: “The aim in life is to be happy. The place to be happy is here. And the time to be happy is now.”

The launch of what would come to be known around the globe as Club Med couldn’t have been better timed. Rationing had just been lifted in France and the thirst for simple pleasures and social harmony was intense.

During that first summer, Club Med had to refuse 10,000 requests to stay at their camp in the Balearics. Over the following years, Club Med ‘villages’ were set up across the Mediterranean, the tents replaced by beach huts and the first ski resort opened in Switzerland. Club Med culture began to take shape, with its very own language, rituals, and currency.

Villages were, and still are, presided over by charismatic hosts known as Chefs de Village (Village Chiefs). There were no clocks, no locks on doors, no televisions, no cars and above all  there was no money. Guests, or Gentils Membres (GMs), were given strings of beads to use in exchange for drinks at the bar. At the time, the press found this idea revolutionary – in 1965 Paris Match exclaimed, “In these villages, money has no value. We are all billionaires! We live in a perfectly socialist economy, where everything is free for everyone”.

The tanned and smiling Club Med staff, the Gentils Organisateurs (GOs), lived alongside the GMs, sharing the gigantic buffets, involving everyone in the sports and games, and providing the evening entertainment. The Club Med dance, Les Crazy Signs, had entire villages throwing their hands up in unison. Talented young singers, comedians and acrobats were drawn to the opportunity of cutting their teeth on the ever-expanding Club Med’s stages. Musician and actor Patrick Bruel, TV comedian Vincent Lagaf and impressionist Nicolas Canteloup are among the well-loved French celebrities who began their careers as GOs.

These wholesome beginnings took on a more hedonist vibe as social mores evolved during the 1960s and 1970s. The friendly atmosphere, free-flowing cocktails and sultry summer evenings made holiday romance easy to find, and Club Med began attracting hordes of singles in search of a good time. In 1978, Serge Gainsbourg hammed up his husky delivery on the song Sea, Sex and Sun, recorded for the soundtrack to director Patrice Leconte’s racy big screen parody of Club Med, Les Bronzés.

The film featured the cast from comedy troupe Le Splendid, led by a young Thierry L’Hermitte, clad in flower garlands and tiny Speedos. The troupe played oversexed GOs and swinging GMs, throwing themselves into communal dances and saucy entertainment. Les Bronzés became the cult film for a whole French generation and Club Med tried to shake off all associations with it for years after its release.

By the 1980s, Club Med’s all-inclusive model was firmly established but copycat resorts were springing up across the world and Gérard Blitz’s vision was losing its singularity. An increasing awareness of the social and environmental impact of this insular concept of tourism was also beginning to tarnish its image.

When the era of low-cost travel arrived in the 1990s, Club Med tried to compete by opening its own budget resorts and diversifying into gyms, bars and restaurants. But this watered down the brand’s core values even more. Hundreds of millions of euros were being lost year-on-year, and by the time 9/11 brought the global tourism industry to a standstill, it was difficult to imagine how Club Med would ever recover.

To the rescue came Henri Giscard d’Estaing, son of the former French President. As CEO he began Club Med’s radical and definitive shift up-market. The lower-end resorts had been a financial black hole so, one-by-one, he shut them down and wound up the gyms and restaurants. The new CEO then gradually started to invest one billion euros upgrading and constructing high-spec Club Med villages of ‘4 and 5 Trident’ quality, with the aim of attracting wealthy families from all over the world.

The response from loyal GMs was hysterical. Petitions were signed to ‘give us back our Club’ and university theses were written about the avalanche of reactions to the re-branding. “Club Med had become a national icon, like the French football team” wrote Jean-Jacques Manceau in his 2010 book, Club Med: Réinventer la Machine à Rêves.

Nostalgic GMs declared that the soul of ‘Le Club’ would be lost, its traditions would disappear, and that they’d no longer be able to share rosy childhood memories with their own families. After all, how could communal dancing, tables of eight and ‘all you can eat’ buffets become chic or exclusive?

They needn’t have worried. If any nationality could make it happen, the French could. In the new Club Med resorts, the buffet experience is more like helping yourself from the kitchens of a top French restaurant. Chefs in immaculate whites sear sizzling slabs of foie gras in front of you, butchers sharpen knives to serve perfect slices of  tender boeuf en croûte, and pâtissiers prepare delicate plates of tartelettes for you to select at your leisure. The cuisine is adapted to the local area, but a French touch always remains. In the new Club Med village at Guilin in China, a noodle bar is essential, but an on-site boulanger still takes care of the essential supply of croissants.

Sharing tables of eight also remains an institution. Good-looking, multilingual GOs join GMs for dinner, and create a celebratory atmosphere where easy conversation with strangers becomes the social norm. The customer reviews on Tripadvisor read like gushing lists of names from an Academy Award acceptance speech, and even cynical first-timers get into the spirit.

“The reason people become infatuated with Club Med,” says Jean-Baptise Bacheron, the founder of Club Med fan website, macase.net, “is the sense of belonging. Everyone is welcomed like one of the family, and you share the experience with people from all over the world.”

This feeling of goodwill and affection towards the GOs is how the now resolutely high-end Club Med gets away with the more amateurish aspects of its holiday entertainment. Seeing the barista who brought your morning coffee burst into song on the stage has the surprise element of a TV talent show, and GMs end up applauding like parents at a school play.

Their own children have fewer inhibitions to overcome, and the Crazy Signs dances, initiated by the GOs several times each day, are a magnet for the under-13s. Providing exceptional activities for the youngest GMs was an essential prong of the re-branding strategy. Babies as young as four months old are provided with globally acclaimed French-style childcare at Club Med. Older kids can go to circus school with their new-found international friends, or have professional skiing tuition while their parents whizz down the black runs or drift off in the spa.

“It’s a holiday for everyone,” says Bacheron. “Teens can go clubbing without getting into trouble. GOs are always around to keep an eye on them, and the villages are usually a few kilometres away from the nearest town.”

The isolated locations of the resorts, often in areas with little infrastructure, has obliged Club Med to figure out ways to produce its own energy and clean water. In 1978, a giant field of solar panels was constructed at a Club Med village in Martinique, while at Rio Das Pedras in Brazil, electricity is supplied by hydro power, and the cruise ship ‘Club Med 2’ reduces emissions using seven giant computer-operated sails. A dedicated Sustainable Development Department was opened as part of Club Med’s luxury overhaul and closing the low-end resorts has enabled the brand to keep standards consistently high. Almost 75 per cent of the jobs created are filled by local people, with some 95 per cent of goods sourced from suppliers in the host country, including fresh produce from nearby family farms, and eight Club Med resorts boast independent eco-certification.

Having allayed the fears of loyal French GMs, the high-end Club Med is reaching out to the emerging countries, with the aim of making China their second most important market after France. Along with France’s Axa Private Equity, Chinese conglomerate Fosun are in the midst of negotiating a takeover bid of the brand, and three more villages are due to be opened in China by 2015.

Ten years have gone by since Giscard d’Estaing began his ambitious and ultimately successful makeover of one of France’s most well-loved brands. In the latest French TV advert, Club Med is finally able to poke fun at its colourful past. Ballet dancers in a sumptuous theatre pause gracefully before launching into a minutely choreographed classical version of the Les Crazy Signs routine from Les Bronzés. The advert then cuts to a close-up of Thierry L’Hermitte in the audience – who has been going to Club Med regularly for the last 30 years – and he exclaims, “It’s funny, that’s not at all how I’d remembered it. Bravo!”

British jounalist and translator Pauline Harris has lived and worked in every corner of France. Her writing has appeared in The Financial Times, Le Courrier International, Monocle and many other publications.