From Fashion to Movies: Erté & the History of Art Deco in Paris 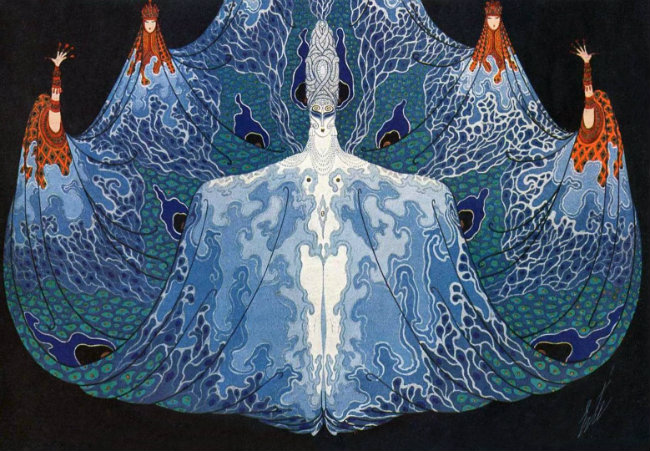 The world’s first Art Déco building was the Théâtre des Champs-Élysées built in Paris prior to the First World War. Between the two wars, the style was popularized by designers and artists who used its visual drama in theatre and movie sets and costumes, fashion design and graphic art that even today graces public murals and hangs on living room walls.

One of the pioneering designers who worked in fashion, illustration, movies and theatre was Erté, sometimes referred to as the Father of Art Déco. His first job in 1912 was working with Paul Poiret, the era’s King of Paris Couture. Poiret assigned Erté to design costumes for a play, and one of the performers was Mata Hari of WWI spy fame. Erté went on to illustrate many Harper’s Bazaar covers and influence fashion. He is famous for his flamboyant theatre and Hollywood movie set and costume designs. He also kept Art Déco popular in the late 1960s through the 1980s with his graphic illustrations, sculpture and figurines. 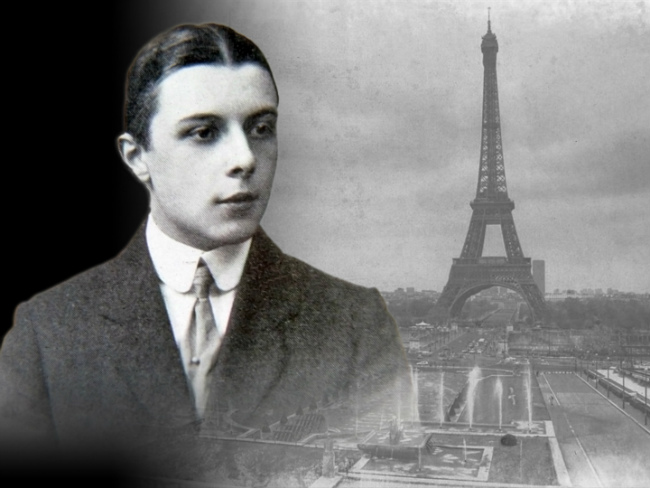 “Art Déco was a cultural revolution for its time, akin to the influence Star Wars has had on today’s culture,” said Stephan, Artist-in-Residence for the Art Déco Society of California. “Everything changed (with a) huge influence on fashion, music, design, art and style.”

Stephan, an expert on Erté, will give a presentation on the artist at the Paris Art Déco Society (APADS) in Paris on June 23 at the Ecole des Beaux-Arts. The event will run from June 22 – 27 and include representatives of the Art Déco Societies from New York, Chicago, Los Angeles and Melbourne. This members-only gathering features a weeklong-guided tour of both famous and hidden Art Déco houses, hotels, museums and government buildings. The days will end casually in Art Déco brasseries, restaurants and bars.

With Art Déco’s start in Paris, the visual arts design style began flourishing throughout the world in the 1920s through the 1940s. The name was coined from the Exposition Internationale des Arts Décoratifs et Industriels Modernes held in Paris in 1925. The shortcut was Arts Décoratifs, or Art Déco. Buildings with this style are found throughout the world, from the former Cadillac building in Cairo, to the Bacardi building in Havana, to the Golden Gate Bridge in San Francisco. 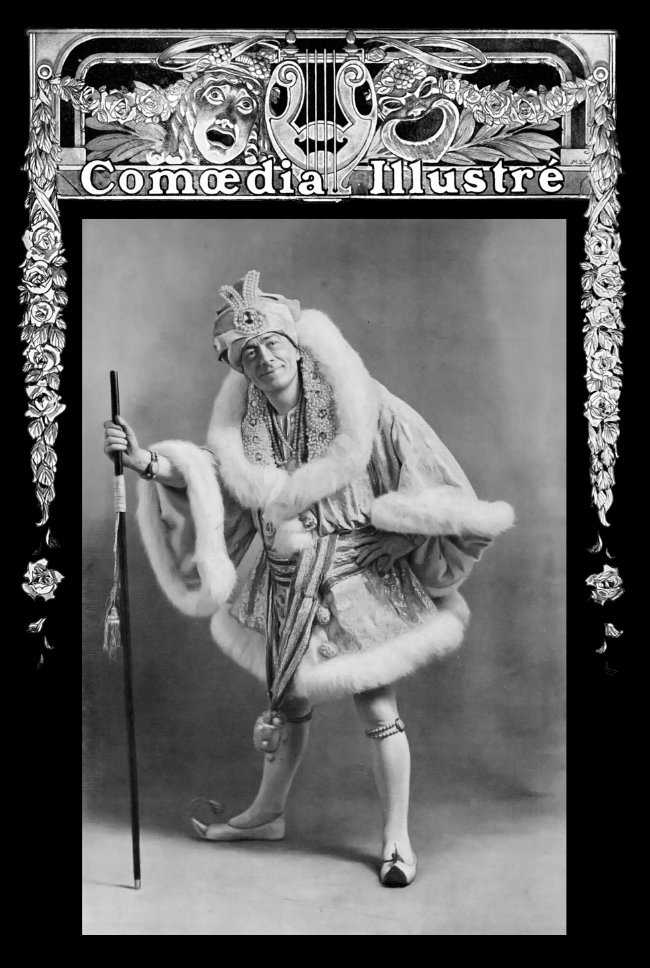 The style is eclectic, combining traditional craft motifs with Machine Age images and modern materials. From King Tut’s tomb came the inspiration for sunbursts and angles. From the Mayan pyramids came triangle shapes. Excavations at Pompeii and Troy influenced it, as did motifs from Asia, Africa, Oceania, Rome and Greece.

This style made buildings hard-edged in symmetrical geometric shapes, including chevrons and stepped towers. Softness came from stylized floral and sunbursts, along with spheres and zigzags arranged in symmetrical patterns. Materials were aluminum, chrome, stainless steel, Bakelite and plastic, along with stained glass and lacquer. The colors were vivid in blues, red, orange and gold.

But the style heavily influenced fashion and design too, which is where Erté comes in. 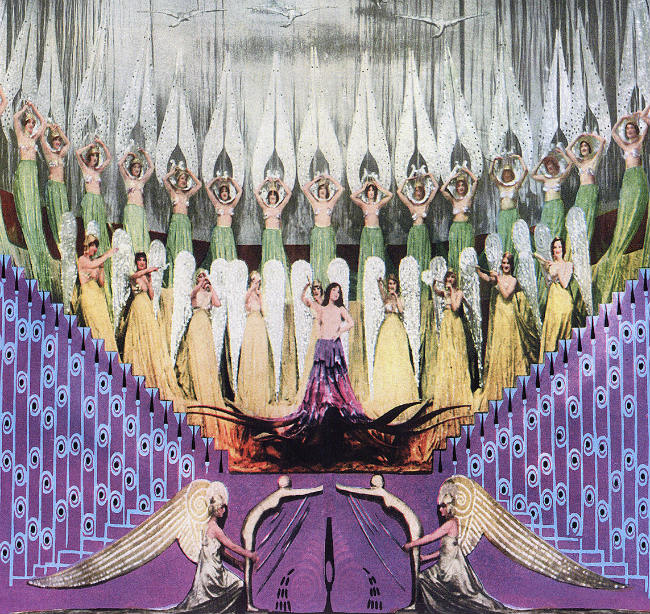 The apotheosis scene from “Rhapsody in Blue” from the George White Scandals with Erte’s set and costumes. ca. 1925 Courtesy of Gary Flannery’

Romain de Tirtoff, who created the name Erté, was born in Saint Petersburg, Russia in 1892. He was the son of a Russian inspector at the Naval Academy, but his father recognized the Navy was not a career path for his son. Erté traveled to Paris in 1912 to follow his dream of working in fashion. He collaborated with Poiret, and later submitted some illustrations to Harper’s Bazaar. William Randolph Hearst recognized Erté’s unique style and creativity and signed him for an exclusive contract of 10 years. The first magazine cover was January 1915– entitled Scheherazade. 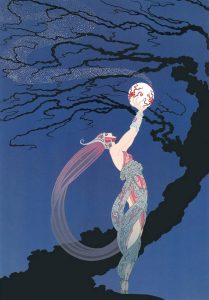 The Harper’s Bazaar partnership lasted 21 years and included 240 magazine covers and countless original fashion drawings. Initially considered flamboyant, Erté’s design of velvet evening wraps with Chinese sleeves and gold embroidery, and gowns covered in crystal and pearls became popular. His simple vertical lines, unisex clothes and use of metal in fashion influenced designers like Yves Saint Laurent in his 1976 Ballets Russes collection. According to Harper’s Baazar, Erté’s influence persists today– as seen in the flourishes and draping of the Oscar de la Renta fashion house. And the one-shoulder dress continues to be incredibly popular– Erté was the first to create that.

“Erté truly outdid himself with imaginative designs and an almost insane attention to detail,” said Stephan. “No expense was spared. If they used beads, they were crystal beads. If they used fur trim, it was black Siberian fox.”

Hollywood beckoned with Hearst and Louis B. Mayer hiring Erté to design the sets and costumes. His first movie was 1922’s The Restless Sex with Marion Davies. It mostly flopped, but notoriety was given to Erté’s costumes for the ball where the actors are dressed as gods and goddesses of foreign lands. Mayer hired him for the 1925 silent film Ben Hur. Erté went on to design sets and or costumes for Dance Madness, The Mystic, A Little Bit of Broadway, Sally, Irene and Mary and a dozen more films. He dressed actresses such as Joan Crawford, Norma Shearer and Aileen Pringle. 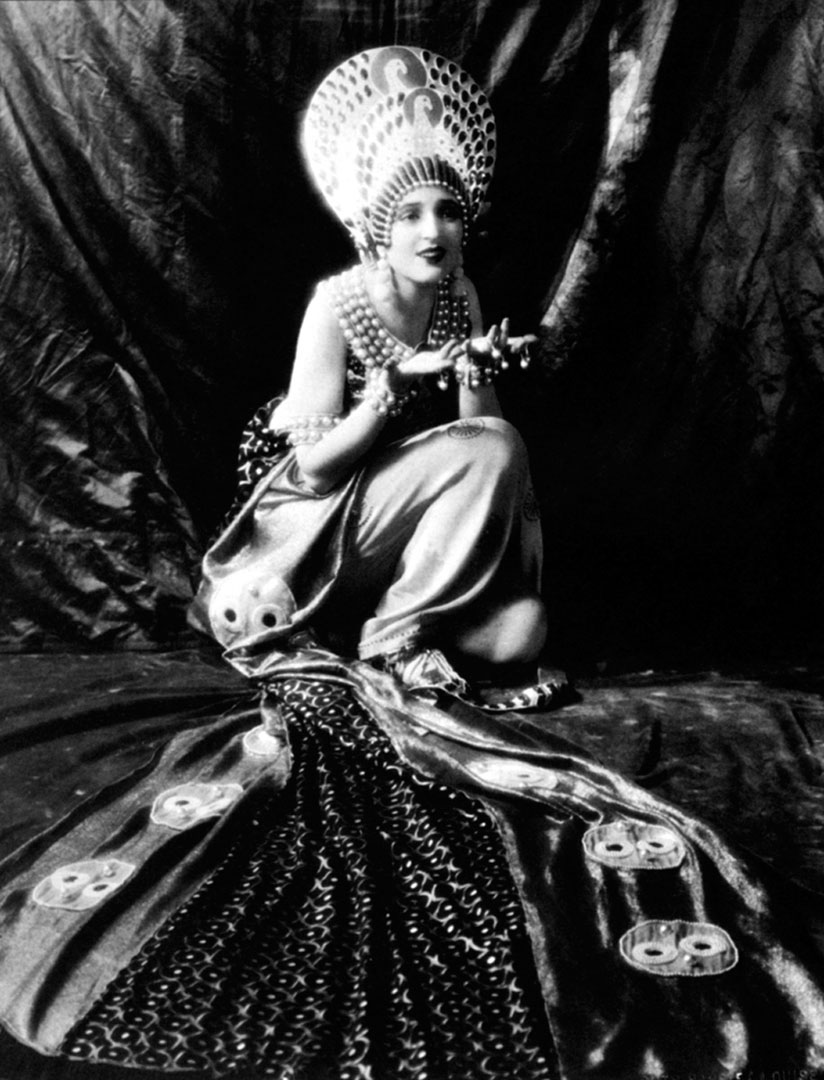 The theatre was Etré’s passion though. He designed the costumes and sets for the Folies Bergère in 1923, bringing a new flair to the stage. He spent seven years designing the same for the George White Scandals, a Broadway review.   His last project in the U.S. was for the 1939-40 Golden Gate International Exposition on Treasure island in San Francisco Bay, also directed by George White. He designed sets and costumes for music hall reviews, operas and ballets throughout the world, including the Radio City Music Hall, Paris Opera and Glyndebourne Opera Company outside of London.

In 1967, he entered the television world with set and costume design for ABC’s The Silent Night ballet featuring girls and boys representing gingerbread and chocolate. 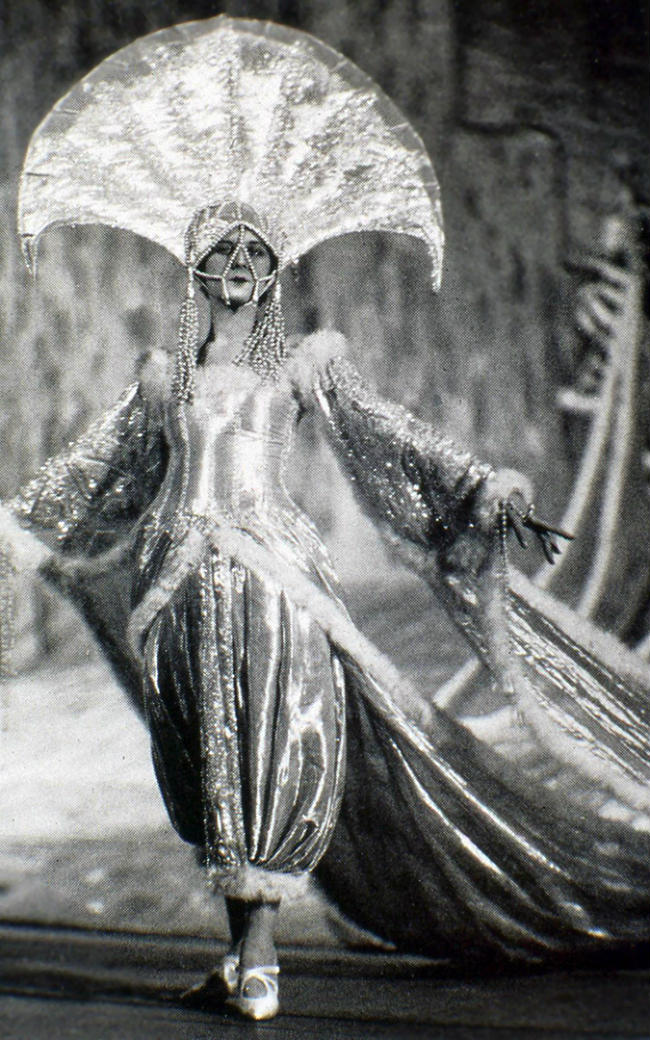 Erté first inspired Stephan– artist-in-residence for the Art Déco Society of California– when he saw a Sondheim musical in Los Angeles that featured Erté-like work. He learned all he could about Art Déco and became a theatre set and costume designer in his own right in the San Francisco Bay Area, and now in Newport, Oregon. Stephan sent Erté a fan letter, and was surprised when Erté wrote back. That started a ten-year professional correspondence and friendship that peaked when Stephan met Erté in New York to present him a lifetime achievement award from the Art Déco Society. Stephan also gave Erté one of his Art Déco prints.

“His eyes widened and he asked me ‘did you do this?’” said Stephan. “Then he started clapping, and my heart went pitter pat.”

In the late 1960s through the ‘80s, there was a resurgence of Erté’s work in the form of limited edition prints, jewelry, figurines and statues. When he died in 1990 at the age of 97, he was working on a Broadway-bound show called Star Dust. 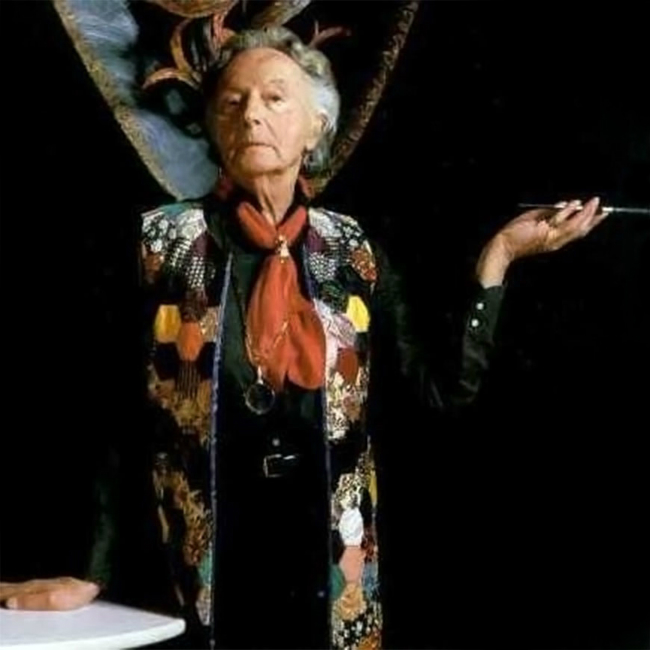 Today, some Erté prints and bronzes sell for thousands of dollars. In Paris, Stephan will be reminding the Art Déco Society members that Erté’s influence kept the style strong and timeless, whether it was in architecture or costume design.

The Art Déco buildings to explore in Paris are well known and a Google search away. However, the APADS tour has some hidden gems that are not on many lists. The tour explores Boulogne-Billancourt in the Western suburbs of Paris with the Musée des Années 30, the Hotel de Ville and the municipal police services building, along with the old film studio locations of directors such as Abel Gance. 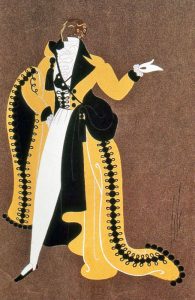 Other treats will be the Ministry of Social Affairs in the 7th with its Art Déco glass roof, the Grand Rex Theatre in the 2nd, and the Palais de la Porte Dorée, now the Museum of the History of Immigration, in the 12th. Originally built for the 1931 Colonial Fair, the African-inspired and Asian-inspired furniture in the two oval lounges on each side of the building reflect the influence of motifs in Art Déco.

“We hope that these moments will be an opportunity for fruitful exchanges between our members…so that everyone can share this common passion that unites us all – the art, style and architecture of the interwar era,” said Pascal Yves-Laurent, President of APADS.

A list of some hidden Art Déco gems to enjoy in Paris:

Le Relais Plaza, 25 Avenue Montaigne, 75008. Inspired by the interiors of the ocean liner Normandie, it dates to 1925. Check out the engraved zodiac bas-reliefs by Lalique.