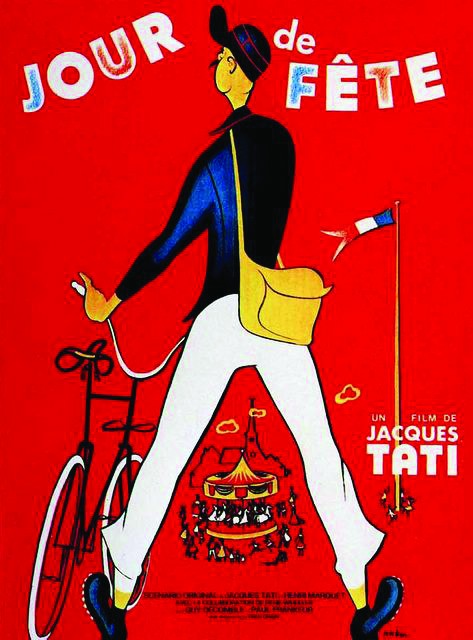 The inspiration for Jacques Tati’s first feature was a short film from two years before, School for Postmen. Prior to that, Tati has spent years perfecting his performance craft on the stage, honing the mimes which would become his celebrated Sporting Impressions in Paris’s theatres. The writer Colette enthused about his act being “partly ballet and partly sport, partly satire and partly charade”.

All of these threads were joyously woven into Jour de Fête, which sees the gangling comic playing a hapless postman who’s easily distracted by both wine and a village fair, which forces him to do his round in super-quick time. The slapstick elements are fabulous and the anti-modernity message resonates to this day, yet what’s so enduring – and remains alluringly evocative for anyone who loves visiting the French countryside – is the depiction of the gentle vagaries and unhurried rhythms of rural life.

Tati painstakingly shot Jour de Fête in both black and white and using a new, untried method called Thompson Colour. If you can, seek out the beautiful, pastel-tinged version of the 1964 re-edit, which was remastered by Tati’s daughter, Sophie, in 1995. The sight gags and hilarity aren’t lessened by black and white but the sense of place becomes more vivid with a splash of colour.

This Tati classic introduced the world to his best known and most revered comic creation, the madcap Monsieur Hulot. From the moment he turns up at his seaside hotel, Hulot’s at the centre of a hilarious whirlwind of oddball catastrophes. The film’s beach setting, at Saint-Marc-sur-Mer near Saint-Nazaire, provided Tati with an endless source of visual gags – at a tennis match, on a boat, with dogs and horses… and that’s just outside! Within the bourgeois hotel, our pipe-smoking, crazy-legged irritant confuses the staff and his fellow guests with equal aplomb.

As with Jour de Fête, the tomfoolery of Tati’s idiot savant creation was in part a vessel to deliver satire – this time he gently ribs France’s holidaying classes. This film might not necessarily provoke belly laughs from newcomers but nevertheless it remains a masterpiece of sweet comic choreography.

THE MAN FROM ONCLE

Five years after his holiday escapades, that leggy lunatic Monsieur Hulot returned for a second cinematic outing, this time in colour. Like a square peg in a round hole, Hulot can’t fit in again, but this time he’s in the city.

Trapped in a garish, hi-tech city of modern houses, he pales at the ‘life-enhancing’ gadgets on offer at work (his nephew’s hosepipe factory) and play. Hulot strikes up a bond with his 10-year-old nephew, a boy who shares his outlook and it’s there, from our hero’s interaction with the people and places which make him feel comfortable, that the heartwarming pathos arrives.

Directors such as David Lynch, Steven Spielberg and Wes Anderson are notable admirers of Tati’s work. It seems reasonable to wonder what would Tati, a man so at pains with technology’s isolating influence on modern life, make of them analysing his clever soundscapes and visual trickery on their iPads?

Tati said that he called this film Playtime and not ‘Temps de Loisirs’ – its French equivalent – because of the fashion for Americanisms in France during that period. Thus the absurdities of modernity and external influences on the traditional way of French life are once again in the firing line for what many deem one of the boldest, most important films of the 1960s. Tati spent a fortune fabricating a new world on-set, Hulot appears sporadically, and there’s a marvellous ‘car ballet’ to close.

Cars as symbols of so-called progress are again firmly within Tati’s comedy crosshairs for this zany road trip. It feature Hulot’s final screen appearance – sporting his customarily jaunty hat – as a feckless Parisian voiture designer whose plan for a new camper van sees him take his prized vehicle on a road trip to a car show in Amsterdam. The setting is due to the huge losses incurred by the big-budget Playtime which forced Tati to use Dutch investors for Trafic. Interestingly, his underwhelming swan song from 1974, Parade, would be made using Swedish TV money.

There are the usual pratfalls and some great situation comedy involving customs officers, a scathing parody of mechanics and petrol service attendants, and a majestically choreographed car accident. Of course, we laugh at Hulot and not with him, but Tati’s invention still remains magnificently sharp.