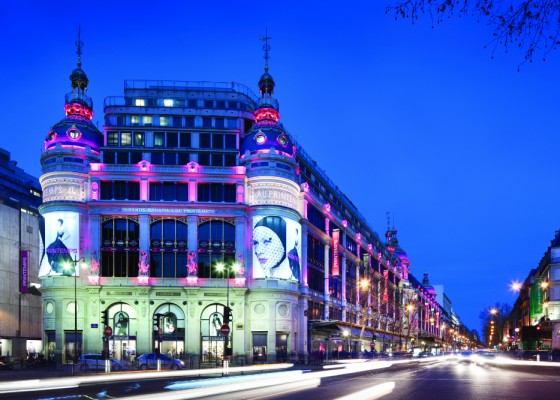 Judging from the crowds, for a vast number of visitors to Paris, the city’s bustling department stores, ‘les grands magasins’, are destinations just as alluring as the Eiffel Tower or Notre Dame – and as sacred. For well over a century, Paris’s three legendary monuments to shopping – Le Bon Marché, Au Printemps and Galeries Lafayette – have beckoned travellers from near and far with the promise of untold, and accessible, treasure. Still functioning much as they did at the time of their inception in the mid- to late-19th century, these elegant grandes dames are important historic landmarks in their own right, with as much to say about the evolution of Paris as their more lofty touristic counterparts.

The grands magasins emerged at a time of enormous flux and upheaval in Paris. At the tail end of the Industrial Revolution, when developments in manufacturing and transport ushered in the rise of a new middle class, one with increased mobility, leisure time and money to spend, these immense stores both signalled and facilitated the transition between old and new Paris.

The Paris of old was a city of narrow streets and cloistered neighbourhoods, where inhabitants did not venture far beyond their quartier, which was served by specialty shops still labouring under a 17th-century guild system which stipulated that a trader could only specialise in a single commodity, whether it be umbrellas, silks or pastries. In the late-18th century, bazaars, or places that grouped shops and cafés under a single roof or arcade – like the Palais Royal, for example – began to expand traditional notions of retailing. However, the idea of ‘shopping’ for pleasure or relaxation, as we know it today, was still some way off.

In the early-19th century glass-ceilinged passages couverts – long, enclosed pedestrian walkways lined with shops and equipped with heating and gaslights, married retailing with leisure. These precursors to the shopping mall offered a warm, sheltered place where people could meet, stroll, browse in fashionable boutiques and dine at a café or restaurant. With the appearance of the omnibus in 1828, people began to venture out further afield from their neighbourhoods, fuelling the rise of specialised shopping districts around Paris, especially in the 1st and 2ndarrondissements, and later in the 9th, when the Gare Saint-Lazare train station brought day visitors from the suburbs and provinces.

By the 1830s a new genre of store emerged that grouped a variety of goods in a single location. A few of these ‘magasins de nouveautés’ initiated a vigorous expansion that included organizing the store into distinct departments on several floors around a glass-covered courtyard. Although at least two of these newfangled department stores pre-dated Le Bon Marché, which was founded in 1852, none was as innovative or displayed the shrewd management, sales and display tactics – not to mention advertising strategies – that distinguished the newer store from the others and kept it at the forefront of retailing for decades.

It was no coincidence that Émile Zola, freshly arrived from Aix-en-Provence in 1858, based his book Au Bonheur des Dames (The Ladies’ Paradise), a minute dissection of the grand magasin, largely on Le Bon Marché. It was Number 11 in the author’s epic, 20-volume Rougon- Macquart cycle – a detailed, naturalistic chronicle of life in Second Empire France (1851-1870). The novel opens with a young girl just in from the provinces coming face-to-face with the overwhelming splendour of the grand magasin: “The most delicate flower colours radiated from a display of silks, satins and velvet in a fluid, shimmering range of tones… in the centre, a velvet coat trimmed with silver fox… on one side, a silk cloak lined with squirrel, and on the other, a linen coat edged with cockerel’s feathers; and finally evening wraps in white cashmere or white quilting trimmed with swans’ down or chenille. There was something for every taste.”

The dubious hero of Au Bonheur des Dames, store proprietor Octave Mouret, is ruthless in his tactics, offering merchandise at prices so low – or even at a loss – that he undercuts every business in the neighbourhood, driving the small shopkeepers of Old Paris to bankruptcy and ruin. He employs a new and modern economy of scale, generating profits from sheer quantity and quick turnover. In an economy hitherto based on haggling over the price of goods, almost always to the benefit of the shopkeeper, fixed prices were an ingenious innovation for whom we have Aristide Boucicaut, the founder of Le Bon Marché and model for Zola’s Mouret, to thank.

A retailing genius of humble origins, Boucicaut had other tricks up his sleeve. He devised artful displays that strategically placed lower-priced merchandise in the forefront, while mixing in more expensive items, with both benefitting from the juxtaposition. He ingeniously placed merchandise staples – lace, fabric, lingerie – at opposite ends of Le Bon Marché, forcing the mainly female shoppers to traverse the store from end to end and floor to floor, passing tantalising displays of gloves, parasols, fans, stockings, oriental rugs and a myriad of other temptations along the way. Boucicaut, and the new generation of store owners who followed – notably Jules Jaluzot, the founder of Au Printemps – capitalised on a psychology of desire that culminated in orgiastic sales which were advertised weeks in advance via posters, banners, circulated flyers and newspaper advertisements, with the dual purpose of liquidating older merchandise and drawing in new customers.

Zola’s description, an amalgam of Le Bon Marché and Au Printemps, captures the excitement, and modernity, of the annual white sale: “These ladies, carried forward by the current, were by now unable to turn back. Just as a river draws towards it all the wandering streams in a valley, so it seemed that the flow of customers, pouring through the hallway, was swallowing up the passers-by in the street, drawing people from the four corners of Paris.”

By the year of Boucicaut’s death in 1887, Le Bon Marché covered 52,000 square metres, employed some 1,788 people – at least a fifth of whom were women – and was earning 77 million francs a year, making it the largest retail business in the world.

Le Bon Marché and Au Printemp’s sales and merchandising strategies had far-reaching effects on Paris society and France at large. Via their Paris flagship stores as well as through an ever-expanding catalogue and mail order business, these department stores not only promoted seasonal styles, creating the need to constantly update a wardrobe according to the trends, but they also disseminated bourgeois values to the whole of French society. Commodities once accessible only to the rich became items of mass consumption, thus blurring class lines and fortifying the rising middle class.

Perhaps more significantly, as the grands magasins’ principal clientele, women were of central importance as consumers with purchasing power. Department stores also gave women – who, in the case of Le Bon Marché, earned wages and commissions and were housed under the store roof and fed in its cafeteria – a new means of supporting themselves independent of marriage.

The architecture of the grands magasins was also key in their mounting success. By the 1850s and 1860s, Baron Charles Haussmann’s massive redevelopment programme was quickly transforming old Paris, demolishing entire cramped and dingy blocks to make way for capacious boulevards and the uniformly pristine white-fronted buildings so familiar today. Ever-expanding stores hired young, ambitious architects – for example, Gustave Eiffel contributed to the expansion of Le Bon Marché in 1876.

In 1865, former Bon Marché employee Jules Jaluzot took advantage of an auspicious spot just around the corner from the bustling Gare Saint-Lazare train station, on the recently created Boulevard Haussmann, to open Au Printemps with funds from his wife, a substantially wealthy actress from the Comédie Française.

Within two decades, Jaluzot, a ferocious innovator in his own right, had expanded Au Printemps to an entire city block – a soaring glass and wrought iron structure embellished with statues, sumptuous mosaics and elaborate gilding. Its lovely exterior is remarkably like Zola’s model for the fictional store Au Bonheur des Dames, but since the novel was published the same year that Au Printemps opened, this is difficult to confirm. Au Printemps was the first department store to install elevators and the first building in France to be lit by electricity, a mere three years after the introduction of Thomas Edison’s electric bulb.

After a fire in 1920, Au Printemps’ interior was rebuilt to include a magnificent jewel-coloured cupola, which was entirely dismantled in 1939 to preserve it from air attacks, and restored to its modern-day magnificence in the 1970s.

Meanwhile, in 1895, two cousins from Alsace, Théophile Bader and Alphonse Kahn, had set up a haberdasher’s shop just down the street, at the intersection of Rue de la Chassée d’Antin and Rue La Fayette. This canny location easily capitalised on its proximity to the Opéra Garnier, the Grands Boulevards and Gare Saint-Lazare, where crowds of Parisians and out-of-towners alighted each day.

From there, the cousins expanded to occupy five adjacent buildings. But it wasn’t until 1912 that Galeries Lafayette came fully into its own, with the unveiling of its spectacular domed flagship, designed in the height of Art Nouveau splendour and including a sweeping ironwork staircase rising 43 metres to the store’s iconic neo-Byzantine stained glass dome, which remains its symbol. Boasting 96 departments, Galeries Lafayette, the only one of the three grands magasins that’s still family owned, quickly became the monument to fashion and luxury which it remains to this day.

In fact, each of Paris’s three great grands magasins remain true to their legacies, in outlook and pedigree. Le Bon Marché on the Left Bank attracts an exclusive clientele, for its patrician address in the chic 7th arrondissement, food hall – totally remodelled in 2013 – and its uncrowded spaces. On the Right Bank, the neighbouring Galeries Lafayette and Au Printemps continue to innovate with an eye to their glorious past. Galeries Lafayette with an emphasis on art and creation via its imaginative, fashion-forward windows and the new Galerie des Galeries exhibition space, inaugurated in 2013. Au Printemps, meanwhile, has undergone a luxe new makeover and in 2013 celebrated the opening of its spectacular new Louvre branch, its first in 32 years, just opposite the museum entrance in the Carousel du Louvre.

Above all, the continued vitality, popularity and relevance of Paris’s three grandes dames proclaim France as ever-upholding its place as the world leader in style, fashion and savoir faire.