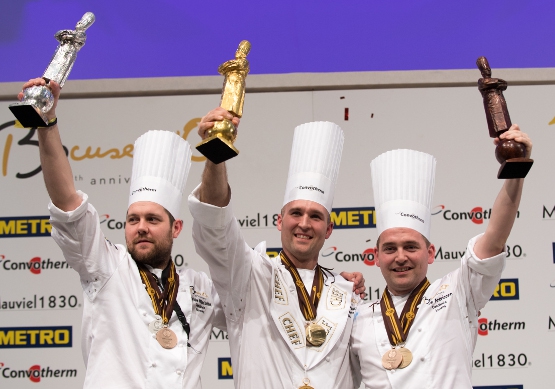 For the first time in the 30-year history of the Bocuse d’Or culinary competition, a team of American chefs took home the gold medal. There were 24 countries competing, and Norway placed second, while Iceland came in third. The finals took place in Lyon, often referred to as the culinary capital of France.

Legendary French chef Paul Bocuse first founded the competition. This year’s challenge? Prepare a meat platter and a vegan dish in 5 hours 35 minutes. For their interpretation of Poulet de Bresse aux Écrevisses, the American chefs even brought some American ingredients with them. Even non-vegans will swoon over the New York Times description of the vegan dish: “California asparagus with cremini mushrooms, potatoes, a custard made of green almonds, Meyer lemon confit, a Bordelaise sauce and a crumble using an almond and vegetable yeast preparation that mimicked Parmesan cheese.”

Chef Thomas Keller is the President of Team USA. Head chef Mathew Peters (previously the executive sous-chef of Keller’s New York restaurant, Per Se) and his commis, Harrison Turone from Omaha, took a year off to prepare for the contest.