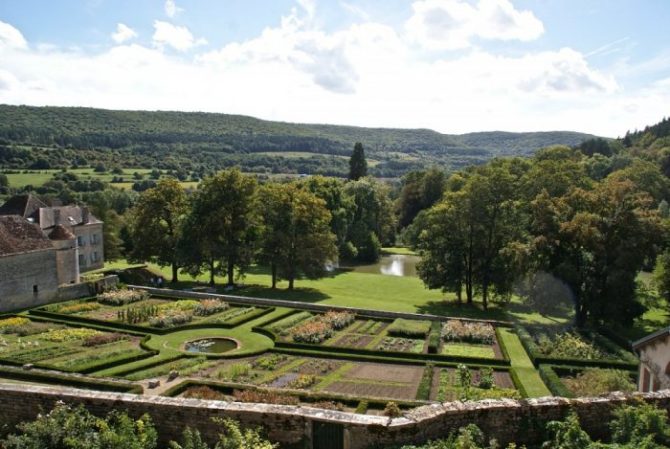 The Gallo-Roman settlement of Divio grew into the capital of the powerful 13th/14th-century dukes of Burgundy, whose territory stretched to Flanders and the Netherlands. The Ducal Palace, once the seat of Burgundy’s Parliament, now houses the Beaux-Arts museum and the spectacularly beautiful tombs of Philippe le Hardi and Jean sans Peur. Wander through the medieval and Renaissance streets of the old town, watch the automated figures on the 14th-century clock tower of Notre Dame strike the hour and quarter-hours, rub the church’s small stone owl for good luck. The covered market, with a metallic structure designed by Gustave Eiffel, houses a cornucopia of fabulous food, and during the annual wine festival the Bareuzai fountain, where a bronze nude tramples grapes, briefly flows with real wine.

A 30-mile stretch of vineyards that produce some of the finest wines in the world, the Gold Coast is divided into the Côte de Nuits—from Marsannay to Corgoloin—and the Côte de Beaune—from Ladoix-Serrigny to Santenay. Along the route, among others: Gevrey-Chambertin, Clos de Vougeot, Vosne-Romanée, Nuits-Saint-Georges, Pernand-Vergelesses, Aloxe-Corton, Pommard, Volnay, Meursault and Puligny-Montrachet.

The midpoint of the Côte d’Or, the original capital of the dukes of Burgundy is encircled by nearly intact medieval walls. The splendid Hôtel-Dieu, a charity hospital founded in 1443, is the city’s great treasure, famed for its multicolored Burgundian roof and the vaulted Grande Salle of red-curtained alcove beds. Hôtel Dieu is part of the Hospices de Beaune, whose famed annual wine auction is held across the street. Many Burgundy wine négociants have their cellars in Beaune, some open for visits, and the former ducal residence houses a wine museum. For gourmet travelers: Moutarderie Fallot, Charcuterie Raillard, Confiserie Mulot & Petitjean. Nearby: the medieval town of Nolay, Château de La Rochepot, and the cheese-making Cîteaux Abbey.

THE WIDER REGION, ZIGZAGGING FROM NORTH TO SOUTH

A main port for barge traffic on the river Yonne, Auxerre is dominated by the flamboyant Gothic cathedral of Saint Etienne, renowned for its 13th-century stained glass, and the turreted 15th-century Tour de l’Horloge.

The charming town whose wonderful white wines have suffered from flagrant misuse of the name worldwide. And, for the stout of heart, the home of andouillette.

The beautifully restored 12th-century Cistercian monastery, with its cloister, gardens and forge, is a bastion of Romanesque art and a UNESCO World Heritage site. Nearby: the châteaux of Ancy-le-Franc, Tanlay and Bussy-Rabutin.

An adventurous team of architects, historians and artisans are building a replica of a 13th-century château-fortress in the forest of Guédelon, using medieval materials and techniques, with power provided by horses, oxen and men in “squirrel-cage” wheels. Construction began in 1997; completion is slated for 2025. Visitors can converse with the stone-carvers, masons, carpenters, basket-weavers, cartdrivers, blacksmiths, potters, rope-makers and others as they work.

The château, encircled by double walls, has belonged to the Guitaut family since the 17th century and is open to the public for visits. Epoisses cheese, described by Brillat-Savarin as “the king of cheeses”, was first made in a nearby monastery and, after a decline, was revived by the Berthaut family in the 1950s—their Fromagerie Berthaut is in the village.

The hilltop abbey of Vézelay was a major starting point for the medieval pilgrimage to Santiago de Compostella. Founded in the 9th century, it was by turns Cistercian, Benedictine and Franciscan. Today it’s run by the modern Monastic Fraternities of Jerusalem, and tourists greatly outnumber pilgrims, but Sainte Marie Madeleine basilica remains one of the great historic, architectural and artistic sites in France.

The 20-acre park and gardens of the château of Barbirey, west of the Côte de Nuits, include a big flower-trimmed kitchen garden, an orchard, a rock garden, ponds and a rustling stream. The château has five guest rooms.

The grand, walled Roman city of Augustodunum, founded in the 1st century BC, was destroyed by barbarian invasions and brought back to prosperity in the Middle Ages by the city’s Rolin family, starting with Nicolas Rolin, chancellor of the dukes of Burgundy, and his son, Cardinal Jean Rolin, the bishop of Autun. (Among his successors as bishops of Autun: Gabriel de Roquette, the inspiration for Molière’s Tartuffe, and Talleyrand.) See the Roman ruins, Saint Lazare cathedral, the Musée Rolin.

It’s impossible to exaggerate the religious, intellectual and political influence of the medieval Abbey of Cluny, which reigned over a vast monastic empire. It was largely destroyed after the French Revolution, but enough remains to convey an idea of its grandeur. Nearby: the escargot farm, L’Escargot Brionnais, near Briant.

The Royal Monastery of Brou, at the southeastern tip of the Burgundy region, is now surrounded by the suburbs of Bourg-en-Bresse. The church, with its side chapels, rood screen, stained-glass windows, richly carved royal tombs and triple cloisters, is a paragon of flamboyant Gothic and Renaissance art.

From the France Today archives, updated in June 2014.