An Exclusive Excerpt from Mimi Thorisson’s Book, A Kitchen in France 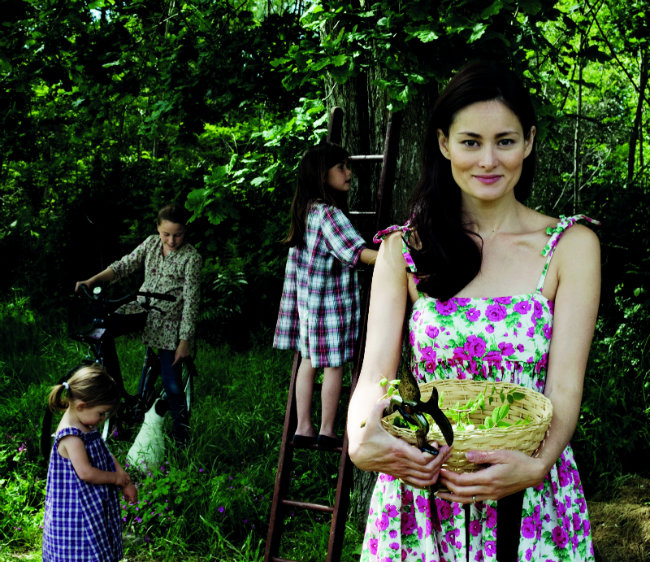 There is a ferry that sails south from the town of Royan, on the Atlantic Ocean, to Le Verdon at the northern tip of the Médoc peninsula. It is not a particularly charming ride – nor one I had ever planned on taking. Yet one day in late autumn some years ago, I found myself on that ferry with my husband, three kids, five dogs, and a baby on the way. We had given up our apartment in the lovely 7th arrondissement of Paris, found a house in Médoc, and, voilà, there we were.

How did an only child from bustling Hong Kong, born into a family with a fondness for cats, whose French mother hardly ever set foot in the kitchen, end up on that ferry? I don’t know exactly, but I think my current country lifestyle – complete with a big rowdy family, lots of dogs, and a huge kitchen where I can make all my culinary fantasies come true – is something I always wanted. Mimi Thorisson and family in “A Kitchen in France.” Photography by Oddur Thorisson

We spent our holidays in Paris or in the south of France with my mother’s family. There I was introduced to a whole other world of tastes and flavours, a new universe of gastronomic delights. My grandmother and aunt were both terrific cooks, and every day meant a feast. We started many mornings with a trip to Monsieur Gourdet, the best greengrocer in Moissac, where my grandmother would spend a whole hour choosing the freshest vegetables, fussing over small details, sniffing, observing. Going to the market was like a trip to the museum – each artichoke was a sculpture to be admired. Then we’d have our little moments in the early evenings, just the two of us, peeling away the artichoke leaves and dipping them in her signature vinaigrette, until we reached the best part, the heart. That’s when she would say, “You have it, chérie; you’re so thin.” My aunt, on the other hand, could take whatever was available and turn it into the most miraculous dishes: fish soup with ruddy coloured rouille, roasted lamb with garlic and flageolets, and an endless repertoire of soups, including my favourite, broad bean soup. My grandmother was the food philosopher, my aunt the master technician. While my childhood was filled with food, rarely was I the one in the kitchen making it. Later, as a student in Paris and London, I had my signature dishes, things I was proud of and that reflected my tastes, but I always spent more time in restaurants than in my kitchen. It wasn’t until I married and started a family that the kitchen won me over. Yet I feel as if I had been preparing for this role all my life; all the places I’ve been, the meals I’ve had, come together in the pots and pans of my kitchen.

It was an unplanned process that led us to Médoc. Even now I would be at a loss to explain exactly why we took the plunge. But we needed a bigger place for a growing family, so why not think outside the box, outside Paris? My husband wanted more dogs, we wanted to see the kids running around in a big garden, we were up for an adventure. Mimi Thorisson in “A Kitchen in France.” Photography by Oddur Thorisson

The last few years have been a revelation. For a city girl to move to Médoc, one of the more remote and untouched parts of France, was a bit of a shock. I felt somewhat lost the first few months – no hairdresser downstairs, no bakery on the corner. In their place, I have a view of the forest from my bedroom window and, when I am really lucky, a herd of deer roaming my garden in the early hours, so quietly that the dogs don’t even notice them. Gone are the parquet floors of our apartment in Paris, the rosettes and stately flourish, the marble mantlepieces, the black painted French balconies, and our tiny kitchen. Now we have beautiful stone floors, rustic walls with real character, fireplaces in every room (which we use for grilling birds in winter), thousands of roses climbing up the wall and decorating one side of the house, and a giant rosemary bush just outside the kitchen that perfumes the dogs as they pass and then bring its scent into the house.

Never have I been so aware of the changing of the seasons, the different pleasures that each of them has to offer. I grow my own vegetables and even some fruits. I’ve made peace with the moles that dig up our garden. Gradually we have found our favourite everything – from the best baguette to the most perfect duck legs, from where to buy foie gras, to which wines we like best and from what years. We’ve befriended the winemakers, snail farmers, and hunters who regularly pass by our house (and make our dogs crazy). A meal from “A Kitchen in France.” Photography by Oddur Thorisson

I am fascinated by the contrasts of the Médoc region, which boasts pine forests where wild boar roam, endless white beaches, and some of the most famous vineyards in the world. When I first came here, I was worried that the châteaux had been modernized too much and lost their charm, so I was relieved to find that even if the owners had brushed up on their techniques, the building façades remain as glorious as ever. Driving up from Bordeaux, through Margaux and Pauillac, is like being in an American movie about France, in the best possible sense. In some ways, Médoc is the anti-Provence, for better and worse – not a souvenir shop in sight, and sometimes, less conveniently, not even a loaf of bread. A peninsula detached from the rest of France, Médoc is unknown to many, even to many French.

In April, all of France (and most of Europe) goes crazy for asparagus. For a precious month, everybody tries to get their hands on as much as they can, and no matter where you go, you will be served asparagus. Here in the Bordeaux region, the white variety is most popular. I like to serve the spears with a simple vinaigrette and a poached egg, but my favourite asparagus recipe is this starter: delicate green asparagus wrapped in Bayonne ham and sprinkled with chervil and Parmesan. If I have dinner guests on short notice, I often fall back on this uncomplicated dish. 1. Preheat the oven to 200°C. Trim away the bottom third of each asparagus stalk. If the asparagus are thick, peel the stalks with a vegetable peeler. Wrap 4 to 5, depending on size, in a slice of the ham and secure with a toothpick. Repeat with the rest of the asparagus and ham.

2. Put the asparagus on a baking sheet, leaving a little room between the bundles. Season with salt and pepper and drizzle with olive oil. Roast until the ham and asparagus are browned and the asparagus is tender, about 30 minutes. Just before serving, sprinkle the chervil and some Parmesan shavings over the asparagus.

Roast chicken is very much a usual suspect at our dinner table. Throughout the years, my go-to version was somewhat Italian in style, perfumed with olive oil, lemon, and thyme. A few years ago, though, I started experimenting with more “French” ingredients, including crème fraîche and lots of garlic. The experiment has been nothing short of a success story and this recipe has dethroned the other version to become our most wanted chicken dish. In fact, it’s probably the recipe that dinner guests ask for most often. I once had a guest whose face lit up when he took his first bite and he said, “When I had the glass of Lillet I was pretty sure I was in France, but now that I’ve had this chicken, I know I couldn’t be anywhere else.” I guess that’s a compliment, right? A large bunch of fresh parsley, leaves removed and chopped

A few sprigs of fresh thyme

1. Preheat the oven to 180°C. In a small bowl, mix the crème fraîche, garlic, shallot, parsley, and thyme. Season with fine sea salt and pepper. Spoon half of the mixture inside the cavity of the chicken. Truss the chicken securely with kitchen twine. Rub the remaining cream in a thick layer all over the chicken (make sure to rub under the thighs and wings). Sprinkle the coarse salt over the chicken and put it in a roasting pan.

2. Roast the chicken until golden brown and cooked through (the juices should run clear, not pink, when you prick the thigh with a knife), about 1 hour. Check the pan halfway through the cooking and add a few tablespoons water, or more if needed, if the bottom of the pan has started to dry out.

3. Let the chicken rest for 15 minutes before serving. When Mardi Gras season starts, every boulangerie in France sells merveilles and bugnes, heavenly little fritters that taste like old-fashioned charms. They are traditionally made in February and March because of the carnival festivities, but I like to make them at any time of year. It gives me great pleasure to see them puff up in the golden oil and then I shower them with a generous amount of icing sugar. My grandmother used to say they bring good luck and chase away bad spirits. Sounds like a good excuse to eat more of them.

1. Put the flour in a large bowl and make a well in the centre. Add the butter, eggs, granulated sugar, salt, baking powder, lemon and orange zests, and rum to the well. Mix everything together with your hands, gradually bringing the flour into the centre. Shape into a ball, dust with flour, and wrap in plastic wrap. Refrigerate for 1 to 2 hours.

2. Dust a work surface with a little flour and roll out the dough 6 mm thick. With a pastry wheel or a knife, cut into 40-cm-long bands that are 5 cm wide. Then cut on the diagonal to make 12.5-cm-long diamond shapes.

3. Heat 5 cm of oil in a large pot over medium heat. Test the temperature of the oil (it should reach 160°C) by dropping in a small piece of dough – if it turns golden within seconds, the oil is ready for frying. Working in batches, add the dough to the oil and fry until golden and puffy, a few seconds or so on each side. Remove with a slotted spoon, drain on paper towels, and immediately sprinkle with icing sugar. Serve hot.

WHERE TO BUY THE BOOK

A Kitchen in France: A Year of Cooking in My Farmhouse by Mimi Thorisson. Published by Hardie Grant, priced £25.00 Hardback. Out now. Photographs by Oddur Thorisson. Mimi Thorisson in “A Kitchen in France.” Photography by Oddur Thorisson

As seen in France Today magazine

Previous Article Where to Eat Now in Paris: Mensae in Belleville
Next Article La Dernière Goutte: A Wine Lover’s Gem in Paris