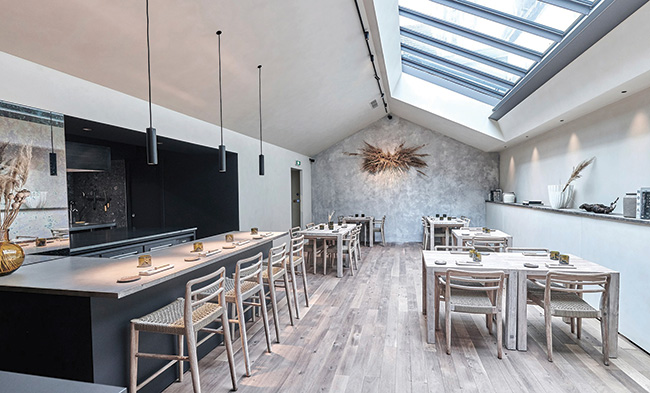 It was in the refectory-style dining room of this luminously beautiful restaurant in a 17th-century stone building in the historic heart of Dijon that I tucked into my best meal of 2022 so far. From the moment we were seated at our heavy, bare-wood table with beige linen napkins, everything chef Angelo Ferrigno sent to the table from his open kitchen was simply spectacular, which made it no surprise that in 2016, at the age of 23, he became the youngest French chef ever to win a Michelin star. This year, Ferrigno, now 29, was anointed as one of the Grands de Demain (Big Talents of the Future) by the other French gastronomic guide and website Gault & Millau.

All of these honours notwithstanding, for me, the proof is always in the pudding, or rather, in startlingly original and delicious hors d’oeuvres like raw catfish with beets, raspberries and omble chevalier (Arctic char) eggs, the exquisite little mouthful that debuted our meal. In a single, beautiful bite, it displayed the raison d’être of Ferrigno’s cooking, which is a ferocious devotion to the products created by small, independent farmers, cheesemakers, fishermen and others, a fierce desire to work with local seasonal produce, and an admirable insistence on a running an environmentally sustainable kitchen, right down to paying a private company to collect kitchen waste for composting.

Enjoy delicious food in the heart of Dijon © CIBO

Next on our four-course menu were grilled leeks with farmer’s cheese and vin jaune, an earthy but casually refined constellation of tastes and textures. Pike perch with grilled Brussels sprouts, citrus and smoked cream was an eerily elegant dish which spoke of wintry Burgundian churchyards and monasteries, while the vividness of the preserved blackcurrants that garnished a pearled filet of guinea hen with yellow turnips winked at lush memories of a local summer. Cassis, or blackcurrants, made a final appearance in a dessert of fresh ewe’s milk cheese with chestnuts and a coiffe of meringue, a dessert that would surely have delighted Colette, a native Burgundian whose writings rejoiced in the region’s local foods and cooking.

Since I’m not trying to sell you tyres, road maps or anything else, I hope you’ll trust me when I say that this restaurant merits a trip to Dijon just by itself, but advance booking is essential before you set off.