Le Môle Passédat: The Restaurant at MuCEM in Marseille 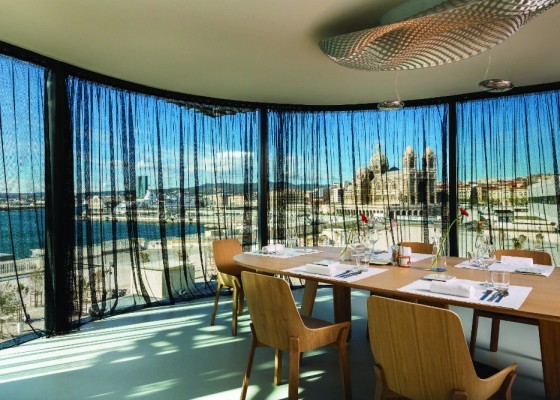 With a glamorous setting on the top floor of architect Rudy Ricciotti’s stunning new MuCEM (Museum of European and Mediterranean Civilisations) at the entrance to Marseille’s historic Vieux Port, three-star Michelin chef Gérald Passédat’s new gastronomic restaurant La Table has become one of the most sought-after reservations in the city since it opened in June. Holding up a gastronomic mirror to the museum’s mission, which is to study and display the cultures of the countries that surround the Med, Passédat’s menu, which is executed by chef Philippe Moreno, skilfully navigates this littoral to create dishes that reflect the constant culinary mixing and muddling of its different cultures. In doing so, it also creates an intriguing edible portrait of Marseille itself, since it’s one of the most ethnically diverse cities in the world.

The dining room itself projects a suave modernity, with fine opaque black veneer curtains on the floor-to-ceiling windows filtering the strong southern sunlight without blocking the nearly infinite views of the topaz sea. Otherwise, volume is created by clusters of stainless steel ‘clouds’ on the ceiling, the large space is given scale by oversized pots of plants and the sleek blonde oak furniture is retro Sixties Scandinavian in style.

Though it took persistence to obtain a reservation through the Internet-only reservations system on chef Passédat’s website, a recent lunch here more than rewarded the effort with cooking that was intelligently provocative and deeply satisfying. If Passédat sources most of his produce and seafood as locally as possible, he draws inspiration from all of the Mediterranean’s kitchens with original and appetising results. Choosing from the brief menu when lunching with a friend, I loved my starter of dressed crabmeat with lemony quinoa salad and garnishes of harissa topped with fresh mint leaves and a diminutive baguette topped with roasted red peppers and garlic chips. My friend’s octopus carpaccio was excellent, too – razor- fine slices of fish with a light gloss of citrus dressing.

Main courses were equally good, including “Le bouillon de pêche à la Marseillaise,” impeccably fresh seafood in a light but ruddy broth that winked at the city’s famous bouillabaisse, and just-landed wild sea bass resting on a pool of sauce vierge under a tangle of razor-sliced fennel bulb. Beautifully prepared and served, what I perhaps most appreciated about this cooking is that it remained firmly anchored in local gastronomic tradition, while remaining bracingly modern and cosmopolitan.

Service from earnest young staff is charming and if this place is great at lunch, it becomes cool-operator romantic in the evening when you can spot ships in the distance and enjoy the glittering lights along Marseille’s stunning coastline.

Previous Article Paradis à la Folie: Cabaret on the Left Bank
Next Article My France Favourites: An Interview with The Podolls