The Fête-tastic 60th Birthday for Relais & Châteaux at Georges Blanc 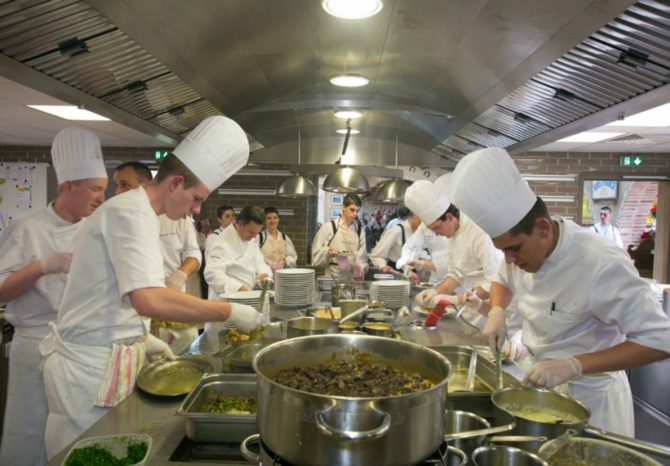 The French foodosphere recently gathered to fête the 60th birthday of Relais & Châteaux in grand style. (Appetisers prepared by star chefs like Michel Troisgros, free flowing Moët & Chandon, and did we mention the enormous pop-out cake?) From Gare de Lyon in Paris, actors dressed in 1950s-style attire directed us to a special southbound train to Mâcon-Loché, where we were ushered into vintage cars (like the Citroën DS) for the final leg of the journey to Georges Blanc’s food fiefdom in Vonnas.

In total, 70 Grands Chefs were in attendance with 54 Michelin stars between them. This was the ideal occasion for France Today to get the scoop on the latest news in the French culinary world. Oliver Roellinger of Les Maisons de Bricourt told us to keep an eye out for chef Alexandre Gauthier at La Grenouillère in Nord-Pas-de-Calais. “You wait and see; he’ll be the best chef in France in two years’ time.” Roellinger, the Vice President of Relais & Châteaux who famously turned in his Michelin stars in 2008, has become a modern-day champion of spices, traveling the world to seek out the best for his spice shops. “I use spices like a punctuation in writing,” he explained. “There’s a unique French art to blending spices, and our location in Brittany highlights the French maritime adventure, when explorers brought back products to France which helped created our cuisine as we know it today.”

Michel Trama told us about his new “Poule d’Or” auberge inside his gastronomic restaurant in Puymirol (southwest France). And Georges Blanc, the Michelin three-star chef who hosted the party, recently collaborated on the menu at the buzzy Hotel de Paris in Saint Tropez. “I love my job, giving so much pleasure to people. I see it as like being the conductor to a symphony, orchestrating the menus. And Relais & Châteaux, these folks seated here, are like a family to me,” Blanc explained.

Indeed the prestigious hospitality association traces its origins to Blanc’s corner of France. It was on May 12, 1954 when Marcel Tillroy gathered hoteliers and chefs to launch the idea for what was originally known as “Relais de Campagne.” Over a meal at the Chapon Fin, belonging to Georges Blanc’s uncle Paul, the impassioned group came up with the idea of a gourmet itinerary, or a Route du Bonheur, between Paris and the French Riviera. Eight charming establishments would welcome guests with hospitality and good food. “One day, this route will traverse the world,” Tillroy said. And today, the original vision for Relais & Châteaux has been realized, with 520 maisons on every continent, each full of personality and celebrating a unique art de vivre.

Lunch echoed the classic French meal of yesteryear: frog legs sautéed in parsley, Mere Blanc’s legendary Poulet de Bresse with morels and Vonnas-style pancakes, followed by sweet Bresse galettes for dessert. Luckily for the invitées, Moët Hennessy was one of the event sponsors, meaning generous pours of Champagne and cognac. Christophe Navarre, CEO of Moët Hennessy, said, “We support more than ever before the tradition and savoir-faire of the excellent family-owned properties which have marked the history of Relais & Châteaux.”

But the feasting didn’t stop there. After a pause, guests dressed to the nines for a lavish multi-course meal at the Michelin three-star restaurant, starring a ‘surf and turf’ jellied oyster garnished with Oscietra Royal caviar, lobster in vin jaune, Aveyron lamb pastry stuffed with foie gras— all paired with Dom Pérignon and Château d’Yquem wines. Heureusement, we could sleep off our food coma at Georges Blanc’s five-star hotel.

A word about the setting: Georges Blanc has created a culinary destination which embodies what Michelin had in mind when they created their star rating system. (One star= “A very good restaurant in its category”. Two stars= “Excellent cooking, worth a detour”, and three stars= “Exceptional cuisine, worth a special journey.”) Georges Blanc has dedicated his life to reconstructing the original village where his great-grandparents ran the auberge, renovating some 30 houses around the restaurant. Nestled on a park next to a river, the village gourmand is a foodie destination that draws movie stars and dignitaries to the rural countryside outside Lyon.

Previous Article Where to Eat Now In Paris: Restaurant David Toutain
Next Article What’s On in Paris: Bill Viola at the Grand Palais