A Look At the Loire 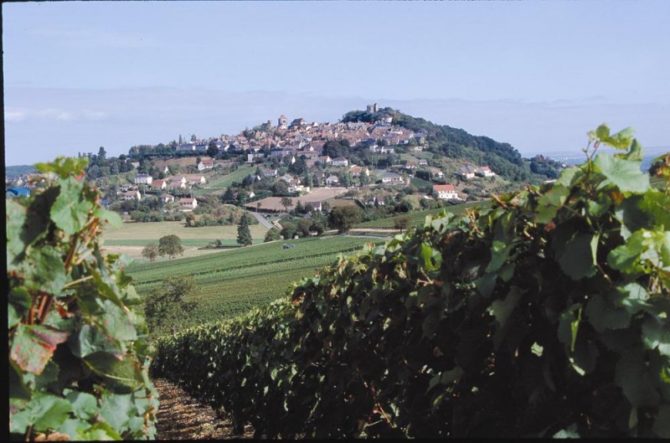 For most wine lovers, the Loire Valley begins around the beautiful old city of Tours, in the heart of the vineyard country, a quick 90 minutes southwest of Paris by high-speed TGV train. But not for me. My Loire began right here in Paris in the little rue Saint André des Arts. It was there, too many years ago, at the wonderful old bistro Allard—not the current one, the original—that I fell in love with Sancerre.

The Loire Valley produces a dazzling array of wines and over the years I’ve tasted most of them. But Sancerre is my first love. André Allard stocked great Burgundies, but his house wine was his green-gold Sancerre, served icy cold, sharp and fresh. Who supplied it, I never learned. There were no labels, just an illegible chalk mark on the side of each glistening bottle. Allard’s signature dishes, among them canard aux olives and petit salé, demanded Burgundy, but his turbot au beurre blanc and Loire salmon, served only from January to May, were meant to be matched with Sancerre.

Sancerre is named for the region where it is made, along the banks of the Loire River, due east of Tours. The Sancerre grape is sauvignon blanc. It’s a good marriage—sauvignon blanc gave Sancerre one of France’s best white wines, and Sancerre returned the favor, defining sauvignon blanc for the rest of the world. Tasting yet another undistinguished California sauvignon, one is tempted to say: “Pleasant, but it’s no Sancerre.” Tasting a tart, vibrant New Zealand sauvignon blanc, one might remark: “Delicious, much like a good Sancerre.”

Seduced by Allard’s Sancerre—and Madame Allard’s cooking—I swore to be ever faithful. But once in the Loire Valley, I swiftly broke my vows. How could I not? The Loire, which rises in the south, in the Massif Central, and travels 629 miles north and west to the Atlantic Ocean at Nantes, is the longest river in France. Along its banks are five major wine regions, 68 appellations (at last count), hundreds of wines—some irresistible, many forgettable—and several thousand growers and producers. Starting upriver and working down, Loire wines include Sancerre, Pouilly-Fumé, Quincy, Reuilly, Menetou-Salon, Cheverny, Vouvray, Montlouis, Bourgeuil and Saint Nicolas de Bourgueil, Chinon, Saumur and Saumur-Champigny, Savennières, Muscadet and Gros Plant du Pays Nantais.

Almost all Loire wines are white. There are some creditable reds, made from cabernet franc, malbec and pinot noir, delightful to drink in the towns along the riverbank where they are made but lightweights compared with the stars of Bordeaux and Burgundy. There are also some attractive, Beaujolais-like gamays from vineyards far in the south around Roanne that probably shouldn’t be associated with the Loire. These light reds are from the Côte de Forez and the Côte Roannaise, regions closer to Beaujolais than to the better-known sections of the Loire.

No, the best Loire wines are white, typically—but not always—low in alcohol and high in acid, making them just right for fish. There is sauvignon blanc, of course, from the grape of the same name. Then there is muscadet, another wine named for its grape, and also a wine often teamed up with fish, as well it might be since it comes from the windswept vineyards around the old Breton port of Nantes. It is straw colored, light-bodied and meant to be drunk young. It is also immensely popular, with some eight million cases a year finding their way to wine lovers on both sides of Atlantic.

The true name of the muscadet grape is melon de Bourgogne. It came from Burgundy, where it wasn’t much good for anything, and thrived in the rugged coastal climate of the lower Loire Valley. Since, after three centuries or so, there isn’t any more of the stuff in Burgundy, calling it muscadet would seem to make sense.

Vouvray, the white wine of Touraine, made exclusively from the chenin blanc grape, is another of my Loire favorites. The vineyards are on the north bank of the river, close to Tours. Vouvray can be dry or sweet, it can be pétillant—slightly sparkling—or totally sparkling, like champagne. Aged Vouvray, golden and semisweet, can be exceptionally good, and is exceptionally rare. I was lucky to be on hand when Gaston Huet, one of the grand old men of Vouvray, broke open a bottle from the 1920s, one of his rarest, to celebrate his victory over France’s national railroad, the SNCF. The insensitive railroaders had planned to run the main line of their high speed TGV Atlantique right through one of his best vineyards; but Huet, backed by neighbors and some wine loving pols in Paris, had forced them to run their trains under his grapes, through a tunnel. In her essential book on the Loire, Jacqueline Friedrich characterizes Huet wines as “terroir-driven Vouvrays of great authority and power.” That about says it all.

Chenin blanc is also the grape of Savennières, in the Anjou region of the Loire Valley, about halfway between Tours and Nantes. The great vineyard in this commune is the Clos de la Coulée de Serrant. Owned by the Joly family, it overlooks the Loire and in good years can produce what may be the Loire’s finest white wine. Nicolas Joly, who gave up banking  in New York and London to return to his vines, is considered the leader of the biodynamic movement in France. Biodynamics is extreme organic farming meant to reverse the effects of years of artificial fertilizers by allowing the soil to regain its natural energy. Vintners from all over the world have found their way to Savennières, to learn long-forgotten principles of chemical-free farming, according to which sowing and harvesting dates are often determined by astronomical observations.

rst planted by Cistercian monks in the early 12th century, and the remains of the original monastery are still part of the domain. Louis XI is said to have called the wine “la goutte d’or“, a drop of gold, and it was famous at the court of Louis XIV. At its best, it’s an unforgettable wine and, reportedly, it’s been at its best more consistently since Joly’s daughter Virginie took over the winemaking a few years ago. Be aware, it is also intensely complex, like a majestic Pauillac. Someone once said learning about white wine from Coulée de Serrant is like learning about music from a Beethoven quartet.

Sancerre, Vouvray, Savennières—it’s a good start. A full tour d’horizon of the Loire Valley would have to include Marc Bredif’s Vouvrays, the Pouilly-Fumés of the late Didier Dagenau, the sparkling Saumur from Langlois-Château and any one of a dozen rosés from Anjou. And, of course, there is the food. Rabelais called the Loire Valley the garden of France, and Curnonsky, the Prince of Gastronomes, who was born in the Anjou, rated the local cooking above all others. And then there are the great châteaux—Chambord with its 440 rooms and 365 chimneys, Blois, Chenonceau, Azay-le-Rideau…but enough, except for one small indulgence s’il vous plait: a few words about Quincy, the village and the wine.

Quincy, the village, is about 30 miles southwest of Sancerre, between Bourges and Valençay, but still part of the Sancerre appellation, which means its wine must be made from sauvignon blanc. There are better Sancerres, but not many; the Quincy producers are not as prone to overproduction as some others. It’s good honest sauvignon, honestly priced, from what appears to be a good honest town. And, strangely enough, there seems to be plenty of it to go around. To get a feel for the place, and the wine, there is a pleasant little restaurant near the Gare de Lyon in Paris called Le Quincy. A bit stagey, perhaps, but fun. Not the old Allard, alas, but then what is?

Originally published in the May 2009 issue of France Today.