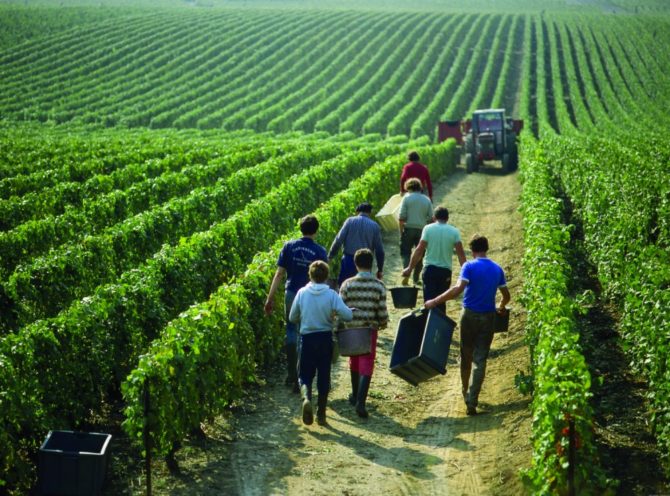 Have you ever had a glass of Champagne? I mean a real glass of Champagne? One bursting with savoury and sweet delicacies – a glass which is so structured, complex and ‘grown-up’ that it makes everything else taste like a fizzy drink? No? Then you must… When we speak of a Champagne ‘grower’, we are referring to those who raise their own grapes, then vinify and label wine themselves.

This is in stark contrast to a ‘Champagne house’, which is a Grande Marque belonging to the Union des Maisons de Champagne (UMC). All of its members must adhere to strict quality controls as well as international sales quotas, in order to remain so. They have always bought the best grapes from various growers, and then made the wine themselves, under their brand. They are always blends, as opposed to single-vineyard or even single-village wines. With the major Champagne houses, the grapes in a declared ‘vintage’ are blended but all from the same year. However, these huge brands make most of their money from non-vintage wines (NV), those blended from many growers and several different years, according to the ‘house style’.

There was a very good reason for establishing this system: Champagne’s mercurial growing season and the wine’s tricky, unpredictable fermentation process. After the supposed 1693 ‘invention’ of Champagne by the cellarer to the abbey of Hautvillers, one Dom Pérignon, its production rested primarily in the hands of aristocratic growers and monasteries. Dom Pérignon systemised and refined the making of the already famous local red wine, aiming for a very pale product from the best black grapes, Pinot Noir. He succeeded in making a white wine which could age and improve – but then again, so had the Romans. At that time, bubbles were a sign of incompetent wine-making. Champagne’s producers did learn how to make the fizz, but not how to control the process. And when this ‘mistake’ actually became popular, it was certainly a major issue.

Each year was a gamble – sometimes the wine failed to fizz, other times the second fermentation was so fast that most of the bottles burst. After the Napoleonic Wars, the maisons replaced the monasteries and became sort of ‘control centres’ of Champagne production. These large companies had the financial stability to weather the inconsistencies of the production process and – more importantly – to then market, distribute and export the wines. Essentially, the small growers simply existed to feed grapes to the maisons. They were unknown, uncelebrated cogs in the massive international Champagne trade. But no longer…

For generations, Champagne’s growers dedicated themselves to creating fine wines which speak of their terroir, only to sell them to the maisons, who then dilute their efforts. Slowly, as economic conditions have permitted, the growers started producing their own-label wine, rather than selling. When there was a glut of Champagne on the market and the prices of their grapes fell, this seemed a great idea – they made more money by not selling to the maisons.

In 1904, Le Syndicat General des Vignerons de la Champagne (SGV) was established and, more recently, 2001 saw Les Champagnes de Vignerons (LCV) introduced to promote the growers’ image. ‘Grower Champagnes’ are now successful – the world’s wine-lovers have acquired a taste for the ‘real stuff’. However, harvests have been hit by harsh weather, yields are down and grape prices are up. Consequently, the growers are tempted to sell again, rather than face small margins for their quality, low-yield product as they compete against the cut-price brands. This temptation may prove too strong for some, let’s hope not.

If you need convincing, try Henri Mandois’ Brut Nature. With zero dosage and a minimum four years of ageing, it possesses a fresh, salty nose, solid extracts and a dry, crisp fruitiness. Or his Cuvée Victor 2002 from specially selected plots, it is a petit dejeuner in a glass. Then there is Alexandre Penet’s Cuvée Extra Brut 2008. Mandois uses mostly Pinots and it is meaty, corpulent and very sophisticated. A Bergere’s Blanc de Blancs Grand Cru has a higher dosage but is still balanced and fresh, with Chardonnay notes of citrus and brioche, mint and white flowers.

And then there is Ariston Aspasie with his Rosé – a unique and truly stunning bouquet of fossils, sandy soil and almonds. The nose, which just keeps opening and evolving, envelopes you in a wave of minerality. His Vintage 2006 is perfection.

So the next time you raise a glass, make it a real one.

There are many different combinations in which Champagne grapes can be grown and vinified. Here are the explanations of the label terms.

Négociant-Manipulant (NM): We see this on the label of the large Champagne houses or merchants who source their grapes from a wide variety (as much as 80 growers) and then vinify under their brand.

Coopérative-Manipulant (CM): When a group of small growers blend their grapes collectively and make a wine under one or more brands. They are usually involved in the wine-making too.

Sociéte des Récoltants (SR): When a small number of growers get together and share the same winery but make their own labels. This designation differs from a Coopérative-Manipulant because the growers keep their grapes separate, make their own brand, and are directly involved in the winemaking process.

Récoltant-Coopérateur (RC): This is when a grower provides grapes to a Coopérative- Manipulant and they make the wine on the grower’s behalf, under the grower’s own brand but without their involvement.

Récoltant-Manipulant (RM): This is a Champagne which is both grown and made by the same producer.

Champagne Tasting Events: How and where to sample the best of the region

At the end of each April, the Champagne growers host tastings around their region. Here are the sites with all the information on these superb events: www.terroirs-et-talents-de-champagne.fr; www.terresetvinsdechampagne.com; www.lesartisansduchampagne.com

When organising a trip to Champagne, contact Jiles Halling, who has dedicated himself to supporting small growers. He specialises in “grower Champagnes”, private tours and tastings.