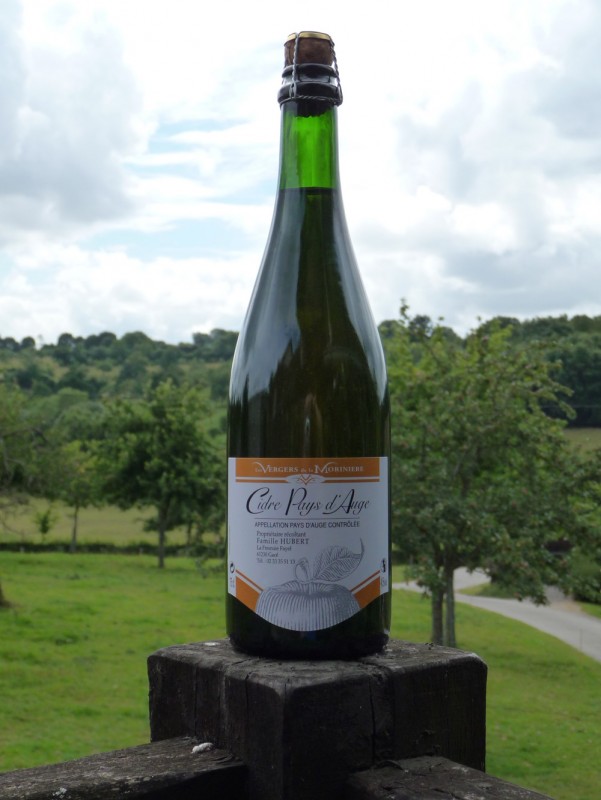 The French have never met a fruit they couldn’t ferment, so the saying goes, and in the pantheon of fermented fruits the apple is second only to the revered grape. In Normandy, the cloud-dappled apple orchard of France, there are three main beverages made from fermented apple juice: pommeau, an ultra-sweet, high-alcohol aperitif; Calvados, the Norman brandy; and cider. Of the three, cider—with an alcohol content similar to beer, ranging from 3 to 7 percent—stands out as a versatile, exceptionally drinkable beverage, perfectly adapted to many foods.

Unlike the pasteurized, super-sweet version familiar to Americans, French cider is slightly effervescent, with varying ranges of sweetness, and comes in glass bottles, like beer or wine. In its highest form—still a rarity, even in France—cider can rival wine in subtlety and complexity. And like good wine, the best artisanal ciders are meticulously crafted to give fullest expression to the intrinsic qualities of the fruit.

While cider has been around as long as wine, it has yet to receive the recognition—or enjoy the prestige—it deserves. Even the French still consider it a drink to quaff from quaint earthenware cups when enjoying the occasional savory crêpe. That’s a perception that’s not going to change overnight, says Michel Hubert, a fifth-generation Calvados and cider-maker in the AOC land of Normandy’s Pays d’Auge. “When French people drink cider they drink cidre brut,” says Hubert, meaning the bone-dry version ubiquitous in France. “That’s because the word brut makes them think of champagne, which is an association that ultimately limits their choice and therefore their understanding of the drink.”

To Hubert, and to his colleague Eric Bordelet and other more ambitious cider makers, this is a shame, as artisanal ciders pair wonderfully with food and are variable in sweetness: from an ethereal, delicately floral elixir to an earthy beverage redolent of the barnyard.

Hubert’s family was distilling apple juice from their orchards to make Calvados long before the Revolution, yet they are relative newcomers to cider, having produced it only since the 1980s. This is mainly because of vastly improved techniques since the times when Norman and Breton farmers pressed the fruit between successive layers of straw to produce cidre fermier, a rustic beverage made mostly for immediate family consumption. Before the advent of stainless steel, cider-making was a highly unstable affair—the high sugar content in the fruit makes the juice prone to oxidation, almost immediate fermentation and spoilage. But with stainless steel vats the procedure became scrupulously hygienic, allowing cider a much greater stability and shelf life.

Because artisanal ciders are never pasteurized, a process that severely limits the character of the juice, controlling the conditions from start to finish is crucial. After pressing, the juice undergoes a threefold process to control fermentation—refrigeration, the addition of a small amount of sulphur dioxide, and filtration—before it is blended and bottled.

Hubert was president of the group that finally won AOC status (appellation d’origine contrôlée) for cider in 1996, and he produced one of the first AOC ciders in the country, under a strict set of guidelines that serve as quality control for many cherished French products, including wines and cheeses. An AOC cider must meet three criteria: no added water in any step of production; no more than 15 percent of acidic apples, and no added carbon dioxide. While the AOC designation may assure a certain quality, any good cider-maker will tell you that, like wine, cider’s character has more to do with the apples themselves, which in turn have everything to do with terroir.

All of windswept Normandy has much the same above-ground conditions, but underground it’s quite another story. “The soil changes literally from parcel to parcel,” says Hubert, “one five-acre piece of land may yield fruit with an entirely different character than the five-acre parcel just down the road.” This phenomenon is key when speaking of any decent wine in France, and it is no less important to cider makers.

While Hubert seems to be at peace with the relatively modest stature and prestige of artisanal ciders, not so Eric Bordelet. Rugged, taciturn and doggedly

devoted to his craft, Bordelet has more the demeanor of a renegade than an aesthete. This is perhaps fitting, as Bordelet’s self-imposed task is to single-handedly revolutionize the making, and perception, of cider. But he has a pedigree—between 1986 and 1991 he was a well-known entity in the rarified world of wine, as sommelier at the three-star restaurant Arpège in Paris. While there he sought out unusual, lesser-known wines, often tasting 20 different examples at a sitting to find the best pairing for a single dish.

He brings the same perfectionism to his cider, or more precisely “apple wine”, as the production has more in common with winemaking than one might think. In fact, when Bordelet decided to leave Paris to tend to the family orchards in Normandy, he first studied oenology in Burgundy to learn the winemaking process from start to finish. It was a long road from cider to Sydre Argelette, his reserve cuvée, named for the unique terroir, a rocky mix of granite and schist that gives the apples their individual flavor. In his first year of cider-making, he says, he produced possibly 500 drinkable bottles; now, some 20 years later, he

produces 85,000 annually for distribution in France and for worldwide export. According to Bordelet it took ten years of trial and error to arrive at the right recipes, which must continuously evolve depending on conditions each year.

Mastering the art was a complex endeavor, “inextricably linked with the personality of the cider-maker,” he says. It is also linked to the characteristics of the apples. To create his four “gastronomic” ciders, Bordelet combines at least 20 heirloom apple varieties exclusively from ancient, low-yield trees that produce four categories of juice: sweet, bittersweet, bitter and acid. Each category provides a different quality: bitter for body, sweet for volume and acid for balance. Bordelet’s highest priority when blending is to respect the character of the fruit, which is hand picked and painstakingly processed over many months. From the small, unlovely and mostly inedible apples gathered from 200- to 300-year-old trees he makes ciders of exceptional character and refinement.

The magnificent Sydre Argelette is elegant and crisp, with intense apple flavors, a delicate mousse and a lingering floral sweetness. This low-alcohol cider could easily replace Champagne for a festive meal, as it pairs beautifully with food and, like a vintage Champagne, can be cellared anywhere from two to ten years or more. For those who prefer a more pronounced sweetness the Cidre Brut Tendre will enhance any meal under the sun as well as many cheeses, and the delectable Cidre Doux—enjoyed by President Obama in Chicago, says Bourdelet—is perfect on its own or with dessert.

Bordelet also makes a pear cider that may actually be the crowning glory of his efforts. The pale, straw-colored Poiré Granite first imparts the luscious essence of ripe pears. Dry, minerally and intensely aromatic, this softly effervescent beverage contains 15 varieties of small, hard pears from the domaine‘s 300-year-old trees.

Bordelet has worked hard to counter the prevailing notions of cider, an uphill battle in a country where wine is king and snobbery rampant. He’s clearly making inroads, as his ciders can be found in a dozen countries, including the US. But in the end, it’s not Bordelet who will do the convincing. The cider speaks very eloquently for itself.