Time with Wine: Malbec on the Rise in France 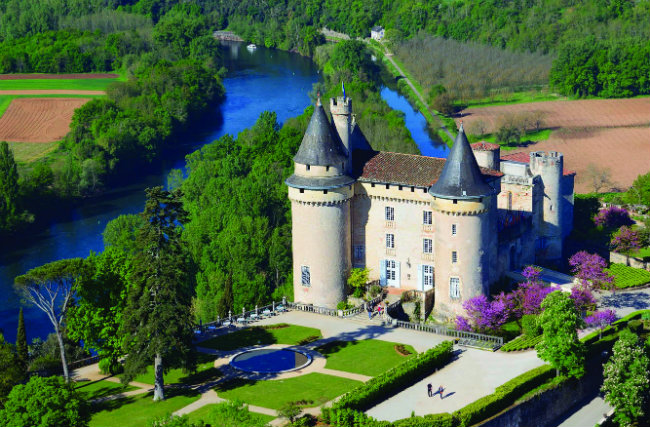 The view from the terrace of Château de Mercuès is impressive enough, but the hotel’s charming General Manager, Yann Potet, insists we follow him to ever higher vantage points. Sure enough, up amongst the turrets and crenelated roofs they have created a terrace from which, if you were a 13th century feudal lord, you could have surveyed your enemies across the plains of the River Lot. Today, the outlook is a lot friendlier: far below on the ribbon of emerald river, pleasure boats are navigating the locks and cyclists are meandering along sleepy lanes. Yann points out the château vineyards where the cultivation of the Malbec vines has seen a renaissance under the stewardship of wine maker George Vigouroux.

There is great pride and determination in the way this domaine has been rescued and brought back to life. Take for example the location of the chai (the cellar or storage area). Not content with his wine being made and stored in an anonymous building down in the valley, Vigouroux has dug down into solid rock and constructed a state-of-the-art winery directly in front of the château and underneath the ornamental pond, lawns and rose gardens where guests sip aperitifs. The only clue from above is a glazed, atrium-type window which is rolled back to allow the fruits of the vendange to be unloaded straight into the hoppers. The facility houses 250 barrels and can produce 200,000 bottles per annum.

Although Vigouroux and his winemakers tour the world looking for the latest techniques and ideas, it was closer to home, from Bordeaux, where they got the idea of planting higher densities of vine per hectare. The typical density around Cahors is 5,000 vines per hectare, but in the esteemed vineyards of the Médoc densities are higher, often 6,000 to over 8,000. Opting for the popular 6,666 vines per hectare they knew that, if successful, the new planting strategy would encourage the roots of the vines to reach deeper into the local clay, limestone and gravelly soils, thereby creating higher quality fruit. The end result was a success and a new legend was born, the Château de Mercuès ‘6666’, a wine which I was to taste later. 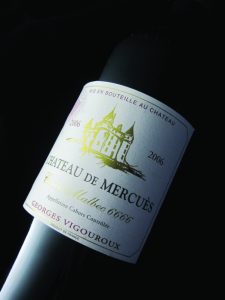 Vigoroux and his team are proud of their investments and innovations, their medals and scores (they received 93 points from Wine Enthusiast for the 6666). And they are about to sit me down in front of talented chef Julien Poisot’s gastronomic creations and allow me to sample their wine. So what’s not to like? Why should I have any niggling reservations? Well, because it’s Malbec. I don’t like Malbec. When I think of Malbec I think of the legendary ‘black’ wines of Cahors, beloved by Roman Emperors and Russian Tsars – big, unsubtle, inky mouthfuls of alcohol. I think of mass-produced Argentinian wine with too much oak, fruit and spice – like drinking liquid Christmas cake. And yet people are drinking more of it. Friends come for dinner and bring bottles of Malbec. Am I missing something? What I’ve tried I’m not keen on. I have a bad case of Malbec prejudice. After all, the Bordelaise winemakers pretty much abandoned it back in the 1950s in favour of the more vigorous Cabernet Sauvignon and Merlot, so how come anyone in France persists? Who is betting on its future?

Oops, looks like I got it wrong again. Recently predicting 12 major trends for the future of wine, none other than Robert Parker said Malbec will be big and “by 2015 this long-ignored grape’s place in the pantheon of noble wines will be guaranteed.” You can see I’m no expert.

But that still leaves the rather important question of personal taste. We don’t have to like all types of wine, even if they are from prestigious châteaux. But now it’s dinner time in the delightful dining room of Château de Mercuès. The chef is doing his best to tickle our palates and a glass of Chenin Blanc (also produced here) with the entrées has fluffed up the appetite for the main attraction, a 2010 Château de Mercuès Cuvée Malbec 6666 – a devilish number if you ask me. So, what’s it like? Well, it certainly has the characteristic strength of Malbec but even after 18 months aging in barrels it’s not over-powering. Cahors is a long way from Argentina, and this elegant wine made from the Auxerrois grape (the local name for Malbec) is also a million miles away in terms of taste and bouquet compared to the South American offerings. It’s actually very subtle and complex, in fact it’s devilishly difficult to pin down. Chocolate, liquorice, blackberry, blackcurrant – take your pick. It’s dark but not black, more purple-plum, and also silky and velvety. It’s very easy to drink. OK, I give in. I like it. By the second glass I love it. It’s a revelation; overcoming prejudice has never been so pleasant.

Previous Article A Perfect Picnic in Nice
Next Article My Life in Paris: Lost in Translation