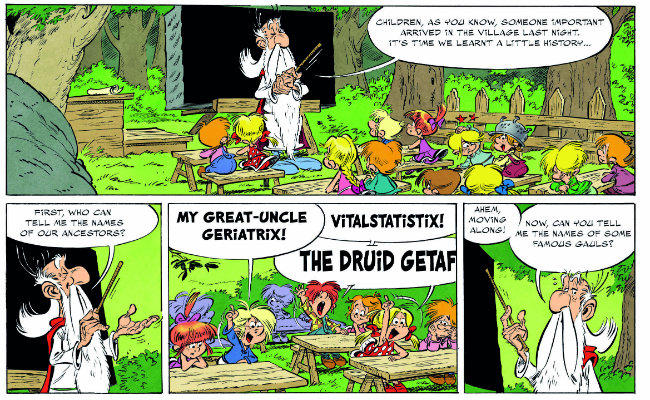 Ahead of Astérix the Gaul’s 60th anniversary, we take a peek at what’s in store for fans on this diamond jubilee year

“Gaul is entirely occupied by the Romans. Well not entirely! One small village of indomitable Gauls still holds out against the invaders.” So began Astérix’s almighty showdown with the Roman foe in 1959.

And 60 years on, the indomitable pint-sized hero is still gamely fending off the enemy fuelled by glugs of Getafix’s magic potion, his portly sidekick Obélix in tow. Yep, you’ve read correctly, France’s most beloved comic strip saga is celebrating its diamond jubilee this year.

Now a household name, the Hexagon’s most lucrative export has come a long way since creators René Goscinny and Albert Uderzo dreamt up the moustachioed Gaul with a left hook powerful enough to thwack legionaries right out of their sandals. Sales are into the hundreds of millions and spin-offs include a theme park, TV cartoon and film franchise. And this bumper anniversary promises to be one for the history books with a flurry of exhibitions and celebrations in store, starting with the unveiling of a brand new attraction, “Attention Menhir!” at the Parc Astérix (which is turning 30) in April. The brand new ArtofAsterix Instagram account will treat fans to a treasure trove of never-seen-before illustrations throughout the year – from exclusive drawings and film-adaptation storyboards to sketches of new figurines.

If that wasn’t quite enough, Éditions Albert René will launch the Toutatis e-shoppe, the first official online store for Astérix collectors’ items.

2019 will also see the release of special jubilee editions, tribute books, audiobooks, DVDs, a newly-minted souvenir coin and, drum roll, please… the hotly-anticipated 38th instalment of the Gaul’s face-off with the Roman conqueror on October 24. While publishers are keeping firmly schtum about the upcoming Album No. 38’s top-secret contents– and title! – we’ve secured an exclusive sneak preview of the comic book to tide you over until autumn. We hear whispers there may even be another surprise on the cards, ready for Christmas…

Previous Article Äponem: A Talked-About Gastronomic Destination near Béziers
Next Article The Matisse Chapel in Vence Inspires Hope… and a New Play