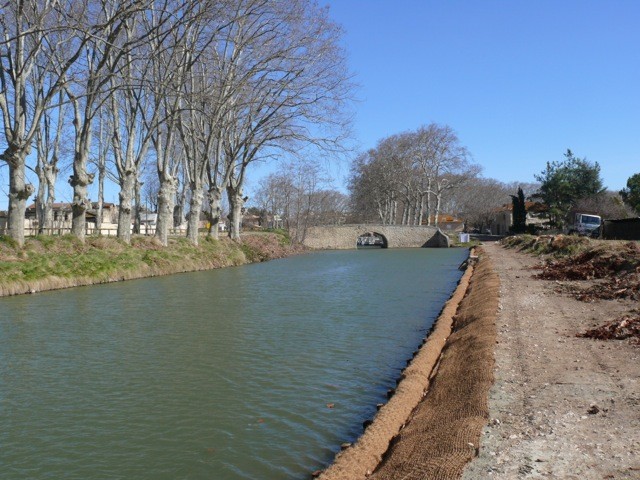 During the winter and spring the Canal du Midi often falls silent, its serenity untroubled by the myriad pleasure craft that ply the ancient waterway during the summer. Mirrored in the placid waters are thousands of trees that have stood like sentinels along the canal’s banks for almost two centuries—poplars and oaks and the occasional umbrella pine, but mostly stately plane trees whose roots strengthen the canal’s banks and whose summer foliage shades canal users from the beating heat of the southern French sun and also slows evaporation from the waterway.

But this year it’s different. Shattering the silence is the savage noise of chainsaws and the ringing of axes. On long sections of the canal, from the shores of the Mediterranean at Sète to the “Pink City” of Toulouse some 150 miles inland, thousands of plane trees are scheduled to be felled, their trunks, branches and roots heaped onto flaming pyres. The felling will leave great gaps in the twin tree line of the canal, giving it the appearance of a giant army drawn up on parade with places left vacant for those killed in action.

That’s an apt comparison because, like fallen soldiers, the felled trees are the victims of a lost combat. They have been vanquished by an implacable assailant that’s been slowly gaining ground in France for decades: ceratocystis fimbriata platani, a microscopic fungal infection for which no cure is known. To slow the spread of the disease—commonly known as canker stain—the affected trees must be uprooted, chopped into pieces and burned. Since the disease first appeared on the canal near Carcassonne in 2006, some 900 plane trees have been cut down in an attempt to contain the disease. But such is the virulence of the new blight that despite this cull, French tree specialists fear that all 42,000 of the canal’s plane trees may have to be destroyed over the next fifteen years—a massive operation that will not only cost the country around $260 million but possibly cost the canal its designation as a UNESCO world heritage site, an honor it has held since 1996.

If that wholesale destruction comes to pass it will be a sad outcome for one of Europe’s oldest manmade waterways—a canal described by UNESCO as “one of the most remarkable feats of civil engineering in modern times” and one which helped usher in the “flowering of technology” that was the Industrial Revolution. Built between 1667 and 1681, during the reign of Louis XIV, the canal was the brainchild of one of the Sun King’s salt tax collectors, Pierre-Paul Riquet, who recognized the potential of a waterway that would allow passage between the Mediterranean and the Atlantic without the costs and risks of sailing around the Iberian coast and through the pirate-infested Straits of Gibraltar. Others, including Renaissance polymath Leonardo da Vinci, had wrestled with the engineering problems inherent in such a venture, but it was Riquet who came up with a solution for supplying the higher reaches of the canal with the vast amounts of water needed to keep the waterway full and the locks working. This he did by bringing water from the Massif Central’s Montagne Noire, far to the north, and storing it behind a massive dam—Europe’s second largest at the time—to create the Bassin de Saint Ferréol from which the canal is fed.

As well as the canal itself and its 91 locks, Riquet’s feat required the construction of three aqueducts (subsequently increased by fort builder Sébastien Le Prestre de Vauban to more than 40), 126 bridges and the world’s first-ever canal tunnel. Poor Riquet was nearly bankrupted by the financial demands of construction, and he did not live to see his canal’s completion. But long afterward, the final result was a triumph, linking Riquet’s Canal du Midi (known until the French Revolution as the Canal Royal de Languedoc) with the Canal de Garonne north of Toulouse, allowing traffic to move both ways between the Mediterranean and the busy Atlantic seaport of Bordeaux.

Later centuries would see the canal eclipsed by road and rail links; by the 1980s it had ceased to be a working waterway. The drought of 1989, when the canal was closed, served as the coup de grâce for commercial operations. But it gained a second lease on life as a popular vacation destination for those seeking escape from the helterskelter of modern life, barging on its quiet waters, or by boat owners seeking a shortcut between Mediterranean and Atlantic waters. Alas, this new lease on life may also have carried with it the seeds—or rather the spores—of destruction. Officials at Voies Navigables de France (VNF), the canal authority, postulate that pleasure boats tying up to trees along the canal, or even scraping the root systems that protrude from the canal’s banks, may have helped spread the deadly fungus by damaging the trees and exposing them to waterborne infection. Says VNF spokesman Jacques Noisette: “the fact that canal boats can transmit the disease means it can spread both upstream and downstream.”

But if boats and barges on the canal have helped to spread the malady, the origins of ceratocystis fimbriata platani lie elsewhere, and the main suspect is the United States. When Thomas Jefferson declared back in 1787 that of all the methods of traveling he had experienced, voyaging on the Canal du Midi was the most pleasant, little did he know that his country might be responsible for the waterway’s greatest existentialist threat. French tree experts now believe that the fungus was first introduced into France via wooden ammunition boxes used by US troops in World War II. These ammo boxes, it is thought, were made of infected wood from American sycamores (platanus occidentalis), a relative of the canal’s plane trees (platanus acerifolia), and arrived with the troops that landed in the south of France during the closing stages of the war.

At the VNF offices in Toulouse sorrow at the loss of their beloved plane trees has given way to a sense of resignation. The trees were never going to live forever says the VNF’s Noisette, who points out that most of the planes, planted in the 1830s, are entering old age simultaneously and that the problem of replacing them would have arisen with or without the disease. But there’s a determination to ensure that the canal’s problem does not exacerbate the danger facing plane trees throughout southern France where, according to Noisette, some 80,000 trees have been affected. Above all there’s a commitment to replacing the felled trees with resistant hybrids, along with other shade trees such as ash and linden, so that future generations can enjoy the Canal du Midi in all its arborial splendor. “The canal will remain a magnificent part of our heritage,” insists Noisette.

That’s good to know, but for the moment it’s fairly sure that, as the culling accelerates, the appearance of the Canal will change dramatically. Even with faster-growing replacements, it will take several generations for the new trees to reach the size and grandeur of those being downed. So if you haven’t yet visited France’s most glorious canal, now is the time to go.