Top 10 Things to Do in Nantes 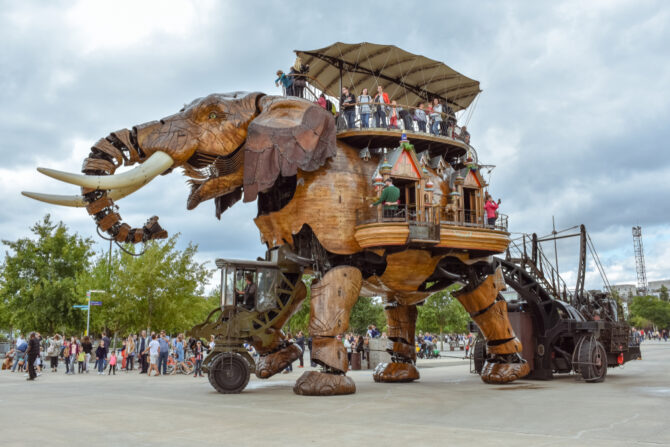 Which other French city has a gigantic mechanical elephant, a medieval château, and a banana warehouse turned nightlife hub?! If you’re visiting Nantes for the France Rugby World Cup 2023, why not plan a few days before or after match day to take in the highlights of this Loire River city? To get you started, here’s our pick of the top 10 things to do in Nantes.

Inspired by the fantastical worlds of Jules Verne (the Nantes-born author of Around the World in 80 Days and Twenty Thousand Leagues Under the Sea), the mechanical sketches of Leonardo da Vinci, and Nantes’ industrial history, ‘Les Machines de l’Îles’ (The Island Machines) is unlike anything you’ve ever seen before.

2. Walk the Ramparts at the Château des Ducs de Bretagne

Nantes’ medieval castle stands as a reminder that this Loire-Atlantique city was once the capital of neighbouring Brittany (Bretagne)—and home to the Dukes of Brittany. Today, the remarkably preserved fortress crowns the Old Town and affords views over the surrounding city.

Best of all, while there’s a fee to visit the history museum inside the castle, you can stroll through the central courtyard and climb up to the ramparts for free. Follow the ramparts all the way around the castle, then head down to the castle gardens to stretch out on the grass by the moat.

3. Browse the Boutiques in the Passage Pommeraye

Hidden away in the heart of Nantes’ Graslin district is the elegant 1840s shopping arcade Passage Pommeraye. It’s an impressive sight, with its grand neoclassical columns and monumental staircase, and home to a number of luxury boutiques.

Pick up kouignettes (sweet pastry swirls in a variety of flavours), a local speciality, from Maison de Larnicol on the ground floor, then climb the steps and exit near Rue Crébillon, one of the city’s most luxurious shopping streets. From here, head east to Place Royale with its ornate fountain, or west to Place Graslin, where you’ll find another architectural gem, the art nouveau café-restaurants La Cigale.

Every French city needs a covered food market, and Nantes’ largest is the Marché de Talensac, just a short walk north of the castle. Housed in a historic 1930s market hall, it’s home to around 160 stalls selling fresh fruits and vegetables, cheeses and charcuterie, meat and fish, and regional delicacies.

This is the place to pick up local specialities such as Atlantic oysters and mussels, Curé Nantais cheese, and rum and almond-flavoured cakes, Gâteau Nantais. Don’t forget to purchase a bottle or two of local Muscadet to go along with it. The market is open daily except Mondays from 8am until 1pm, or 1.30pm on weekends.

Located in the old dockyards and hangars of the Île de Nantes, the Hangar à Bananes (Banana Warehouse) is now one of Nantes’ coolest nightlife haunts. These 20th-century warehouses, stretching 150 meters along the waterfront, were once used to stock bananas arriving from Guadeloupe and Guinea—now they house more than a dozen different bars, restaurants, galleries, and entertainment venues.

Come in the evening hours, when bars set out deckchairs along the Quai des Antilles, and you can sip cocktails as you watch the sunset along the Loire. Stick around after dark, when the ‘Anneaux de Buren’, a series of gigantic multi-coloured LED rings, light up the riverfront, and hop between bars and nightclubs into the early hours.

6. Enjoy a Cruise Along the Erdre

Nantes is a city of two rivers—the Loire, which flows through the heart of the city, and the Erdre, which runs north to the north. A short tram ride from the centre-ville, Versailles Island (Ile de Versailles) is the highlight of the Erdre, and its idyllic Japanese garden is a popular picnic spot.

Better yet, rent an electric boat, paddleboard, or canoe from Floating Nantes and set sail along the river. Boats can even be rented for the whole day, so you could pack a picnic and a bottle of wine, and spend a day exploring the tree-lined waters.

7. Picnic in the Jardin des Plantes

Another popular picnic spot is the Jardin des Plantes, one of Nantes’ largest green spaces. A short stroll from the château, the botanical garden is as eclectic as you might expect from this art-loving city. There’s a gigantic Alice in Wonderland-esque park bench to pose beneath, a series of animal-shaped bushes to marvel at, and colourful art installations dotted throughout.

Wander around the ponds and fountains, watch the ducks on the lake, then enjoy a coffee at the terrace café.

8. Hang Out in the Old Town

Nantes’ compact centre is easily explored on foot, and the most atmospheric part of the city is the medieval Old Town. After walking the château ramparts, continue north to admire the Saint-Pierre Cathedral, one of the city’s most emblematic landmarks. The surrounding Bouffay quarter is a warren of cobbled lanes, dotted with half-timbered buildings, and crammed with bars, restaurants, cafés, and shops.

The Galeries Lafayette department store takes pride of place along Rue de la Marne, while the Cours de 50 Otages runs all the way up to the Tour Bretagne, Nantes tallest building.

9. Get Your Culture Fix at a Museum

Nantes Fine Arts Museum (Musée des Beaux-Arts) was founded by Napoleon in 1801 and remains the city’s go-to spot for fine art—Tintoretto, Rubens, Monet, and Chagall are all on display here. Another museum to indulge your creativity is the Jules Verne Museum, devoted to the wildly imaginative works of Nantes’ most famous export (and the inspiration behind the Machines des Îles).

If you prefer open-air exhibitions, you don’t have to wander far in Nantes to stumble across street art installations. The annual Voyage á Nantes festival hosts exhibits throughout the city for a month each summer, but there’s also a year-round 20km trail that leads you to the city’s most photo-worthy spots. Don’t worry about getting lost either—a green line is painted on the ground showing you the way!

If you’ve ever visited a French supermarket, you’ll certainly have come across LU and BN biscuits, but did you know that the iconic biccies hail from Nantes (BN stands for Biscuit Nantes)? The original biscuit factory, the LU tower, dates back to 1848, and it’s one of the city’s most memorable landmarks, with its ornate, gold and blue-domed tower.

Today, the LU Tower is home to a popular bar, restaurants, and concert venue, Le Lieu Unique, as well as a small museum devoted to the history of the city’s beloved biscuits. Take a trip to the top of the tower for a view over the city.

Previous Article Restaurant Review: Aux Lyonnais, Paris
Next Article Win a Week in the Dordogne Valley for Two Worth €480