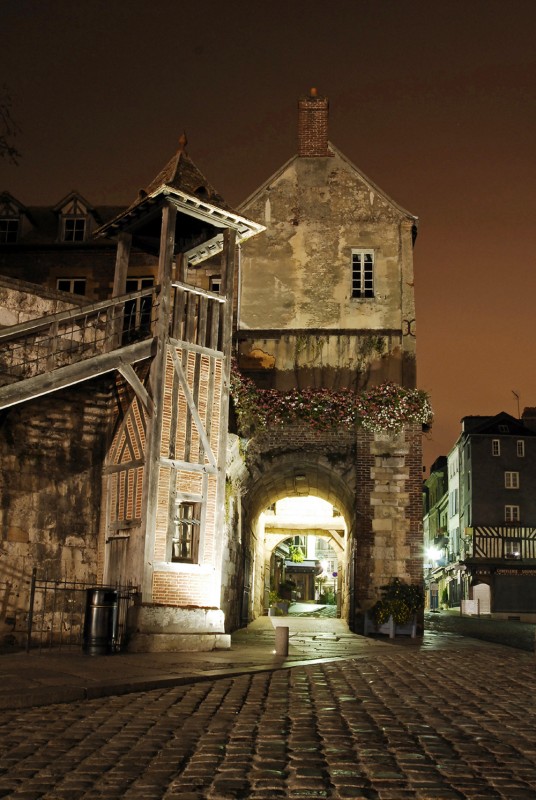 Among the many splendors of the Normandy coast, Honfleur is in a league of its own. As enchanting as the Impressionist paintings it often inspired, the postcard-sized port town offers history, culture, ambiance and savoir vivre in one uniquely well-preserved and accessible package. Just two hours from Paris by car or train, visitors could be forgiven for thinking they’d been transported centuries back in time. Stand at the edge of the surprisingly—and deceptively—small-scale Vieux Bassin, as local residents call the old port, and it’s not hard to imagine Champlain’s ship hoisting its sails and heading for the New World.

In fact, Honfleur today is both a river port and a seaport, its modern facilities deep enough to accommodate major cruise ships. But if the boats now moored along the quays of the Vieux Bassin are mostly leisure craft, along with the odd fishing boat, long ago Honfleur’s military fleet was the pride of France. At the mouth of the Seine estuary, the town was ideally positioned to deter the invading English and other marauders from reaching larger towns—like Rouen and Paris—upriver. At the very tip of the Vieux Bassin, La Lieutenance, the splendid residence of the king’s lieutenant, the governor of Honfleur, is built over the town’s original 11th-century fortifications, helping to conjure the atmosphere of the once-strategic port.

Over centuries of maritime conflict, Honfleur’s shipyards became some of the best in France; well stocked and manned with experienced sailors, fishermen and shipbuilders. In times of peace, Honfleur naturally turned its sights—and expertise—toward exploration and commerce. Early 17th-century explorer Samuel de Champlain made good use of its resources as the starting point for his expeditions to the coast of North America, where he founded Quebec in 1608 and discovered the lake now named for him on the border of Vermont and New York.

Local shipbuilders also brought their skills to bear in the town’s most famous structure, the church of Sainte Catherine, whose oak ceiling resembles the hull of an overturned ship. Built between 1460 and 1496, it is the oldest and largest wooden church in France. Oddly enough, the church belfry resides not on the roof but across the way in a massive wood-and-stone building, possibly because of the substantial weight of its bronze bells. The pretty cobbled square surrounding the church is still very much the heart of town, and a good starting point for a walking tour-the only way to explore Honfleur.

A wander through the narrow cobbled streets allows a close-up view of the many architectural styles happily jumbled together, with buildings dating from the 14th to the 19th centuries: half-timbered fisherman’s dwellings spruced up with a coat of sky blue or raspberry-colored paint, elegant manor houses, tall slate-roofed town houses crowding the harbor, some barely eight feet wide. Many are artfully ornamented with peculiar carved chimeras, expressive statues of saints or, in the case of l’homme de bois, a wooden statuette honoring a slave who rescued his master from drowning.

A steep but rewarding walk up Rue Charrière de Grâce, which traverses the escarpment of the Plateau de Grâce, leads to the lovely Notre Dame de Grâce chapel, a mariner’s sanctuary dating back to 1600. Seafarers seeking divine protection for a perilous journey might offer up a model ship as an ex-voto upon safe return, and many fine examples of the miniature vessels hang from the church’s wooden beams, all awash in the sparkling light of marine-themed stained glass windows.

A short walk past historic stately homes (one of which housed the fleeing King Louis-Philippe) ends in a dramatic view of the town, the estuary and the spectacular cable-stayed bridge, the Pont de Normandie, an engineering triumph completed in 1995. Although somewhat marred by industrial Le Havre across the estuary, the view of Honfleur’s streets and spires set out before you is magnificent.

If he was not the most famous artist to immortalize Honfleur, Eugène Boudin—born here in 1824—was certainly the most enthusiastic. One of the first advocates of painting en plein air, Boudin encouraged the young Monet to come here and set up his easel outdoors. He also gathered a group of landscape artists around him, all of whom stayed at a little thatched farmhouse inn called the Saint Siméon, now Honfleur’s most luxurious hotel.

The list of painters who worked in Honfleur reads like a who’s who of 19th-century art: Corot, Turner, Courbet, Millet, Seurat, Jongkind. It’s no coincidence that many of them were Impressionists or precursors of the movement, attracted by the changing light and pearly luminescence of the seacoast and the Seine. The Boudin Museum, which houses many of the painter’s best works, along with his personal collection, makes for a pleasant hour or two viewing the town through the eyes of great artists.

Boudin wasn’t the only cultural figure with ties to Honfleur. Toward the end of his life the poet Charles Baudelaire said he’d finally found peace there, at the home of his beloved mother, where he wrote his Invitation au Voyage. It was also the birthplace of composer Erik Satie, who is honored by his own quirky museum. But for the most part, it was the painters who flocked to Honfleur and, apparently, never really left, as evidenced by the astonishing number of art galleries around town—some 80 all told.

For all its historical cachet, Honfleur is a vibrant, lived-in town. Not merely a relic to past glories, but a bustling port where fishermen still bring in the daily catch and old women lean from their windows to share the latest gossip. Witness the colorful Saturday morning market overflowing with the many bounties of the Norman countryside and coast: pungent artisan cheeses, creamy farm-fresh butter, herb-infused sea salt, crevettes grises—the tiny grey shrimp that are a local delicacy—and everything apple, from cider and pommeau (a sweet mix of apple juice and apple brandy) to the potent Calvados.

Likely to be found among the Saturday morning marketers are an inordinate number of talented chefs. Honfleur boasts two Michelin-starred restaurants and scores of worthy contenders. The buzz right now is squarely focused on Sa.Qua.Na., whose chef and owner, 38-year-old Alexandre Bourdas, has so electrified the critics—he earned his Michelin star only nine months after opening—that dinner reservations without two-month’s notice are a fantasy, and that’s in the off season. A close scrutiny of the diners in this spare, elegant dining room reveals all the telltale signs of an invading hoard of Parisians, for whom Honfleur has always been a favorite weekend retreat.

Honfleur’s other Michelin-starred restaurant, La Terrasse et l’Assiette, offers innovative takes on classics like foie gras, and specialties from the Normandy coast. The service can be a tad chilly, but the fixed-price menus are bargains, considering the masterful cuisine. The outdoor terrace overlooking the church is a big draw on balmy nights, so reserve in advance.

Across from the Sainte Catherine church, the tiny Bistro des Artistes is crowded with regulars who know exactly what they want. This one-woman show-owner Anne-Marie Carneiro cooks, waits tables and even bakes her own extraordinary bread-serves up the kind of French cuisine travelers dream of stumbling across: fresh, straightforward, inspired.

The low-slung beamed ceiling of the homey and comfortable La Fleur de Sel give it the air of an old fisherman’s cottage—albeit one with a very upscale, imaginative kitchen run by chef Vincent Guyon. With several well-priced menus to choose from, it’s a perennial Honfleur favorite.

If Honfleur’s year-round residents have perfected the art of good living, they’ve also mastered hospitality. There are at least ten top-notch hotels and B&Bs, a half-dozen of which are outstanding. American Penny Vincent and her French husband Thierry, who spent getaway weekends in Honfleur to escape hectic jobs in Paris, went from erstwhile admirers to fully-committed Honfleurais over the span of an afternoon, when they wandered into an elegant 19th-century townhouse and came out owners. Two years later, Penny has become the chatelaine of La Petite Folie, not only one of the prettiest B&Bs in town, but also one of the better values-if you can get a room. With only five guest rooms in the main house—all done up in haute Parisian style—it’s best to plan ahead. Wisely, the Vincents also snapped up the half-timbered captain’s house next door and converted it into three self-service apartments, each more beautiful than the next.

If you must have a spa, the historic Ferme Saint Siméon is an appealing choice. A lovely 10-minute walk from the town center past ancient thatch-roofed houses, the elegant Ferme combines old-world style with modern conveniences. Just as picturesque, but without the wallet strain, is the Manoir du Butin, another five-minute walk beyond Saint Siméon. Atop a sweeping lawn that leads down to Honfleur’s only beach, this typical Norman manor house offers pleasant, discreet service along with ten light-filled rooms and some lovely views to the water.

One of Honfleur’s best-kept secrets, the exquisite Clos de Bourdet excels in homey comforts, along with impressive views of Honfleur and the estuary. Perched on a hill above the town, its four beautifully decorated rooms are both comfy and a relatively good bargain. An ample homemade breakfast or tea in the charming garden confirms the owners’ gift for old-world graciousness.

Combining an old salt warehouse and two 16th-century houses facing Sainte Catherine’s church on its cobbled square, the charming Maisons de Léa is tasteful, cheerful and cozy all at once. For families, there’s a beautiful, fully equipped, half-timbered fisherman’s cottage a few steps from the hotel proper.

At La Maison de Lucie, a few minutes from the center, the lovely enclosed garden courtyard offers shaded café tables among trees and flowers, and the rooms are beautifully done up with lush color schemes and well-chosen antique flourishes. There’s a separate, wood-paneled two-level apartment with beamed ceilings, and a Moroccan-themed mini-spa downstairs in the cellar, should you feel the need for a hot tub.

The delightful Gribouille is Honfleur’s premier purveyor of Norman delicacies: apple juice, handmade jams and creamy confiture de lait, soupe de poisson, patés and scores of other specialties from top local producers. And you can ask for a taste of their scrumptious brandies and liqueurs—Calvados, pommeau, crème de pomme verte and a delectable pear liqueur.

And for a taste of local nightlife, Le Vintage Café jazz and wine bar overlooking the Lieutenancy building and the port is the perfect spot for a glass of wine or a cocktail and a hearty snack. Late hours and good music, often live, make it the social center of Honfleur.