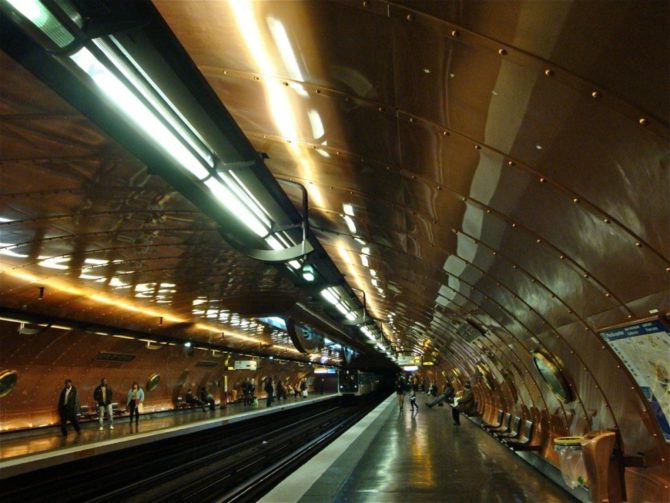 On July 19, 1900, at last, Paris got its Métro—35 years after London’s Underground, 26 years after New York’s subway. The cutting-edge Sprague electric trains of Paris’s Line 1 were composed of three wooden carriages each, and ran between Porte Maillot and Porte de Vincennes. The wooden carriages were gradually replaced by metal after 84 passengers perished in a 1903 fire in the Couronnes station.

Above ground, the 19th century held on until January 1913, when the last horsedrawn omnibuses were withdrawn from the Grands Boulevards route of the Madeleine-Bastille line. Not unlike present-day London, pushed to fix its failing transport infrastructure by the impending 2012 Olympic Games, Belle Epoque Paris was jolted into action by the World’s Fair of 1900 and the Olympics—the Games of the II Olympiad—held mostly in Vincennes that same year.

Architect Hector Guimard’s Art Nouveau entrances for the new Métro were admired by the crowds and marked by officialdom with a special postage stamp. Guimard’s most iconic portal, now at Montmartre’s Abbesses station, didn’t start out there—Montmartre didn’t have a Métro stop until 1912, by which time Art Nouveau was dead and Guimard all but forgotten. His superb iron-and-glass canopy was moved to Montmartre from the Hôtel de Ville station in the 1970s. Those he had designed for Etoile and Bastille were demolished, and the one now standing at Châtelet/Place Sainte Opportune is a replica made in 2000.

Guimard won the commission only because the city council and the Métro company—the Compagnie du Chemin de Fer Métropolitain de Paris—were at loggerheads and refused each other’s first-choice candidates. The ongoing political wrangling caused the project to drag on for nearly half a century, although it was Paris that had pioneered the idea of a metropolitan rail line, as early as 1853. Among the multitude of ideas put forth, from monorails worthy of Jules Verne to San Francisco-style cable cars, one delirious suggestion involved trains that would run in elevated tubes drilled through apartment buildings, keeping Baron Haussmann’s broad new avenues clear. There were no underground projects envisaged in the early days, since the trains were to run on steam.

It remains a mystery why Haussmann did not integrate a transport project into his grand plan for Paris. Did he fail to anticipate the growing traffic in the foreseeable future? That was certainly the case later, when the Métro was finally built. With a view toward keeping outer-rim riffraff out of the city, the new underground network was restricted to Paris proper. Tunnels were made too small to accommodate regular railroad trains, and right-hand drive was established in the Métro, in contrast to the left-hand railroad drive that then prevailed across France, modeled on the British system.

Of all the senseless incidents that accompanied the Métro project, the most astonishing one erupted in 1908, from the most unexpected quarters. The bone of contention was the route chosen for Line 4, meant to link the Montparnasse railway station and the central food markets of Les Halles. The venerable members of the Académie Française—les Immortels— objected to the Métro running beneath their splendid domed headquarters, the Institut de France on the Quai Conti. That’s why Line 4 makes an irrational loop east from Saint Germain des Prés to Saint Michel, avoiding the Institut, before crossing under the river, the Ile de la Cité and the river again en route to Châtelet.

Line 4 was the first to run underground beneath the Seine, a marvelous technical feat at the time. The saturated ground between the Saint Michel station and the river had to be frozen while the ground below it was removed, requiring the installation of two refrigeration plants, which were sunk into the river and then gradually towed to their final positions. Unlike the deep tunneling system of the London Underground, the Paris Métro runs close to the surface. The chief of construction, Fulgence Bienvenüe, opted for a “cut-and-cover” method, digging trenches above the water table—a speedier and less costly method but one that turned chunks of Paris into construction sites, with the trenches following the existing road network above ground to a large extent. Tunnel boring machines were used for the construction of the Line 12 section beneath the Seine between Concorde and Assemblée Nationale where, as in London, the trains run in tubes lined with cast iron rings.

By 1935 the entire Métro network was in place, and except for minor extensions—Boulogne, Neuilly, Vincennes—it remained unchanged until the 1998 opening of line 14.

Early on, the Métro was espoused by Parisian writers and poets, and especially by film directors. In Marcel Carné’s Les Portes de la Nuit (1946) the elevated Métro station Barbès-Rochechouart is a star character in its own right, not just a drop curtain depicting smoky, impoverished postwar Paris. The Métro scene in Jean-Pierre Jeunet’s Amélie (2001), supposed to take place in the Abbesses station, was shot in the little known Porte des Lilas-Cinéma station, a disused stop converted into a film set.

The Métro lends itself particularly well to thrillers, from Louis Feuillade’s silent, hairraising Fantômas (1913) to Stanley Donen’s light-hearted Charade (1963), or Roman Polanski’s Hitchcockian Frantic (1988). On May 16, 1937, a real-life Hitchcockian murder was committed on the Métro, the first one recorded. It happened between Porte de Charenton and Porte Dorée, within a lapse of 55 seconds. The victim, an elegant woman in a green dress and white hat, was traveling in an empty first-class carriage and was discovered with a Laguiole knife stuck in her neck. The sensational crime, which made all the headlines, was never resolved. Some 25 years later, in 1962, an anonymous letter confessing to the murder was received by the police, but the killer was never identified.

Today artworks sometimes grace the stations. The Louvre-Rivoli station is filled with copies of the museum’s sculptures. There are murals portraying episodes of the French Revolution at the Bastille, landmarks of the 20th century at Tuileries, literary mementos at Saint Germain des Prés and Jules Verne’s scientific visions at Arts et Métiers, the station adjacent to the Musée National des Arts et Métiers, a marvelous museum of scientific and engineering discoveries.

Music is also promoted by the RATP, the transit authority, although not the freelance variety. Musicians of all genres are auditioned and licensed to perform in allocated spaces. Surprisingly, it seems the chamber musicians draw the largest audiences.

Today the Métro’s fleet of trains serves over 5 million passengers daily, for a total of 1.5 billion annually. There are currently some 130 miles of tracks, but the network is extended farther into the suburbs every few years. Line 14, which opened in 1998, had the first automated system with driverless trains. And automated trains were later introduced on Line 1, the oldest and busiest, with some 725,000 daily passengers. Both lines are equipped with protective, transparent platform-edge screens with automatic doors, to prevent anyone from falling accidentally or jumping onto the tracks. The driverless trains will presumably help to spare passengers the long-familiar disruption of strikes. Today this “network is denser than any other in the world;” claims the RATP, “nowhere in Paris is more than 500 meters from a metro station.”

From the France Today archives; updated in September 2015