My Life in Paris: Girl Racer 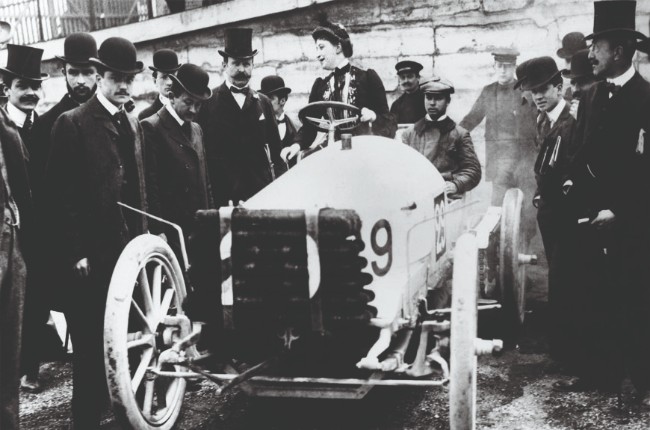 I can do anything! I tell myself, as I pound the trottoir juggling two moon-sized pizzas, still smoking hot. I know I’ve over-ordered, but how could I not, after watching La Pignatta’s owner tease a ball of dough with his rolling pin before throwing the flying seductress overhead without hitting either ceiling fan or floor? Mesmerised, I’d begged him for another.

“This one with an egg on top, please!” I’d said, because my dreams are always made of capers, tomatoes, basil, olive oil, and cheese– with theatrics. Rising to the occasion, and to the help of my friend Stéphanie whose spirited daughter Lison had been acting extra feisty, I’d volunteered to fetch some old-fashioned comfort food.

Which is how I’ve ended up fighting my way through the pouring rain,
burdened not only with two massive pizza boxes but five salads and a bottle of vin rouge from Monsieur Valentine’s cave – after all, Stéph needs a treat, too. She lives only 20 minutes away by foot, but because I’d like to arrive with pies still dry, I leap on an idling 95 bus just before it departs.

“Merci, Madame!” I shout to the driver from the back of the folding bus.

We’re off and snaking along the tight rues near Montmartre Cemetery. I annex a spot by the door of the jam-packed bus and flex my knees to absorb the bouncing of its rear suspension. Suddenly my dinner plans screech to a halt. A city trash truck is blocking our path. Despite our driver’s honking, workers are nowhere to be seen. My arm muscles are screaming, but I hold my pies high, trying to ignore the curious looks and dirty glances of fellow passengers. 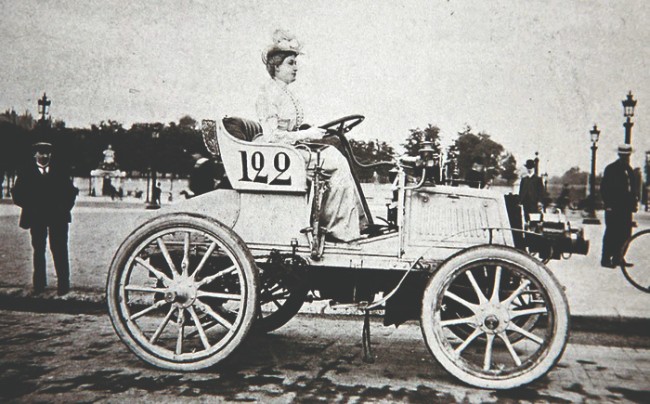 I can’t blame them. The entire bus smells like a pizzeria. Feeling pangs of guilt and hunger, too, I fantasise about commandeering the trash truck and saving the day. But who am I kidding? My knees knock during mere bike rides. Sure, I was able to brave the Place de la Concorde during a recent rush hour, but only with prayers and post-exploit sobbing. If pushed again, could I summon the spirit of Camille du Gast, the erstwhile balloonist who became one of France’s very first female auto racers?

Roused by the 1900 Paris-to-Lyon race, Camille registered for the 1901 Paris-to-Berlin rally despite officials’ efforts to ban her from competing on account of her gender. Fast like her Panhard roadster, the “pluckiest woman in the world” finished 33 out of 129 male racers – while wearing a corseted jacket.

“Every time a stage was accomplished, and the racers appeared at a public hotel for dinner, the wonderful Camille would enter the salle à manger in a new evening frock. “She never wore the same gown twice!” the newspapers gushed.

“Might as well be dead as commonplace!” she shot back. The rush of racing was surely addictive, but she wasn’t just grandstanding for glory. She was also fighting for women’s rights; specifically, the right to a driver’s licence in France. At the time, she was one of just two women with a permit. “If more women took to driving automobiles they would make the sport more civilised!” Du Gast would say. Her enthusiasm was contagious. Accounts of Camille’s adventures had a ripple effect. By 1903, 100 rebels had obtained licences. By WWI, the number had rocketed to 3,000. After military training, many were hired as chauffeurs and mechanics to transport wounded soldiers from the front.

My war reveries are suddenly interrupted when our bus begins to move. Honking having failed, our driver has become proactive. With a precision at the wheel I’ll never know, she manoeuvres the articulated bus around the still-stalled truck centimetre by centimetre, finally completing the feat without damaging either vehicle or my pizzas. The crowd cheers. At last I make my exit and sprint to Stéphanie’s place. Sipping wine, we watch Lison enjoy her very first slice of pizza. The warm cheese and chewy crust render her uncharacteristically quiet for a solid ten minutes before she bounces back to her chatty self. And that’s okay. High-spirited women are exactly what the world needs today. Pizza, too.