A Slice of Château Life in Nice 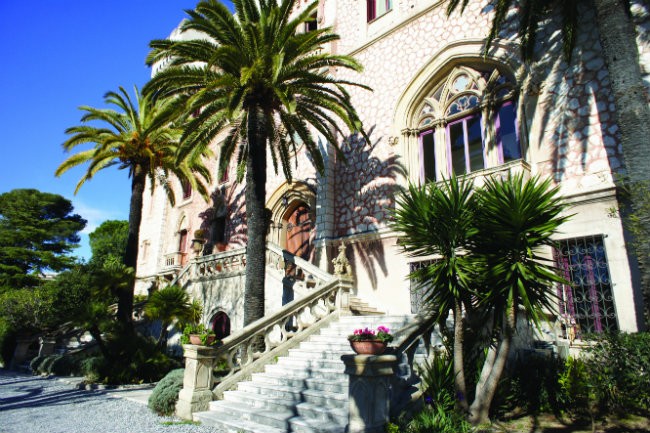 Eyebrows are raised when I tell people that my parents live in a château in Nice. Incredible as it may seem, their inner-city apartment is in a manor house built in 1850, in the style of a Gothic castle. It’s a five-minute walk to the city beach and they’re also fortunate to have some of Nice’s best boulangeries on their doorstep.

This was only the second apartment my parents saw when house-hunting and they bought it immediately. As my mother says, somewhat insouciantly, they bought the apartment for Rosie the dog as it had a garden.

As is fitting for a folly, the château has a colourful history. It began life as a house with grounds which stretched almost as far as the Med. In those days, the west of Nice, then just a small town, was rural and undeveloped. Around the turn of the century, an Italian Count and his American heiress wife moved in. They both died young, as did their daughter, who passed away aged just 18. The story is that the girl was buried in the floor of the château’s old chapel, which is now an apartment. True or not, it adds to the mystique of the place.

Driving through the gates, you’re met by a gruesome statue of a lion wrestling a crocodile. This pretty much sets the tone for the Hammer-horror architecture of the place. Eccentric as it is architecturally, the château is very typical of Nice. In many respects it’s just another apartment building, albeit with turrets and frescoes, inhabited by a disparate group of residents who rub along together. Unlike many cities that have pushed locals and less affluent people out to their peripheries, Nice still mixes everyone up.

The château’s residents include a doctor, a lawyer and absentee Russian owners. But there’s also an exotic dancer and a scruffy man with many cats who plays the piano beautifully – he was once the répétiteur (rehearsal pianist) for Les Ballets de Monte-Carlo. Not so long ago, there was an incident with an owner (who’s now thankfully left), a gun and alleged Mafia connections. A well-known person in local politics rented here until recently and his bodyguards would drive him to the door of his apartment – the most you’d catch was a glimpse of a foot.

Inevitably, Nice’s main tourist areas are slowly beginning to lose their local edge as gentrification takes over and second-home owners move in. The Old Town, for instance, was once the poorest part of Nice and thought of as a dangerous place. Today you cannot move through the narrow lanes without encountering a new trendy restaurant. The Port of Nice is heading in the same direction.

There’s still a die-hard group of Niçois who live in the Old Town, usually in rent-controlled apartments, but time will move them on soon. Their dark and poky apartments are likely to be given the usual make-over, with the internal walls removed to make way for open-plan living.

However, so long as there are inner-city castles which have been turned into higgledy-piggledy apartments there’s a sense that Nice is still inclusive – a place where real people live, not just visit. The neighbours may be a mixed bunch, but the locals hope it stays that way.

Originally from New Zealand, writer Rebecca Russell lived in Hong Kong and London before moving to Nice with her family, to work as a property finder.