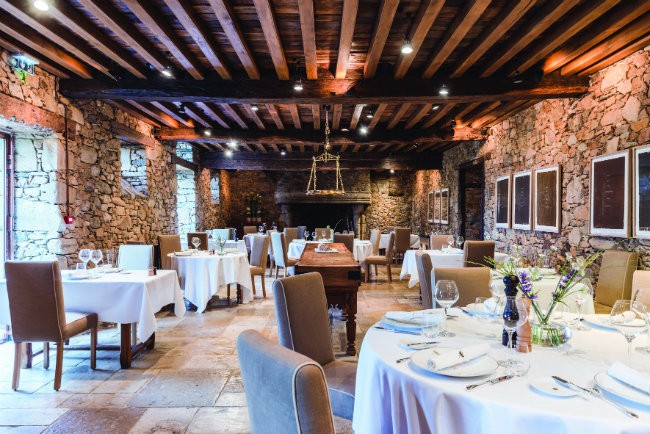 The restaurant Dyades at this magnificent new hotel in one of the least-known corners of France – the Charente Limousine, which is located between Angoulême and Limoges – offers an excellent reason to discover this remarkable place. Owner Garance Primat recruited chef Fabien Beaufour – who began his career with Anne-Sophie Pic in Valence and eventually went on to cook with Daniel Humm at New York’s much-lauded Eleven Madison Park– from the Oblix Restaurant in London’s Shard Tower.

“I have a lot of freedom here, plus the pleasure of cooking for a small, sophisticated and constantly changing clientele,” says Beaufour, 31. “What especially appealed to me about this position is that there are no limits – the fil conducteur [guiding thread] of my job is to make the clients happy, whether they want a sumptuous gastronomic meal at Dyades, a picnic in the middle of the woods or a catered barbecue in one of the métairies [farm houses].”

The hotel has seven rooms in the main château building plus seven renovated métairies which are scattered across the surrounding 2,400-acre estate.

Beaufour’s cooking highlights the estate’s own produce, including vegetables and herbs from its huge garden and beef from the Limousin cattle which roam its pastures. There are three different menus: €55 for three courses, €75 for four and a tasting menu of eight-to-twelve courses at €120.

In June I met a friend who works for one of Limoges’ big porcelain producers for lunch at Dyades. Our meal in the attractive, beamed dining room with its exposed stone walls began with a beautifully executed and very original composition of lobster and steamed carrots in carrot-ginger juice.

“The whole region’s aflutter over the arrival of such a seriously talented chef,” my friend remarked, as we tucked into our second course – sea bass with an intriguingly delicate sauce of fresh maize jus. The vegetal sweetness of the grain beautifully flattered the natural flavour of the fish without overwhelming it.

Next, an impeccably cooked miniature rack of lamb was anointed with a delicious crust of puréed Iranian black garlic and came with garnishes of fava beans and mashed potatoes. This was followed by an exceptionally good cheese tray, then a composition of seasonal red fruits, including strawberries and currants, which was garnished with crumbled meringue and a luscious red-fruit sorbet.

Dyades’ young serving staff added to the pleasure of the meal, as they so clearly enjoy their work and, happily, haven’t fallen victim to the stuffiness or hauteur which can often characterise ambitious provincial French restaurants such as this.

Previous Article Museum Watch: The Musée Rodin Reopens in Paris
Next Article The Buzz in Evian: Life’s a Beach by Photographer Martin Parr