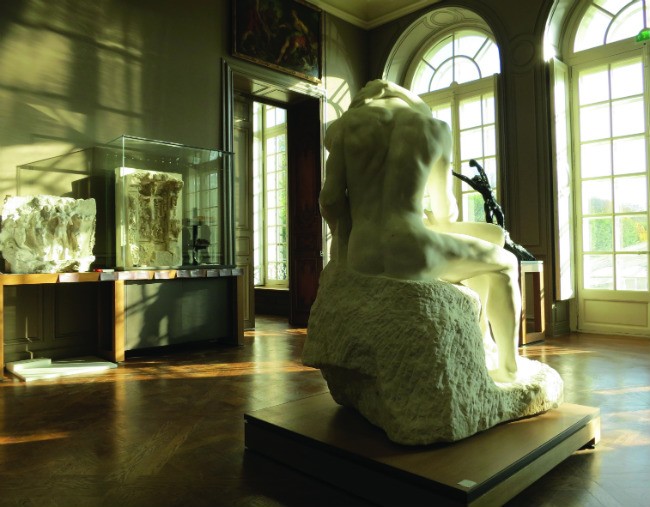 Czech-born poet Rainer Maria Rilke, who had worked as Auguste Rodin’s secretary, first told the sculptor about the Hôtel Biron in 1908. “You should see, my dear friend,” he wrote, “this beautiful building and the halls that I live in, with three prodigious windows onto an abandoned garden, where you can see rabbits hopping through the trelliswork as in an ancient tapestry.”

The then-neglected, 18th-century mansion was being threatened with demolition and had been temporarily divided into apartments, which were leased at a low rent. Rodin moved in, sharing with such tenants as Jean Cocteau, Matisse and Isadora Duncan. Although Rodin did some work at the Hôtel Biron, his main atelier was located in nearby Meudon, and he mostly used the address to hold court with fans, journalists, dealers and collectors. When the property was officially acquired by the French state, all of the tenants were evicted except Rodin who, determined to save the mansion, devised a somewhat cunning plan.

“I give the State all my works… as well as my collection of antiquities,” Rodin wrote. “All I ask is that they will be kept in the Hôtel Biron, which will be the Musée Rodin, reserving the right to reside there all my life.”

This was an offer that France couldn’t refuse and the museum opened in 1919. Fast-forward to the 21st century and the Musée Rodin, which was welcoming more than 700,000 visitors per year, was sorely in need of a complete overhaul – one beyond just a ‘fresh coat of paint’, as no structural reinforcement had been made when the mansion was turned into a museum, which saw the sculptor’s heavier works causing issues.

A three-year, €16-million renovation ensued, which tackled the electrics, structure, security and improved accessibility – the latter included the fitting of an all-important lift, which isn’t a simple matter in a house built in 1732.

The sun still floods through the reopened mansion’s floor-to-ceiling windows, but now an intelligent lighting system adjusts automatically to variations – even caused by a passing cloud – to provide optimal intensity and warmth, in order to show Rodin’s white marble and dark bronze works to their best advantage. A new curatorial narrative provides an enlightening insight into the artist’s creative process and the language of ‘plasticity’.

Rodin’s clay models and plaster casts have come out of the museum’s reserve collection, to claim their place alongside the final versions, as have his collection of Greek, Etruscan and Roman antiquities, which he dotted around his atelier – a torso here, a foot there – for artistic reference.

Great care has been taken to provide a sense of a ‘state of Rodin’, down to a section of the Pavilion de l’Alma, which he masterminded at Paris’s Exhibition Universalle of 1900 – it’s as if he could stride across the mansion’s handsome halls at any moment…

In addition, some elements of the original mansion which had been sold off before Rodin’s day – such as the splendid, 18th-century panelling in the round room – have been recovered and reinstated to their original splendour.

TIP: The Sculpture Garden, a slice of heaven in central Paris, is at its best during May and June, when thousands of roses are in bloom.