Barrière in Cannes: Hot Hotels for the Famous Film Festival 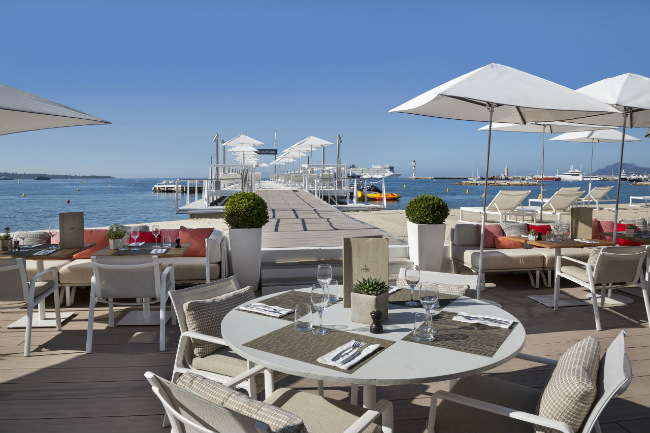 If you’re heading to the Cannes Film Festival this year, then the Barrière Group’s luxurious hotels, Le Gray d’Albion and the Hotel Le Majestic, make a good choice for a weekend of star-spotting or relaxing in the Mediterranean sunshine.

The contemporary and modern sister of the iconic Le Majestic, Le Gray d’Albion’s understated design and location offers guests a more private stay than its star-studded neighbour. Situated a few minutes away from La Croisette, it’s ideal for those looking to step back from the action of Cannes, whilst still taking in sea views and fantastic vistas from the comfort of your room. A pared-down colour palette and transparent furniture courtesy of Philippe Starck is a calming backdrop suited to the privacy of the hotel, while the vibrant artwork in the lobby adds an energetic edge to the design without being overbearing. 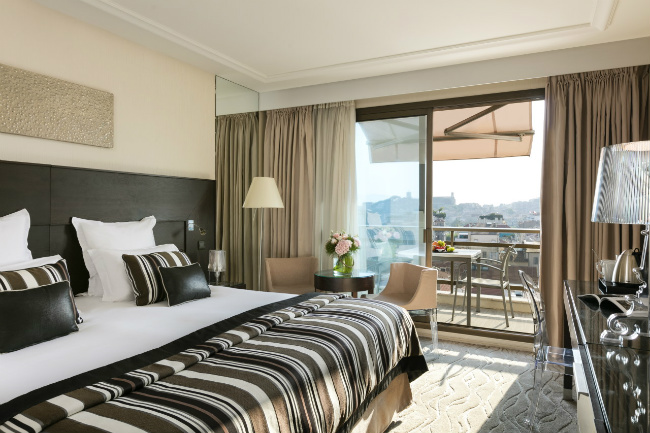 The hotel offers a range of amenities including a fitness room, private beach and café bar, and the chance to indulge in the spa at Le Majestic. But the real star of Le Gray is the secluded outdoor terrace at the hotel’s Mediterranean-style restaurant, La Terrasse du Gray. The restaurant certainly scores points for its fresh and flavourful dishes, but is also a perfect spot for an apéro and one of Cannes’ best kept secret addresses. 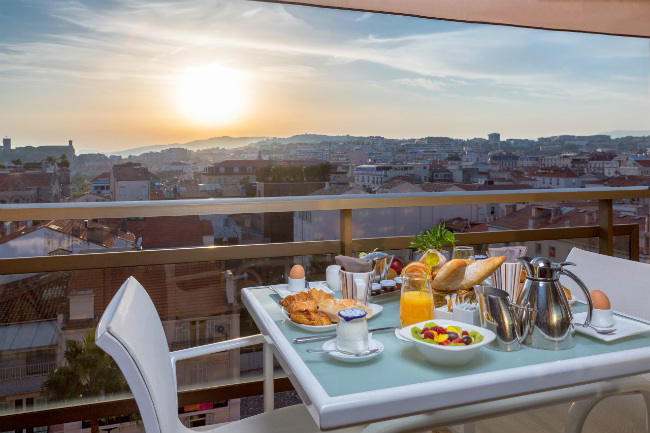 If you’re looking for something glitzier, then head to where the stars will be staying, the famed Hotel Le Majestic. Here Hollywood royalty will most likely be preparing for the film festival in the hotel’s two-floor Suite Majestic, a 450m² dream apartment boasting its own private terrace complete with pool and a breath-taking view over the promenade of La Croisette. Other luxurious additions include a home cinema, private gym, a massage bed for in-room treatments, and even your own private Butler. Naturally luxury of this level is in high-demand, and prices are available on request during the film festival. 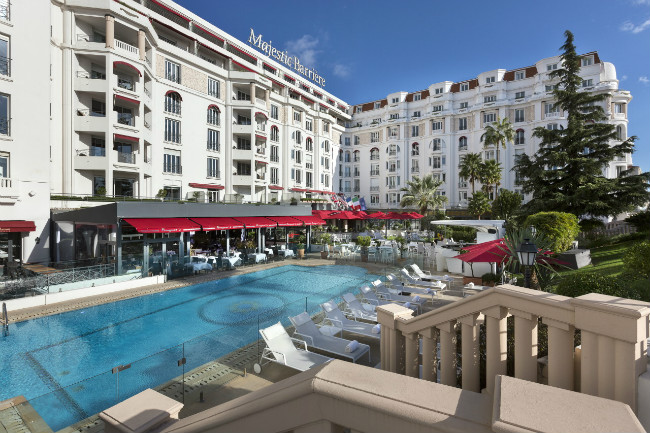 If you can’t sneak a peek inside the best room in the house, then Le Majestic’s remaining suites still offer a suitably glamourous stay, from the Suite Riviera, which invokes the tranquility of the Côte d’Azur in shades of soft cream and blues, to the Dior Suite, designed collaboratively between the fashion house and the hotel. Taking its inspiration from the Dior boutique in Paris, the suite is elegantly furnished in silver and grey velvet, and during the festival will be used as a dressing space for the actresses wearing Dior, who will be prepped and preened by stylists and make-up artists before their red carpet appearance. If you want to catch a glimpse of them, make sure to request a room or suite with view of the red carpet when booking. 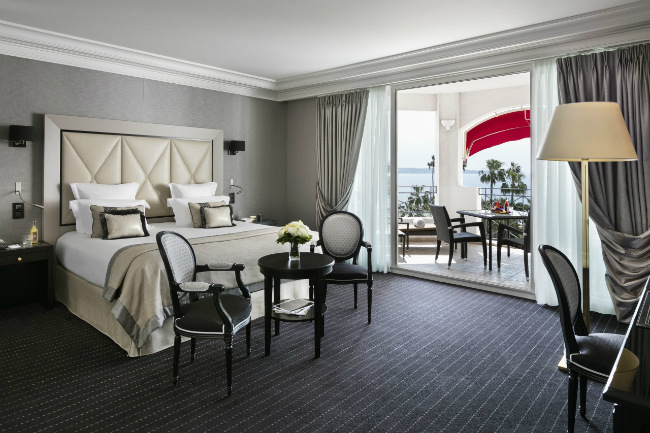 By night, the Bar Galerie du Fouquet’s Cannes and the hotel’s two restaurants are packed during events. In fact, you can feel the buzz of the hotel as soon as you walk into the lobby. This is the place to see and be seen, so make sure you book a table in advance and be prepared to wait for a spot in the bar. It’s worth it, though; the signature cocktails by head bartender Emanuele Balestra are a unique take on the classics, using herbs and plants which are grown on the rooftop of the hotel alongside Le Majestic’s beehives, which produce the fresh honeycomb served at breakfast. 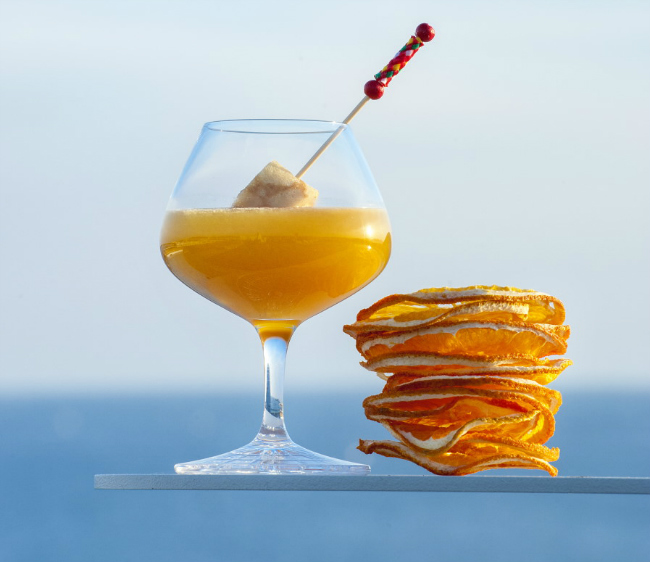 At Le Fouquet’s, Pierre Gagnaire has also put a more modern take on traditional recipes, which are exceptionally well-executed by the team with tender cuts of meat, perfect cooked local fish dishes, and the freshest of vegetables. La Petite Maison de Nicole is Le Majestic’s second restaurant, offering more relaxed dining with a dash of French Riviera flair. Taking its name from entrepreneur Nicole, and inspiration from her own restaurant in Nice, the restaurant serves up a selection of Mediterranean dishes and southern flavours, set to live music on Thursday, Friday, and Saturday night. During the day, Le Majestic’s outdoor pool is a destination point in itself on a summer’s day, not only for swimming but also for poolside drinks and a leisurely lunch on Le Fouquet’s terrace.

The 72nd edition of the Cannes Film Festival begins on Thursday 14 May and ends Saturday 25 May. 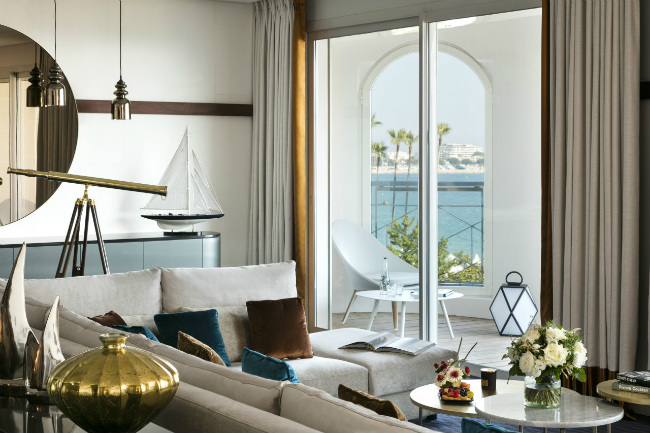 Previous Article Notre-Dame Cathedral: What a Difference a Day Makes
Next Article Remembering Balzac on the 220th Anniversary of his Birth